About: Vector Hyllus has repeatedly expressed admiration for Imperial accomplishments while indicating a desire to spread Imperial influence through diplomatic channels. His attitudes were likely shaped by the Imperial reconstruction of his homeworld and are appropriate for a Diplomatic Service member. Hyllus is obedient, intelligent, charismatic and effective. He is unlikely to advance further within diplomatic or military hierarchies. 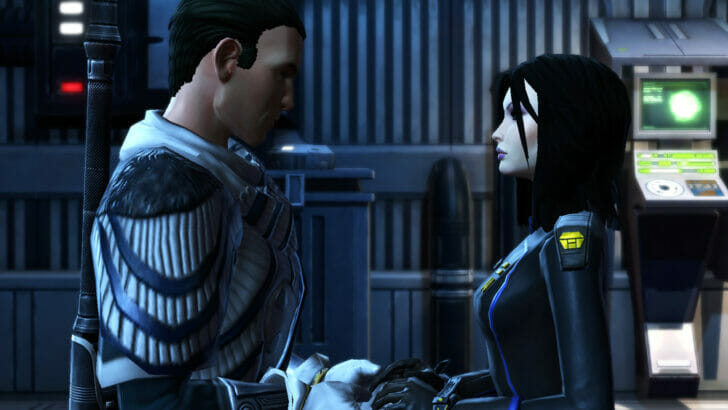 How to continue romance: Players can resume their romance with Vector after completing the Knights of the Eternal Throne expansion and the To Find a Findsman Alliance Alert. Press N on your keyboard to open the Companions & Contact menu. If you have not done To Find a Findsman, pick that one up and complete it first, and then the alliance alert Vector’s Vector will become available in the Companions & Contact menu as long as you have finished Knights of the Eternal Throne. Vector will pledge the Killik’s allegience to the Agent, and that he wants to return to Agent, and the he loves the Agent. The player can reply “I love you, too.” to resume the romance or “I’m sorry, Vector.” to break up. Choosing to resume will have a box pop up that says “This choice will resume your romance with Vector Hyllus. Doing so will end any other romances you may be involved in. Are you sure you want to proceed?” and will lead to a kiss. If the player chooses to break up, Vector will devote himself to making life better for the Killiks.

Romance continuation: After Onslaught, after the Hearts and Minds quest, the player will meet up with Kira and Scourge again. Later, the player can meet with Vector one on one, and discuss Darth Rivix, and they can share a kiss with a [ROMANCE] option and they spend some quality time together.