These mails are sent to your Republic character after completing Echoes of Oblivion.

(I do not have the Imperial ones yet sorry. – Swtorista) 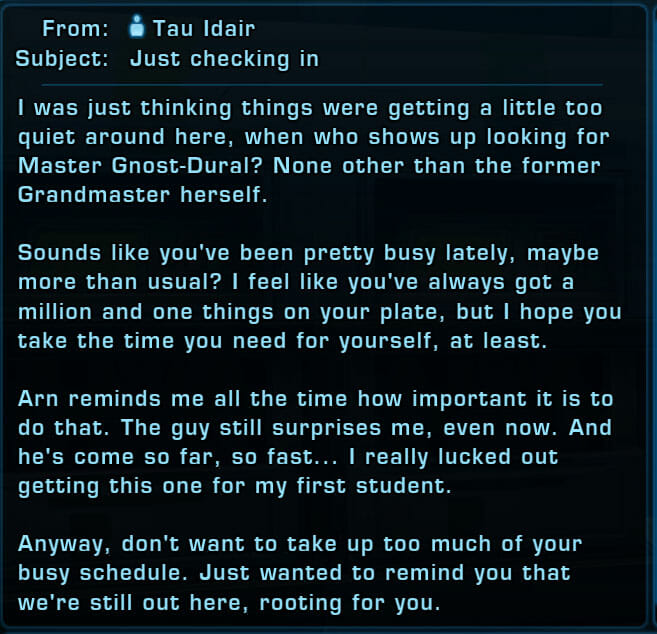 I was just thinking things were getting a little too quiet around here, when who shows up looking for Master Gnost-Dural? None other than the former Grandmaster herself.
Sounds like you’ve been pretty busy lately, maybe more than usual? I feel like you’ve always got a million and one things on your plate, but I hope you take the time you need for yourself, at least.
Arn reminds me all the time how important it is to do that. The guy still surprises me, even now. And he’s come so far, so fast… I really lucked out getting this one for my first student.
Anyway, don’t want to take up too much of your busy schedule. Just wanted to remind you that we’re still out here, rooting for you.

From: Kira Carsen – Subject: Some help, if you want it 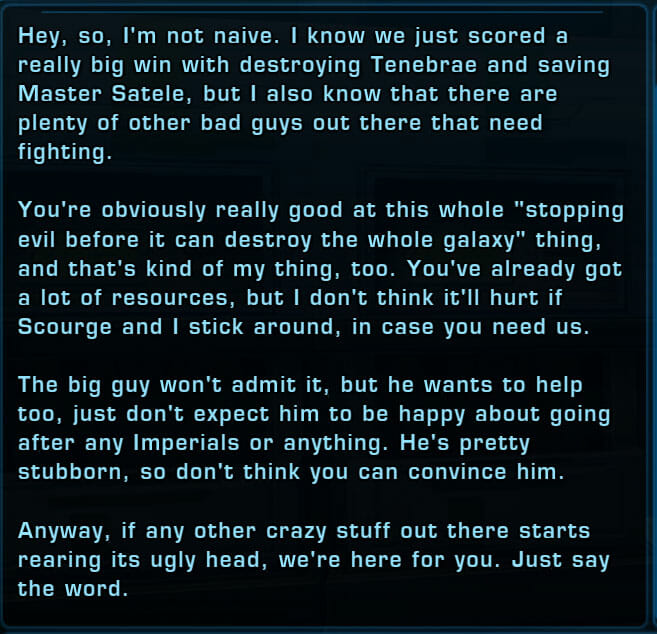 Hey, so, I’m not naive. I know we just scored a really big win with destroying Tenebrae and saving Master Satele, but I also know that there are plenty of other bad guys out there that need fighting.
You’re obviously really good at this whole “stopping evil before it can destroy the whole galaxy” thing, and that’s kind of my thing, too. You’ve already got a lot of resources, but I don’t think it’ll hurt if Scourge and I stick around, in case you need us.
The big guy won’t admit it, but he wants to help too, just don’t expect him to be happy about going after any Imperials or anything. He’s pretty stubborn, so don’t think you can convince him.
Anyway, if any other crazy stuff out there starts rearing its ugly head, we’re here for you. Just say the word. 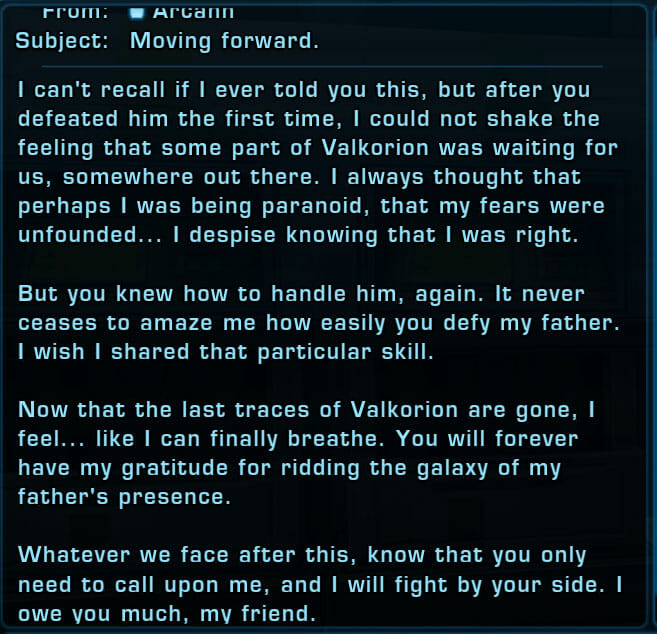 I can’t recall if I ever told you this, but after you defeated him the first time, I could not shake the feeling that some part of Valkorion was waiting for us, somewhere out there. I always thought that perhaps I was being paranoid, that my fears were unfounded… I despise knowing that I was right.
But you knew how to handle him, again. It never ceases to amaze me how easily you defy my father. I wish I shared that particular skill.
Now that the last traces of Valkorion are gone, I feel… like I can finally breathe. You will forever have my gratitude for ridding the galaxy of my father’s presence.
Whatever we face after this, know that you only need to call upon me, and I will fight by your side. I owe you much, my friend. 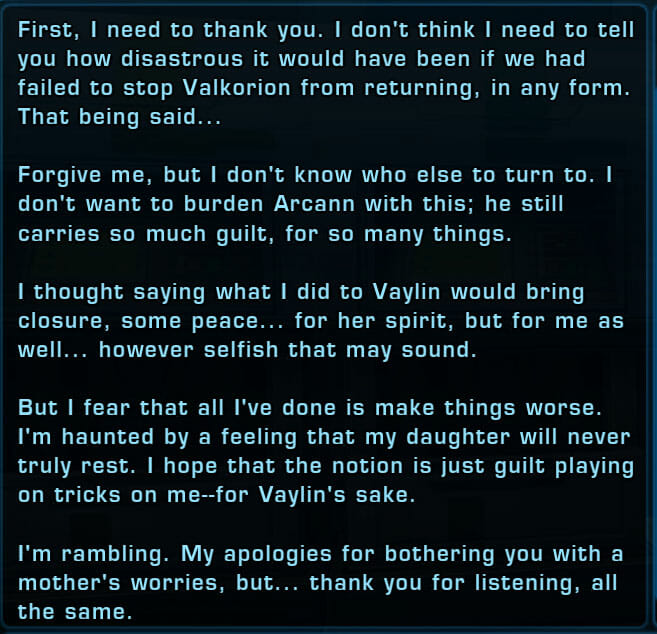 First, I need to thank you. I don’t think I need to tell you how disastrous it would have been if we had failed to stop Valkorion from returning, in any form. That being said…
Forgive me, but I don’t know who else to turn to. I don’t want to burden Arcann with this; he still carries so much guilt, for so many things.
I thought saying what I did to Vaylin would bring closure, some peace… for her spirit, but for me as well… however selfish that may sound.
But I fear that all I’ve done is make things worse. I’m haunted by a feeling that my daughter will never truly rest. I hope that the notion is just guilt playing on tricks on me–for Vaylin’s sake.
I’m rambling. My apologies for bothering you with a mother’s worries, but… thank you for listening, all the same. 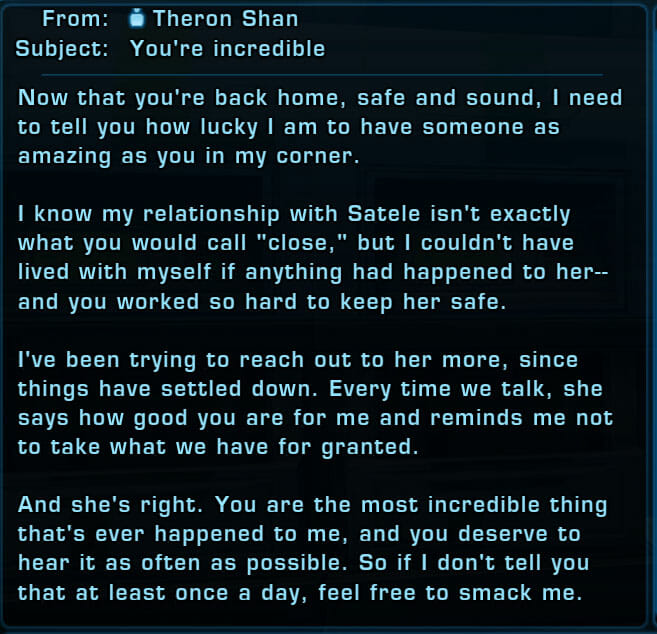 Now that you’re back home, safe and sound, I need to tell you how lucky I am to have someone as amazing as you in my corner.
I know my relationship with Satele isn’t exactly what you would call “close,” but I couldn’t have lived with myself if anything had happened to her–and you worked so hard to keep her safe.
I’ve been trying to reach out to her more, since things have settled down. Every time we talk, she says how good you are for me and reminds me not to take what we have for granted.
And she’s right. You are the most incredible thing that’s ever happened to me, and you deserve to hear it as often as possible. So if I don’t tell you that at least once a day, feel free to smack me.

From: Satele Shan – Subject: An update. 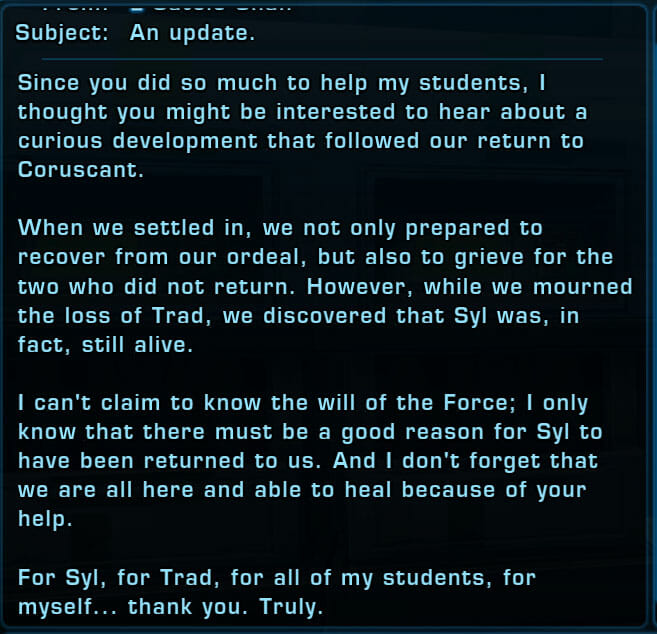 Since you did so much to help my students, I thought you might be interested to hear about a curious development that followed our return to Coruscant.
When we settled in, we not only prepared to recover from our ordeal, but also to grieve for the two who did not return. However, while we mourned the loss of Trad, we discovered that Syl was, in fact, still alive.
I can’t claim to know the will of the Force; I only know that there must be a good reason for Syl to have been returned to us. And I don’t forget that we are all here and able to heal because of your help.
For Syl, for Trad, for all of my students, for myself… thank you. Truly.