⚠️ This lore article contains major spoilers for the Knights of the Old Republic comic books, including a major plot twist and a large chunk of the initial plot of the comics.

The Jedi enclave is meant to be one of the safest places in the galaxy – a haven of peace, built in a location with a strong connection to the light side of the Force. The Jedi would go incredible lengths to protect that peace – and in this tragic story, even go as far as to kill their own Padawans.

Zayne Carrick was a young Padawan who lived during the Old Republic era. Although he only had a marginal connection to the Force as a child, his masters admired how he formed kinships, and believed with training, he’d develop into a valuable addition to the Jedi ranks. As a teenager, Zayne Carrick often found himself running into trouble, and his Masters would even joke that to find him, all you needed to do was to follow the trail of debris. Zayne’s luck often ranged from barely tolerable to cataclysmic – and this incredible luck would cause him to be the only remaining survivor of his Jedi Padawan cohorts.

As a Padawan on the cusp of knighthood, Zayne’s training took place during a time of upheaval in the Old Republic. Although the Sith were seemingly gone, war with the Manadalorians loomed on the horizon, and with so many Republic forces at the front, many worlds teetered on the edge of lawlessness.

With their main forces poised for battle, the Republic attempted to rely on the Jedi to maintain order – but many Jedi believed that their true enemy was the Sith, and that their only purpose in the galaxy was to stop their inevitable return.

During the Padawan’s trials on a rogue moon in an asteroid field, their Jedi Masters gathered at the far end of the moon’s valley, meditating as they awaited their Padawan’s passage through the perpetual bombardment of the moon’s surface.

Under their shield, with the weight of open space pressing down on them, the Masters meditated and had a vision that would change the fate of the Jedi Order.

Terrible visions of war, death, and destruction invaded the minds of the meditating masters. Their temple burning, Mandalorians and Sith attacking, the Republic fleet firing on itself, and the Jedi defenseless to stop them. One Jedi Master however, had a much more distinct vision – as a Miraluka, she did not have eyes, and instead saw the world only with her force Sight… and burning bright in her vision was the destruction of Coruscant, Jedi dead at every turn, her beloved Master dead before she could reach her, and the Order and the Republic in flames. 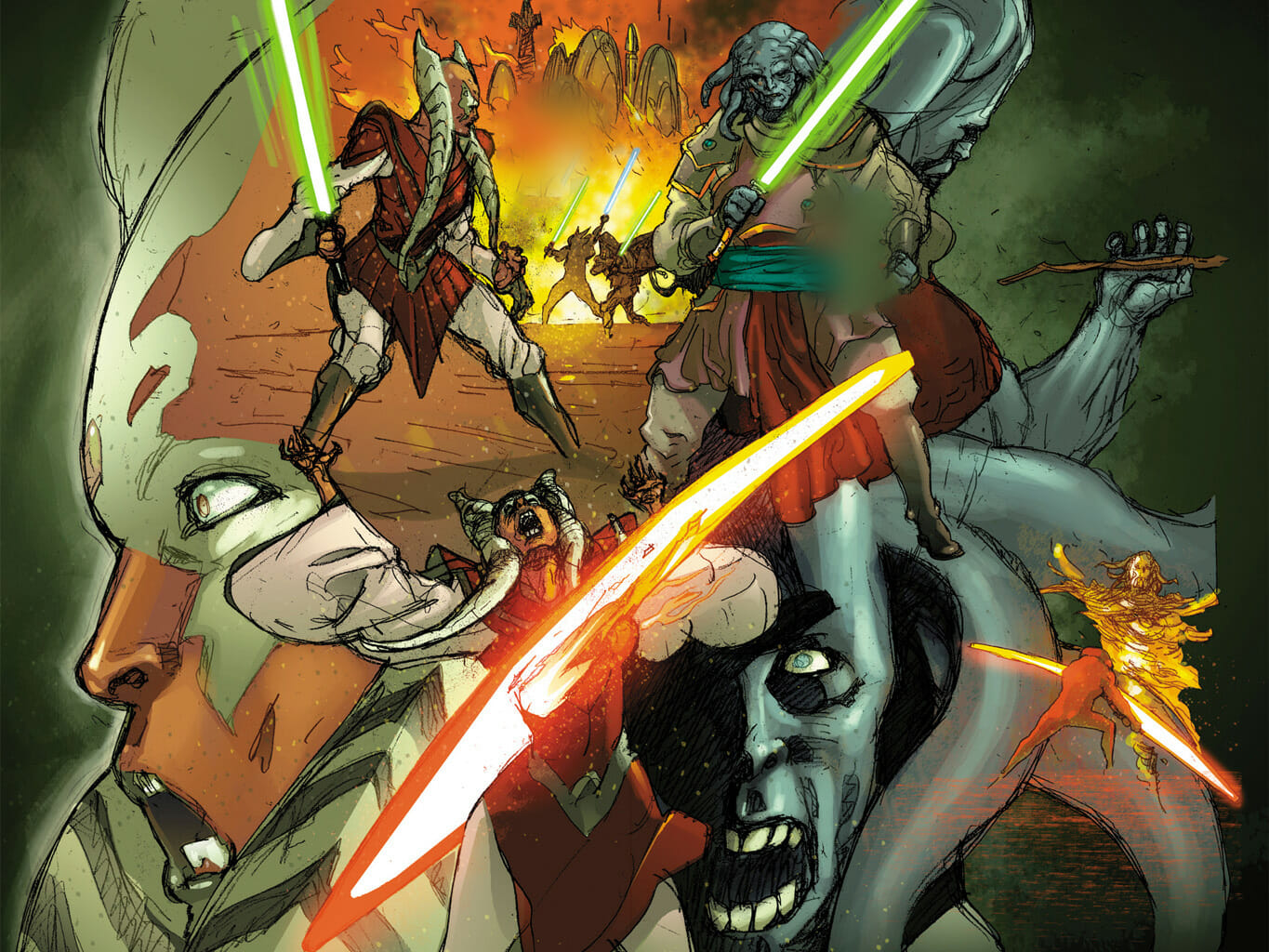 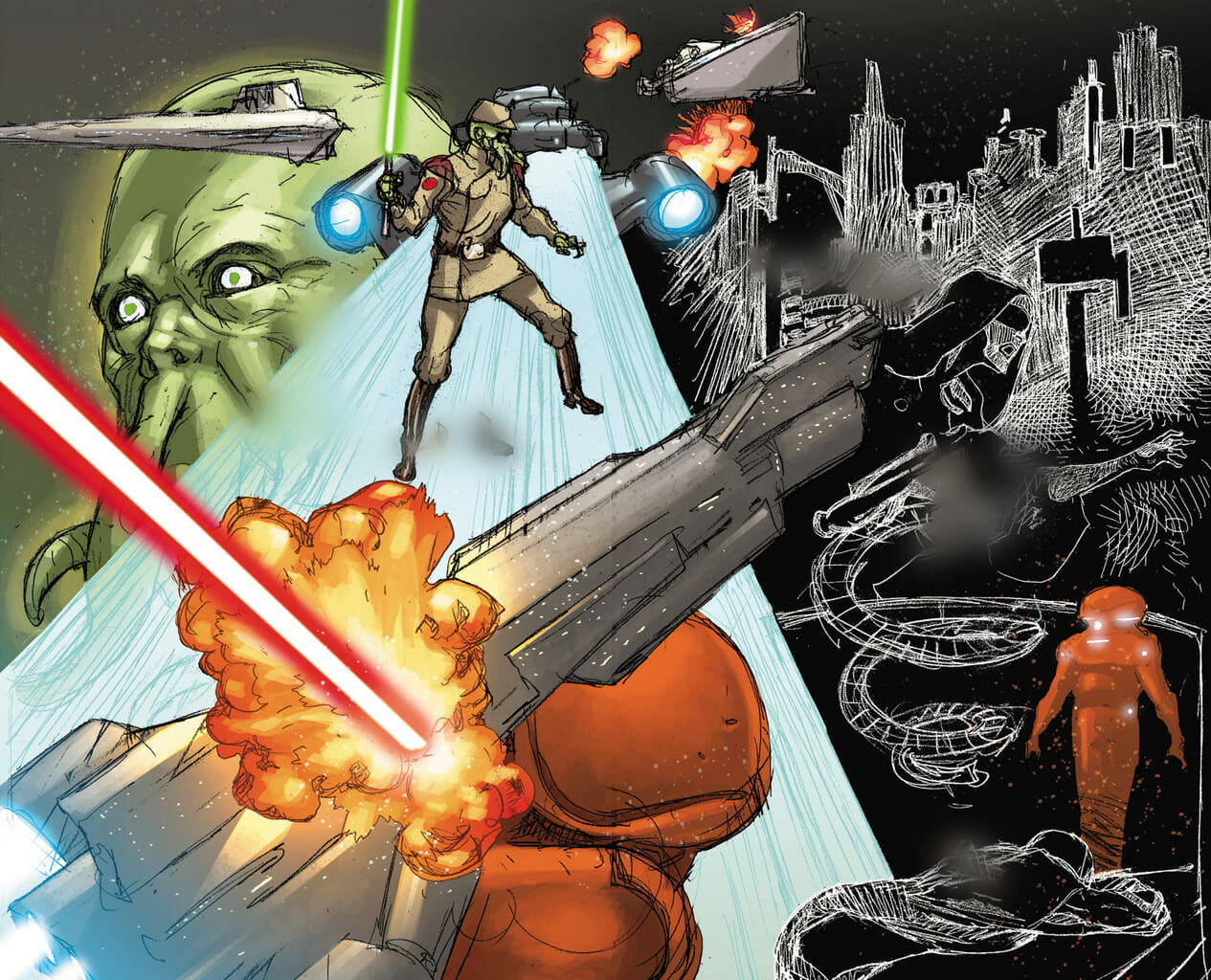 Their visions only shared one thing in common – a figure in red armor, at the very center of the massacre that was to come, leading the vanguard in the return of the Sith and the mandalorian’s push into Republic space. 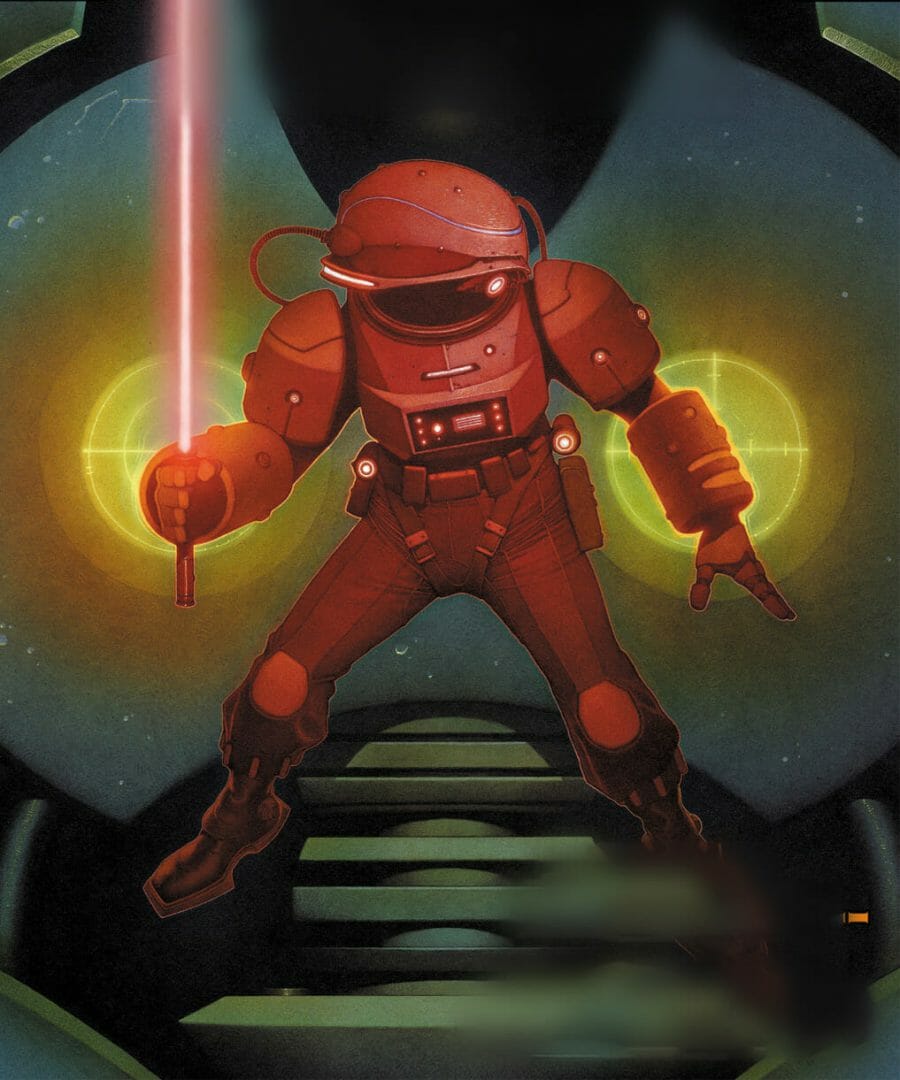 The masters quickly realized the suited figure was not what it first appeared – it was not an unknown foe in armor, but instead a vision of a figure in an environmental suit, just like the ones their Padawans crossing the valley below were wearing.

On the Rogue moon, this obsession with stopping the Sith at all costs would also be passed on to the Jedi Masters as they received their terrible vision.

Surely, their five Padawans, who wore the same environmental suits as the red figure in their visions, were related to the shatterpoint that would cause the fall of everything they stood to protect. 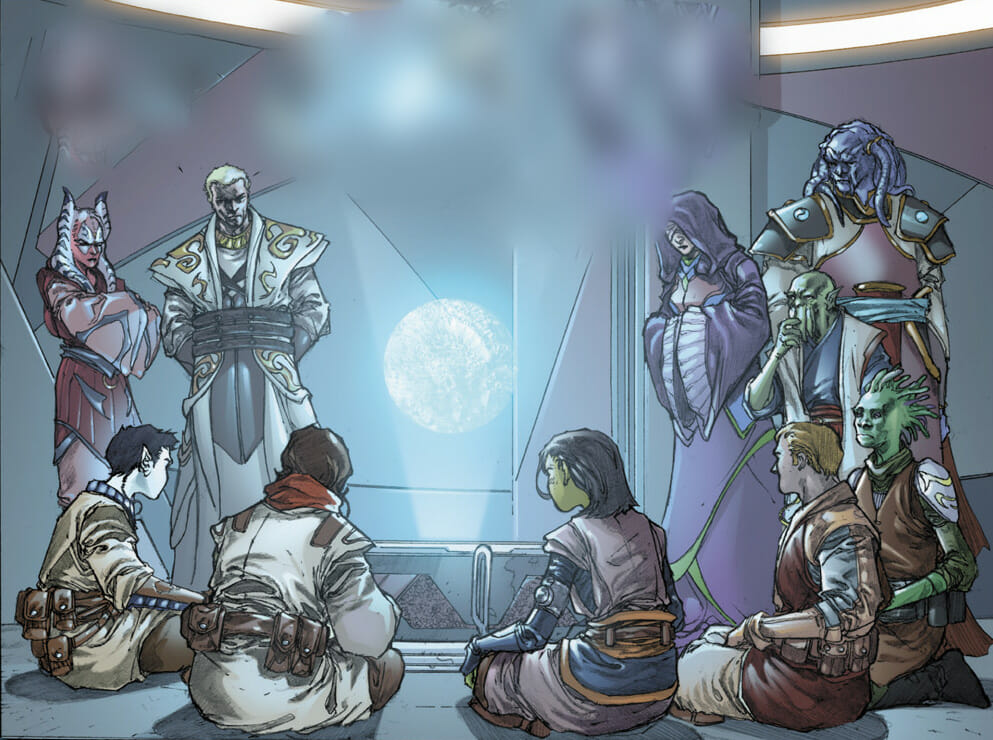 With the future of the galaxy resting in their hands, the Jedi Masters had to make a choice. They could slaughter their own Padawans, leaving their corpses on the moon, or return to their temple and confer with the Jedi Council.

While none of the Masters doubted what they saw, the Masters on the Moon felt that the Council’s dedication to Neutrality during the lead up to the Mandalorian invasion would cause them not to take the vision as seriously as the Covenant treated it – and that if a Sith Lord walked right up to the Council, they’d lecture him about neutrality. The Masters believed that the Covenant existed to do what the council couldn’t – or wouldn’t, to preserve the Jedi Order.

Once the Masters returned to Taris, they had settled on a plan to save the galaxy – they would pin the blame for their students’ deaths on a rejected Padawan, and then also kill him in ‘self defense’, permanently ending the threat to the galaxy.

The Covenant believed that preventing the return of the Sith was what they had trained and prepared for, and that they couldn’t let their personal bonds to their padawans stop them.

Even with their hearts hardened enough to defeat their young Padawans, their cold-blooded plan was thrown awry by the same power that guided their vision – one of their padawans, headstrong in the Force, sensed that his Masters were lying, and demanded to be told the truth. This Force sense accelerated their plan to kill the innocent Padawans, and their intervention for the sake of the galaxy occured before their final Padawan could arrive at the Knighting ceremony – in fact, if not for the the brave demands by this Padawan for the truth, combined with Zayne Carrick’s catatrophic luck that caused him to be late, the Jedi Master’s plan to murder their innocent Padawans would likely have succeeded without any doubt ever being cast against the Jedi Masters’ noble reputation.

Zayne Carrick had not originally the target to take the fall for the deaths of his fellow Padawans, but the Jedi Covenant was able to use his timely escape as a way to convince the Jedi Council that he had help, from the power of the Dark Side, able to escape from 5 Jedi Masters against all odds.

The Masters chased Zayne down relentlessly, convincing both the Jedi Council and the entire Republic, that a murderous padawan had escaped, and needed to be re-captured at all costs. Zayne Carrick eventually turned himself in, knowing that the Covenant would kill his friends to protect their watch over the galaxy. As Zayne accepted his fate at his own Master’s hands, the rogue Moon prophecy manifested.

A figure in a red environmental suit crashed into the Jedi Order’s tower, rescuing Zayne, and setting the building ablaze. This rescue was not orchestrated by the Sith menace, instead, was his compassionate friends freeing him from certain death.

One by one, Zayne hunted down the Masters who murdered their Padawans, and one by one they died, leaving only his own master, Lucien Draay, alive in the end.

Master Raana Tay, followed her nightly terrors in pursuit of Zayne. As prophesied, she was killed on Taris, her visions of Mandalorians and saber-wielders attacking the temple coming to pass. Her corrupted vision did not show her that the death and destruction would be caused by her own obsession with touching Zayne, and the destruction of the Jedi Temple was caused by her own rampage. Her death came at the hands of her former Padawan’s sister, killed by her own fallen Padawan’s blue lightsaber.

Master Feln, in an attempt to prevent Zayne from reaching a hidden cache of Sith artifacts, destroyed it with a detonator charge, but in the end was the one who destroyed his own village with the explosion. His prophesied death came at the hands of his own people, their traditions sundered with the destruction of their sanctum, and their way of life.

Master Xamar, the seer most outspoken against the Padawan Massacre, knew he would die by friendly fire at the hands of the Republic fleet, but went knowingly to his death. After feeling the death of his fellow Masters, he knew he could not run from it, and instead faced the truth head-on and helped the young Padawan Zayne Carrick, bringing him into the heart of the Covenant, and in the end succumbing to the friendly fire on the Covenant’s headquarters. 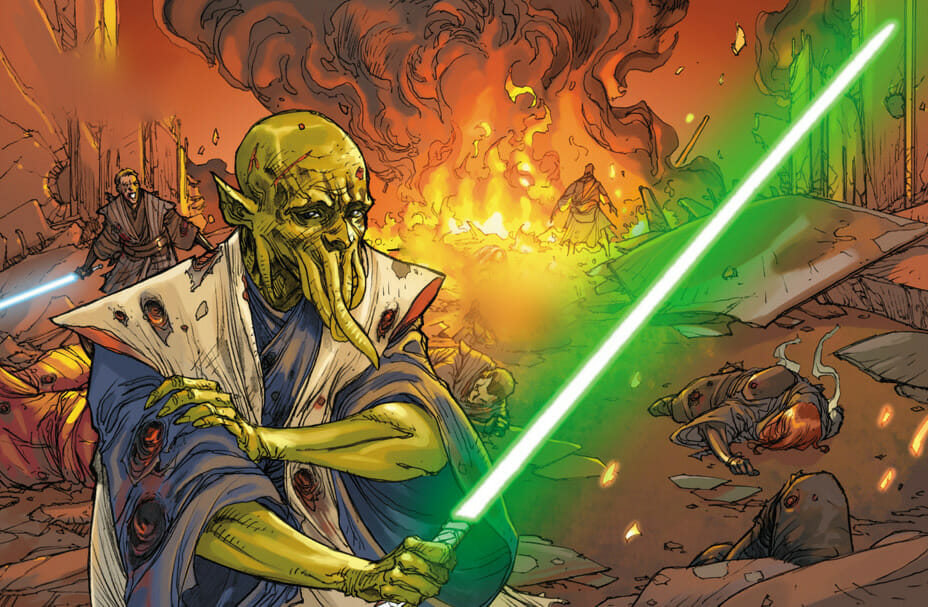 There, Master Q’Anilia, returned to her home on Coruscant, to find her Master locked in a glass casket, seemingly lifeless. Q’Anilia reached out with the Force but was unable to feel her Master, even her Miraluka senses failing her. In her despair at finding the final vision of her Masters’ death true, all her fellow Seers dead, and arriving too late to save her adopted mother and beloved teacher, Q’Anilia took her own life with poison. 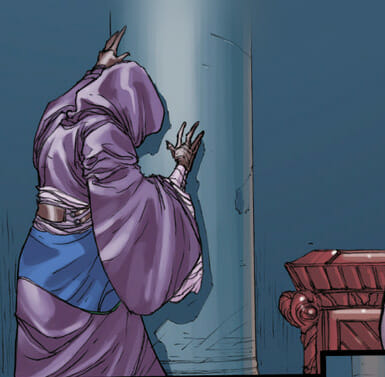 If this Star Wars story interests you, I highly recommend to pick up the Knights of the Old Republic comics – there’s a lot of twists and turns to the Jedi Prophecies that didn’t make it into this video that I’d love for you to experience yourself. 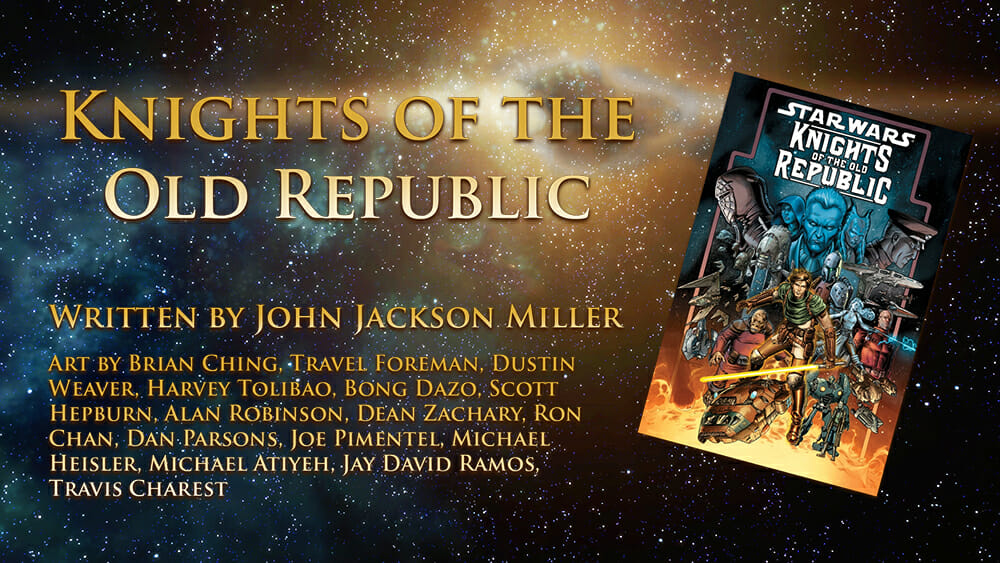