The 7.0 SWTOR Legacy of the Sith Expansion is here! It will be launching on February 15, 2022 and here is a huge list of the questions we’ve been compiling about it. Most can’t be answered until the expansion launches, and this list will help us get answers quickly when it does!

When was the expansion released?

How much does the expansion cost?

You receive the expansion without extra cost if you are a subscriber on or after December 14, 2021. You do not need to purchase it separately or pre-order it in any way.

What happens if I subscribe for the expansion, then unsubscribe the next month?

You should retain access to the story/expansion, and the ability to get to level 80, but will lose other perks like access to Operations, unlimited credit cap, or other small restrictions.

What do I need to have finished to start the new expansion story?

The Legacy of the Sith 7.0 expansion launched at the beginning of 2022 along with the new combat Styles system. Level 75 players who are caught up with the previous storylines (starting with Ossus and ending with Whispers in the Force) are automatically eligible to start the new short expansion story. There is a separate story Republic and Imperial side, and some saboteur options as well, so it’s worth playing once Republic side and once Imperial side. Unlike the other expansions, you can not skip ahead and start at Legacy of the Sith, even if you are level 75, you’ll need to play everything from the latest storylines starting with Ossus.

If you are call caught up in the story plus are level 75 plus have subscribed to unlock the expansion, and still do not see the quests automatically in your log, check your ship’s terminal for the quest, and then contact support if it still not available.

Is there any reward for being subscribed or logging in the day it is released?

No. This is the first time there was not been any subscriber-specific or launch rewards for an expansion.

Is there a new trailer?

Yes! It is called Disorder. 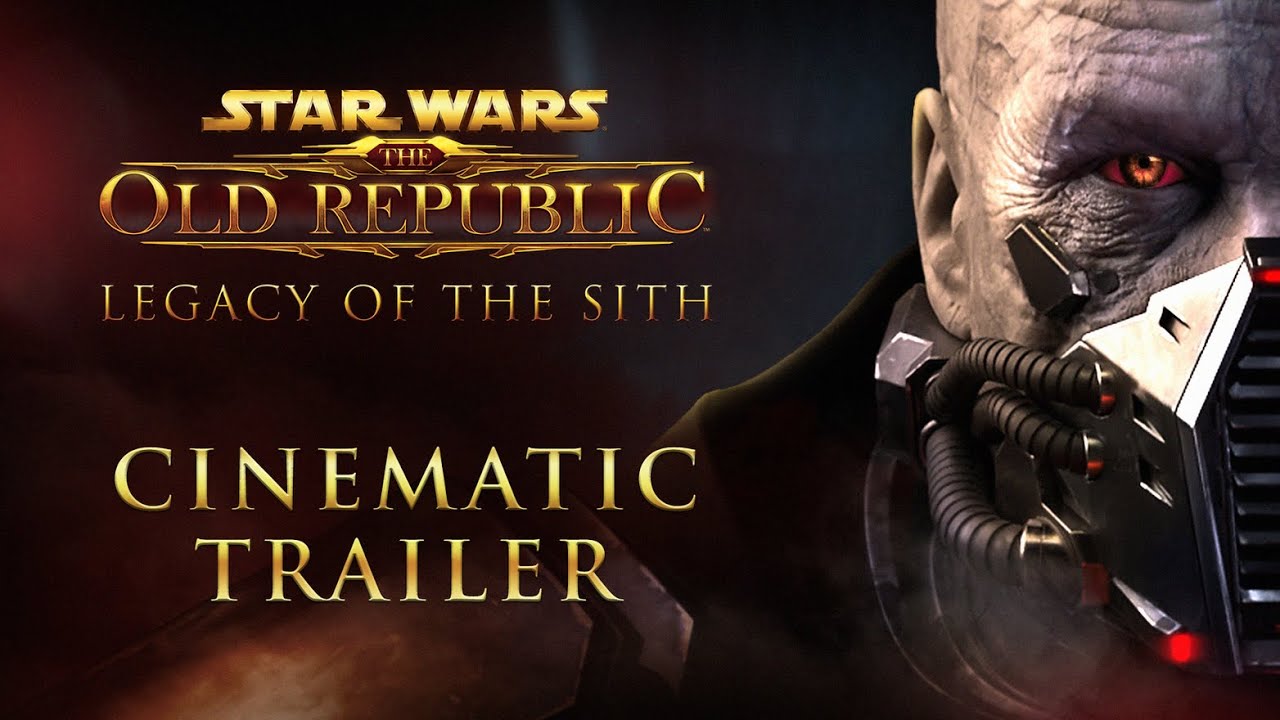 The developers were very kind an answered all my Combat Styles questions directly! I have compiled them on another page: Expansion Combat Styles FAQ

Can a player unlock the Dark combat styles for a Jedi even if they have not reached Dark V in achievements, by buying the Legacy of Sacrifice unlock in the Other tab? Or must they have the Malevolent achievement, which is the Dark V achievement in the Alignment achievements tab?

Legacy of Sacrifice can be unlocked after reaching level 50 and Dark V. It can also be unlocked with 450 CC or upon reaching legacy level 10 with 250,000 credits.

Can a player unlock the Light combat styles for a Sith even if they have not reached Light V in achievements, by buying the Legacy of Unity unlock in the Other tab? Or must they have the Pure achievement, which is the Light V achievement in the Alignment achievements tab?

Legacy of Unity can be unlocked after reaching level 50 and Dark V. It can also be unlocked with 450 CC or upon reaching legacy level 10 with 250,000 credits.

Is there a new character creator?

Does the character creator have any new options/settings?

Yes, but only the new afro-textured hair styles like the Bantu knots and braids we saw on the test server, no other new ones.

Does the character creator let you mix-and-match cosmetic traits any more than it did before? Ex Bounty Hunter tattoos on a Jedi?

What are the names of the quest to start it?

Republic side: Dead in the Water

How do I start the new story?

The Legacy of the Sith 7.0 expansion launched at the beginning of 2022 along with the new combat Styles system. Level 75 players who are caught up with the previous storylines (starting with Ossus and ending with Whispers in the Force) are automatically eligible to start the new short expansion story. There is a separate story Republic and Imperial side, and some saboteur options as well, so it’s worth playing once Republic side and once Imperial side. Unlike the other expansions, you can not skip ahead and start at Legacy of the Sith, even if you are level 75, you’ll need to play everything from the latest storylines starting with Ossus.

If you are call caught up in the story plus are level 75 plus have subscribed to unlock the expansion, and still do not see the quests automatically in your log, check your ship’s terminal for the quest, and then contact support if it still not availa

Are there any restrictions or level requirements to starting the new story?

You definitely need to finish the previous stories and you can’t skip ahead, but I don’t know if there is a level restriction and that’s hard to check as you’d likely be level 75+ if you finished all those storylines already.

How long is the new story?

Very short. Under an hour for each faction.

Are there any saboteur options?

Is there any alliance alerts or other side quests?

At what point can you start the new Flashpoint? Solo, Story, Group?

After finishing Manaan. It has all three options.

Is there new gear for level 80?

How do you get legendary implants?

Here is a guide!

Is there any new ways to get OEM/RPM apart from dropped in Master Mode Operations?

Can you still turn in Tech Frags for OEM / RPM from the datapad in the supplies section of the fleet?

Yes, the quest to turn in Tech Frags for OEM/RPM is still there and it only costs 7,500 which is less than paying the vendor 10,00 Tech Frags.

Are any 6.0 Tacticals still useable or did any get made fully defunct?

Yes but some have been removed:

Are there any new tacticals?

What can I buy with Tech Fragments?

Where can I get Tech Fragments?

See chart on this page!

Is Social now correctly applied across an entire server, based on your highest Social achievement from before the expansion?

How do you gain social levels now that social points are gone?

You earn social points through completing activities in the group finder.

What activities count towards social points?

These only count when run through the groupfinder.

Where are the new Social vendors on the Fleet located?

There is a new vendor in the center of the Fleet, he is not quite in the bar but nearby where all the tables and chairs are. He does not have any new items for sale.

What is the end date for Galactic Seasons Seasons 2?

What are the ten options for weekly quests for Season 2’s first week?

There are ten different weekly quests, a big mix like space missions or coruscant quests or world bosses, your goal is to complete seven of the ten options per week if you can for maximum points, if not just as many s you can that week. There is also a daily that seems to rotate daily and the daily and the weekly is the same for everyone. The daily is the one marked with a little repeatable symbol.

Do these weeklies change each week or stay the same week to week?

Are there any Galactic Seasons dailies?

Yes, you get one daily per day.

Are there any changes to the way the track works in Season 2?

No, it seems to work the same, but there is a new reward called Medal of Commendation x20 that is used for gearing up at level 80.

What rewards are there for Galactic Seasons Season 2?

Here is my info from before the expansion:

While no new PvP maps are being added at the launch of the expansion, all chaos will be unleashed in the PvP scene as the new combat and gearing changes are put to the test. We do have a new tidbit about the PvP revamp coming in 2022 though, and the developers have said, “For those who are already looking ahead to the next season, we have big changes for PvP coming next year in Game Update 7.2. Stay tuned for more details!” So we should be learning more about that after the expansion launch. Since this is the game’s tenth anniversary, it does seem they want to space their big updates out across the anniversary year.

If you are competing in Ranked PvP, be aware that Season 14 is ending on December 14, same day as the expansion launches, so you’ll want to grab your tiers before the expansion. Don’t forget, tokens are no longer season specific. This Season’s reward includes the Unrivaled Guardsman Weapon Set. This new Weapon Set from Season 14 will be offered at a discounted price until the end of the next Ranked Season – so you’ll be able to get it at the discounted price with your rewards granted at the end of Season 14.

You can not change when in q or in match.

How can I see my valor points?

They got moved. They are located on the PvP Queing up tab, if you click the Ranked section.

What are Flashpoints synced to?

Flashpoints (Solo and Solo-Story Mode): Remain at their current level with players scaled down to match.

Flashpoints: (Veteran): Scaled up to level 80. Remain available starting at level 15, with players being bolstered upward.

Flashpoints (Master): Scaled up to level 80 and require level 80 to access.

Uprisings (Veteran): Scaled up to 80, remain accessible at 70, with players bolstered upward.

Uprisings (Story and Master): Remain at level 75 with players scaled down to match.

What are Operations synced to?

All Operations have been scaled to level 80 and require level 80 to enter. Players will be bolstered to 318 item rating in Story Mode.

Is shared tagging working as expected out in the open world?

Are there any bosses where Shared Tagging will not be used? Nightmare Pilgrim?

pre-expansion, – In some cases it makes more sense to keep tagging rules to the old system where only a group shares credit and looting. Encounters such as Dreadtooth and Ancient Threat will continue to use group tagging rules.

Are the Alliance Crates armors in collections?

Does the new outfit designer work?

Mostly. I had some bugs with un-color-matching my gear. I think those were fixed in 7.0.2

Do weapons work in the outfit designer?

These are the four new Level 80 gearing outfits from #SWTOR's latest expansion.

Is there any new Cartel items?

Arcann's mask is out in #SWTOR it seems pretty nice it color matches it costs 1,000 CC. Heads up there are some color matching bugs in the new outfit designer sad. pic.twitter.com/EB0EvOyNLb

So the game is up, #SWTOR Twitter! But a lot of people are having trouble getting in. If you do get in the "baby yoda" hover pod is available on the cartel market. It is very laggy ingame on the fleet. It seems many PTS bugs were not fixed yet – my keybinds keep resetting. pic.twitter.com/iKYAMUXDoP

The collectors’ edition is now retired.

In my opinion it’s a pretty good deal if you already want the Subscription time and the Cartel Coins, as that means its only $5 more for the other items.