When you subscribe to Star Wars: The Old Republic, you’ll receive the ability to create one free level 70 character for your account. This free token character allow you to create a high-level character and jump directly in to the later expansions, without having to play the original stories that you would experience if you create a character from level 1. The draw-back is that to let you start the expansions right away on these high-level token character, the game will auto-complete the previous major storylines, make your decisions for you for those expansions, and lock you out of playing them on that token character. While the free character token is extremely useful for easily creating a high-level character, its major drawback is that you will miss out on being able to play your class story, and the class stories are often considered some of the best stories available in the entire game. 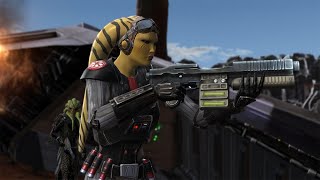 If you’re a new or returning player and you’re wondering if you should create a level 1 character or a level 70 one, most players will highly recommend that you start with a level 1 character. That way, you can learn the game as it’s intended for new players to the game, and won’t get dumped in to the expansion stories partway through, and won’t be overwhelmed with having all your high-level abilities at once. You also then won’t be locked out of playing the storylines yourself and making your own decisions for your character. For example, the game will auto-complete most choices as dark side for the Empire and light side for the Republic, so if you wanted to play a Jedi straying towards the dark you wouldn’t be able to have your Jedi choose that during their main story as the game would instead auto-complete it.

The free token you get added to your account is also considered quite valuable. If you were to go and purchase an additional level 70 token item, called the Commander’s Token, it would cost you about $20 USD in Cartel Coins (2,000 CC) or somewhere in the billions range for credits. Instead of using that token right away, players recommend you save that “free” token you get until you are more familiar with the game and have a better idea of what you’d like to do with it. In general, token characters are great if you want to either jump directly in to the expansions and don’t care about the original stories, or if you want to have a high level character to play on but don’t care about the story at all. A very common way players use these tokens is when they would like a second character of the same class – they’ve maybe already seen the story once and don’t want to play it again, but want to try out the other Advanced Class Option, like creating a Jedi Knight Guardian if they already have a Jedi Knight Sentinel. Another great reason to use your token is to quickly do endgame content with friends on the opposite faction or on a different server, instead of having to level a new character from scratch where they’re playing.

If you really want to get a high-level character WITHOUT auto-completing the story, you can also get a Master’s Datacron item. This expensive Cartel Market item costs 3,200 Cartel Coins or you can buy it on the GTN from other players, and can be used on an existing character to bump them up to level 70 without affecting their story at all. Unlike the Commander’s Token, you don’t get one of these for free.

So in short, when the choice pops up to make a level 1 or high level character at character creation, choose level 1 until you know what you want to make for sure instead of wasting it by accident.