During the Knights of the Fallen Empire expansion, you’ll have the chance to work with potential allies to take down enemy targets across the galaxy. After Zakuuls successful campaign through Republic and Imperial space, massive battle stations called Star Fortresses were deployed over key planets. It’s your job to free these worlds by destroying the battle stations. 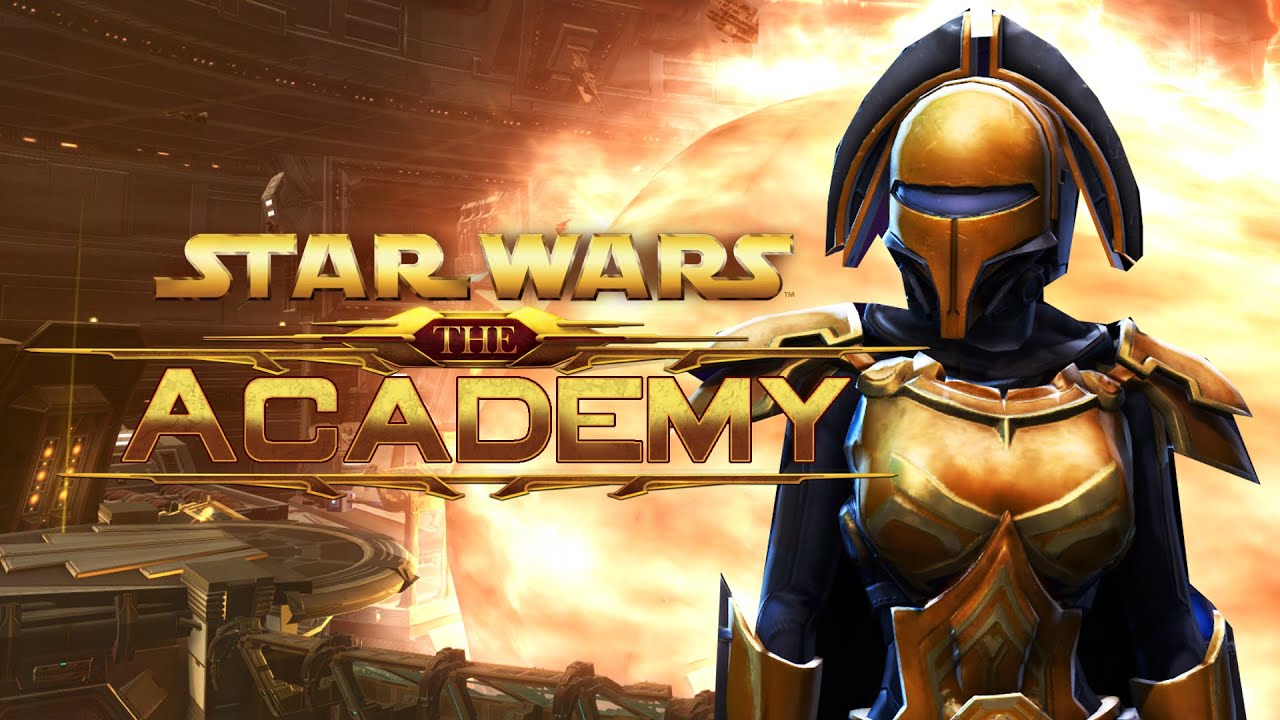 If you haven’t started the Star Fortress questline, you’ll be able to start running Star Fortresses at level 60 or higher once you’ve completed Chapter 9 of Knights of the Fallen Empire, which is Star Wars: The Old Republic’s third expansion. Look for Miot Dengd in the hallways of your alliance base, who has a quest symbol over his head, and enter your first Story-mode Star Fortress.

Let’s start with the achievements you can do in solo mode.

First off, there are six different Star Fortresses. Defeating the Ephemeris droid at the end of all of them will grant you the Physical Backup Unit legacy-wide title.

The first interesting achievement is to find all the hidden datapads for the Zakuulan Devotee Achievement. There’s one hidden in each planet Star Fortress. Scyva’s is on Alderaan, Aivela is on Belsavis, Nahut is on Hoth, Esne’s is on Nar Shaddaa, Tyth’s is on Tatooine and Izax’s is on Voss. You can check your achievements to see which ones you’re missing. Finding all the datapads will grant you the the legacy-wide title Follower of the Old Ways. You can find them in either the story or heroic mode Star Fortresses.

Fallen Knights of the Empire

The next achievement is to find and defeat all 24 paladins in solo or heroic mode. Paladins are a special enemy that have a random chance to show up in your Star Fortress, so to complete this achievements you’ll need to run each Star Fortress multiple times. Completing this achievement will grant you ten copies of the Model Star Fortress decoration and the Fallen Knight legacy-wide title. I’m going to link to a really good guide that has a list of which paladins are where in the description of this video if you want to go hunting.

The third achievement is really neat and is called A Shrouded Vigil. If you’ve earned a pair of Macrobinoculars from the Rise of the Hutt Cartel expansion, you’ll be able to look for hidden droids outside the Star Fortress’s windows and scan them with your Macrobinoculars. As far as I can tell, you can not use the macrobinoculars mission quest item – you can only use the version that you earn as an ability by completing the macrobinoculars quest chain. If you find one, you’ll be granted the The Ever-Watchful legacy-wide title.

If you’re hunting after achievements, make sure to complete bonus objectives while running Star Fortresses in solo or heroic mode. There’s an achievement for completing  25 bonus objectives called Aid from Above, which will grant you 20 cartel coins if you complete it.

Once you destroy all six bunkers, you’ll get the Bunker Buster legacy-wide title. These quests take place outside the Star Fortresses, and are fairly quick and easy to complete.

If you’re working on the Heroic mode, there’s a really cool set of legacy-bound armor that’s only available by running through Heroic Star Fortresses through the alliance alerts. There’s a total of seven pieces per set, and there’s four different sets to collect. You get to choose a piece when you complete the one-time quests attached to each planet’s Heroic mode – so if you want a piece from a different set, you can run Star Fortresses on a second character to earn it and since they’re legacy-bound, you can then send it to whichever character you want.

The headpiece is from Nar Shaddaa, the chest from Alderaan, the hands from Hoth, the belt from Voss, the legs from Tatooine, the boots are from Belsavis and the seventh piece, the bracers, are a random drop from the paladins in Heroic mode, so if you’re looking to try and get a specific piece, just go through that planet’s Star Fortress.

For each Heroic Mode you complete, you’ll also earn the Liberator title for that planet for your character.

If you complete all six Star Fortresses in heroic mode, you’ll get the Galactic Liberator legacy-wide title and the Star Fortress Commander speeder. To get this speeder on your other characters after you’ve earned it, open the achievement up in your Legacy panel and right click on the speeder icon.

An End to the Exarchs

In addition, if you defeat the Exarch at end of each heroic mode Star Fortress, you’ll get ten copies of the Sun Machine Reactor decoration.

Nar Shaddaa Exarch Lesin Tyn – There is one Exarch that’s harder than the others, and that’s Nar Shaddaa’s. This Exarch heals itself with a casted ability called Esne’s Avarice. If your DPS is too low, you’re going to struggle with doing enough DPS to cancel out him healing himself. Interrupting the cast sometimes works, while other times he’ll simply restart it, so you can start by interupting as many as you can. Beyond that, you’ll need to use the same tricks to get better as in any other content – raise your companion’s influence, learn to play your class better and use your abilities more efficiently, use a stim, get better gear, use heroic moment, or bring a friend. 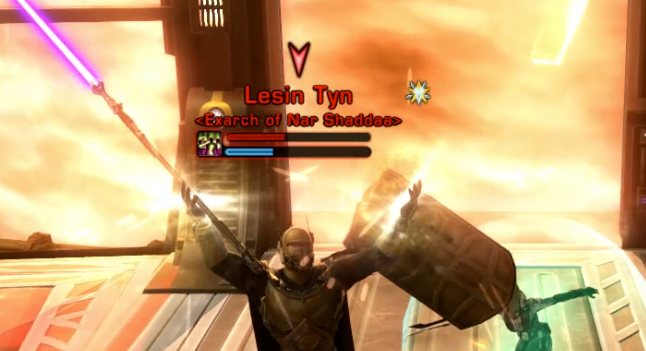 Now here’s where we get into the fun ones. There’s two special achievements, the first is called All for One, and the second is One for All. To get All for One, you’ll need to use all four hidden Alliance Equipment Caches and receive all four buffs at the beginning of your Heroic Star Fortress . When you reach Rank 10 Influence with each of your Alliance Specialists by turning in heroic crates, you’ll be able to find and use the four Alliance Equipment Caches hidden in Heroic Mode Star Fortresses, and access their special buffs that show up at the beginning of the Star fortress as glowing blue machine. Completing a heroic Star Fortress with all four buffs and all four equipment caches will grant you the Fully Armed and Operational legacy-wide title and fifty copies of four unique decorations.

Both Feet on the Ground

Now we’re getting into the true hidden ones. The first is called  Both Feet on the Ground, where you will need to use an impeccably timed stun breaker during the final fight with the Exarch in any Heroic mode. In the final fight, the Exarch has a couple different moves that he repeat, but the one you are looking for is called Impaling Strikes. To recognize this move, look for when the castbar for Impaling Strikes shows up above the Exarch’s head – it’s quite fast, so you need to pay special attention to it. Near the end of the move, the Exarch will stun you and fling you up in to the air. In the very short period between him throwing you into the air and the point where you hit the ground, you’ll need to use your Stun Breaker. All classes get their stun breaker at level 9 or higher, and here’s a list of the stun breaker abilities for each class. To do this achievement, I focused 100% on watching for the Exarch’s castbar, stopped worrying about attacking him, hovered over my stun breaker key, and mashed it as soon as I saw him throw me in the air. Be aware that he has some other casted moves as well as some other knockbacks, so it’s important to watch specifically for Impaling Strikes.

When You Play With Fire….

The second hidden achievement is called When You Play With Fire, and the achievement requires that you defeat an Exarch with their own Star Fortress’s Sun Reactor. This achievement is actually quite difficult as it requires  great timing. You’ll need to take the Exarch down to a very low percentage of health, say 3-5%, then drag him in to the red boxes around the floor of the arena near the edges. The hard part about this is avoiding all the other ways he could die. For example, make sure to stop attacking him yourself when he gets weak, and make sure your companion is set to passive so your companion doesn’t attack him. As a tank, I struggled with this one because even if I stopped attacking the Exarch, and set my companion to passive, some of my chosen utility abilities dished out reflection damage. If you complete this achievement, you’ll earn the Playing with Fire title for your character.

The nice part about the last two achievements, is that if you are working on doing all six star fortresses in heroic mode, if you miss earning Both Feet on the Ground or When You Play With Fire on one Exarch, you can still earn them on the other five Star Fortresses you’ll run next.

Star Fortresses with a Group

Star fortresses can also be done in groups. All the members of your group will need to have access to Chapter 9 of Knights of the Fallen Empire, and will have to go pick up the quest from the questgiver in their Odessan base. Once they’ve got the quest, and talked to the second quest giver outside the Star fortress entrance, you can then team up and run Star Fortresses together – the first player who enters the Star fortress door will pick which Star fortress to run, and the others will walk in to the entrance and join them. The Heroic versions were actually designed to be done with two or more players, but, all players must have completed the introductory Star Fortress quest, and also completed the step where they destroyed a bunker so they can access the Heroic versions with you. Sharing a Heroic quest will not work if they are not eligible to run that Star Fortress normally. 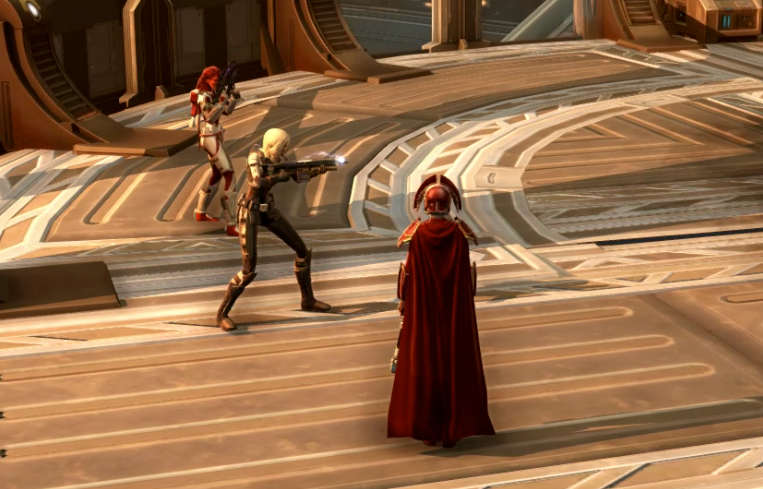