There are hundreds of SWTOR guilds out there to join, but there may come a time when you want to create your own guild in Star Wars: The Old Republic. 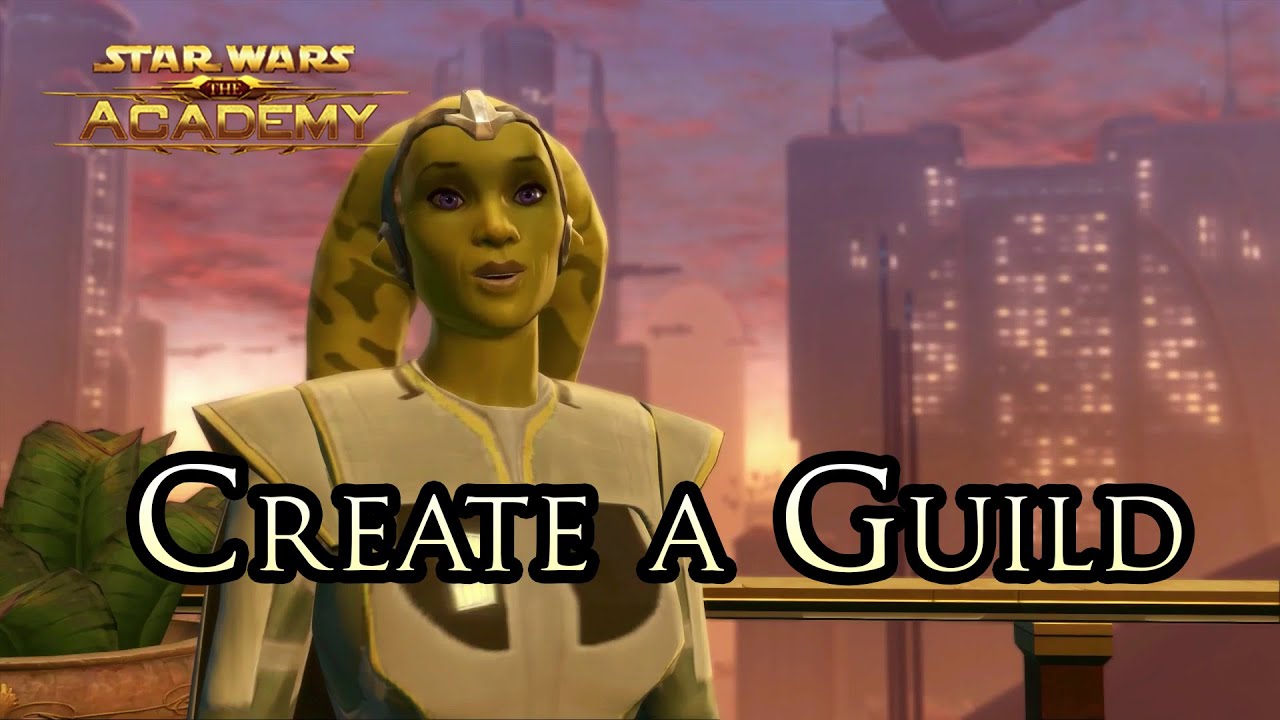 How to Create a SWTOR Guild

If you’re looking to create a guild just for you and your friends, the process is pretty simple.

You need to be subscribed, have four people in a group including yourself, and 5,000 credits on hand. Then you can head to the fleet and talk to a guild registrar npc to create your guild. If you don’t have three of your friends online, you could also ask in general chat for people to temporarily join your guild to help set it up, then kick them out afterwards.

To invite new characters to your guild, you must both be online at the same time. Type “slash G invite”, a space then their character name to invite them to you new guild.

You can also see who is online with the guild window – it’s a flag icon on the menu, or the G key on your keyboard. The guild leader can also edit the guild prefernces, like who can invite new characters, through the guild panel – it’s the “ranks” button on the bottom of the guild panel. To promote or remove a character, right click their name on the main guild window. You can also set notes for a character this way – for example, you could add the nickname of the player who owns that character, what they like to do, or what they can craft. Another feature you can use in the guild pnael is to put a “star” beside a character’ name to set them as the “main” character belonging to a player… it makes it easier to keep track of who is who, and gives a clear indication which character you should send a mail to if you want to contact a player.

Guild Message of the Day

You can also edit the message of the day from the guild panel. This message pops up in the chat window whenever a guild character logs in – it can be a good place to put upcoming events or a nice message to your members. Keep in mind because it is in the chat window, it
often gets overlooked.

Once your guild has grown a bit bigger, you can get a guild bank. Buying a guild bank requires having 12 characters in the guild, and 600,000 credits on hand. To purchase a guild bank, look on the fleet for a purple guild bank. Once you’ve gotten a guild bank, you can store and share items with your guild members. You can set permissions for your guild bank as well – you can decide how many items and credits your different ranks can deposit or withdraw for each of your guild bank tabs. You can buy more tabs with credits – the second tab costs 1 million credits, and they go up from there.

You can also purchase a stronghold or flagship for your guild – a shared space that you and your guild members can decorate. Most guilds also put useful items into their flagship or stronghold like banks, mailboxes, and GTNs that their members can use. You can hand out stronghold keys to your members so they can help decorate your base of operations. Getting a starter guild stronghold only costs 50 thousand credits, but getting a flagship costs 50 million credits.

Flagships are unique because unlike strongholds, you can only get one with a guild. Once you purchase a flagship, you also get access to guild conquests – without a flagship, you can still work on conquests individually, but you won’t be allowed to compete as a guild. If you get on the guild top ten leaderboard for the week, you’ll also get a special reward called encryptions which helps expand your flagship.

If you are just a small guild, getting these things will be the extent of what you need to know about running a guild. But if you want to grow a guild, expand it, and start recruiting members publicly… there’s a lot more you need to know.

Why Make a Guild?

If you are creating a guild with the idea of finding like-minded players, you need to stop, sit down, and decide exactly what your guild will be about. Many guilds are created and simply wither away over time, and creating a new guild is no small feat. I highly recommend that you first look into other guilds, and see if there is any that align with what you want to do. Helping grow an existing guild is often a lot easier than trying to make your own from scratch.

If you’re still interested in making your own after exploring your existing options, here are some of the questions you need to ask yourself about your new guild before you create it.

Why type of guild?

The biggest question is “what type of guild will it be?” Are you looking to make a guild focused on levelling, flashpoints, operations? PvP? Conquests? If you want to make a roleplay-focused guild, what is your guild’s theme? Sith? Jedi? Mandalorians? You’ll want to write down exactly what you want your guild to focus on, and maybe even pick some days and times to hold events for your members based on what you’ve chosen. Don’t be afraid to limit yourself in the beginning – it’s better to do one thing well than ten badly when it comes to making a new guild.

What type of guild members?

You also want to answer the big question of what type of people you want to join your guild. Are you looking to allow who’s interested to join, or only those that meet some type of criteria? Are you trying to make a very large, active guild? Or a small, tight-knit one?

You might also want to think about how you want people to behave while they are in your guild. Will it be a free for all, where everyone can do or say what they want, or is there a code of conduct, like no swearing or no racism? Do members have to show up for certain events, or can they come and go as they please?

Once you have a charter down of what your guild is all about, you’ll need to start looking into the technical side of running a guild. Many guilds also have ways outside of the game to communicate – some guilds use facebook, forums or a website called enjinn to help share information about the guild and to send potential members to so they can get more information about why they should join. Guild websites like these can be a lot of work to maintain, but they help create a sense of community even outside of when people are online ingame. It’s also one of the best ways to share upcoming events with your guildmates – you can use them to alert people about upcoming operations or let them sign up for operations spots, tell them what conquests are coming up, list who can craft what, and share news and screenshots. Roleplaying guilds especially will want to have a place online where their members can post biographies and you can post summaries of past roleplay events so those who couldn’t attend can catch up.

Once you’ve gotten both the idea of your guild hammered down, and how you’ll share it outside the game, you’ll also want to think about leadership and responsibilities of the people in your guild. As a guild leader, what will your role be? If you add more leadership roles to your guild, like officers, what will their responsibilities be? Don’t just hand out officership ranks to your friends or early members, make sure they (and you!) are first up to the challenge and know what they’re getting in to.

The biggest thing that kills a new guild is losing members over time – most SWTOR players have a story about being a part of a guild, leaving for a time then coming back and finding the guild dead. The only way to combat this is to constantly be recruiting and growing your guild, and of course offering events and fun that current members keep coming back for. Make sure to have a strategy in place to get new members – will you post in general chat that you are recruiting every time you hit a new planet? Will you run flashpoints and operations to meet new people, and personally invite the ones you like? There’s tons of ways to let people know about your guild, but if you don’t actively recruit, your guild will empty out over time.

How to Grow a Guild: PvE, PvP, RP Events 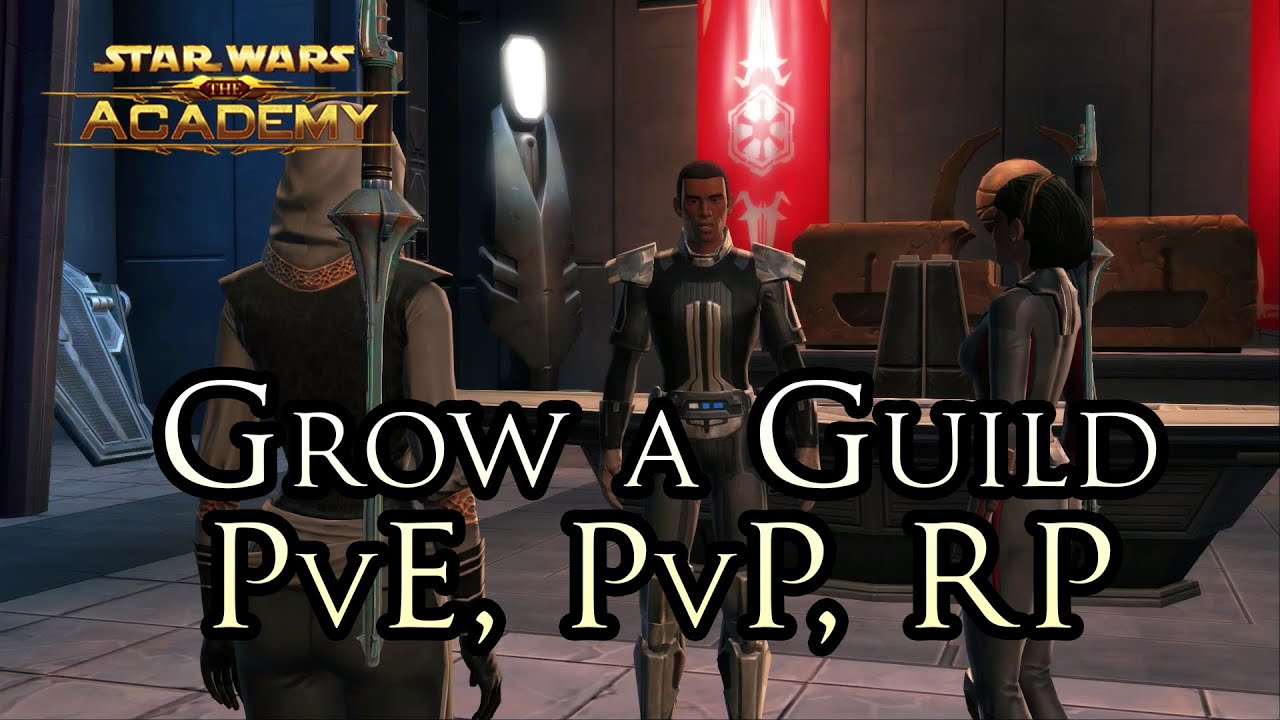 How to Grow a Guild: Crafting, Conquest, Flagship 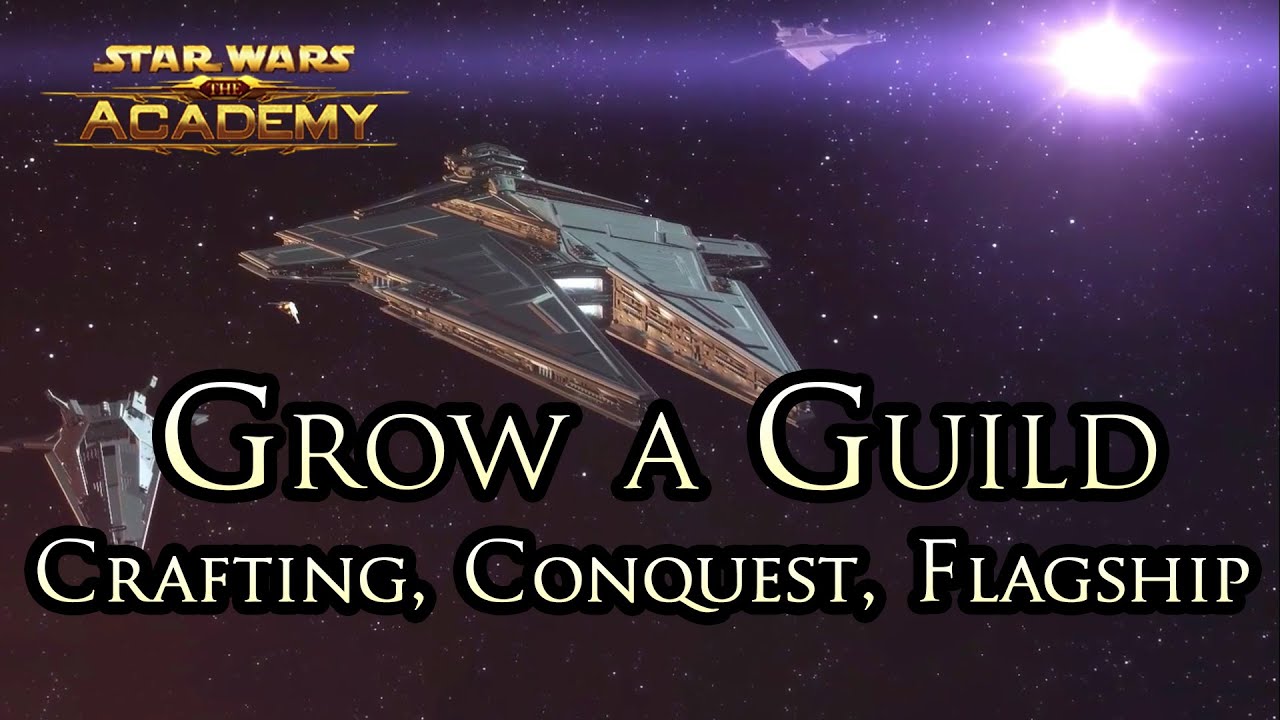