UPDATE June 2022: Character names have been increased to 21 letters/symbols. Naming was broken for a short time but seems to be fixed now. 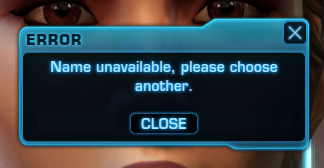 The most common error is “Name unavailable, please choose another.” This means someone else on your server has already chosen this name and you will have to be more creative.

To help you find an unchosen name, I’ve created an Alternate Name Generator you can try!

I also have a ton of tips available in my unavailable names guide!

The “Invalid name.” error with no other information means you are simply not allowed to choose this name, and it is on a list of “banned” names. Many official Star Wars names, religious names, political names, offensive names and name with swear words are on the banned list. For example, you can not name your character Revan or Yoda, as those are official Star Wars names already. The word “Han” by itself is also banned and so are things like “Han’Solo”.

You also can’t use titles in your character name, as titles are something you earn in-game. Using the word Darth, Jedi, Knight or General anywhere in the name will also make it invalid. 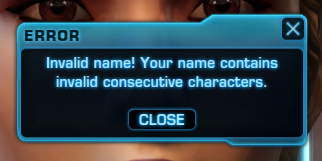 If you are trying to get creative with your names, you might get the “Invalid name! Your name contain invalid consecutive characters.” error. This happens when you try and use three of the same letter in a row. For example Chhhristopher with  h’s is not allowed, but Chhristopher with 2 h’s is just fine. This is to prevent players make names that look like spam, like the otherwise-valid name Brrrrrrrrrrrrrrrrrrr.

You also can not put two apostrophes together.

You can not put your apostrophes and dash beside each other, they need a letter in-between.

Invalid name! Your name must have 3 character before and after a space. 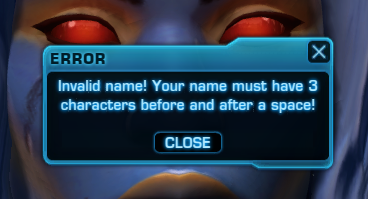 If you’re trying to make a short name, you might get this error: “Your name must be at least three letters long. Heads up, most 3 letter and 4 letter names are already taken.”

Your name must have at least three letters. One letter and two letter names automatically fail. Three letter names are very unlikely to be available but will pass the test if you can find one.

Invalid name! Names may not start or end with a dash or an apostrophe.

To prevent errors in-game when typing commands in the chat, “names may not start or end with a dash or an apostrophe.”

If you decide you don’t like your character name, you can change it.

If you’ve just created your character recently, most players suggest to just delete that character and recreate it, as that doesn’t cost anything and it’s fairly quick to catch up if you’ve only played a few hours so far, especially since you’ll know where to go for each of your quests.

Rename: Character Name: If you don’t want to delete your character, you can purchase an item called Rename: Character Name, either from the Cartel Market or from the GTN with credits. On the Cartel Market, it will cost 1,000 Cartel Coins, which is either 2 months worth of  the coins you get free with your subscription, or about $10 USD worth of Cartel Coins if you buy them. On the GTN, the price and availability will change a lot based on what players are selling, but it’s likely very expensive. Make sure to use the item from your inventory on the character you want to rename. The rename button will appear on your character sheet after you’ve used the item.

Rename: Legacy Name: If you don’t like your legacy name, you can change it for your entire server for the same cost, but the item is called Rename: Legacy Name. Most players simply hide their Legacy name on their characters if they don’t want it showing, though it does show publicly in a few places like on the guild membership list.

Character names with alt codes can often be difficult to invite to a group or difficult to message in-game, so I usually do not recommend players use alt codes in their names if they want to do any type of group content – but if you really want to name your character Rávæñ, here’s how to use alt codes and which alt codes are valid!

Titles add an additional bit of text to your character nameplate. They do not change the actual name of your character – for example, if your title and name are Darth Solence, your character name would still just be Solence, and that’s the name players would type in to message you in-game. The Darth part, the title, will only show up on your nameplate if players have nameplates turned on.