Alt Codes are letters that have accents over them, and are usually used for non-English languages. For example, the name Sofía in Spanish has an accent over the i. Players of Star Wars: The Old Republic sometimes use Alt Codes in their character names when they can not get their desired character name as it has already been taken or is not allowed. So while plain old Nicholas might be taken, Nichölas might not be, and the name “Revan” might not be allowed, but Rávæñ might pass the test. Technically these alt code characters would change the pronunciation of the name – but most players ignore the accents in character names, knowing that the player chose them just because they couldn’t get their desired name.

Character names with alt codes can often be difficult to invite to a group, add to a friends list, or message in-game, so I usually do not recommend players use alt codes in their names if they want to do any type of group content.

Most players use an English keyboard which does not have accent codes easily visible to type, and even if they do, it can often be hard to spot the accent marks especially over letters like lowercase i. 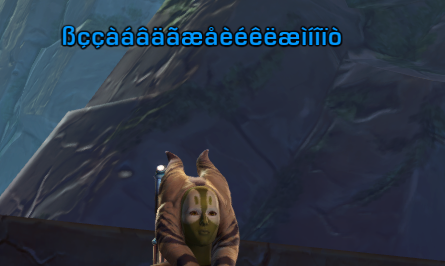 If you do decide to play a character with alt codes in your name, make sure to write it down somewhere online where you can copy it easily from later – for example, send yourself an email with your character name with all the special symbols in it. That way if you are playing with a friend, you can copy that name and send it to them through discord, so they can easily invite you to their group by copying it and then pasting it in-game be press CTRL+V while they are in the chat typing box, or in the add friend typing box.

If you don’t have that option available, for example you are just trying to join a random group in-game, you can whisper the person who is trying to invite you, and they can click your name in the whisper, which will allow them to highlight your accented name, and pres CTRL+C to copy it and then CTRL+V to paste it after typing /invite to invite you. Other players may not know how to do this, so if they say they can’t invite you, you may need to teach them how to copy your name first.

These are the alt codes that will work in the character creator in Star Wars: The Old Republic.

When choosing an alt code name, a lower case and upper case letter are considered the same. The game will automatically capitalize the first letter of your name and lowercase the rest whether you want it to or not. 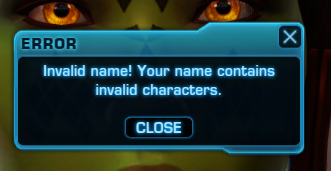 If you try and use more obscure alt codes or number in your Star Wars: The Old Republic character name, you will get the message: Invalid name! Your name contains invalid characters.

Making things easier: If you do decide to create a character with accent marks in their name, make sure to write down their full correct name somewhere outside of the game and save it – for example, send an email to yourself that you can find easily. That way, if you are trying to play with a friend, and you need to tell them your character name, you can copy and paste it to them so they can paste it ingame with CTRL+C and CTRL+V, or whisper them in-game and then they can click your name in the whisper and copy it from there with their mouse and CTRL+C. I tend not to choose characters with alt codes due to this hassle, but accent codes are a popular choice for many players.

But how did they get that name…? 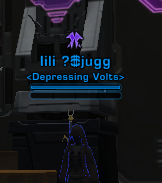 Screenshot by another player on this thread.

So why can you sometimes see players with all kinds of strange symbols in their name? Question marks? Credit symbols? ▓█¤¿¿

For a short time the character creator was broken and allowed certain symbols to go through when it shouldn’t have. Players who were able to create characters during that time may still have those characters.

It is unclear if they will ever be forced to change their names. If a player is abusing the naming rules, for example sending inappropriate messages in chat, or cheating in Players vs Player content, their “illegal” name makes them harder to report and they may face harsher penalties once reported as its clear they chose the name to try and circumvent being reported. However, if they are just enjoying their life and not causing trouble, there is a good chance they may be able to keep their temporarily-accidentally-legal name as there’s no major reason for Bioware to cause them to change it. This is why you may see characters with names like this on the Republic or Imperial Fleet.