Ossus – A Stronghold, A Battlefield, A Wasteland, A Hope…

Greetings, I am pleased to inform that our missing Keeper of the Jedi Archives, Jedi Master Gnost-Dural, is alive and well on the planet of Ossus. I may now gratefully relinquish my post, taken in his absence, though I must admit my interest in the knowledge of our ancient past, and the history of the Jedi Order, remains. 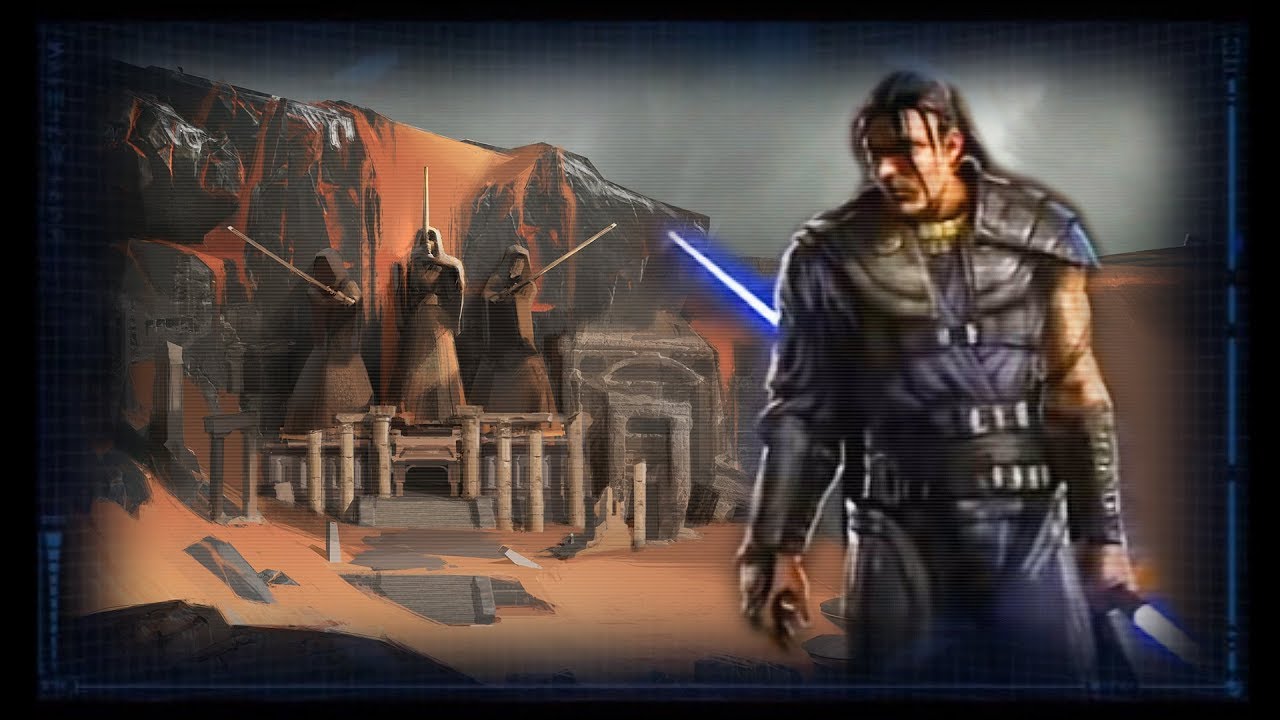 With the rediscovery of the Jedi colony on Ossus, I have taken up a daunting task – to gather the knowledge of the planet of Ossus, in light of the discoveries made there. Specifically, I have chosen to relate the tale of Ossus’s destruction, in hopes that Ossus will not suffer a second cataclysm at the hands of the Sith. To relate this tale, I have recruited historian Azilori to share their knowledge of this secretive planet.

Before the Xim’s empire was overrun by Hutt invasion, the planet of Ossus was under the control of Xim the Despot and his mighty military forces – then known as ‘Idux’. It sits in the Adega System (a speculated ‘artificially made’ system due to its unusual orbit) and in later years came to be an extremely important planet to both the Republic and the Empire. About 25,000 years before the Battle of Yavin, a small group of Jedi ventured away from their home world on Tython and found Ossus – where they established a school of philosophy to explore all areas of the force, both light and dark. Here, too, the philosophies of the Living and Unifying Force were established.

It wasn’t until decades later, when scouts of the Republic were investigating what then was still thought of as uncharted territories, however were surprised to encounter the inhabited planet of Ossus, and even more so that this planet was occupied by fellow republicans. After much debate in the senate, Ossus was used as a tool for the Republic military to defend the core worlds and watch over the Perlemian Trade Route from the growing threats originating from the Tion Cluster and Hutt Space. Thanks to the optimal positioning of Ossus, the core worlds remained much better protected and this allowed for great technological and structural development in this time, safeguarded from mass scale Hutt, Xim and Rakata attacks for over 7,000 years.

Ossus continued to show much importance to the republic and in particular the Jedi, during the Pius Dea Crusades, in which the supreme chancellor, Contispex the first, (a believer of the Pius Dea religion, where there was a strong humanocentrism and zero tolerance for alien species and sympathizers) started a series of thirty wars that raged throughout the Republic, in an attempt to end all alien life.The Jedi could not contain this rampage and therefore withdrew completely from the Republic and settled on Ossus, where they remained for over 800 years until the peace loving Caamasi species persuaded them to stand up for the republic that they were once a part of, and defeat the Pius Dea movement altogether (fittingly, Caasami is translated into “friend from afar” and “stranger to be trusted” in several languages).

In the years around 5000 BBY, before the battle of Yavin, a Draethos Jedi master by the name of Odan-Urr founded the Jedi Library on Ossus, which housed many valuable texts, filled with Jedi knowledge and teachings that could be extremely dangerous if placed into the wrong hands. This rich culture and masses of resources on Ossus attracted many non-Jedi individuals from off-world, including refugees seeking a home, and academics that wanted to learn material that couldn’t be found elsewhere in the galaxy. Many Jedi that were trained on the historic planet, went on to do great and terrible things, such as Freedon Nadd, Nomi Sunrider and Shoaneb Culu. Despite this utopia created by countless generations of Jedi settlers and academics, the peace that was evident on Ossus was not always to be.

Four thousand years before the Battle of Yavin, the galaxy was once again plunged into mass scale war, this time going by the name of the “Great Sith War”. During this dark time, the galaxy saw the return of the Sith, through a series of attacks that started on the planet of Onderon and continued until the great Sith commanders reached the heart of the republic. Ossus was attacked by two of these warriors of the Sith. Ulic Qel-Droma, an Alderaanian Jedi knight, turned dark lord of the Sith, was accompanied by Exar Kun, in the turning of many Jedi on the peaceful planet to the dark side as well as stealing priceless holocrons and murdering Odan-Urr, the founder of the Jedi Archives. They later used weapons salvaged from Naga Sadow’s battleship to destroy the Cron Cluster nearby Ossus and create an energy surge that spanned many parsecs, causing Jedi and other academics to flee the planet of Ossus. The Sith used this chaotic time to their advantage, and the two dark lords returned to the planet to steal the remainder of the priceless information and artifacts housed there. Their trip, however, was not as simple as they had first planned, as a shape-shifting Jedi master by the name of Ood Bnar blocked their path as they were trying to steal lightsabers, by transforming into a tree and concealing the sabers within its structure.

As the chaos continued on the planet of Ossus, Ulic Qel-Droma had a confrontation with his Jedi brother Cay Qel-Droma and Ulic killed him – filled with rage of the dark side. However fellow Jedi Nomi Sunrider witnessed these events and completely removed Ulic’s ablility to use the force and went on to save him from the unstable planet – taking him back to the core worlds as a prisoner. The full force of the shock wave hit the planet shortly afterwards – destroying all of the surface, and killing the vast majority of all lifeforms that hadn’t fled. Due to the destruction of the Cron Cluster star system, hyperspace travel to the planet of Ossus was near impossible, so the planet lay in its untouched, devastated state for many, many centuries. Enshrouded by the Cron Drift, a nebula of detritus and barren rock left over from the explosion of the Cron supernova, Ossus had become an inhospitable, radioactive wasteland.

After the assault on the galaxy by the great power of the Eternal Empire, a small group of Jedi decided to rebuild their order, piece by piece, creating a small colony, dedicated to rediscovering their meaning – as was done over 20,000 years before by the Jedi that left Tython. These Jedi spent several years developing their community, until the Sith order – also healing their scars from the war with Zakuul – caught wind of their operation and decided to put an end to it. Will this mean another mass scale war between the Jedi and the Sith? Will Ossus be plunged into yet another time of great darkness and destruction?

We can only hope, that under the careful eye of Jedi Master Gnost Dural, and of Tau Idair, the head of security for the colony on Ossus, our new colony will remain a sanctuary for both the Jedi and for those seeking a planet of peace after the war with the Eternal Empire.