Junior Research Project is an obscure achievement related to the Relics of the Gree Event. 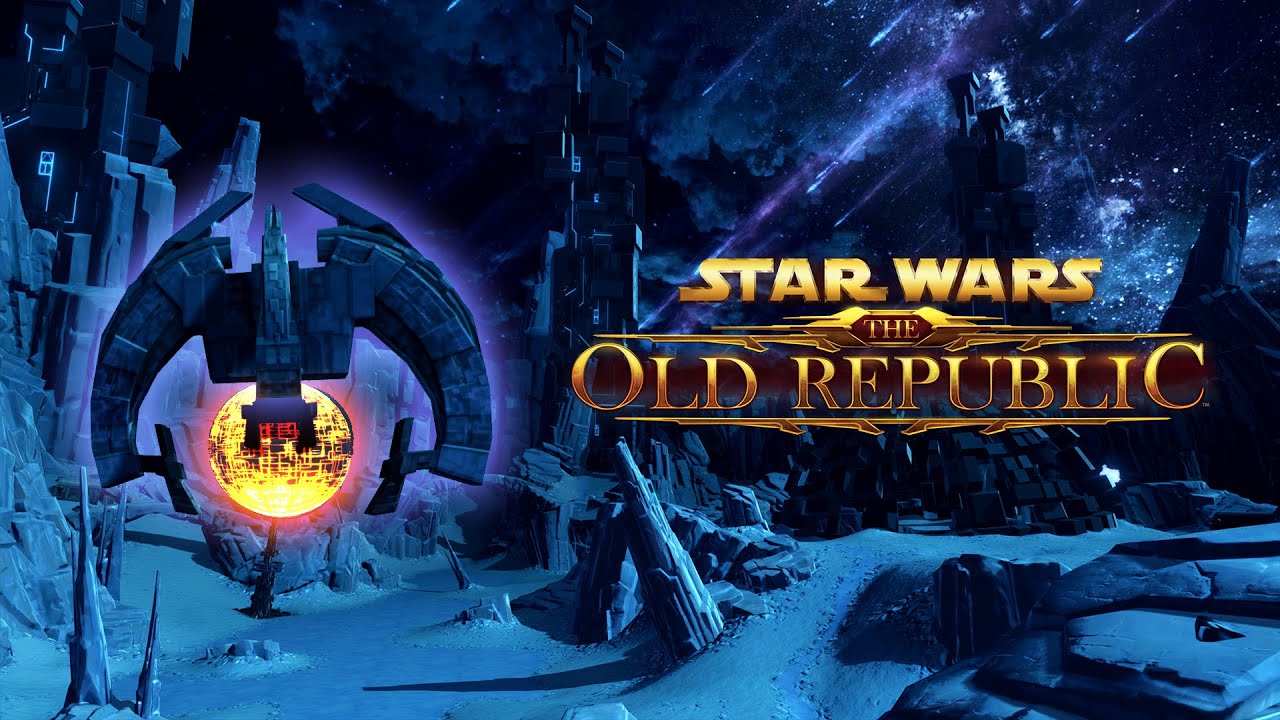 This achievement will send you across the galaxy to collect data while you have the Miniature Gray Secant pet out, which you can only get once you are Legend rank with the Gree. It costs 50,000 credits, and can be purchased from the Gree vendors either on Ilum during the event or in the Cartel Bazaar section of the Fleet any time of the year.

This achievement is time-consuming, but the actual hunt does not need to be completed during the Gree event. This achievement and mini-quest can be done by all players who have reached Legend rank with the Gree, including free-to-play and preferred players.

I like this achievement because it encourages you to go exploring in the open world, and is a great break from the high-intensity Gree activities like open-world PvP and the Xenoanalyst boss fight.

TIP: Your Miniature Gray Secant pet often gets “put away” when you travel, especially between planets, so make sure to re-summon it before killing creatures. To summon your pet, press “P” on your keyboard to open your Abilities panel, then go to the pets section and click the pet. You can also drag the pet ability on to your quickbars. If the little light under your pet icon on your quickbars is lit up, it means your pet is successfully out and with you!

Tip 2: You can do this achievement with a group of up to 4 (it probably doesn’t work in a large operation group). Make sure to stay near each other and that everyone who wants the achievement has their pet out.

Tip 3: Use the Heroic Quick Travel from your solo activities tab (“3 little people near your minimap”) to quickly get to Alderaan, Belsavis, Tatooine and Balmorra! You only have to go to the spaceport of Quesh.

The Junior Research Project achievement is also required for the Gray Perpendicular legacy title, which is awarded from another achievement which includes these requirements:

After completing the Junior Research project, I had fun putting together world boss group to fight the Wampa and the Worm multiple times. Don’t forget you can check multiple instances including the PvP one. After running the event to Legend rank I was naturally at 563 droids – it took only about half an hour with a group of four to go around and kill the missing droids for the achievement and get the Gray Perpendicular title!

Republic: Start with the ones on the map where you load in near the spaceport (Map 1/5 below) and make your way east.

Imperial: There’s a huge batch of Bolraida to the east of where you start, near the dam (Map 5/5 below). 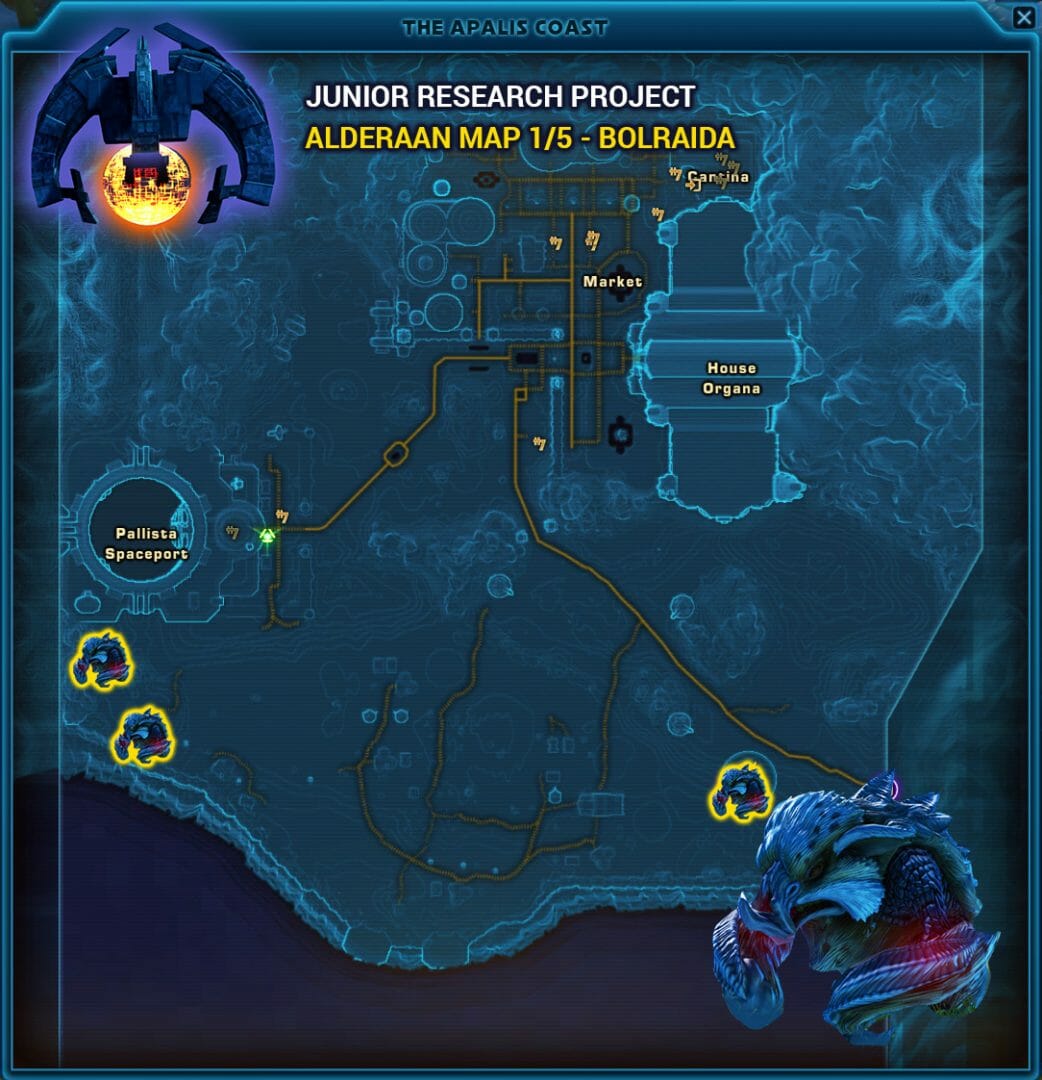 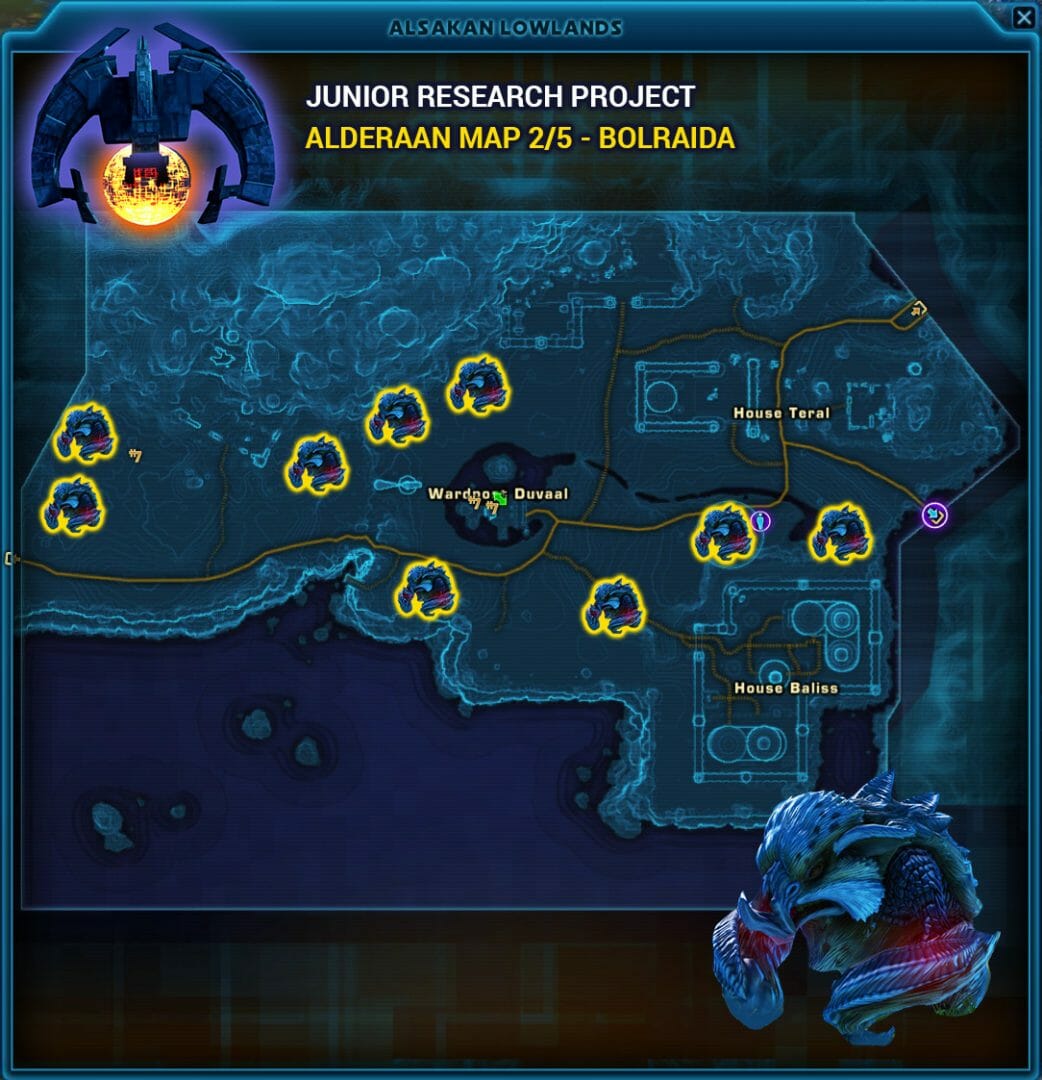 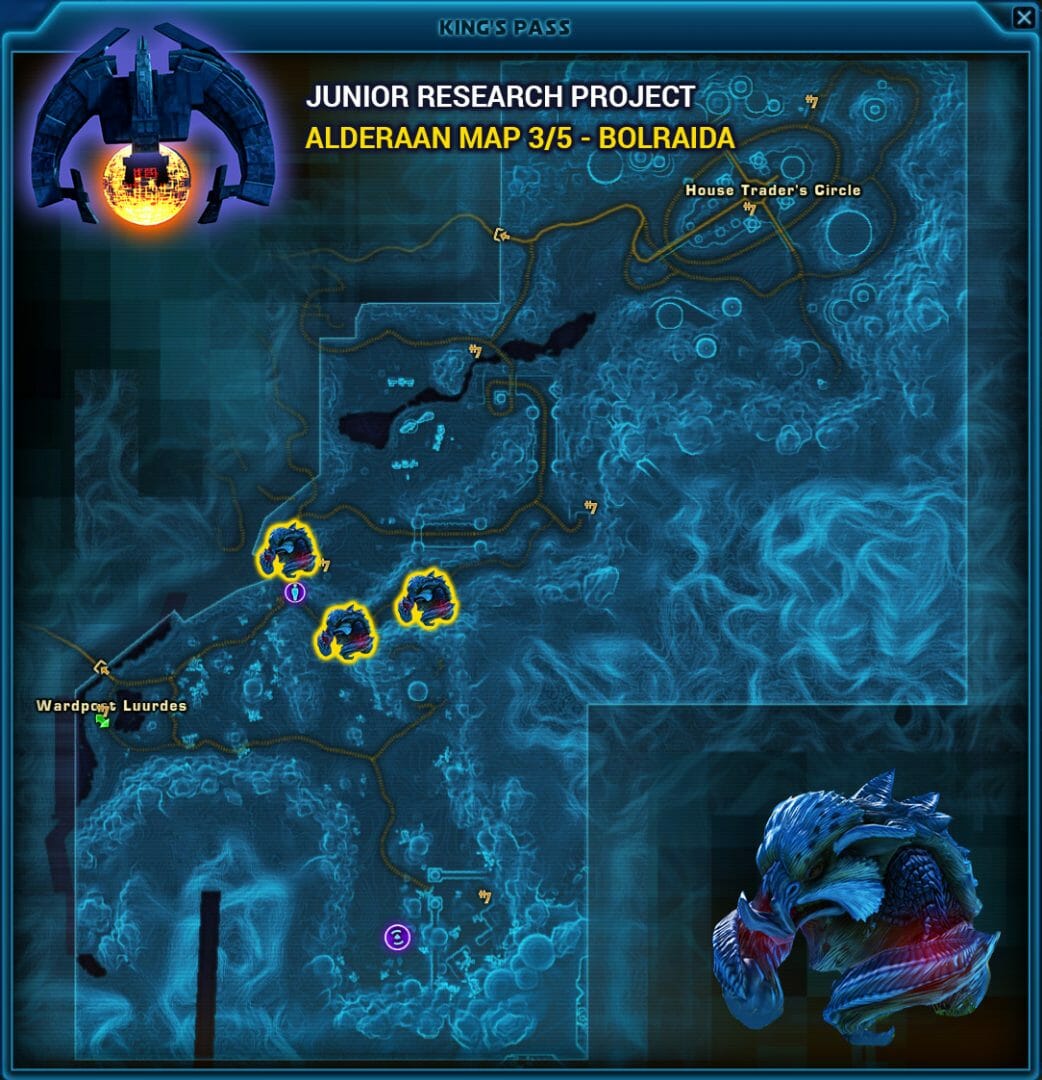 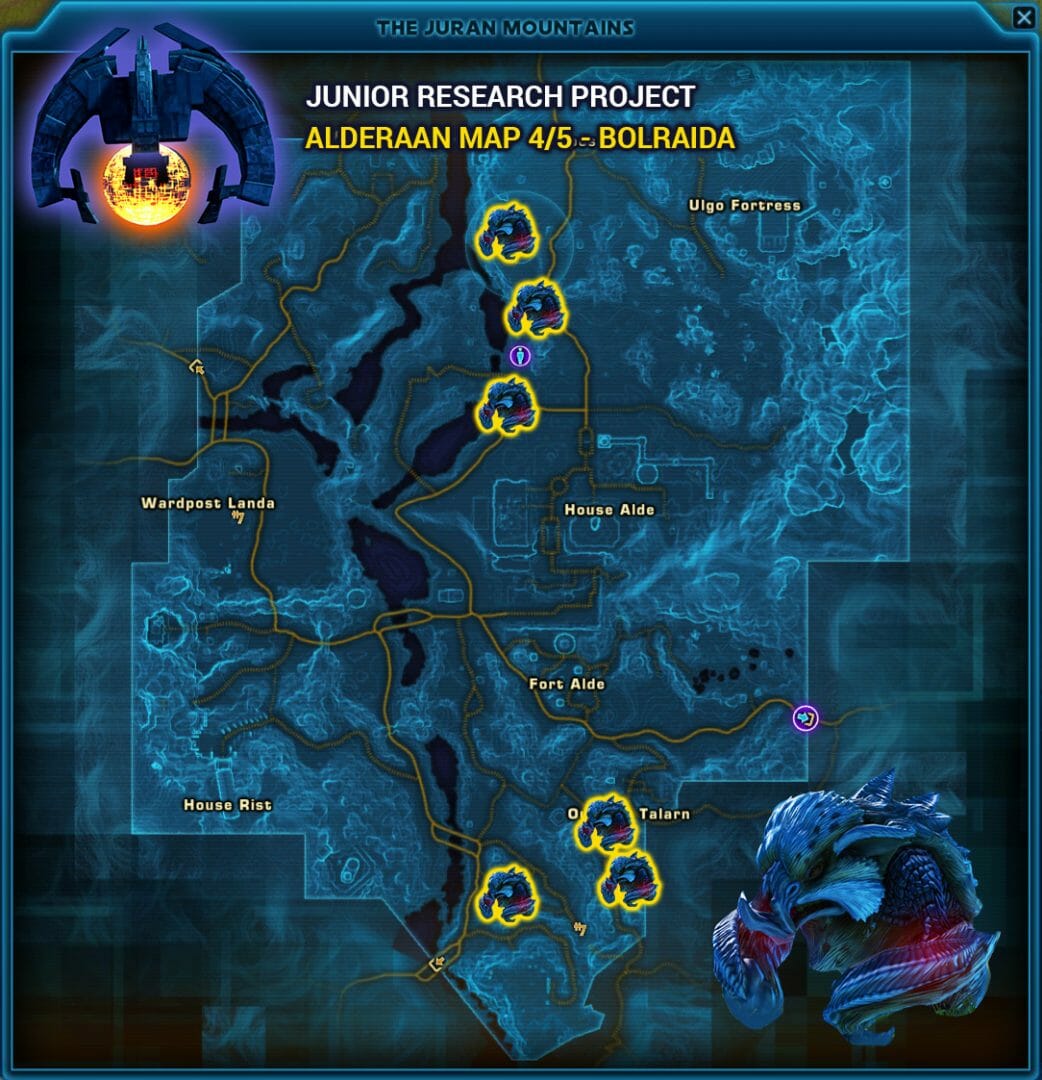 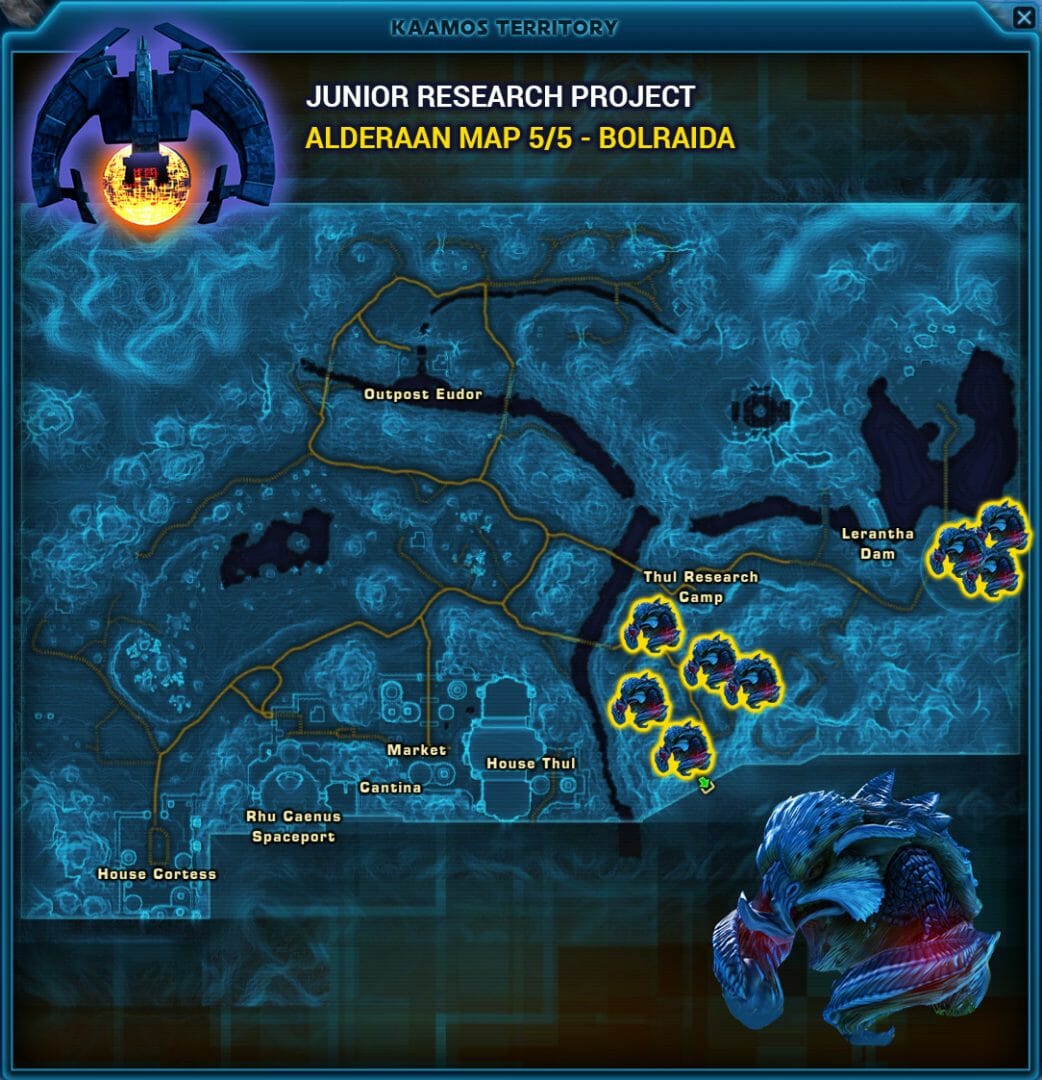 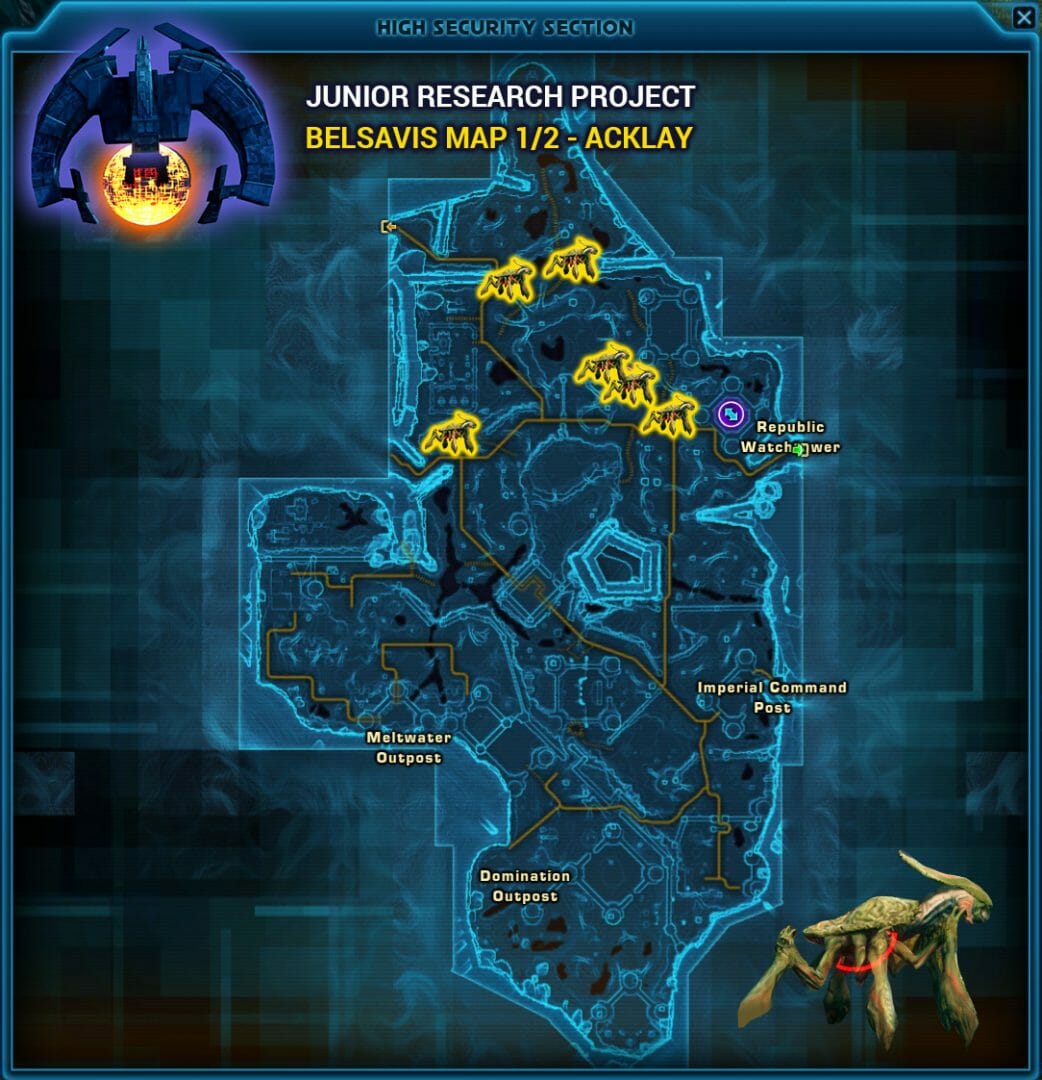 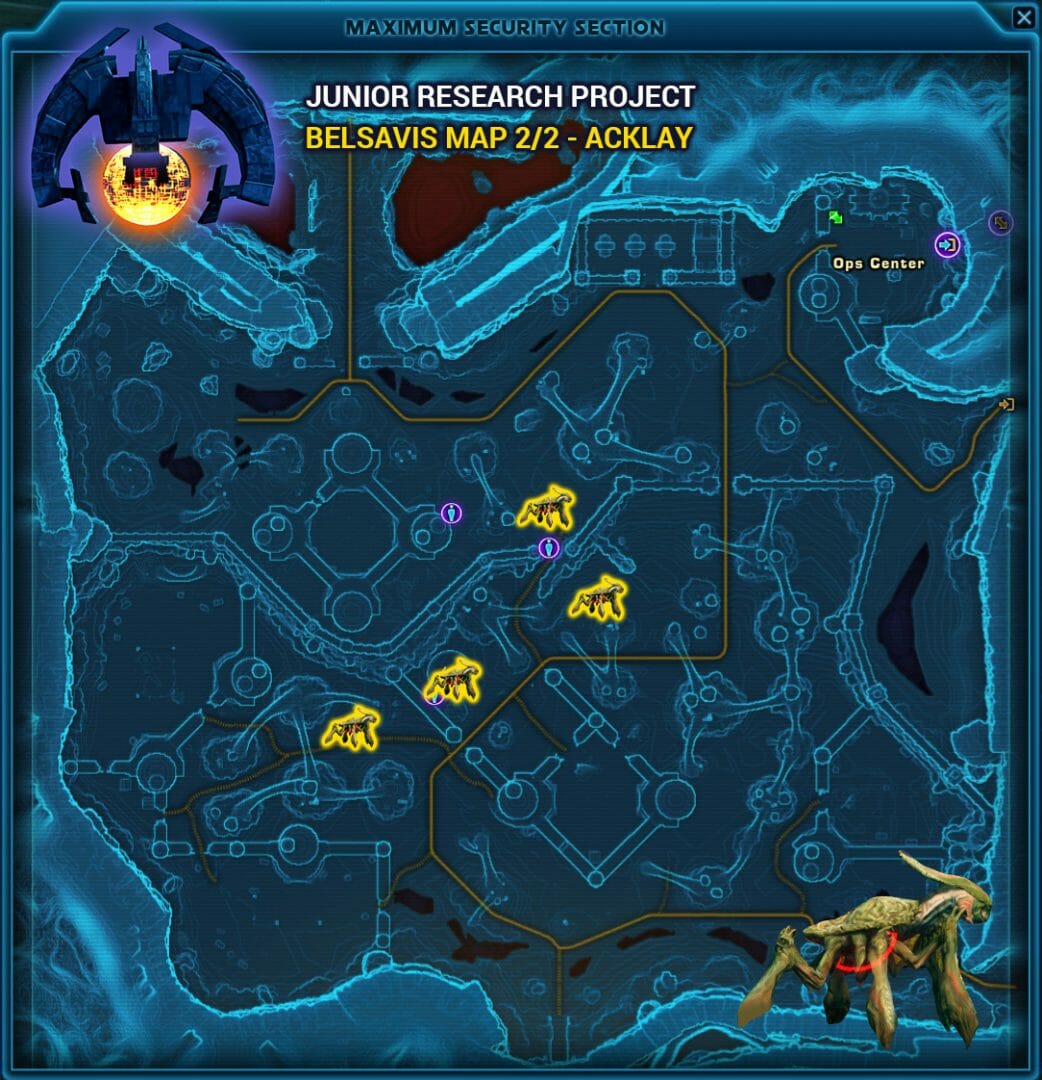 There’s just a million lobels on Quesh, this one’s easy. 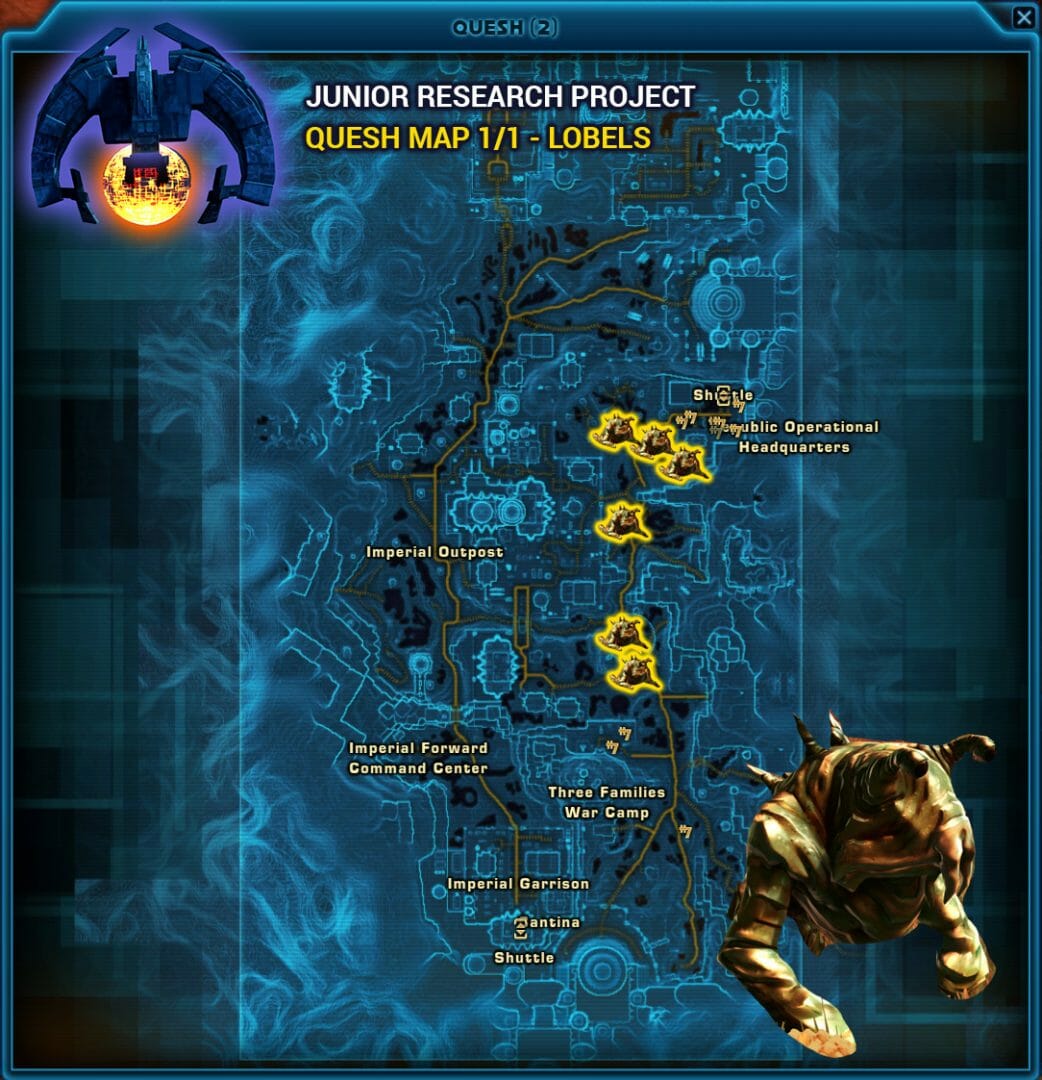 Republic: There’s a ton of womp rats near the spaceport on the outer edges of the city.

Imperial: There’s many womp rats outside Mos Ila in the desert. 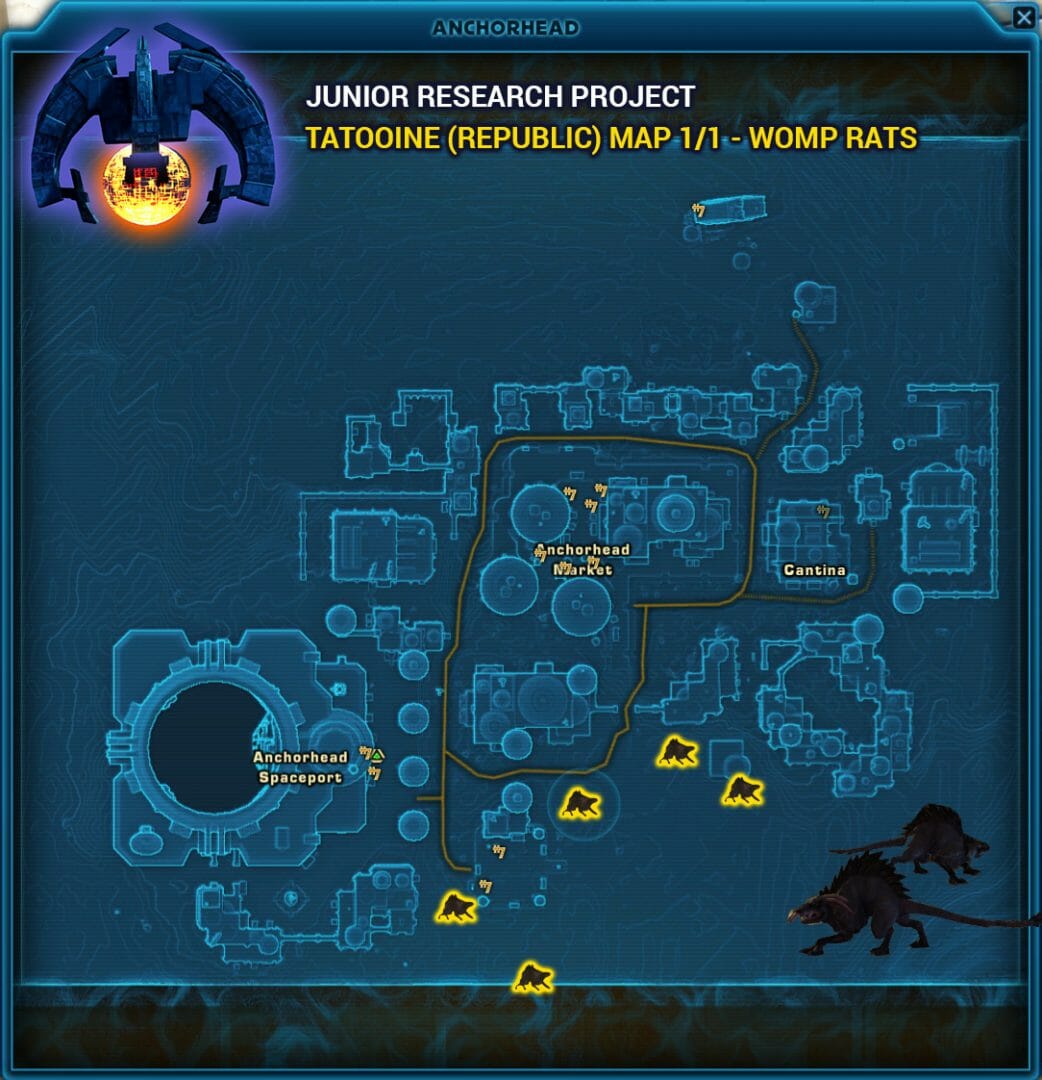 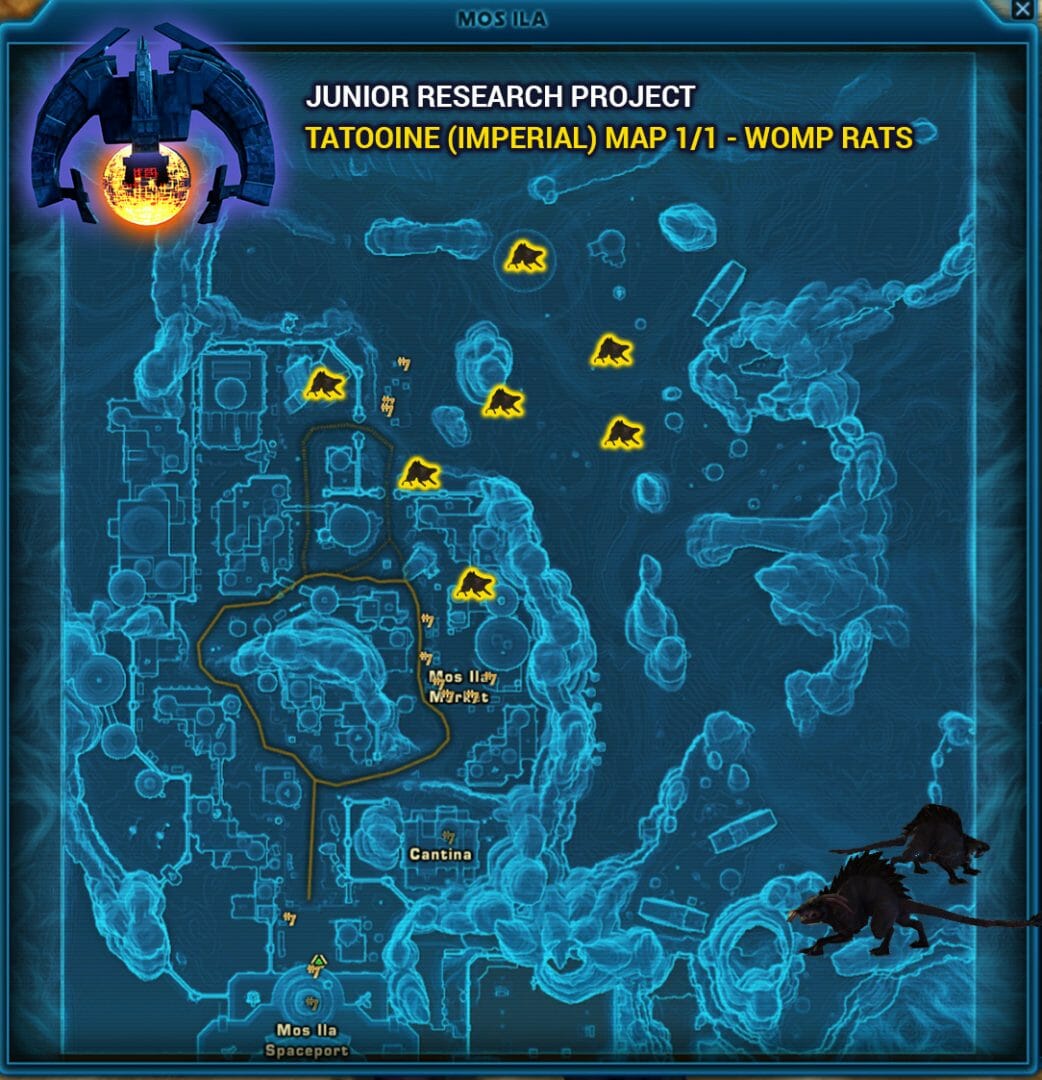 Republic: I could only find a total of nine Bormu on Republic Balmorra… so if you only have a Republic character to do this on (it’s legacy-wide) you’ll need to travel between the three locations and wait for them to respawn or try different instances.

Imperial: There’s a huge batch of Bormu Imperial side on the Markaran Plains map near the Okara Droid factory. I don’t know if Grandfather the giant Bormu counts, I don’t suggest attacking him if you find him!! 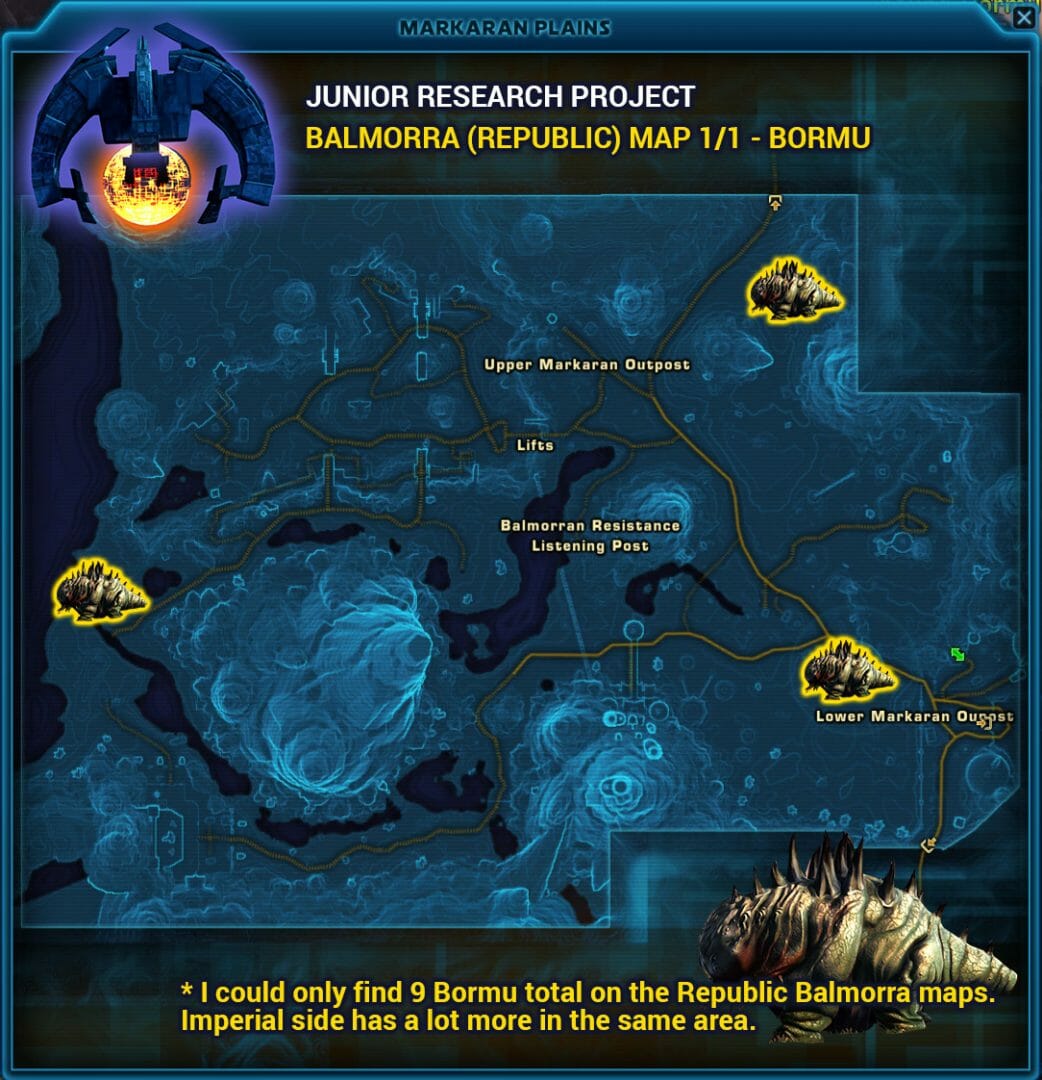 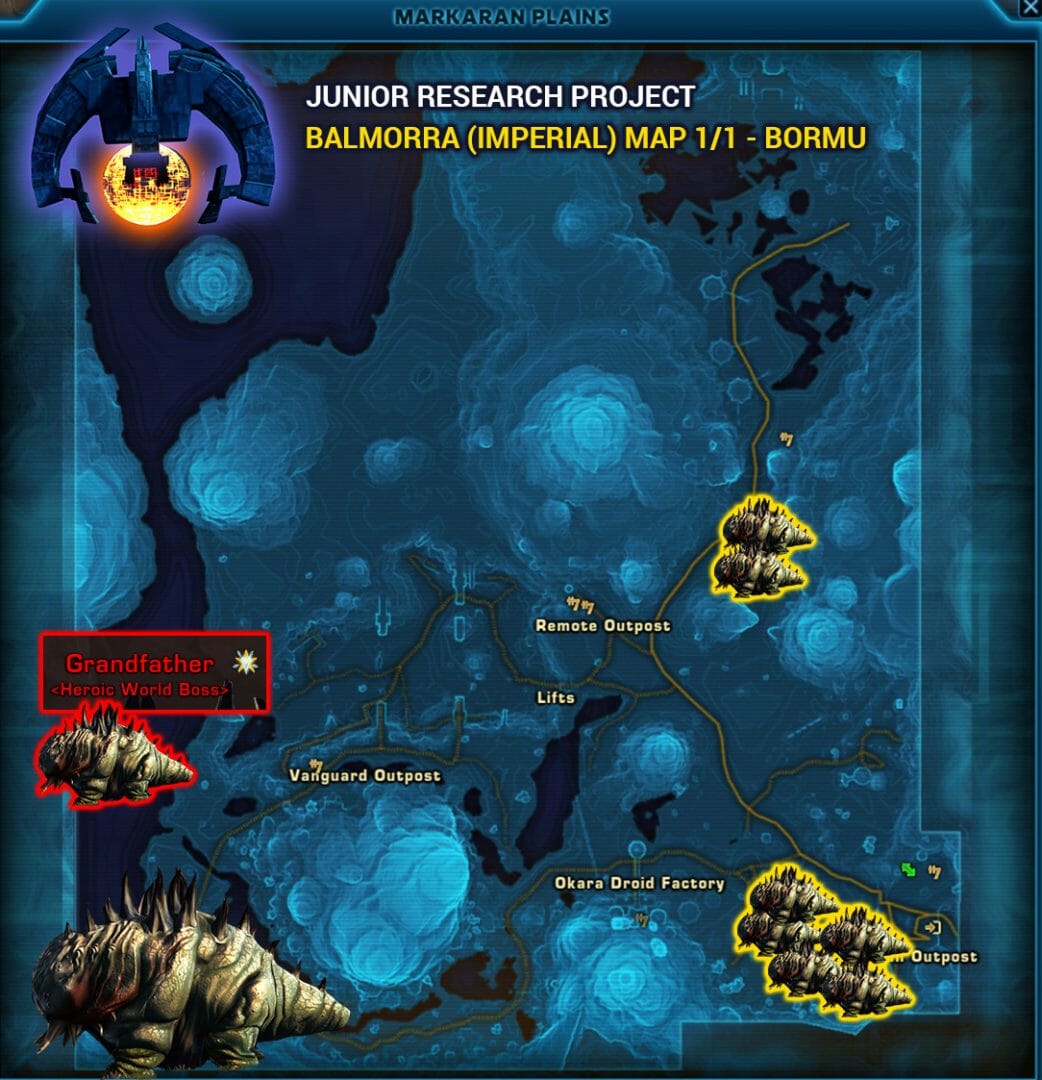