Greetings. Now that our keeper of the Jedi Archives, Jedi Master Gnost-dural, has returned to the known galaxy he has asked me to gather knowledge of potential planets for the next homeworld for the colony as he leads the remnants of the Jedi order to safety.

After hearing the tales of valiant and fallen Jedi on Ossus, my mind strays to Dantooine, which much like Ossus, has gone through its own cycles of light and darkness. To relate this tale, I have recruited historian Azilori to share their knowledge of our former homeworld. 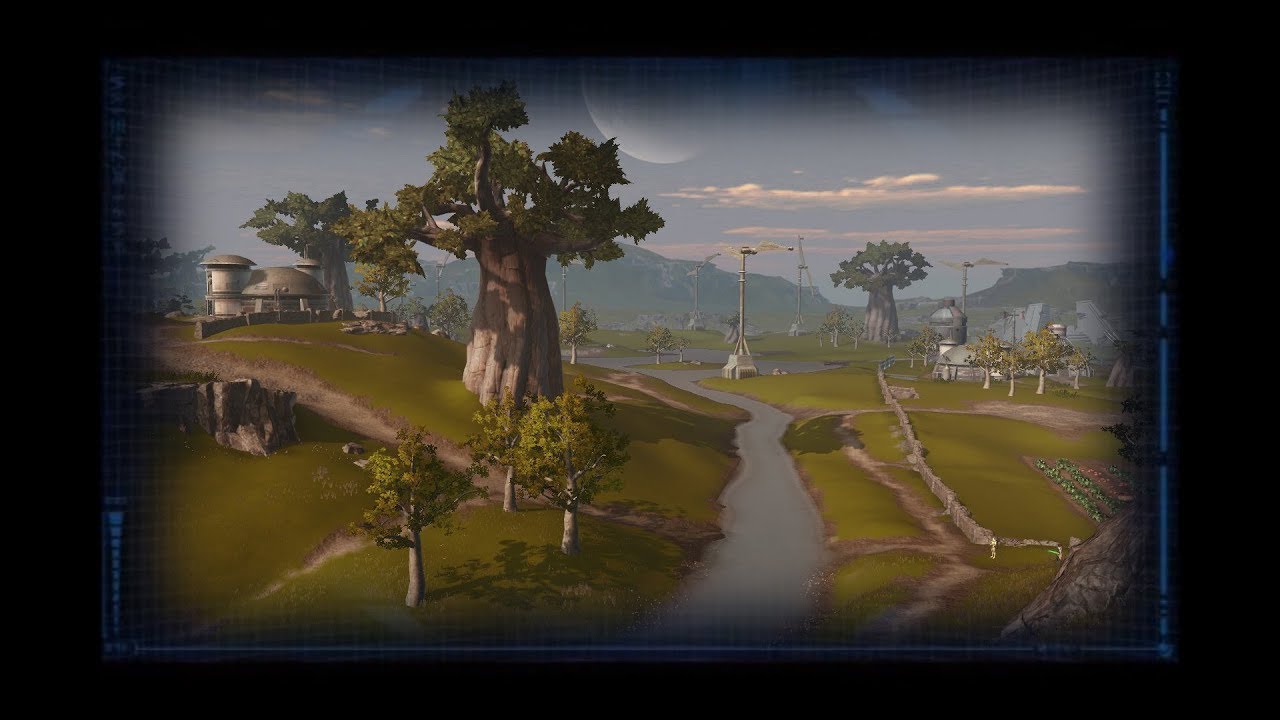 Two moons shine down on the savannahs and open plains of this remote, outer-rim planet, but even with the remains of the abandoned Jedi Temple there, the planet may no longer be a home for the Jedi, or for those now in our care.

Due to its isolated location and relative distance from the bustle of the core world trade routes – the planet has attracted settlers from all over the galaxy… those that are looking to hide from authority and those whom simply seek a simple life away from the war and chaos of the republic or imperial worlds. 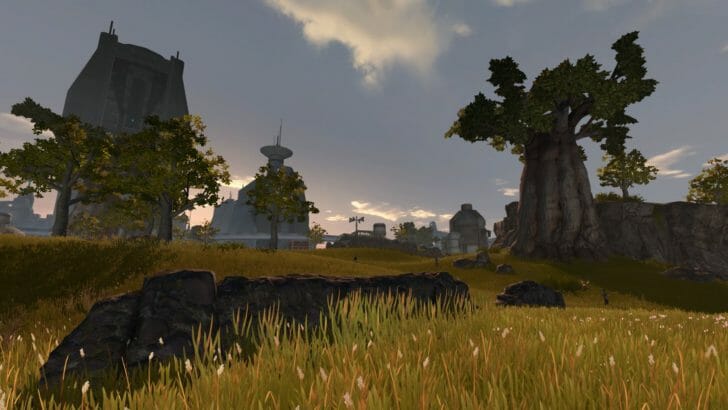 Long before outlanders began to inhabit the world, the native, near-human Dantari species roamed free – strongly built and versatile folk, specialised for foraging and hunting. Despite meeting settlers and off-worlders on many occasions, they maintained a technological ignorance – not aware of advances such as spacecraft for over 4000 years whilst the planet was occupied. The species were not even developed enough for agricultural subsistence to be a way of living – using the most primitive weapons to hunt their prey, moving camps at the end of each day to keep traveling in the hopes of one day reaching their destination…

The Dantooine landscape was split into several continents, inter-connected by a series of delicate land bridges – southern areas generally being more mountainous, in comparison to the plains of the north. Forests of large and spiky Bilba trees created effective barriers to decrease the interaction between Dantari tribes – in addition to providing settlers a secluded corner of the galaxy to remain off-the-grid…

However, despite Dantooine’s millennia long peace, the prospect of war finding its way to the planet was inevitable. It was during the reign of the Rakatan Infinite Empire, in which the planet was discovered and used as a subject world to build structures on – even long after the reign of the Rakata was over much of this infrastructure and droid technology remained as a permanent scar and reminder of dark times. It was not again until the Old Sith Wars, that Dantooine became an interest for outlanders once more – as the Republic military began a full colonisation of the tranquil planet. Despite the peaceful nature of the settlement – as all colonists were either civilians or Jedi – nobody could stop the Imperial interest in the planet. 350 years before the treaty of coruscant, the venerable Krevaaki master; Vodo-Siosk Baas successfully established a Jedi training enclave on the planet – of which many of the trained Jedi went on to become accomplished warriors and assets in the Great Sith War. 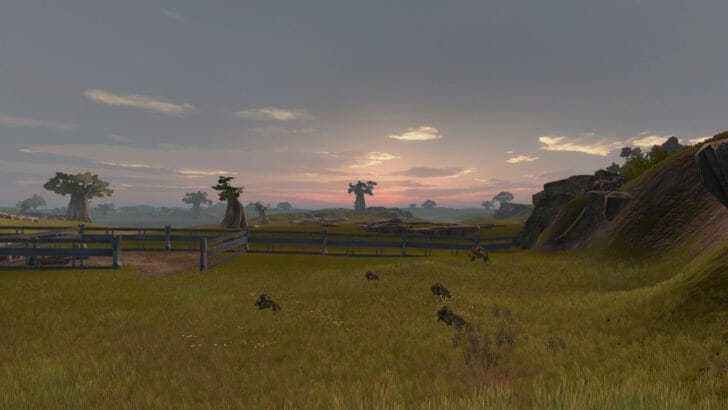 Much greatness and hope came as a result of the Jedi enclave in the northern fields of Dantooine – however, equally, the institution became gradually notorious for the number of trained Jedi that eventually fell to the dark side… Most famous of these being the likes of Darth Revan, Exar Kun and Darth Malak – although forty years after the birth of the enclave Revan was able to be redeemed, by Vrook Lamar and Bastila Shan as he was allowed to train for a second time.

The uncertain times were by no means over for the Jedi and natives on Dantooine… The terror of Darth Malak struck with full force once again – as he bombarded vast areas of Republic and Rakatan infrastructure. With their forces too thinly spread to be able to launch a successful counter-strike, the Jedi and the Republic were eventually forced off the planet, as the Sith Empire assumed control. After the eventual collapse of the imperial forces, the settlers of Dantooine led by Administrator Terena Adare were able to secure a peace and stability with a more distant Republic control than in previous years.

It was not just Imperial forces that continued the push to cut all Republic ties to Dantooine – as criminal and industrial syndicates such as the Exchange and the Czerka Corporation made an attempt to use the strategically placed planet as an outpost to assume further dominance in the outer-rim sector. It was only due to the efforts of valiant Jedi such as master Lamar and Meetra Surik that the Republic and militia were able to push the enemy forces out of the politically valuable outpost of Khoonda. For many years, the planet was under Jedi control – until the republic decided to withdraw its forces due to a diminished Jedi council size. 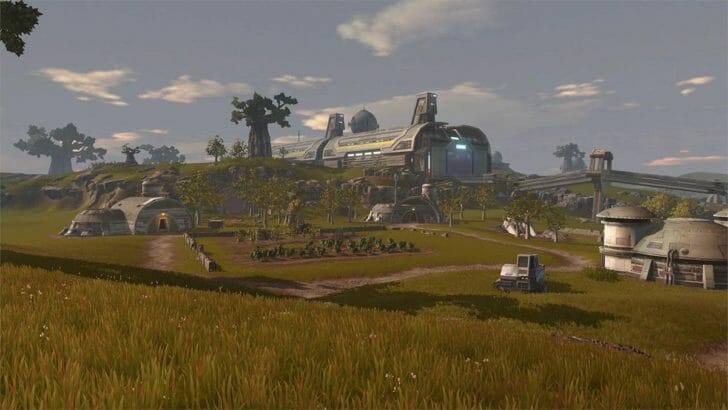 Once again, Dantooine is in a state of peace, free of war and violence… One might ask, how long will the planet stay this way? After a great war with Zakuul, the Republic and Empire are rebuilding their forces – scattered and diminished, it was a spark of hope on Ossus that has inspired the ancient order of peacekeepers to rebuild – perhaps it is time for the Republic to revisit their home on Dantooine?

As I close this holocron, and place it beside the others I have made, I hope that those listening from the future are able to learn from the mistakes of our past. I will carefully archive this recording between the fall of Ossus, and our knowledge of the Ancient Sith.

Thank you to Azilori for writing this Dantooine Star Wars lore entry and all players who shared screenshots of Dantooine from Star Wars: The Old Republic!