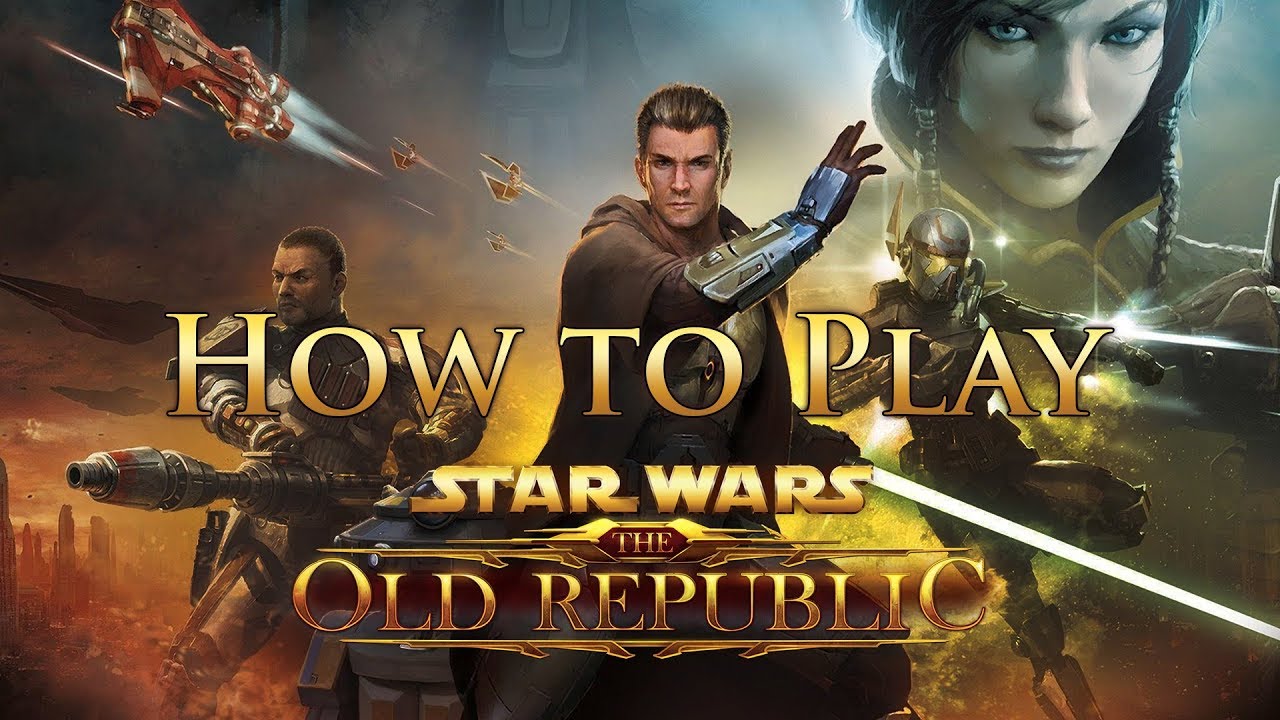 Welcome to Star Wars: The Old Republic. If this is your first online game, or even your first computer game, I’ve made this video to help you get started on your adventure. Unlike regular video games, massive multiplayer online role play games, better known as MMORPGs, are meant to be played over a large period of time, by many people all with different interests. This means that they’re a lot more complicated than most single-player games, and can be a bit more intimidating to get started in. Don’t worry though, The Old Republic is great for you if you’re interested in playing with others online, or if you’re planning on playing solo just to experience the great Star Wars Bioware storylines.

If you haven’t downloaded the game yet, all you need to do is go to: swtor.com/download

The core game is free – you can play up until level 50, and the main class storylines, without spending a dollar. The free version of the game is like a really expansive demo – it lets you complete the main storyline in full, but doesn’t let you participate in endgame activities. You will experience a few restrictions along the way, but they don’t hinder you from enjoying the main storyline and quests. After you reach level 50, or finish your main storyline, you can then decide if you want to subscribe to the game to unlock the later expansions.

The first step is creating your character. There are two factions in the game – the Republic, who are generally the good guys, and the Empire, who are generally the bad guys. On each faction you can choose from 4 classes, each with a unique story and combat style. If you’ve seen the Star Wars movies, you can play as a Jedi, or a Sith, or try out a technology-based character like the Smuggler or Bounty Hunter. One important thing to note is that this game is set 3,000 years before the movies take place – so you won’t be able to play as Darth Vader or Luke Skywalker. If you’re having trouble choosing a class, check out my other video called “Which class should I play?”

Once you’ve picked a class, you need to pick an advanced class. Your advanced class determines which combat styles you will have available. For example, if you choose the Jedi Consular as your class, you’ll generally focus on using Force powers over hack-and-slashing with your lightsaber like the Jedi Knight. From there, the Consular can pick between being a Shadow or a Sage – a Shadow can go into stealth to sneak past enemies or to get the upper hand in combat, while a Sage can use long-ranged force powers to heal or do bursts of force damage. Each class has two advanced classes to choose from, each with different roles available and didfferent combat abilities. Your class and advanced class choice is permanent – so choose wisely! Don’t worry though, even if you’re playing on a free account you get to make 4 characters per server, so you’ll be able to try out the different classes and advanced classes whenever you want.

The last step of creating your character is their appearance. A very cool thing about Star Wars: The Old Republic is that you get to see your character’s face as part of the cinematic cutscenes in the game. Every cutscene is voiced, so if you aren’t a strong reader or like watching movies, these types of cutscenes are ideal for you.

Once you’ve decided on an appearance, you get to pick a name for your character. You can give them a single name, or a first and last name with a space, and include up to two apostrophes and one dash. Players often find their ideal name is already taken… if that’s the case, give your character a last name, or throw an apostrophe in there… it’s actually a lore-friendly thing to do in Star Wars lore!

Once you’re ingame is where things can start getting a little crazy. You’ll get to enjoy your first cinematic cutscene as your character, and choose what you’d like your character to say and do. After that, you’ll be unleashed in to the open world, where things may start to get a little overwhelming.

Once you’re in full control of your character, you’ll see many different menus on your user interface. The good news is you won’t use a majority of these for a while – they’re often meant for higher level characters who are more experienced in the game. Your main goal is to enjoy the story, where you’ll grow in prestige and power as your new character.

Here’s the pieces of your interface you do need to know about.

This is your quest tracker. It’s usually in the top right corner, and shows you what step of your story you are on. If you are ever unsure what to do next, you can click on the name of your quest. Your main story quest will always show up in purple text in your quest tracker.

This is your mini map. You can open your full map by pressing the M key. M for map. Your map will show you in which direction you should head to complete your story quest. If you are ever unsure where to go, follow the purple markers on your map.

Some of your other keys on your keyboard will trigger different windows and menus. If you ever open a window you don’t want to, just press your Escape key on the top left of your keyboard.

Now that you know the basics of the game, you’re safe to move on to your first quest. Your quest tracker will tell you what you need to do, and your map will show you where to go. To interact with objects or people in the game, like taxis or quest givers, right click them.

Eventually you’ll find your first enemy. The good news is these are low level enemies that can’t do too much damage too you.. so don’t be afraid to jump right in to a fight! To tell if a creature is an enemy or a friend, click on the with your left mouse. If their name shows up in red, they’re an enemy! Be careful though, if you click on them with your right mouse and are playing a character with a blaster, you’ll use your first comat ability to attack them. Oops!

These are your combat abilities that you can use against enemies. As you level up, you’ll receive more abilities, and you’ll want to hover your mouse over them to learn exactly what they do. To use them, you can either click them while your within range of an enemy, or press the corresponding key on your keyboard – usually the number 1 – 9 at the top of your keyboard. If you’re ever unsure how to attack an enemy… you can run within range and press the one key. You’ll know your within range if your abilities start lighting up as you get closer. Some abilities can be used from far away, while others can only be used while close to an enemy.

When you defeat enemies, they may gain a glowing pillar of light from their body. This means that they have items or gear you can pick up from them. To pick the gear up, right click the body and take the items.

As the enemies become stronger, you’ll want to become stronger too. You get more combat abilities as you level up, but you can make yourself even stronger by equipping better armor. On your first planet, you may discover armor after defeating enemies. To check if that gear is better than what you are currently wearing, you will need to open your inventory by pressing the “I” key. I for inventory. You can then hover over your new-found piece of gear, and compare its statistics to what you are currently wearing. In general, if the stats of the new item show up as green, it’s better!

As you quest, you’ll also get other types of items in your inventory apart from gear. You can hover over them to see what they are. The most common type of item is trash picked up from enemies – these types of items, with a grey or white border, are simply meant to be solid to get money, which is known as credits in the game. To sell your trash items, you’ll need to find a vendor, which shows up as this credits symbol on the map. Right click the vendor, and click the sell trash button. You can also right click items in your inventory while talking to a vendor to sell them – you might want to sell any old pieces of gear you’ve picked up along the way. Or, if you like the way it looks, hold on to it!

Once you’ve got the basics of questing and combat down, congratulations! You’ll be good to go for the next 50 levels or so. I’m proud of you for trying out something new and I’m confident you’ll be able to figure things out as you go. Have fun out there!

If you enjoyed this video and want to show your support for this series, or want similar videos to show up on your youtube homepage, subscribe to this channel.

The additional parts of the game get more complicated as you progress. How do you gear up effectively? How do you get cooler outfits? How do you craft, play with others, get better at combat, fly in space, or get a speeder?

If you’re looking for more general tips about how to play the game, you’ll want to watch my two-part series, “[[[Tips video]]]”.

If you’re interested in a specific topic, like crafting or multi-player flashpoints, you’ll want to check out my series, The Academy, where I cover lots of different topics in the game.

Good luck, and may the Force be with you!