I recently played the Sith Inquisitor story and was intrigued by the Kaggath, an ancient rite that is invoked during the final act of the Inquisitory class story. I wondered what exactly the rules were, and if there were any other Kaggaths that had been fought in Sith history and what their outcomes were. Although the Kaggath does not have a set of defined rules written down in any Star Wars resources, there are many references to past Kaggath’s that give us a very good look at this ritualistic Sith battle and its devestating consequences. I hope you enjoy this short lore write-up! – Swtorista

A Kaggath is a contest of mutual annihilation pitting power base against power base. Whoever sheds the mods blood wins. To the victor, eternal glory. To the loser, death and shame. Forfeit, and be disgraced, hounded to the ends of the galaxy by every Sith in the Empire. A Kaggath is not the same as a duel to the death, nor a traditional war. It’s a battle of prestige, watched with interest by every prominent Sith in the galaxy, especially the Dark Council. It’s a battle for prestige as much as anything. Half-measures count for nothingin  the Kaggath.

The Kaggath is an ancient, but rarely employed rite of the Sith. One part duel, one part large-scale dejarik-match, the Kaggath pits Sith against Sith unto humiliation and death. The challenger sets the arena, whether a planet, a star system or the entire galaxy. The two combatants must then muster their full power bases to outwit and outmaneuver each other and defeat or win over each other’s forces.

Tulak Hord fought a Kaggath against his rival for fifteen years. A feast of souls. When it was over, he commanded that his dead rival’s name never be spoken again. Such is the disgrace of failure, the glory of victory. When he declared that the name of his opponent would be stricken from history – and his command was fulfilled. The Kaggath has the power not only to destroy an individual Sith, but to obliterate his entire legacy.

The original Citadel of Kaas City on Dromund Kaas actually mimicked the designs of Korriban’s Sith Academy and the Great Citadel on Ziost, but it was destroyed four hundred years ago when two members of the Dark Council fought an ancient Sith duel, called the Kaggath, on its grounds. The duel was a draw, and both of the combatants were executed by the remaining Dark Council members, who oversaw the rebuilding of the Citadel in its current form.

The Kaggath does not always have to be follow such strict ritualistic rules, and highly depends on the will of the two Sith participating. Darth Tormen was a pure warrior who preferred direct confrontation and brute force tactics to tiresome back-room scheming and political machinations. Years ago, the rash and ill-advised Lord Fatalissar shocked a gathering of Sith on Ziost by openly declaring a Kaggath on Darth Tormen while he stood within arm’s reach. Tormen responded with characteristic blunt efficiency. The moment Fatalissar defined Ziost as the Kaggath arena, Darth Tormen instantly lunged forward and beheaded his rival. The Kaggath was over in seconds.

Interestingly, there is some dialogue from a cut quest that talks more about the Kaggath and its consequences. “The Dark Council requires a small but important task from you. This report from the Dark Council must reach Lord Shalath at her research camp in the jungle. Unfortunately, Lord Shalath has declared a Kaggath against my master and his entire power base. Meaning should I appear in her sight, my life is forfeit. A Kagagth is a Sith affair, that tends to end with the death of a great many people on both sides. The Kaggath is rarely invoked. Two lords wage war through their power bases until one lord lies dead. The dead lord’s power base is then purged. You understand my hesitation to throw myself in the line of fire.”

(Sith Inquisitor Spoilers) After his defeat on Corellia, Darth Thanaton fled to Korriban, to seek the support of the Dark Council, which was always his plan if his Kaggath on Corellia failed. There he could be among allies, even though Zash’s apprentice seemed to have won the Kaggath on Corellia fair and square. Although Thanaton did have political allies on Korriban, he did not necessarily have any amongst the Dark Council, as the Council had been watching his Kaggath on Corellia and did not seem to be impressed by his defeat by Lord Zash’s apprentice, nor his abandonment of the arena for the Kaggath when he abandoned Corellia. The Dark Council chose not to directly support Darth Thanaton, betraying his long-standing loyalty to both the Empire and the Council.

(Sith Inquisitor Spoilers) Both Thanaton and Lord Zash’s apprentice attempted to plead their case and the justice of their cause, but the Dark Council did not care to listen or judge – instead they questioned why Darth Thanaton had not simply killed Zash’s apprentice. Darth Thanaton stated that he wished to follow the Kagath and its proper rites, as it was an honored tradition of the Sith, and that even the great Tulak Hord, Mark Ragnos and Ludo Kresh competed in a Kaggath in the past. While other Sith may choose to ignore the traditions of the Sith and its history, Darth Thanaton was the Dark Council member in charge of the Sphere of Ancient Knowledge, in charge with keeping the mystical knowledge of the Sith and and guarding the secrets of the order, and of all Dark Council members Darth Thanaton would be the least likely to simply murder his enemies. 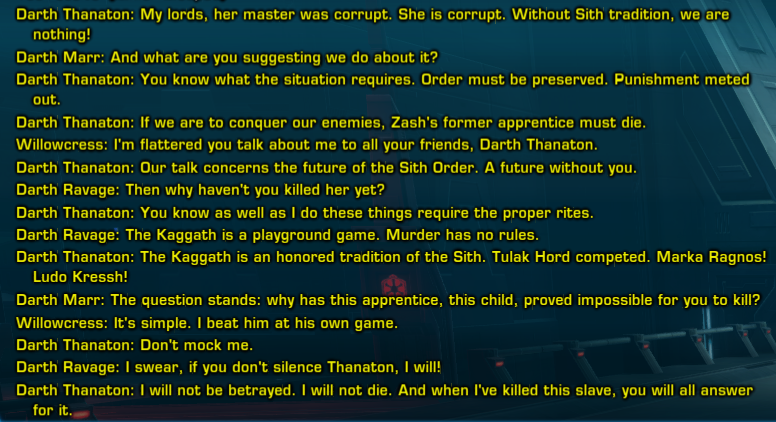 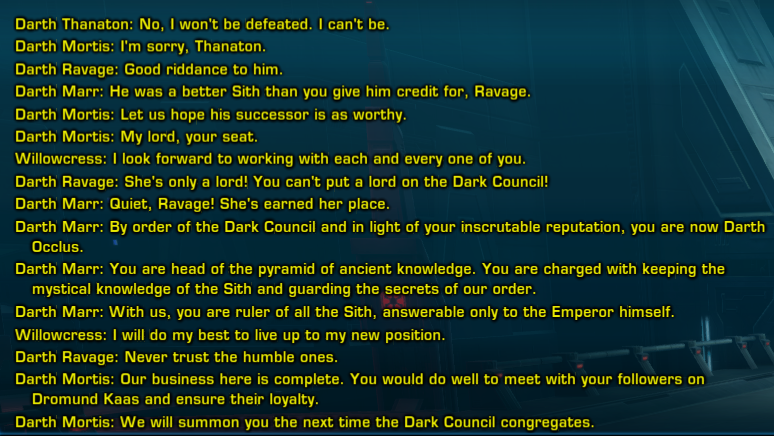 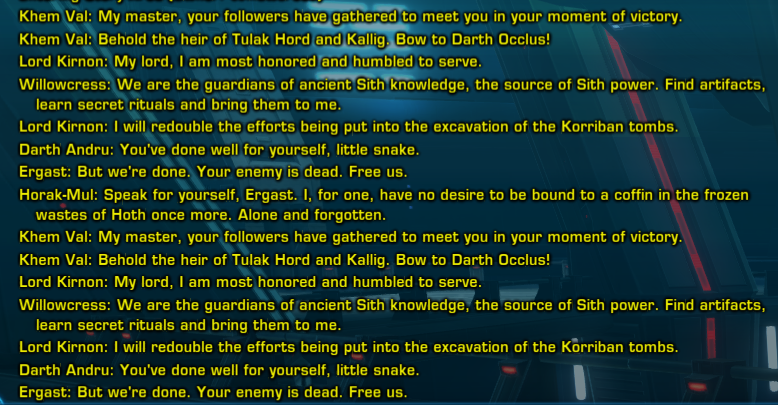 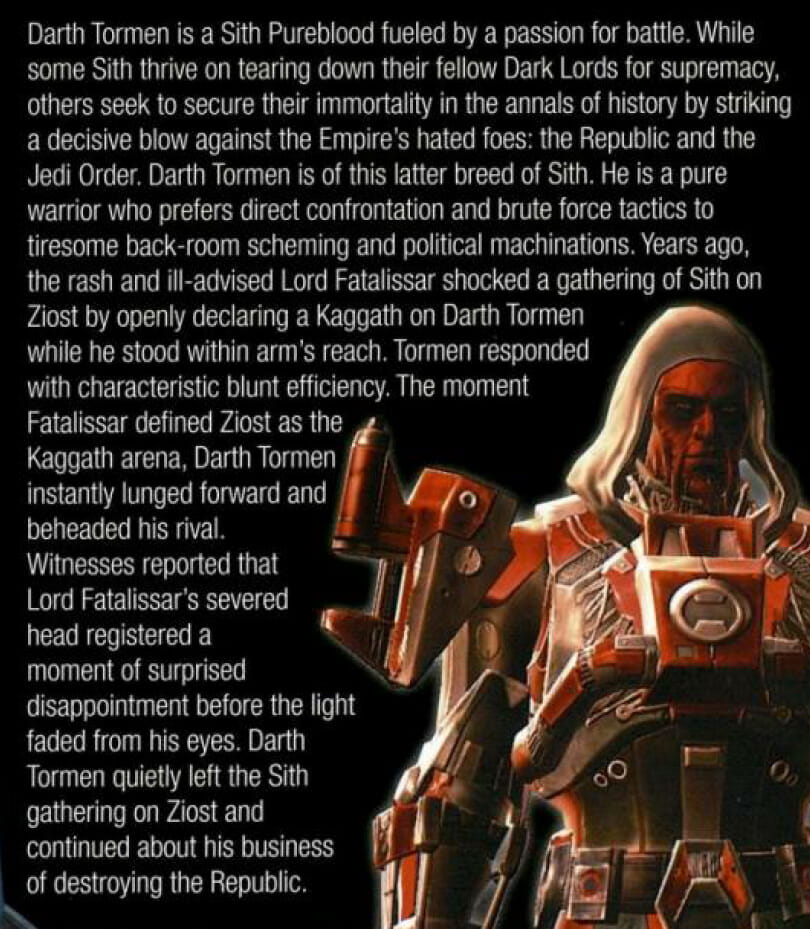