Your server in Star Wars: The Old Republic determines who you can play with in the game – if you’re not on the same server as another player, you won’t be able to play together. If you are a new player and are creating your first character, the game will automatically choose a server for your to play on, and may not even show you the selection screen for you to choose a server.

However, if you’re a more experienced gamer, and would like to choose your own server, or are looking to transfer to a different server, here are a few important things to consider for the best gaming experience.

What servers are there?

There are currently five servers in the game. There used to be more, but they got condensed down, and the current servers are kind of like mega-servers – they can hold more people on one server than the old ones. The old servers were divided by what type of content you liked, for example there was PvP or RP server, but now the servers are just divided by location and language.

You can choose any server to play on – even if you don’t live in that location, or speak that language. You are not restricted based on where you are playing from. So if you have friends on Darth Malgus, the European server, but you live in New York, you can still go create a character on their server.

Can I play on more than one server?

Once you pick a server, that character is restricted to playing with characters on that server – there is no cross-server playing or queuing. So if you have friends on a specific server, you’ll want to create a character on their server.

If you accidentally chose a server that wasn’t a good match for you, or you maybe made friends on a different server later on, you have two options:

Now that you understand how the servers work, let’s talk about choosing a server, especially choosing your main server – the one you’ll want to play on the most.

How do I choose a server?

If you are starting your very first character, the game may bring you automatically to the character creation step. If it does, you can press the white “Exit” button on the bottom left, which should bring you back a step and allow you to manually pick a server. You may need to click the blue “Create Character” button if you don’t see the white Exit button yet. 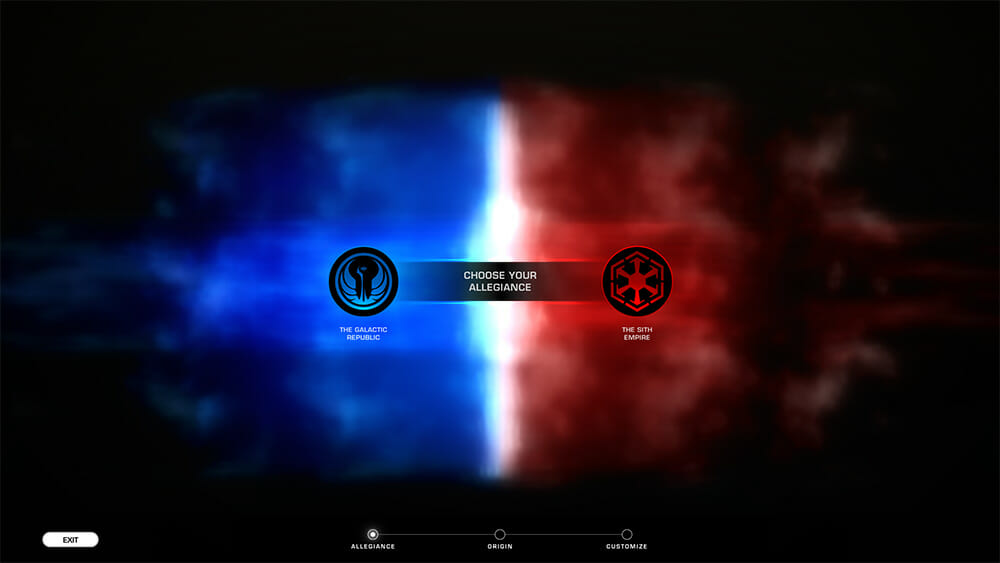 If you already have a character made and are starting off on the Character Select screen, there is a very tiny button on the bottom left that looks like a cube with tiny dots beside it, located in the bottom left, that will bring you to the Server Selection screen. 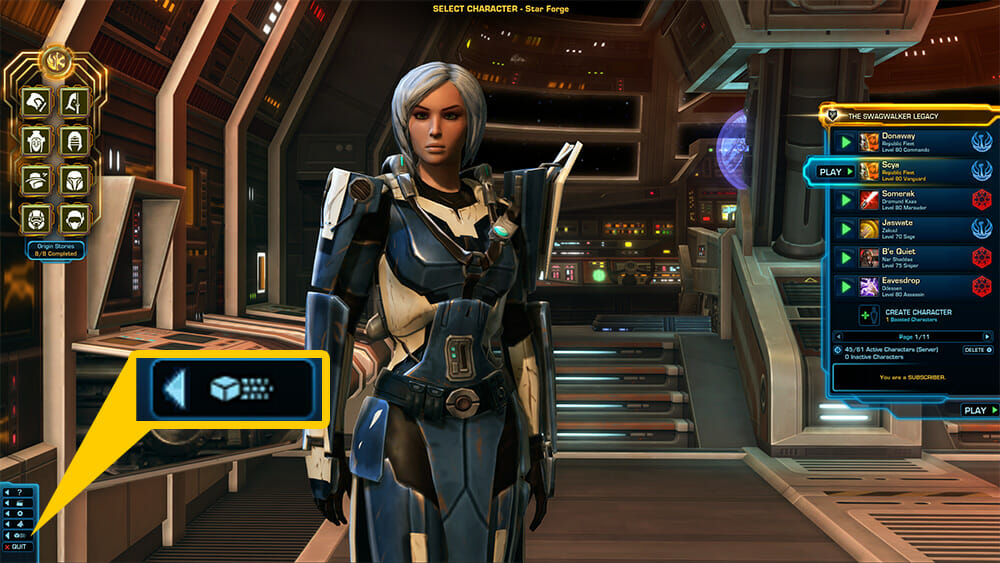 Which server should you choose?

Which server you should choose will depend on who you want to play with, what language you speak, where you live, and when you play.

My biggest recommendation when it comes to choosing a server is to pick a server with players on it who you want to play with. There’s a ton of fun group content in the game, and it’s way more fun to play it with players you know.

If you have friends already playing, ask them what server they are on and choose that server, even if it’s not the most optimal server otherwise.

If you’d like to find a group to play with before you pick a server, try checking out the SWTOR Guild Finder and speak with guilds you like, and then you’ll have a guaranteed home wherever you make your character.

While it should be pretty obvious, the most important thing when it comes to picking a server is the servers language. If you speak English and pick a non-English server, you’ll struggle to communicate with other players in-game, whether you’re looking to run group content, or just want to ask a question or sell something in chat.

If you do not speak English, you may way to try first finding a guild or group of players that speak your language, and then join them on whatever server they’re on.

Once you’ve figured out which servers speak your language, the number one thing to consider when choosing a server is its relative location to where you are playing from.

The physical distance from the game’s server to your computer will affect your latency – the time it takes for information to pass between your computer and the game’s servers. The farther the server is from where you are, the worse your “lag” will be. In gaming, lag is the delay between your computer and the server trying to communicate with each other – for example, if when you press your abilities, there’s an unexplained delay before they go off, that’s usually lag. Another commo way players see lag is when moving around – if you’ve ever been rubber-banded around the map, or seen another player bounce around or teleport, that could also be lag. Apart from being annoying while playing, higher lag can make going into more difficult content tricky – you may have stepped out of the fire on your computer, but the server may not get that informatiion on time to save your life. 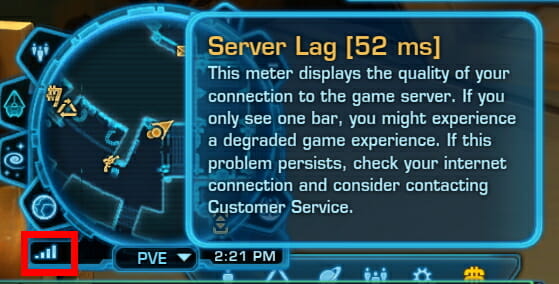 You can very easily check your server latency in-game. Once you are logged into a character, you can mouse over the small symbol of a bar graph near your mini-map. This tooltip will show you your server lag. 15-60 ms is fairly average and stable. ms climbing into the hundreds can be managed but may feel less fun to play, so ideally, you’d choose a server with a lower ms. All servers will have some latency, but especially if you have slower or less stable internet, choosing a server with better ms can help your game run more smoothly.

Examples of my ms, playing from Los Angeles, California, on the Fleet:

If you’re trying to play on a server with higher ms, for example you are a European player trying to play with American friends, there are some things you can do to help make your gameplay smoother, even if you can’t fix the lag itself.

Some servers, due to where they are located or who populates them, will be busier during different times of the day. A server’s “prime time” is usually in the afternoons and evenings, when players get off school and work for their timezone.

If you play at unusual times, for example in the morning or late at night, your nearest server may feel less populated as players are sleeping or working. For people playing in North America late at night, or very early in the morning, if your lag is at an acceptable level, consider trying an EU server and seeing if their “prime time” for population is more in-line with when you play!

Star Forge was originally made up of an East Coast North America population, while Satele Shan was originally on the West Coast, and while the servers are no longer in different locations, the player base is still often split between timezones.

This data is from the SWTOR Guild Finder, based on when guilds on these servers say they are most active!

Before the server merges, servers were divided by activity – there were PvE servers, PvP servers, and Roleplay servers. Now, all servers accommodate all playstyles, and they are only divided by language and region. I’ve sometimes heard Satele Shan referred to as the North American PvP server, and Star Forge as the North American PvE server, but with that said, I usually don’t have to wait too long to get a pvp match even on Star Forge during my wierd playtimes. In the end, there’s no official way to track which server has faster warzone queues or runs more operations. While I don’t have any official numbers, at least for North America, Star Forge does seem to be more populated and more active, though Satele Shan seems to be fine as well. For Europe, players recommend picking Darth Malgus if you can speak English and are looking for the most active server, as both the French and the German server tend to be less populated, with the French server being quite quiet.

With the servers being merged, feel free to pick your server based on other factors – you’ll be able to PvP, RP, and PvE no matter which you choose.

I do have a little bit of interesting data though! These are the counts for guilds in the SWTOR Guild Finder – guilds can voluntarily list their actively recruiting guild, and mark what types of activities their guild enjoys, however I don’t have data about unlisted guilds or how many people are active in the listed guilds.

Roleplay has shifted a lot in the game since its launch. During the first half of the game, it was common to see large groups of players roleplaying out in the wild. These days, apart from those roleplaying in the cantina in the center of the fleet, most roleplay happens in private instances and guilds rather than out in the open, and some players have migrated away from roleplaying in-game all together, and instead roleplay through text chat only with programs like Discord.

What server is Swtorista on?

I play on the Star Forge server! I think it’s a great choice for North American players, and seems to be more populated than Satele Shan, though I don’t hear too many complaints about Satele Shan compared to Star Forge.