In this video, we’ll be going over how to earn the secret Orokeet pet. If you want to find the pet yourself I’ll give you the spoiler-free version first: 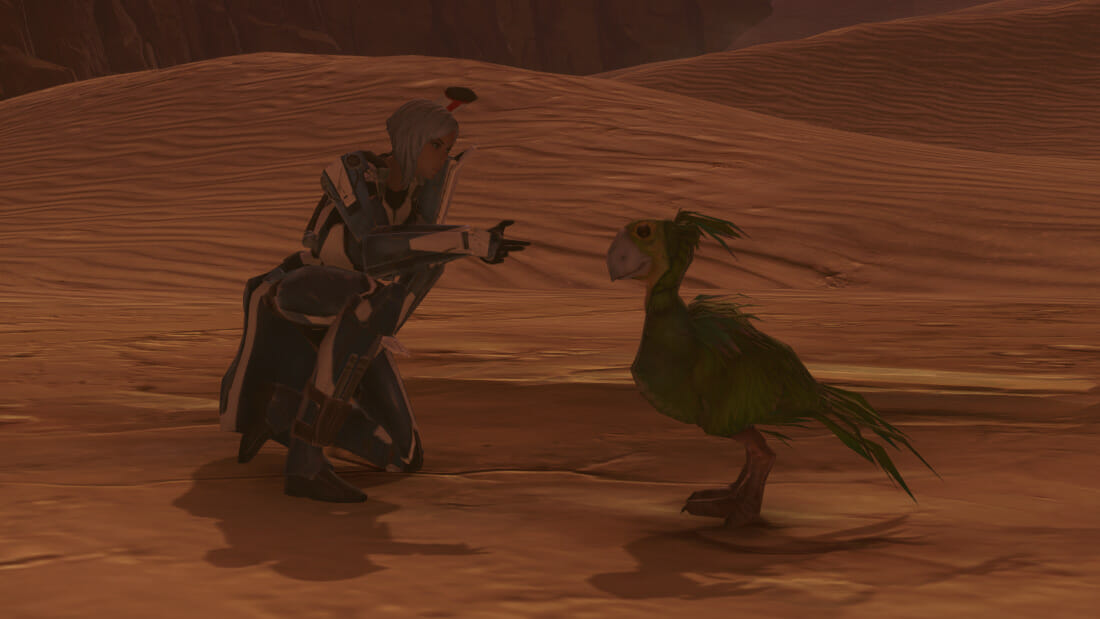 First you need to acquire an orokeet egg, which are hidden in nests on Alderaan, Imperial Balmorra and Republic Taris – but if you don’t feel like hunting for eggs, you can often find the Unusual Egg for sale on the GTN from other players who found the eggs and are now selling them. There is also a second egg you might be able to find on the GTN – the Mysterious Egg. This egg is a rare reward drop from the last boss of the Lost Island Flashpoint on Master Mode. If you buy or find a Mysterious Egg, you hatch it the same way as the Unusual Eggs hidden around the galaxy. The eggs can bought, sold and traded, but the actual pets are bound, so if you want to do this with a friend make sure to give them an egg.

One important thing to note is that the hidden eggs only respawn every few hours. This means if there’s no egg, then you’ll need to come back later or check a different nest. You can also try changing instances on your map and see if an egg shows up that way. Fun fact, if you pick up an egg and your inventory is full, you’ll get the egg in the mail.

The planet with the most eggs is Alderaan. There are three nest locations across the planet.

The first nest site is east of Kaamos Territory and north of the Juran Mountains. 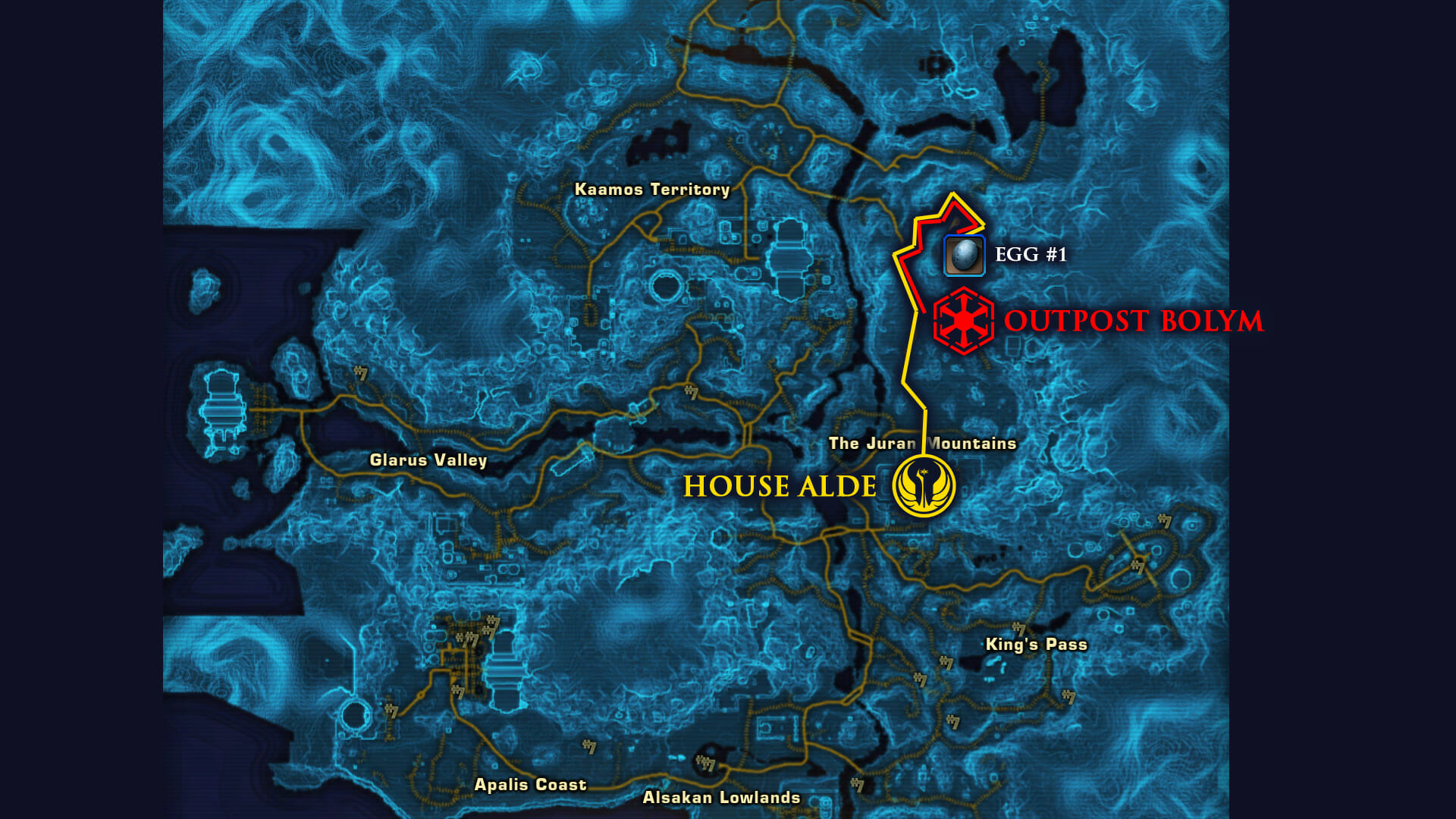 Imperial side, this is probably the easiest Alderaan egg to get to. Take a taxi or quick travel to Outpost Bolym on the right-hand side of the map. Once there, head north up the main path.

Republic side, this egg is a really long walk so you might want to check the other nests first, but the nearest quick travel and taxi point is House Alde Library on the right hand side of the map, and from there you’re going to run really far north along the path until the map turns in to Kaamos Territory.

Shortly after the map changes to Kaamos territory as you head north on either faction, you’ll see a small split in the path – on the left will be a brown path in snow, and on the right will be a path completely covered in snow. Take the snowy path to the right, and when you start seeing lots of Killik bug enemies, keep taking the paths that lead steeply upwards and you’ll wind up at a cave entrance for the Anzaada caverns.

Once you’re through the cave, keep walking forward until you see a building with a hexagon beehive pattern. There’s actually two nests up here. For the first one, directly across from the beehive building there is a snowy path with rocks on both sides. If you climb up on the rocks on the left, and jump along them, you will be able to get to a secluded snowy area. On the left of it, overlooking the path you took out of the cave earlier, there is a nest you can fall down to. The second nest trail starts near the beehive building as well, but instead of jumping on those rocks, look for a long sloped snowy pile and jump up on it and walk upwards and start climbing to the very top of the mountain. Once you get to the top, head downwards to the right – there is a nest hidden above the main entrance to the caverns.

The second egg is a bit trickier and you will need a MGGS – a Magnetically Guided Grappling System which you can pick up from a vendor hidden in the Juran Mountains. If you don’t have one yet, on Republic side travel to House Alde Library by taxi or quicktravel, and then start heading south. This one’s easier to show on a map. Imperial side, quicktravel or taxi to Outpost Talarn and head south, it’s really close by. 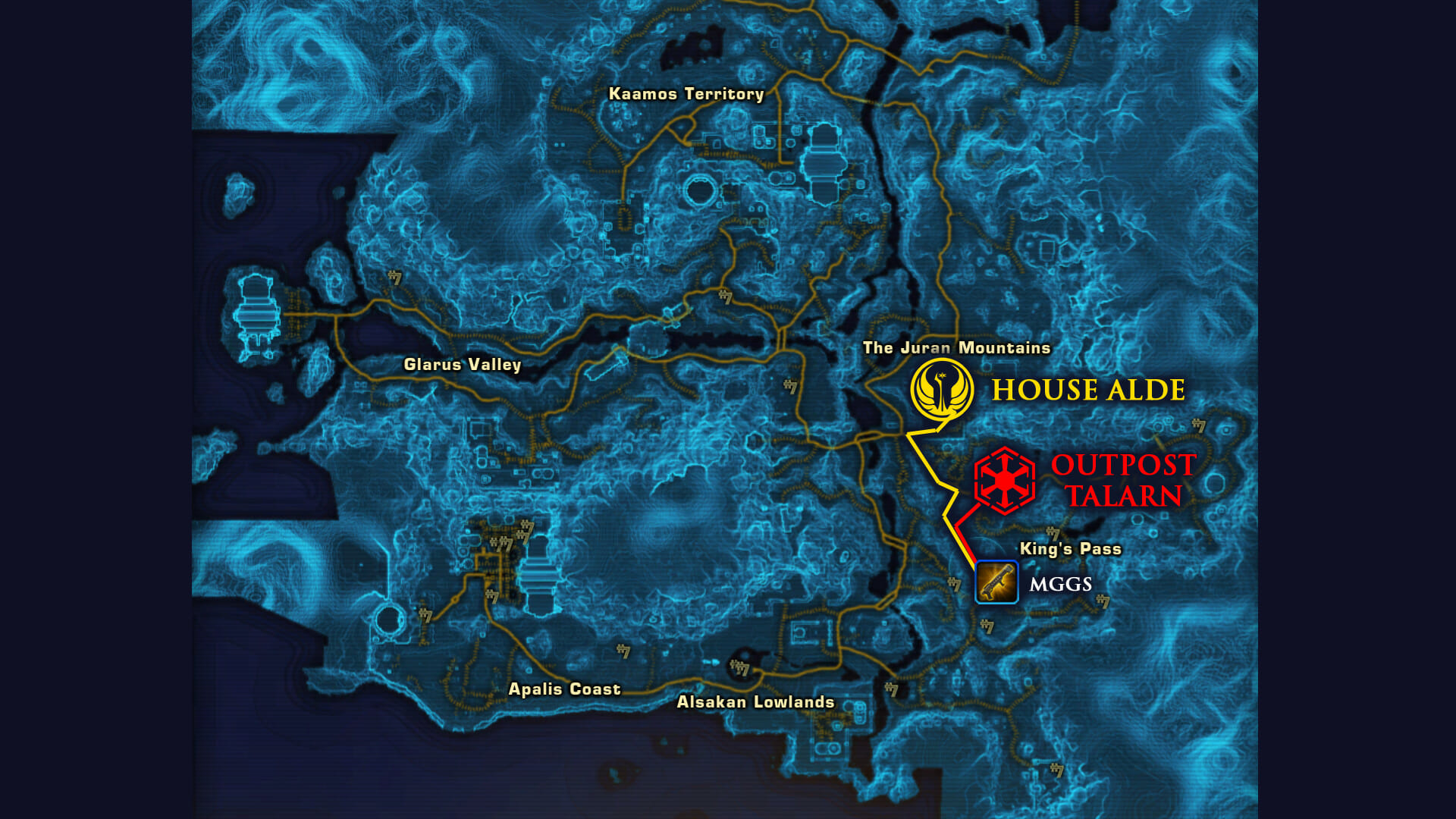 While you’re there, you might also want to pick up an NVSCCS to catch a baby taunlet in a different quest on Hoth, and a Red Detonite Actuator which is part of finding a datacron hidden on Alderaan. The MGGS item is actually used for multiple secrets in the game, including the orokeet eggs and datacrons, so don’t throw it away when you’re done with this quest! There’s a fun little grapple hook near the vendor if you want to test it out – to use the grapple points which are called Magnetic Stabilizers, right click them while you have the MGGS in your inventory. 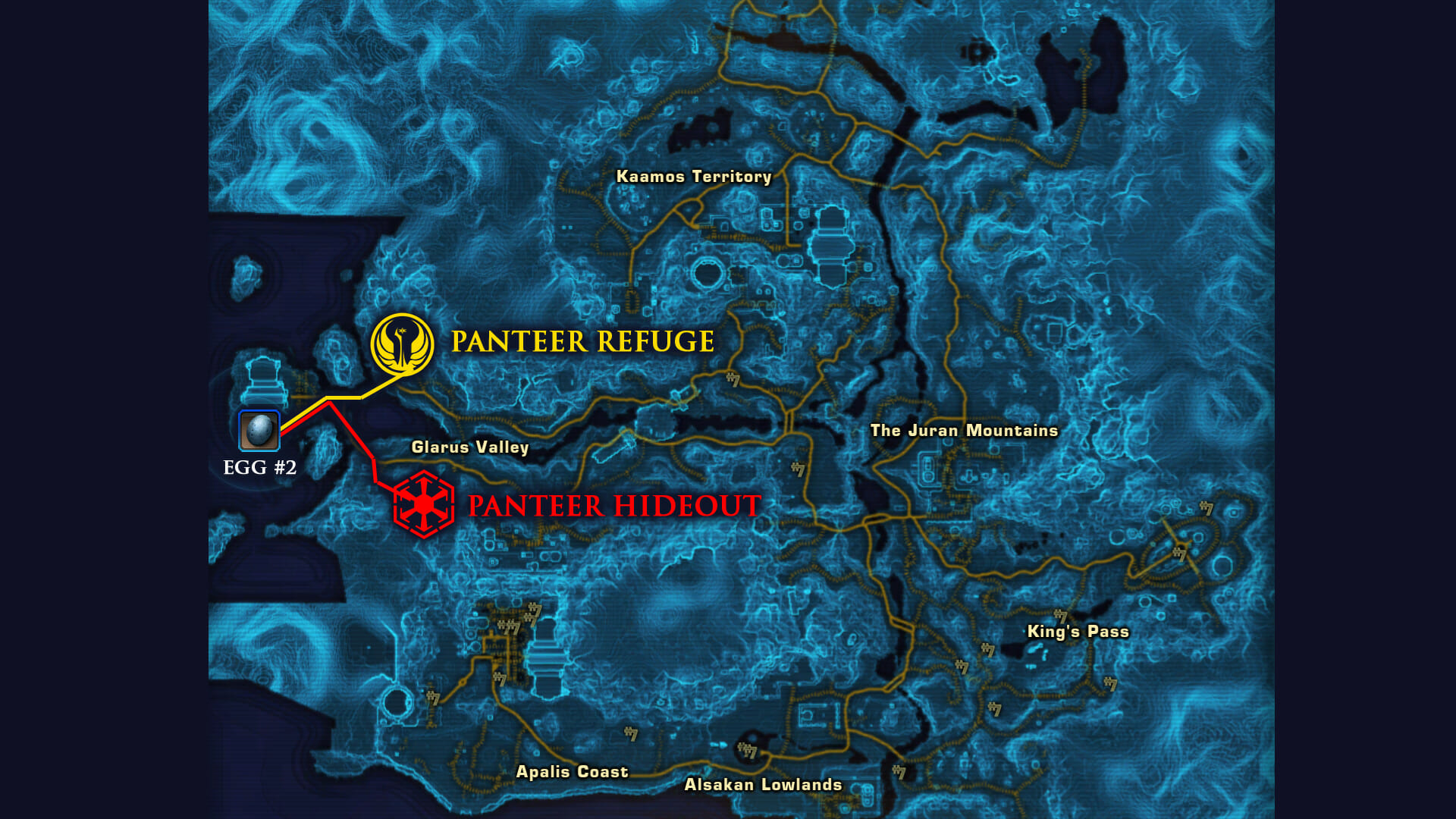 Instead of going in to the castle, go around it to the left where the castle is partially destroyed. What you’re looking for is a glowing blue Magnetic Stabilizer panel you can right click. If you have a grapple hook, you’ll grapple yourself up to the panel. The first grapple hook point is at the back of the castle, and the first nest is right beside it. The other nest is a bit deeper in the middle of the destroyed area, look for another Magnetic Stabilizer field to grapple yourself up, then walk up along a beam to the second nest. I was having a weird problem with this grapple hook point because it kept visually disappearing if I wasn’t close enough, but if you run up the pile of rubble you should be able to see it.

The easiest egg for Republic players to find is on the Alsakan Lowlands, which Republic players can get to by quick traveling to Wardpost Duval or by walking east along the path on the map they load in on. Imperial players can get here too, but it’s a pretty long walk and the nearest quicktravel point is probably Outpost Talarn or the Thul Supply Camp. The nests are hidden off the side of the cliff where the broken bridge is on the west side of the map. 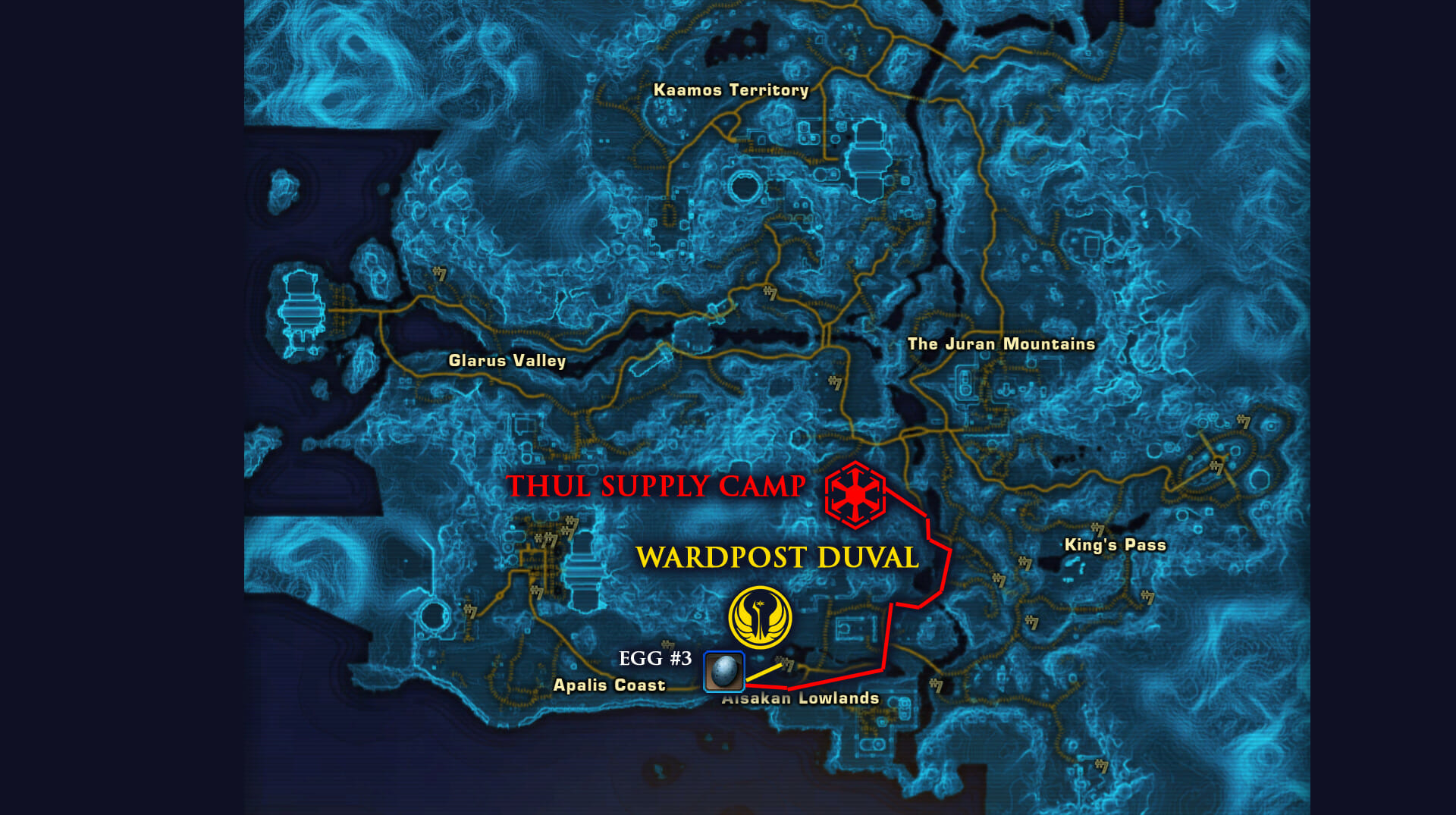 There’s two nests here. The first you can get to by just falling off the edge of the cliff parallel to the broken bridge pieces. The second can be gotten to by falling off a cliff under the lower half of the broken bridge on to a log. If you’re struggling to fall correctly, you can turn on the “walk” key – it’s the / slash key on your keyboard above your number pad, and it will make you walk slower and be more precise when falling. If you picked up an MGGS earlier, and want to check both nests here without having to travel back again, there’s actually a hidden Magnetic Stabilizer underneath the lower half of the broken bridge. To get within range, carefully climb up the closest log!

There’s another nest hidden on Taris, but it’s only available to Republic players – on Imperial side the area still exists, but there’s no nests. To get the Republic Taris nest, head to the farthest east speeder point or quicktravel to the Brejik’s Run quick travel point on the right hand side of the map. You’re trying to get on to a pipe that’s just north of the Brejik’s Run Outpost speeder. There will be a pipe touching the ground slanted upwards you can climb up, then you’ll jumping a few platforms to the right – you don’t need to keep following the platforms as they wrap around the wall. At the end of the platform there’s a little tricky jump, but once you’re across the nest is in the grass of this hidden area.

The final nest is hidden on Imperial Balmorra and is very easy to get to. Take a taxi or quick travel to Vanguard Outpost, the farthest left point on the map, and then head west. When you reach a giant lake, the egg is over some rocks to the right. If you see a giant creature named Grandfather, don’t attack it, it’s a world boss!

The second step is to protect yourself from the desert’s harsh heat. You’ll need to find a Moisture Vaporator tower, and click on the small glowing blue Water Access Panel to get the special “Refreshed and Sustained” buff that lasts about 30 minutes. Much like the eggs, if someone uses them they take some time to respawn – so if you don’t see the blue panel go looking for another vaporator. These Moisture Vaporators are hidden all over Tatooine. Republic side, I found it very easy to find Moisture Vaporators all over the main city of Anchorhead where you load in to Tatooine. Imperial side, I thought I found vaporators in Mos Ila but none of them had blue panels. There’s two you can find in the middle of Outpost Varath, another in Mos Anek, two above Outpost Rennar, all of which you can easily taxi or quicktravel to.

Now that you are protected from the heat, you’ll be heading deep in to the desert. Republic side, taxi or quick travel to Outpost Thorazan, Imperial side travel to Outpot Zaroshe. Imperial players will run straight west from Zaroshe, while Republic players will need to head far south west. What you’re looking for is the entrance to an underground bunker surrounded by solar panels. To heat up and hatch your egg, bring your egg under the small building made of solar panels. If you have the “Refreshed and Sustained” buff from the moisture vaporators, wait under the solar panels with the egg in your inventory for about half a minute, and eventually your egg will hatch in to an Orokeet in your inventory! 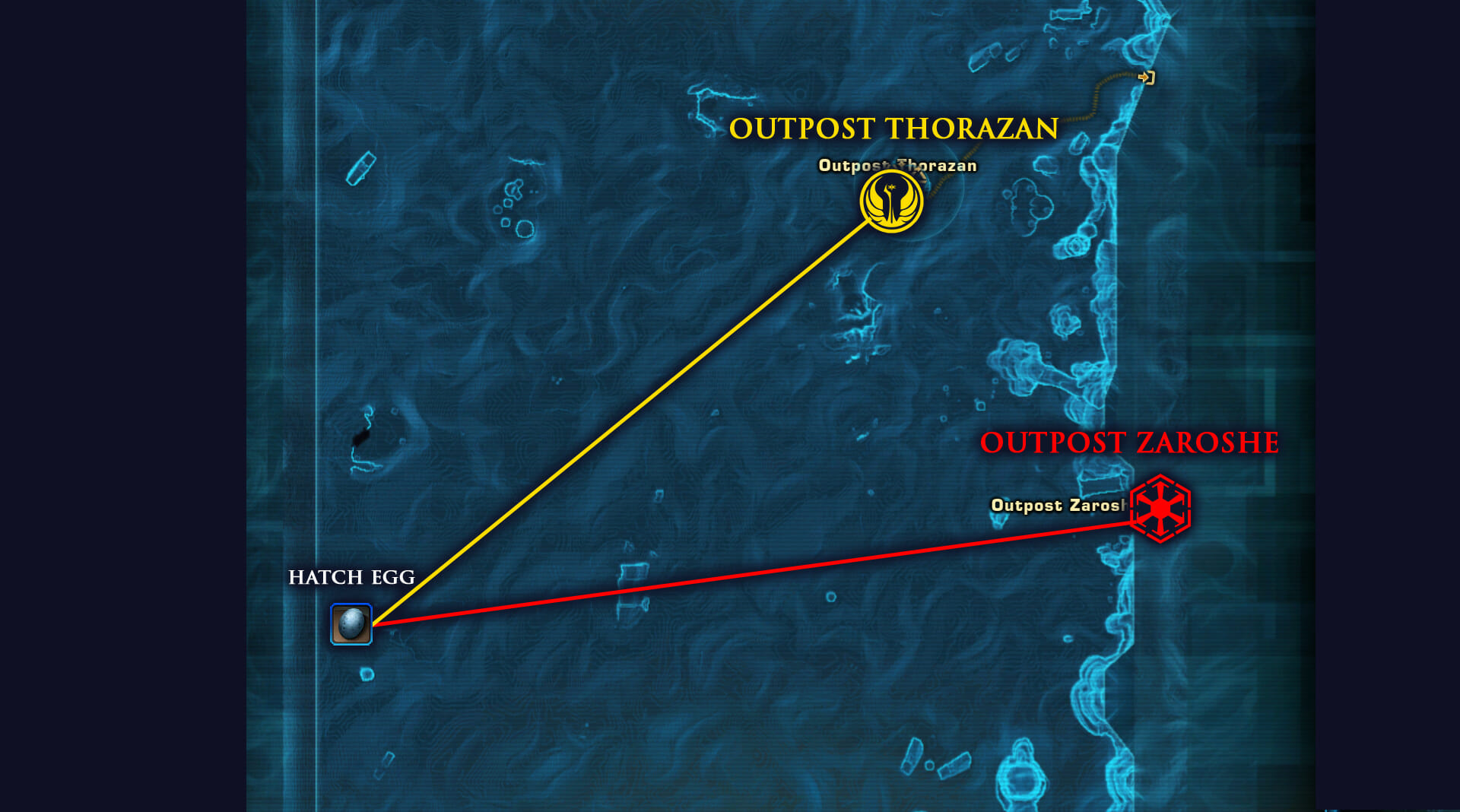 The Orokeet from the Unusual Egg and the Orosquab from the Mysterious Egg aren’t the only oro birds in the game. You can get a third orobird pet called the Crested Orokeet from a vendor in the Cartel Bazaar elevator of the fleet for only 50,000 credits. You can get a fourth orobird pet called the Orochick from the light side vendor for 5 Light Side Tokens. On top of that, if you’re feeling you need more orobirds in your life, there’s also a bunch of different orobird cartel market mounts.

PS wear this to match your orobird 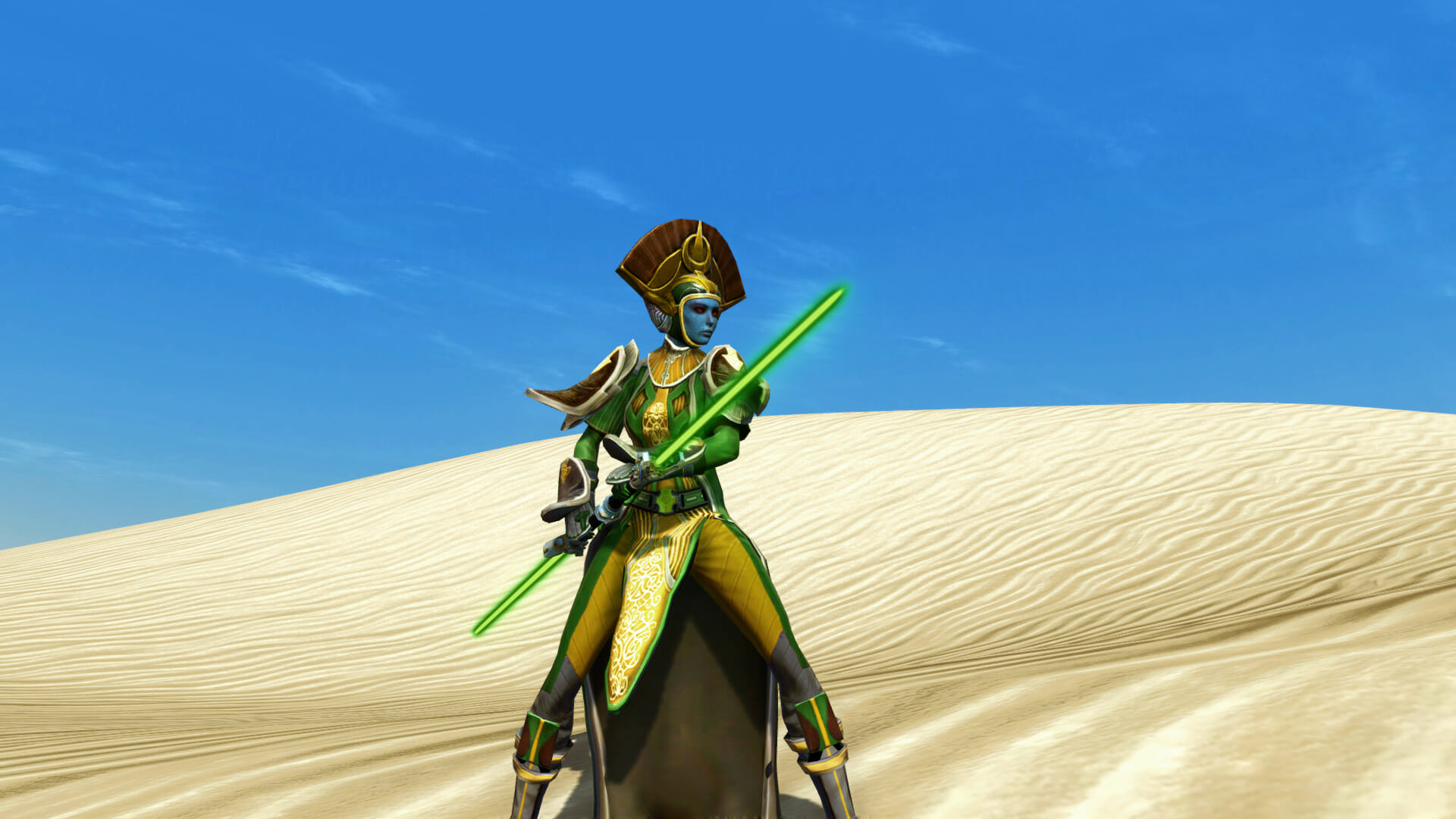