Humans are the most common species across the entire galaxy, and the “default” species for players in Star Wars: The Old Republic.

Even in a galaxy of countless stars and planets containing potentially millions of species, one can find humans just about everywhere. Some say humans were the first explorers to venture out into the darkness of space before the dawn of the Republic. They say these early humans were bold explorers who colonized the rest of the galaxy while most species were still striking flint to rock. Others, notably early spacefaring pioneers like the Duros, claim humanity simply has a penchant for expanding as fast as possible and sticking its collective nose where it doesn’t belong.

You can play any type of character as a Human, as species are not restricted to certain Origin Stories or Combat Styles in Star Wars: The Old Republic.

Humans are available to all players.

No unlock or subscription is required to make a Human character.

It is common to find any class or origin story played as a human character – humans have spread into every facet of intergalactic society, from Imperial Intelligence to the Jedi Order.

There are a few cool appearance options that are locked to specific classes – for example, Human Troopers can get some cool military-themed tattoos, and Human Bounty Hunter can take advantage of some hunter-specific face paints and war paint designs.

Humans are considered the baseline for all the species – they have skin tones, eye colors, and hair styles similar to humans outside of the Star Wars universe.

As Human fall to the dark side, they have the option to turn on Dark Side Corruption, where they lose pigment in their skin and their eyes turn orange. 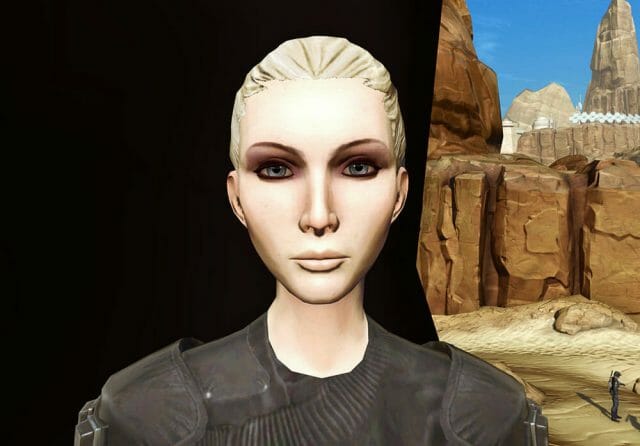 No Dark Side corruption 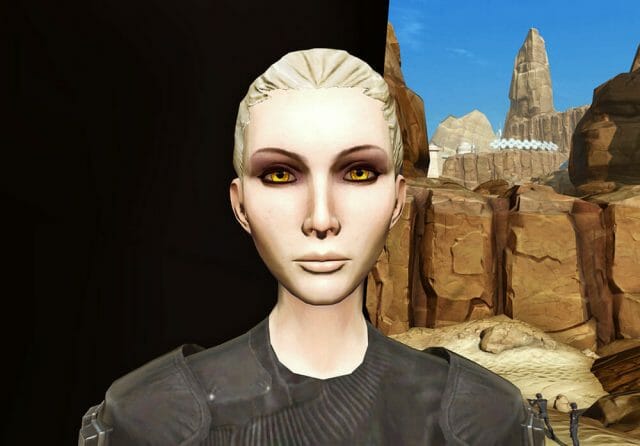 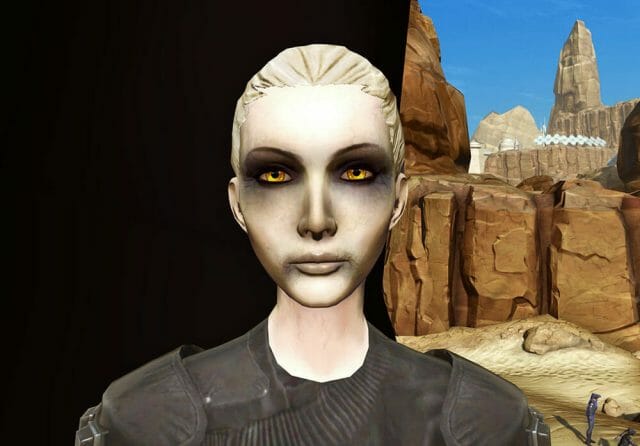 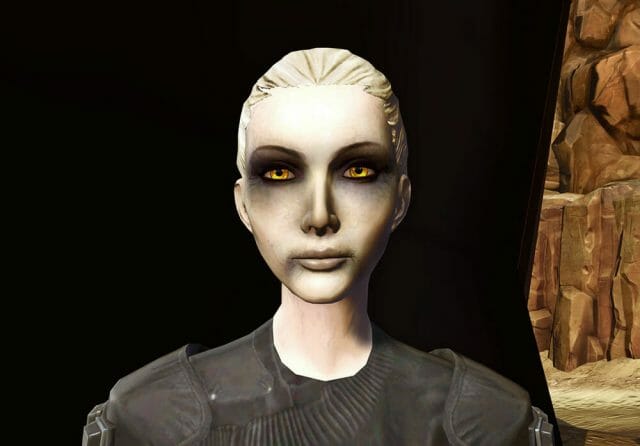 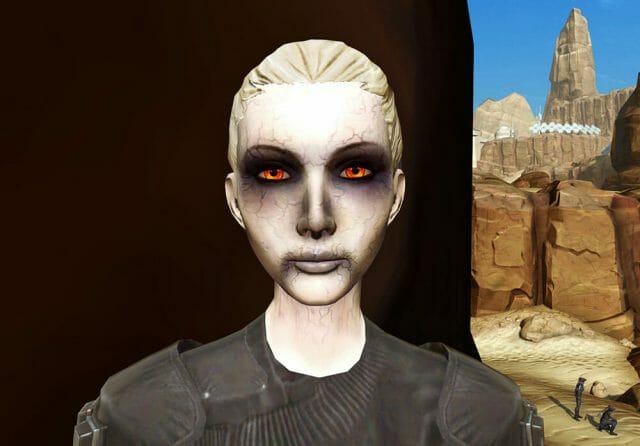 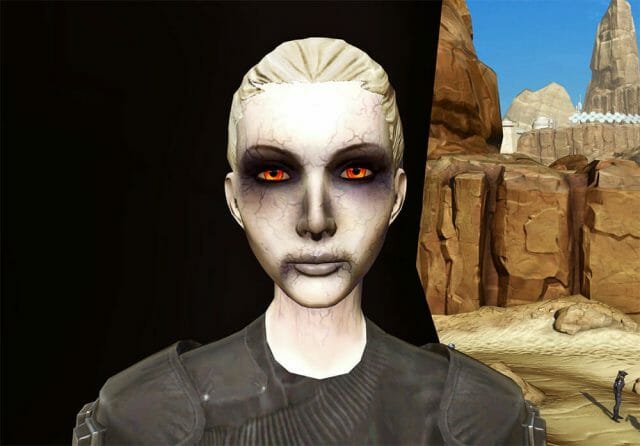 You can choose any name you want for your Human character, as humans have the most wide-spread set of cultures and identities compared to many other species in the galaxy, many of which hold traditions from their alien homeworlds. Some humans keep the name they were given at birth, while others take on nicknames. As your human character may come from any planet in the galaxy, including homeworlds that are primarily made up of aliens, you may want to choose where your character is from and then see if there are any naming traditions for that particular planet. For example, if your character is from Alderaan, you may want to place them in a noble house, and give them a last name that matches.

Star Wars has a tradition of taking traditional names and changing them slightly. For example, “Ben” might become “Obi-wan”, “Leigh” might become “Leia”. Other names are short and sweet but are completely unrelated to common real-life names – like “Han Solo” or “Boba Fett”.

You can give your character a single name, a first and last name, a nickname, or even a name meant to inspire fear.

To create a name, you can try the Human Name Generator by the creator of Fantasy Name generators.

Here’s a very short list of some well-known human names.

Humans dominate the Core Worlds and can be found in virtually every corner of the galaxy. They are the ancestors of early spacefaring pioneers, conquerors, traders, travelers, and refugees. Humans have always been people on the move. As a result, they can be found on almost every inhabited planet. As a species, Humans are physically, culturally, and politically diverse. Hardy or fine, light-skinned or dark, Humans remain one of the most dominant species throughout a eras of play.

As humans are the most common species in the galaxy, if you are choosing your homeworld for your human character, you’ve got a lot of places to choose from. Some popular choices include..

There are many other planets your human could have been born on, though it is less common as many world are sparsely populated, like the planet of Ilum, or are mostly populated by military personal to guard resources, like on Hoth.

Space travelers have a saying: “There’s a human on every planet.” Although not entirely true, humans are easily the galaxy’s most ubiquitous species. With a capacity to adapt to new worlds, assimilate with alien cultures, and an unmistakable affinity with the Force, humans thrive in many environments that others species find hostile or unpleasant. While the Sith Empire is dominated by humans, even the inclusive ranks of the Republic are often filled by the adaptable human species,

Nowhere is human adaptability more apparent than within the Sith Empire. Millennia ago, human Dark Jedi ventured to the Sith homeworld of Korriban and intermarried with the powerful Sith species. Over the centuries, human bloodlines mixed with the Sith to form a new, mostly-human Species known as pureblood Sith, distinguished primarily by red skin and facial tendrils. Others lost their Sith features entirely to appear as humans with only a faint trace of Sith blood linking them to their ancestors. Today, the Imperial military is staffed almost exclusively with humans, and the Empire remains strongly biased against other species.

Humans are the most common form of sentient life in the galaxy. Characterized by an exceptional degree of adaptability, they have come to reside on most of the galaxy’s habitable worlds. Human cultures have explored much of the galaxy and established many colonies.

Humans are oxygen-breathing omnivores, capable of consuming a broad range of animal and plant products for food. A mammalian species, they have internal biology adaptable to a wide array of environmental conditions, and they tend to use clothing and technology to further extend their ability to survive and thrive in all sorts of places.

Human cultures invented Basic, and many use it. Some cultures, however, may speak different dialects of Basic, or entirely unique languages.

Perception of the Force

Humanity exhibits a broad range of attitudes toward the Force. Some deny its existence completely, while others insist on seeing its influence upon all things. Extreme attitudes can often exist together, even within the constraints of a single planet’s culture.

He liked being anonymous; it was one of the reasons he had settled on Coruscant. With one trillion people it was easy to blend into the crowd. That was even truer here in the Galactic Market, the most cosmopolitan section of the Republic’s capital world. Merchants and shoppers of virtually every known species gathered to conduct commerce in a kaleidoscope of colors, shapes, and sizes. Red-skinned Togrutas intermingled with blue-skinned Twi’leks; diminutive Sullustans haggled with massive Hutts; fishlike Mon Calamari shared the streets with feline Cathar. Among such a diverse and interesting group, nobody paid any attention to a lone human and his astromech droid.