If you are a new or returning player, you may be asking, “What’s the best way to subscribe to SWTOR?” There are many different packages and ways to subscribe, and which one is best depends on how you want to play. This article will also go over ways to save money on a SWTOR subscription by purchasing Star Wars: The Old Republic subscription packs and special deals.

What comes with a subscription normally?

Sometimes SWTOR advertises special subscription packages that include the things like the 50 cartel coins or level 60 token… this is just a marketing tactic, since you get the expansions, one-time free character token and 500 cartel coins even if you purchase a normal subscription!

There are two types of subscriptions: reoccurring and non-reoccurring.

A reoccurring subscription will continue to charge you every month until you cancel it, which is great for players who play every month and don’t want to worry about having to deal with re-subscribing every month.

The second type of subscription is non-reoccurring, which means when your subscription time runs out, you will not be charged automatically, which is great for players who only want to subscribe for a set amount of time or who are just dipping their toes into the game and don’t want to worry about being billed when their game time runs out.

The official way to subscribe is on SWTOR.com, which offers 4 different subscription options.

This option is great for anyone is is worried about being charged monthly. Once your 60 days run out, you will simply become unsubscribed and won’t be charged again. However, if your goal is just to subscribe for one month, buy the 30-Days subscription and cancel it a few days later – you’ll be charge only $15, receive 30 days of subscription time, and  you won’t be charged again after you cancel your subscribtion.

This is the most common way to subscribe. If you don’t think you’ll be playing for a long period of time, this is the option you should choose, and cancel your subscription when you don’t want to play as a subscriber anymore.

This option is for the die-hard players who know they will be playing for 6 months in a row. You end up saving $12 compared to the normal subscription price. Simply cancel this subscription before your 6 months are up if you don’t want to pay for the next 6 months after your subscription time runs out. If you plan on playing this long, make sure to check out the Amazon package first for a great deal. 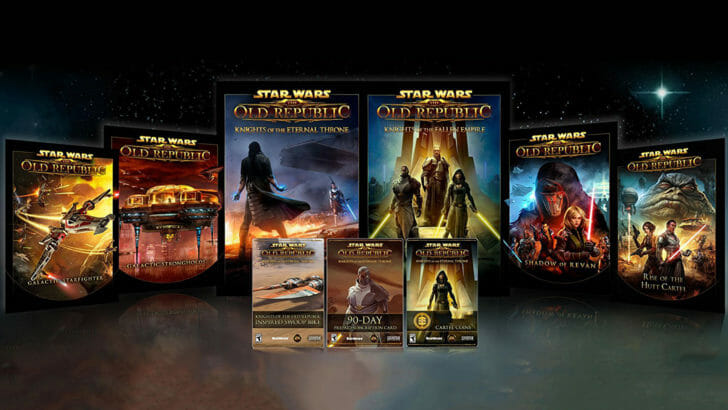 If you plan on playing 2 months in a row or more, or have already bought the Amazon Pack, the Origin Pack is the second best deal. Two months of subscription from SWTOR.com normally costs $29.99. On Origin it costs the same amount, but you also get 1,050 Cartel Coins for free and the Kakkran Daggerstar speeder for all your characters if you do not already have it.

You do not need to download Origin to buy this pack – you will receive a code you can input in to SWTOR.com to redeem your package. This package is great for anyone who only wants to play for 2 months instead of getting the 3 month Amazon package, or for someone who wants to get another good deal after purchasing the 3-month amazon package.

Important notes about the Origin Package:

IMPORTANT NOTE: This deal has been out of stock for a while now. However, it does sometimes come back in stock, so keep checking back periodically. If it’s not available, check the second best deal below.

This package changes names fairly often, and at the moment is called Star Wars: The Old Republic – Knights of the Eternal Throne – Amazon Premium Pack [Online Game Code] and is sold on Amazon.com. This package is the BEST DEAL available for subscribing for anyone who plans on playing for 3 months or more, and is highly recommended.

Normally subscribing for 3 months on SWTOR.com costs $41.97. On Amazon, this three-month package only costs $39.99, so you already save some money by purchasing the package. More importantly though, on top of three months for only $39.99, you also get 2,400 Cartel Coins – which would normally cost you $19.99 if you wanted to buy them separately. Since the Amazon package is less than subscribing normally, you pretty much get the Cartel Coins for free – which can be use to buy cosmetic armor, mounts or convenience unlocks. On top of all that you also get the Kakkran Daggerstar speeder for all your characters if you don’t already have it.

Important notes about the Amazon Package:

I looked but could not find this deal in Spain, Italy, or in Mexico. Brazil or Australia.
You may be able to buy the American version if you have a USA billing address available (the code is emailed to you though).