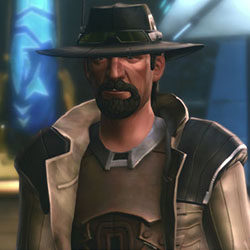 Recruitable By: All Characters

Requirements: Must complete the

Nico Okarr is a no-longer-retired companion who was originally available as a subscriber reward in 2015 for Knights of the Fallen Empire, but has returned as a permanent reward through Galactic Seasons.

How to Get Paxton:

Nico was first seen in SWTOR’s third trailer Return, where he is being escorted to a holding cell by Satele Shan and Jace Malcolm. He is the archetype of the smuggler – a gruff-looking, blaster-wielding rogue with a heart of gold.

PS he has a special little achievement when you go to mix him a drink! 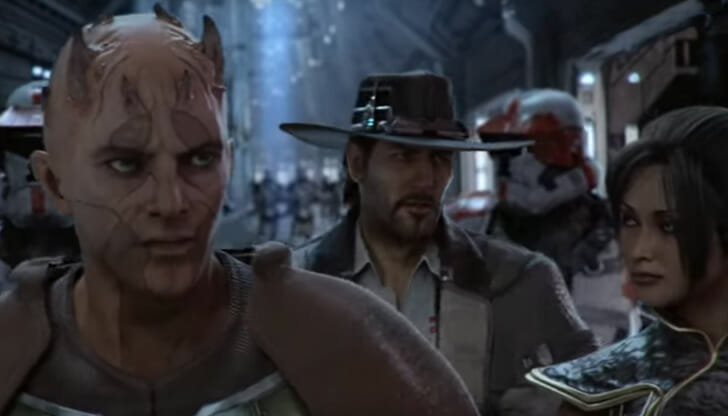 Nico Okarr: I swear, I had no idea what was in those crates, I’m innocent!

We know very little about Nico Okarr – his part in the trailer is to represent the Smuggler class that players could choose if they bought Star Wars: The Old Republic, much like Jace Malcolms represents the Trooper class. We know that he was caught smuggling Sith artifacts, powerful and priceless treasures that would likely wind up in the hands of the Empire. The Star Wars: The Old Republic Encyclopedia also states that he worked for the Hutt Cartel. 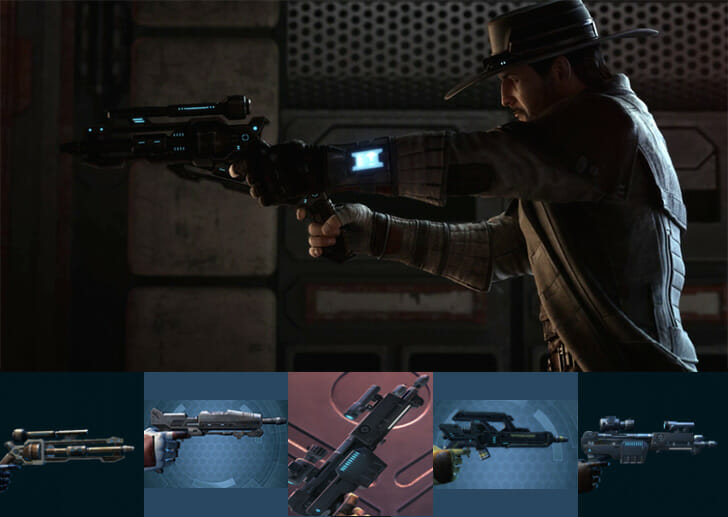 Niko Okarr and some current ingame blasters that are similar to his trailer pistols. Visit tor-fashion to view blaster pistols you can get ingame.

Knights of the Fallen Empire Expansion Images, including Nico as a companion, Nico’s Duster Coat, and Nico’s guns… which are different from the ones in the trailer and in the promo image.

He wears a cowboy hat and duster coat, and wields duel blaster pistols (like the Gunslinger Advanced Class). He a skilled marksman while working with Jace Malcolm, and when given sensible orders he follows them. His pistols in the trailer glow to match his bracers, and are different than the ones that are available as a subscription gift with KOTFE. His hat, coat, and bracers have hints of technology on them, so we can assume he’s got some tricks up his sleeve. 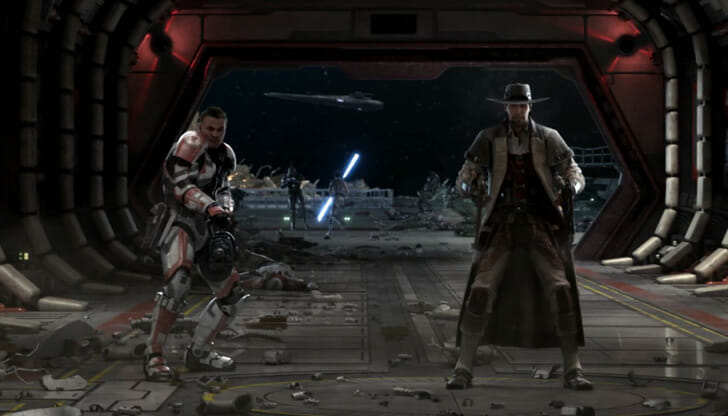 He also was able to get his ship out of a tight situation successfully – either by skill or by Smuggler’s Luck, we’ll never know for sure.

Jace Malcolm: Our shuttles can’t out run those fighters. 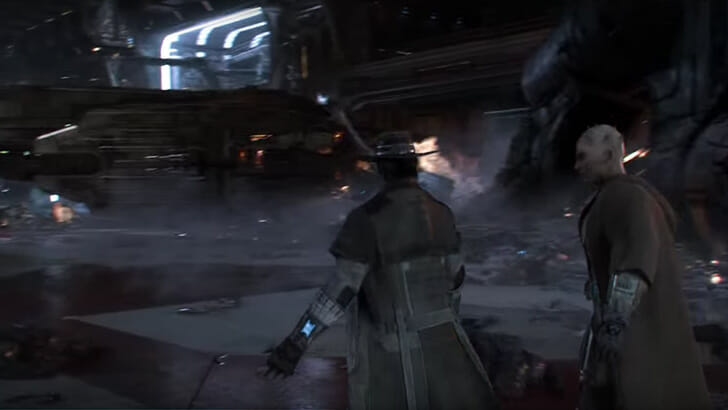 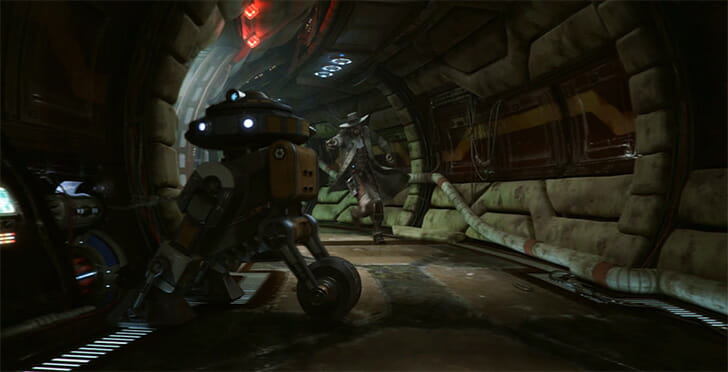 He was aided by the astromech T7-01, who was owned by the Jedi Master Gnost-Dural. T7-01 later becomes one of the Jedi Knight’s companions. 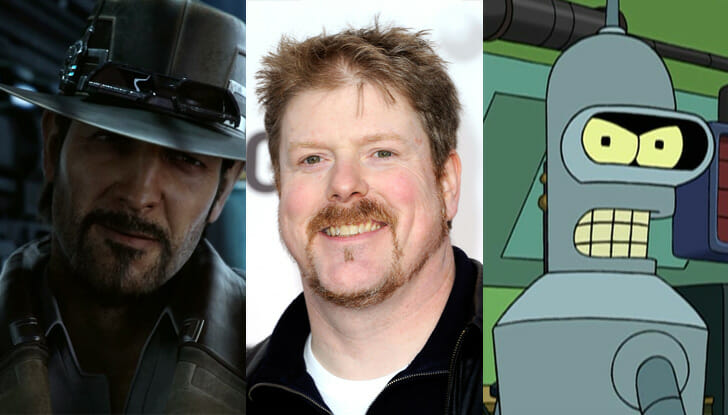 He was voiced by John DiMaggio, who is most well known for playing the voice of Bender on Futurama. He has also been the voice of General Grievous and Padawan Sha’A Gi in the Star Wars: Clone Wars series.

The short story Vacation was the first time Nico Okarr was mentioned outside of the trailer, with a surprising twist halfway through, and well worth the read.

Even by Outer Rim standards, the Sarlacc and Loaded cantina was considered the end of the line. Smoke sullied by the stench of bodily fluids and putrid food assaulted the nostrils… 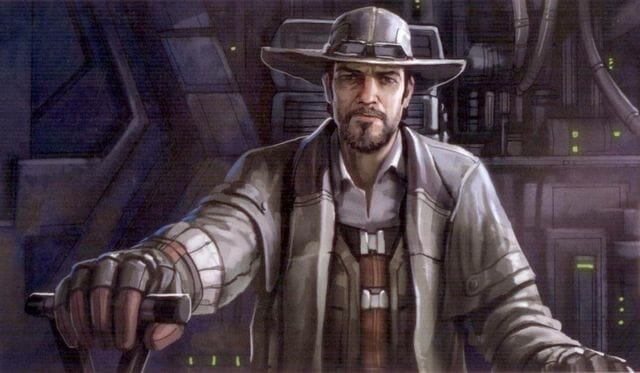 The story follows the search for Niko Okarr.

“Have you heard the name Nico Okarr before?”

The Snare’s hand jerked upward to grab the credit mid-toss. His fist lingered for a moment, gripping the coin before he slipped the currency into his overcoat pocket. Beneath the worn rim of his hat, the hunter let a smile slip. “Once or twice. What’s he to you?”

Seamus’ brow hardened. “A thief. One I’d like apprehended. I’m told you’re the best at finding people who don’t wish to be found.”

The Snare swung his feet off the table and leaned forward to take a swig from the bottle. “People, sure, but you’re looking for a legend. When it comes to Nico Okarr–hard to decipher what’s truth or fiction.”

“What he stole from my family was real enough.” Seamus dug his index finger into the table. Vhonu’s leg bounced.

Rubbing the stubble on his chin, the Snare pursed his lips. “It’s personal then.”

“It’s a job. That’s all you need to know,” Vhonu snapped.

Seamus shot Vhonu a look. Smarmy as the Snare might be, they needed him. For months they’d chased the ghost of Nico Okarr with no luck. Vhonu was a capable bodyguard, but they needed a tracker–and someone willing to keep the job hush-hush. “Okarr would be an old-timer now, but as you said, he’s a legend. Think of what this could mean for your reputation.”

Nico’s prowess in combat is also proven again in Vacation,

Nico moved quicker than a heartbeat. His knee kicked up the table to block Vhonu’s shot, while his left hand caught the blaster previously resting on the surface. He unholstered his other pistol with a spin, set it to stun, then fired exactly two shots over his makeshift barricade.

The shots were met with two thuds and a scurry of footsteps from the Sarlacc’s main bar. Nico counted to three before standing to assess the damage.

The last bit of interest info we get from Vacation is about Nico’s age.

Nico Okarr sighed and spun the now empty bottle on the table. “Know what gets old? People always judging me by my looks.”

What this means is anyone’s guess… he could have been frozen in carbonite for a time, gone through underworld surgery, or simply looks young for his age. 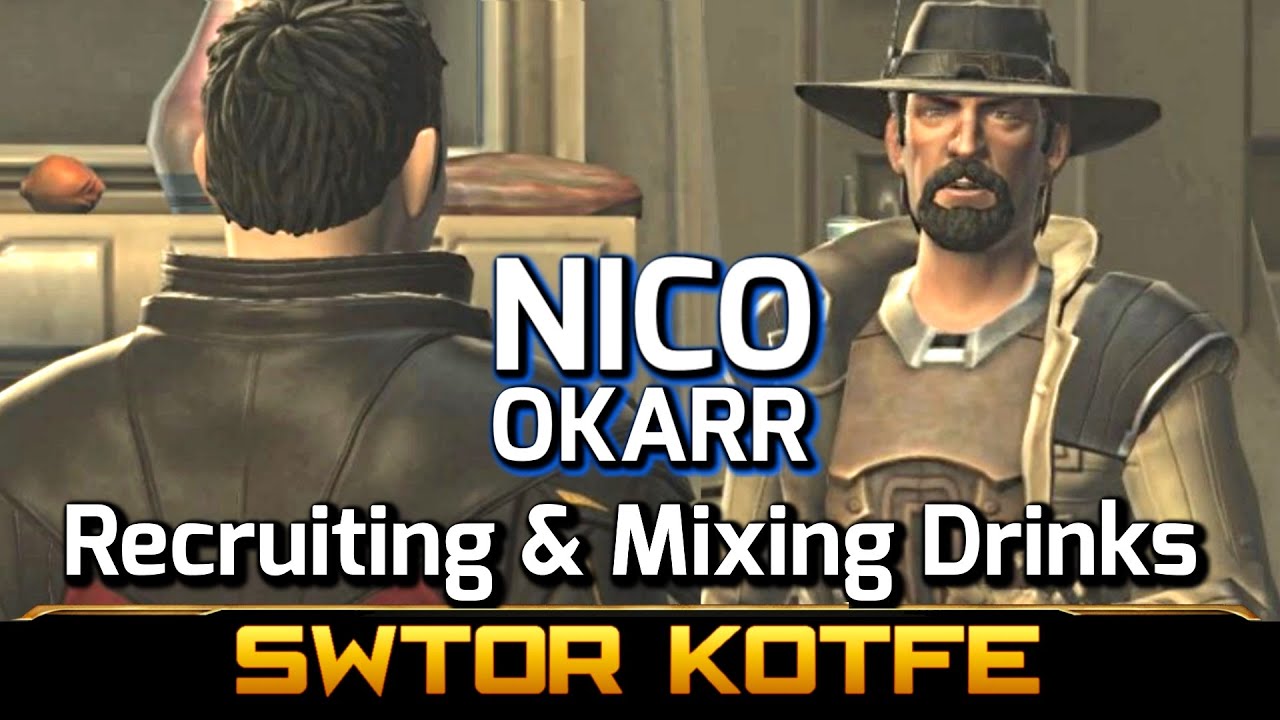