Which class should I play? What are classes, and advanced classes?

In SWTOR, you can successfully play all parts of the game with every class, as they are fairly well balanced. Your class will determine which story you’ll see, and what combat abilities you can use. Depending on how you like to play, it may be more important for you to choose which storyline you would like to see – OR to choose a class that fits your combat style, especially if you plan on doing PvP or Operations.

There are eight classes in the game, and each one has a distinct storyline that you can only experience on that class. 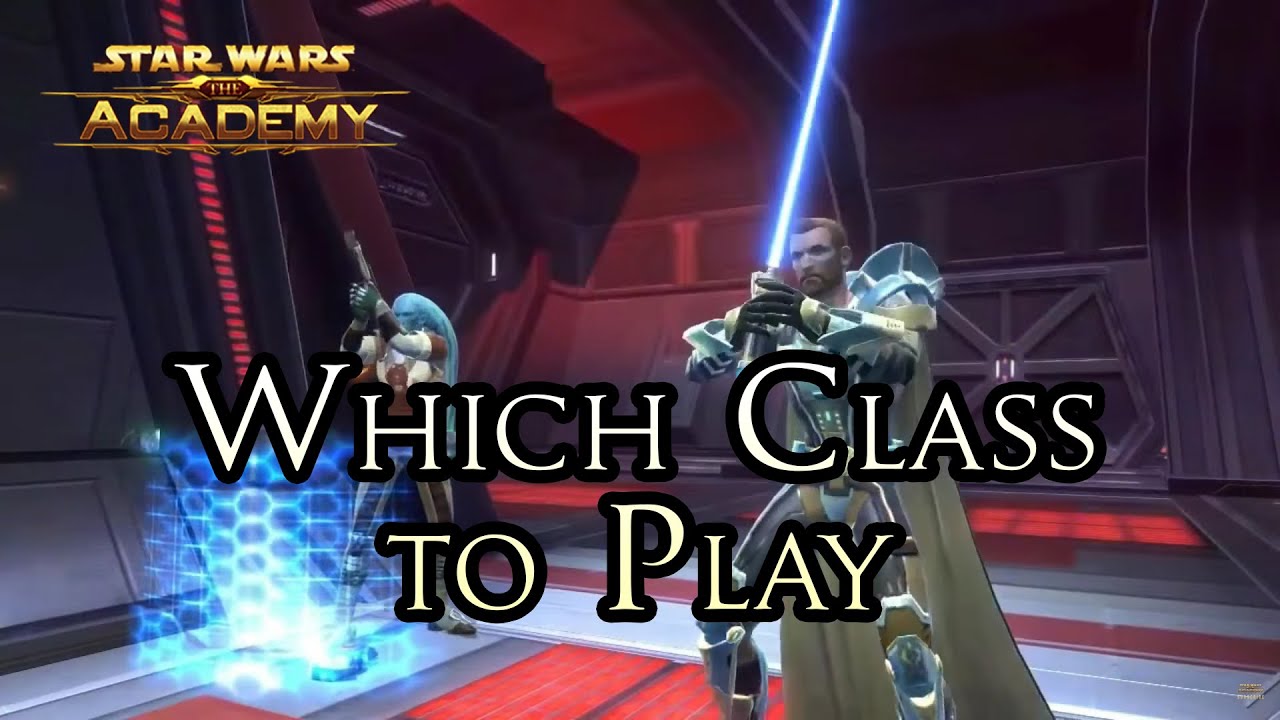 Each faction, Imperial and Republic, also has unique planetary storyline focused on the faction’s current troubles – so if you are more sympathetic to the light-sided underdog, make sure to choose the Republic. Conversely, if you’d like to move your way up in the powerful dark-sided empire, choose the Imperial side.

If you only have time to play one, I suggest the Imperial Agent on the Imperial side or the Jedi Knight on the Republic side. The Jedi Knight is also the ‘canon’ class shown in the later storyline’s trailers, when all the classes stories merge into one.

I highly recommend playing each class at least once if you have time. They are all part of a greater over-arching storyline that makes up the lore of SWTOR.

The Jedi Knight’s story is touted as “KOTOR III”, and is the most similar to the story shown in Knights of the Old Republic. It is a classic story of light vs dark, Jedi vs Sith.

The Imperial Agent’s story is often considered one of the best in the game, and is rumored to have been written first. The story also has drastically different endings depending on what choices you’ve made throughout the story, unlike some of the other classes which are more static.

The Jedi Consular’s class story is frequently derided as being the most boring of the class stories, as it focuses on healing, study and diplomacy rather than adventure and intrigue like the other stories. The Consular’s story is that of a more average Jedi, rather than one who saves the world with a sweep of their saber.

The Sith Warrior’s class story is a very “Star Wars” story, much like the Jedi Knight. This story focuses on the history of the Sith, and the struggle between the dark and the light side of the Force.

The Smuggler’s class story is exactly what you’d expect it to be – a high-flying adventure filled with lying, stealing, smuggling and gambling with hearts and credits. This class is great if you’ve ever wanted to play as a smooth-talking Han Solo.

The Sith Inquisitor’s class story focuses on the mysteries of the Force and Sith Alchemy. You will also struggle with members of the Dark Council as they try and strike you down as you grow in power.

The Trooper’s class story is about being a part of the Republic military, and dealing with the treachery that has been sown in its ranks. As you deal with betrayal, you’ll also have to help save planets that have been overrun by the Empire.

The Bounty Hunter’s class story sends you on The Great Hunt, a competition to name the greatest bounty hunter in the galaxy. Not only will you have to find your targets, you’ll also have to deal with rival hunters.

How to Choose a Class

When choosing a class, you will also want to consider how the class will play in combat if you plan on continuing to play your character after you have completed the storyline.

There are three classes that can be tanks, three that can be healers, and all eight can be DPS – so if you want to be a tank or healer, you’ll need to make sure to choose a class that has that option available.

Once you choose a class, you will later be able to choose an Advanced Class. Your Advanced Class is a permanent choice, and will lock you into playing certain roles and using certain abilities.

If you plan on doing group content, I suggest choosing a ranged class. Ranged classes are highly favored in almost every fight. You will also have a better view of the entire fight. I also recommend choosing an Advanced class that can play multiple roles – that way, if you wind up in a group that is the wrong composition, you can swap yours.

Although there are eight classes, the Imperial Classes and Republic classes are mirrors of each. That means although they have different storylines, their combat roles and abilities are the same, except for the animations.

The Trooper can become a Commando or Vanguard. Commandos can be ranged DPS who use a heavy blaster cannon, and a variety of speciality ammo to gun down their enemies. Commandos can also be healers that shoot kolto from their gun, and act as a field medic. Vanguards can be close-range DPS that attack with knives or fire, and have an ability that can get them close to the enemy – fast. Vanguards can also become tanks, who defend themselves with technology like personal shields and adrenaline stims.

The Smuggler can become a Gunslinger or Scoundrel. Gunslingers are long-range DPS that can hunker down and take cover while they fight. Scoundrels can be more close-ranged down-and-dirty fighters with shotguns, or become healers that practice in underworld medicine. Scoundrels also own a stealth generator, which can allow them to avoid combat when they need to slip away.

The Imperial Agent is the mirror of the Smuggler, and can become a Sniper or an Operative. Snipers can wield the elusive long-range sniper rifle, and can also deploy various droids and poisons while they take cover. Operatives can attack at closer range with knives, or become healers that are supported with the best medicine Imperial research can provide. Operatives are supplied a stelath generator by Imperial Intelligence, and can stay in stealth for long periods of time if undetected.

The Jedi Knight can become a Sentinal or Guardian. Sentinals focus purely on up-close damage, and wields two lightsabers. They also have a temporary force-stealth they can use to confuse and dishearten their enemies. Guardians use a single lightsaber, and can become either champions of the force as a DPS or tank.

The Sith Warrior is the mirror of the Jedi Knight, and can become a Marauder or Juggernaut. The Marauder wields dual-lightsabers, and draws on the dark side of hte force to intimidate their enemies at close-range. Juggernauts are combative dark-side wielders that can become DPS or tanks.

The Jedi Consular can become a Sage or a Shadow. Sages stay carefully away from the fight at long-range, as either force-wielding DPS or healers. Shadows can slip away from fights using their Force Stealth, and when they re-appear they can act as close-range DPS or tanks that can protect themselves with the Force.

The Sith Inquisitor is the mirror of the Jedi Consular, and can become a Sorcerer or an Assassin. Sorcs allow others to move in close, while they stay behind using their arcane arts to do damage with the dark side of the Force. Assassins can become dual-wielding close-range DPS, or tanks that protect themselves with Sith Runes and Force lightning.

Which Class is the Best?

There is not definitive ‘best class’ – for combat, they’re fairly well balanced, and the qualityo f the stories are up to opinion. Choose a class that you think sounds like it has an enjoyable storyline, and a combat style and advance class you will like to play on.