Discord has become the de-facto way for Star Wars: The Old Republic players to communicate out-of-game for both text chat and voice chat, and players who are interested in playing any type of group content or want to meet other SWTOR players will want to take advantage of a free Discord account. Players can use Discord to send text-based messages to other players or groups, to listen in to a group leader’s instructions for flashpoints, operations or pvp, or to join in with full voice chat with a microphone. 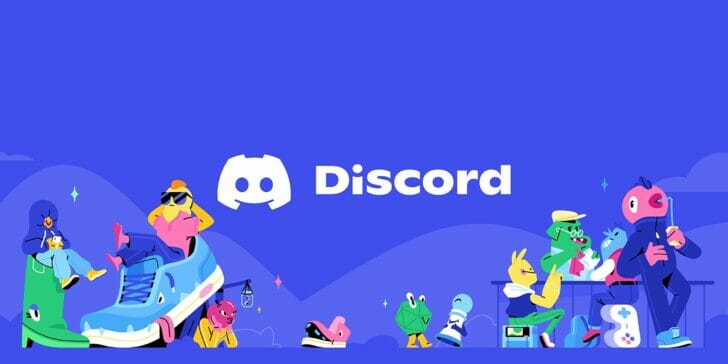 To create a free Discord account, go to discord.com and choose “Open Discord in the Browser” to get started quickly.

It will then ask you to choose a username. If you aren’t sure what to pick, choose your character name from in-game.  DO! NOT! USE! YOUR! REAL! NAME!

Most players will be able to immediately start using Discord after this step!

Joining text chat in Discord is very easy. You first need to find a server to join – most servers are joined by clicking a link. You can join your first Discord server by clicking this link, it will lead you to the largest SWTOR server that is open to everyone: discord.gg/swtor

Once you join a channel, there will be different channels on the left hand side of the screen if you are on your computer. These chat channels each start with a # hashtag symbol. If you aren’t sure where to start, most servers have a #general channel where you can go say hi.

Once you have picked a channel, you can type your message to everyone in that channel or server at the bottom of the page. You can also see players posting messages in real-time in the center of the screen. 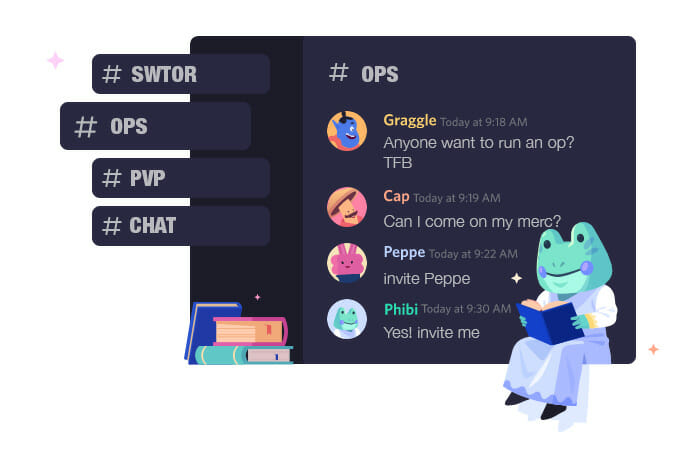 Some Discord Servers will hide certain channels until you’ve completed certain steps, for example setting your server roles to say that you are on the Satele Shan server, or that you are interested in Operations. Look for a chat channel that says “roles” or something similar to enable these additional channels, especially if you are interested in operations or other group content.

While many players are very socially active through the text chat, players often don’t use the voice chat channels except when there is a specific event running.

If you join an operation, or other group activity, the other players in the group may invite you to their discord server so you can at least hear them over voice chat, even if you don’t have a microphone. Giving instructions for operations or player-vs-player content can be a lot easier and faster for many group leaders, and group leaders appreciate when players in their group are willing to hop into the voice chat even if they’re just listening in. To join, go to the link they send you on the internet. You will then need to join their voice channel, voice channels are labelled with a symbol of a megaphone before them, and if you double-click the channel you should be able to hear anyone who is talking in there. If someone is talking, their portrait in Discord will show a green light around it, and their names will be listed under the channel name. 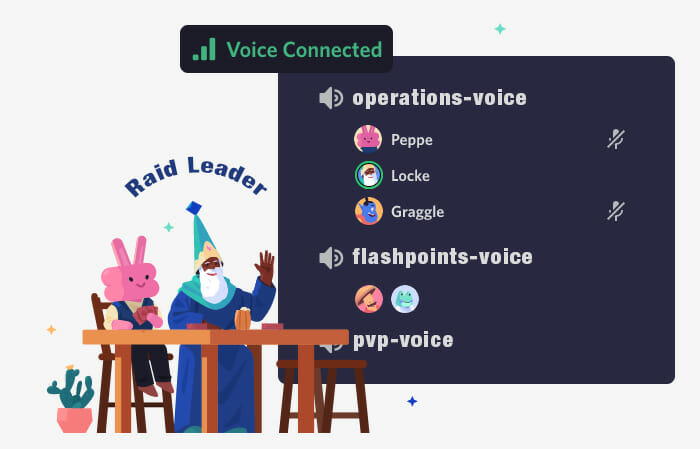 Speaking in Discord is a little trickier. Many players who do not have a microphone will download the Discord app to their phone, and communicate through there while actually playing the game on their computer, this is also a great option for players with slower computers.

Some servers allow you to use Discord’s default speech settings, which will share any sounds you make with the group, for example, if you sneeze or your dog barks, everyone will hear it. Other groups require “Push-to-Talk”, which is a setting that makes it so your voice is only heard by the group when you are deliberately holding down a button on your keyboard. For example, if you want to speak, you may need to hold down the shift button on your keyboard. To set your Push-To-Talk button, click the icon of a cog beside your picture and username on the bottom left of discord. You can then choose “Voice & Video” from the settings list on the left, and the Push-To-Talk settings will be located there. If you have a lot of background noise – for example you like to play with speakers on, or have noisy family or a TV on in the background, it’s generally considered rude to not have push-to-talk on, forcing your entire voice chat group to listen in. Otherwise, larger groups will often require push to talk, just to limit the amount of noise incoming from 16 different players microphones!

If you are finding you are having troubles trying to speak with people in Discord while the game is open and Push-to-Talk is active, you will want to download the Discord program to your computer instead of using the internet version. You will also then need to close the program, and then re-open it by RIGHT CLICKING the discord icon on your computer, and choose RUN AS ADMINISTRATOR. Otherwise, you will only be heard by your group when you have Discord visible on your screen and selected, which isn’t useful if you’re playing ingame.

You may also want to pick a picture to represent yourself, and you can even assign yourself a nickname.

To change your picture, click the symbol of the cog beside your name on the bottom left, and choose “My Account” from the settings list. There you will be able to upload an image – Old republic players often pick a screenshot of their character, or another gaming-related image they found online. 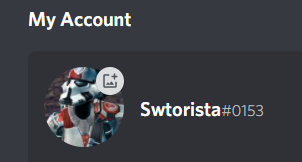 Once you’ve joined a server, you can also give yourself a nickname just for that server. This can be useful if you are playing with other players, for example if you join an operations group, you can set your nickname to include your character name in-game – so I might set my nickname to be “Swtorista / Scya” so people can easily tell who I am. To set your nickname, first click the server you want to update your nickname for on the left of the screen. Then, you can click the server name and its drop-down arrow on the top left of the screen

This should open a menu where you can change your nick-name for that server! 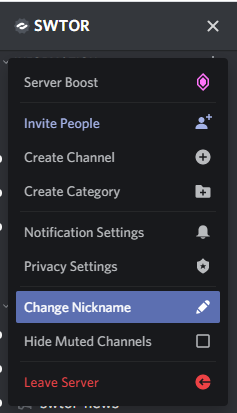 Here, you can find a thriving community where players and fans alike can come together to discuss anything and everything Star Wars: The Old Republic. We do our best to keep this community clean, so please read the information below so you can become acquainted with this server and its rules.

For players looking to connect with other players on the Satele Shan server, including operations and other activities.

For players who enjoy achievement hunting on the Satele Shan server and are interested in grouping up for group-focused achievements.

Inconsistent (a large guild, but anyone is welcome for raiding)

For players looking to connect with other players interestedin Operations on the Star Forge server.

Lit (a large guild, but anyone is welcome for raiding)

For players looking to connect with other players on the Darth Malgus server, including operations and other activities.

Do you have an interest in completing your legacy? Then come and join us on AH-TH, the Achievement hunting Discord for Tulak Hord. (little warning the server’s main language is German.)

Swtorista’s Discord Where? My private discord is accessible through pledging at swtorista.com/support . If you are interested in a large fantastic free server, I recommend discord.gg/swtor as your first pick. If you are a Swtorista Twitch subscriber, go into your Discord settings, User Settings > Connections > Twitch and sync Twitch account. If you have a Swtorista Youtube Membership, go into your Discord settings, User Settings > Connections > Youtube and sync Youtube account. If you are supporting through Swtorista Patreon, you need to go to your Patreon.com settings and enter your Discord username in there. If you are having issues feel free to message me! – Swtorista