Do you like collecting semi-retired armor sets and hunting down rare titles? At the launch of 7.0, Star Wars: The Old Republic added 68 titles in the game, with each title tied to collecting an armor set that was relevant during the previous expansion. You can till get the titles now, but it’s a lot harder! While many of these armor sets were directly purchasable in the previous expansion, now they set pieces can only be obtained from a special vendor named Kai Zykken. 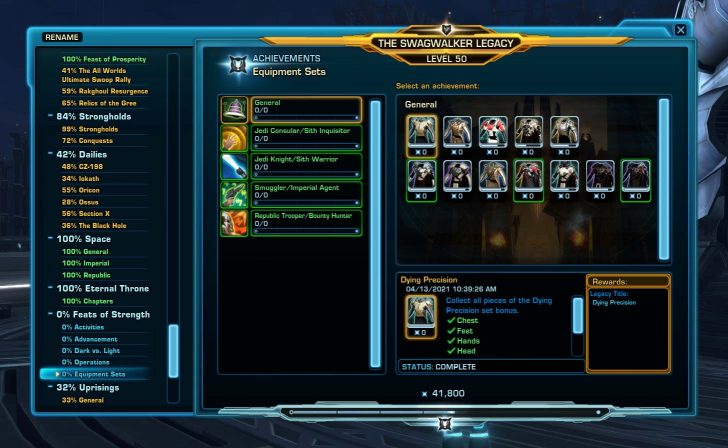 To see your progress, open your achievements and look under Feats of Strength > Equipment Sets. For every achievement you complete in this section, you’ll get a Legacy title you can use on all your characters on your server. To complete each achievement, you’ll need to obtain a full set of each 7-piece armor set attached to that achievement.

These achievements were previously called the “Spoils of War” achievements, but were moved to the “Feats of Strength” category.

Obtaining the sets is a lot harder. In the previous expansion, you could often gets sets from specific types of content, or buy specific pieces directly from vendors. Now all the sets are tied to a “random” box sold by the Kai Zykken Vendor, located in the Supplies section of the Fleet.

The item from the vendor is called an Unidentified Onslaught Set Bonus Gear and costs 1,000 Tech Fragments and 500,000 Credits. It contains a random piece of level-75 Set Bonus gear, something that is no longer useful for gearing up once you reach level 80. 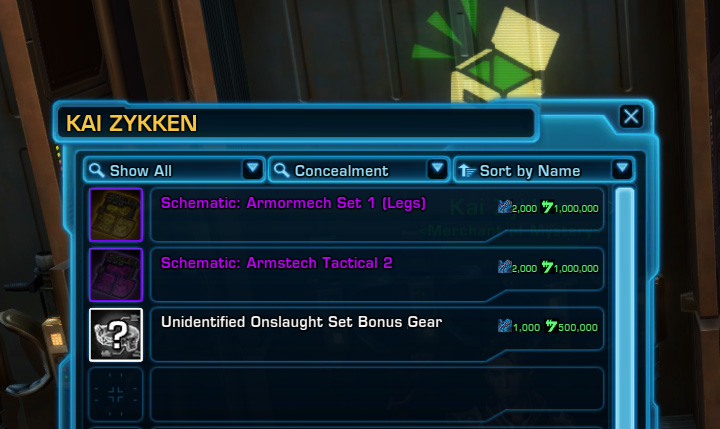 The gear box randomly drops one of the 476 pieces of level-75 Set Bonus gear, but it does have some restrictions and is supposed to have some anti-duplicate measures. 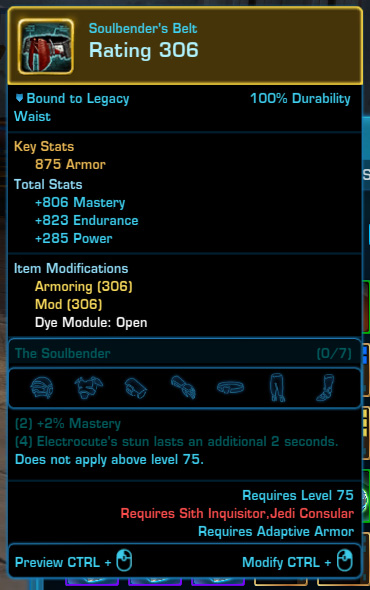 It does get tricky though, as some pieces say they are tied to a specific Class, for example the “Jedi Knight / Sith Warrior”… but your class story is no longer tied to combat, so I assume that would translate in 7.0 to mean a discipline that used to be tied to those classes. NOTE, I HAVE NOT TESTED THIS. YOU MAY NEED A CHARACTER THAT HAS THE RIGHT CLASS STORY.

If a piece is specific to a certain Combat Style, for example “Commando” you must currently be in the Commando discipline to get it to drop. Double-check your Combat Style before opening boxes.

Kai Zykken does have a degree of duplicate protection.

Here’s a quote from one player named Screaming_Ziva who did some testing on this great thread, “From what I can tell, it’s characters that are bugged when you cannot gamble any more sets that you need. Now I just need to start transferring all of my Juggs over to the PTS to see which of those isn’t bugged so I can get the last two pieces of the Dashing Blademaster set that I need.” Here is their findings:

“After all of my PTS testing but I was finally able to finish all the sets on the live servers. Some things I’ve noticed:

These are just my observations so hopefully they will help some people.”

Kai Zykken Giving Nothing: There was a bug fixed in 7.0.2 where players would buy a box and Kai Zykken gives nothing at all. This was fixed.

Old Bug pre-7.0 sets: There is an older bug related to Spoils of War achievements for both tacticals and armor sets – when it first came out, there were some bugs, and some of the items may not have activated the achievements. For example, a lot of tacticsl were not triggering the achievements if you bought them from a vendor. To fix this, take your armor or tactical, and simply mail it to your Imperial character. Once you mail it and pick it up into your inventory, it should properly trigger the achievement! Hurray! I tested this out and it worked for me!