With Togruta coming out in 3.3, many players have been asking, “What class should I make my Togruta?” Togruta look similar to Twi’lek in that they have headtails and unique markings, but their lore is unique and their appearance in the game as named characters scarcer.

When it comes to choosing your class, don’t restrict yourself to what you think a Togruta has to be. The Expanded Universe of Star Wars is filled with stories about people breaking the mold and overcoming stereotypes and expectations. There’s even a story of a Hutt becoming a Jedi! In the Imperial stories, if you are an alien, you are constantly put down by your superiors… until you become one of the most influential people in the galaxy. In the Republic stories, we often see aliens of all types in positions of power. Many people will suggest that the only class Togruta should play are the ones they have seen them play in mainstream Canon media – but we are playing SWTOR, where the adventure is truly, and uniquely, yours to choose.

These suggestions and ideas are based around the Togruta Expanded Universe lore and Wikipedia. 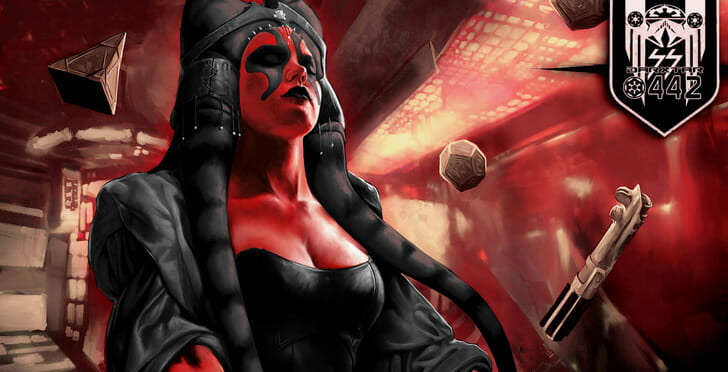 The Sith Inquisitor would be the ultimate perversion of all lore created about the Togruta, from their sense of unity with eachother and the land, to their penchant for leaving behind the incompetent. The Inquisitor is considered a failure when they first start the game – they are a slave, they are weak, and if you play them as an alien they are considered sub-human scum. Without catching the interest of a prominent figure (who himself seems very unfit when you meet him) you might never have made it out of the academy. The Inquisitor works alone, and often treats others as beneath them, or as temporary playthings or pawns in the game of power. They grow their power purely through the dark side of the Force, which is fueled by raw emotions like anger, hate and greed. Playing a Sith Inquisitor as a Togruta would be turning your back on everything that makes you Togrutan, in exchange for great power. 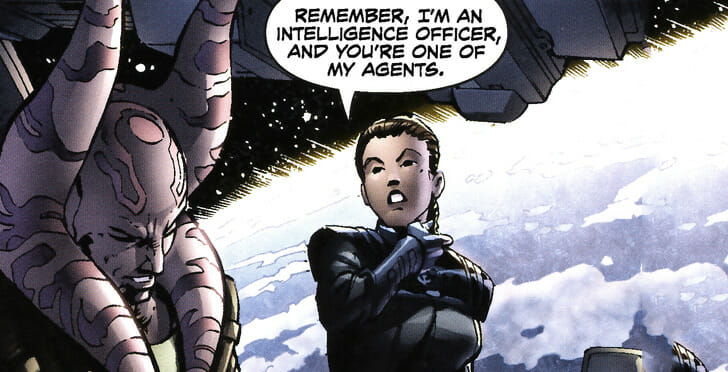 The Agent must be cunning, quick, agile and sharp. They are constantly balanced on a tightrope of political intrigue and one false step could send them spiraling into disfavor with the Empire. However the Agent must often work alone, surrounding themselves with lies to keep their cover, and Togruta are known for having “a strong sense of unity and togetherness”. Being an Agent will either be a large trial for your Togruta to overcome, or it will be a way for them to easily become unified with any group at any time. The agent shows off their ability to blend in with any group early in their storyline, from their skill at throwing their voice to easily lying about their heritage. On their home planet, Togrutans’ stripes and coloration acted as a form of camouflage in the re-and-white turu-grass… and if an agent knows how to do anything, it’s blend in. 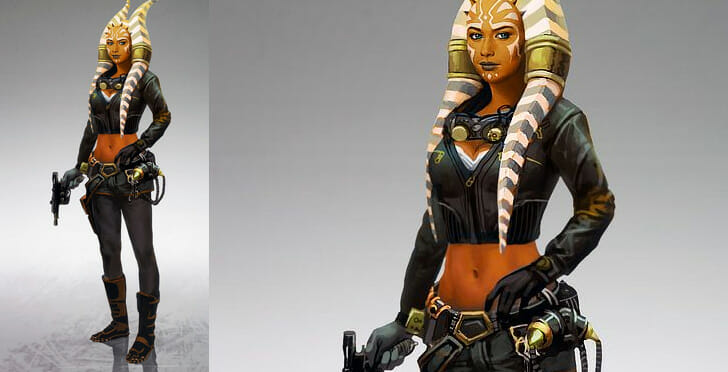 In the smuggler story, a special quality is often referenced called “smuggler’s luck”… and with their unique “montrals” (hollow horns on the top of their head), Togruta might be a great choice for a smuggler. They would have better perception than most species due to their montrals, which give them the ability to sense the “proximity and movement of physical objects around them”. Think about how a smuggler moves – often not with calculation, but with instinct, a lucky duck at just the right time allowing them to escape decapitation or dodging out of the way at just the right time. A Togruta’s heightened senses might just give them the edge they need to survive in the blaster-fire situations the smuggler often gets themselves in to. Togruta also “believed that the land was spiritually connected to them, and wearing shoes cut themselves from a bond with the land” – although the smuggler is probably the class farthest from their spirituality, you could perhaps expand this idea to being connected to their ship. A smuggler’s ship is considered an extension of themselves – their home, their pride, their joy. Ships in fiction are occasionaly painted as being “alive” by their owners and caretakers, to the point where they are given human names and genders. There’s no reason your Togruta can’t be connected to the only home they’ve ever known – whether it’s the decks of their Freighter, or the grimy floors of Nar Shaddaa. 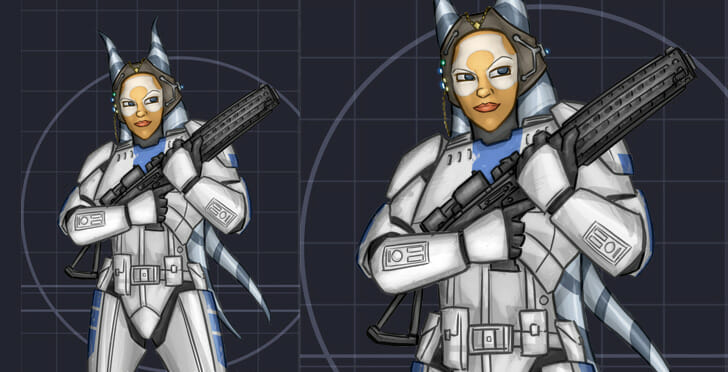 “Togrutas are among the Republic’s most loyal and dependable citizens.” Togruta have a high sense of unity, and so does the Republic. Working together is natural for them, especially when it comes to taking down a strong enemy. On their home planet, they worked together to take a stand against the akul, the only creature native to their home planet that Togrutans feared. When travelling to Hoth, you can see male Togrutan Troopers shivering in the cold, and you interact with them on Coruscant as well. 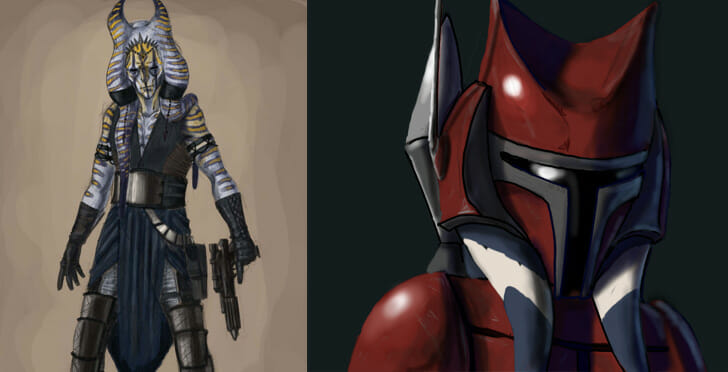 A Togruta would make a great bounty hunter – because they are carnivorous, they are required to track down their prey on their homeworld of Shili. They also habitually keep their shoes off to better connect with the earth, and make a bond with the land – that connection could help a Togrutan Bounty Hunter track down their prey. You could be a Bounty Hunter that seeks down lost bounties with your connection to the land… or use your primal instincts to hunt down your prey. Keep in mind if you do not choose a chest armor that has a a jetpack built into the back, your jetpack abilities will come out of your feet.. you might not want to combine this with the barefoot lore. 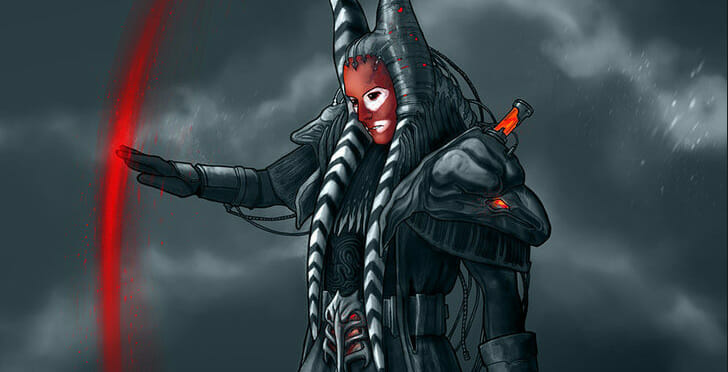 The Sith Warrior actually fits very well with Togruta lore if you are willing to see beyond the sweet Jedi Padawan Asohka Tano and the few other Togrutans you encounter in canon lore. In their expanded lore, many Togrutans hail from their home planet of Shili, where they relied on each other to protect themselves against massive monsters. They learned to fight, and to hunt as they are Carnivorous, and have sharp canine teeth. You could play your Togrutan as a very strong, ruthless Sith that would go to any length to protect what they care about… or a murderous, carnivorous creature that lives for the thrill of the kill. “Togruta were also known for their belief that those who could not keep up should be left to fend for themselves, because that is nature’s way.” This view meshes very well with the Sith’s rules of survival, where they pit younglings against eachother in the Sith academy, from which very few survive. They also showed off their skill and maturity by wearing the pelts of the creatures they defeated – so a Togruta with skulls on their belt would not go amiss. There is also many different types of armor made of fur and hide available in the game you could wear, including the Hoth Social Armor. 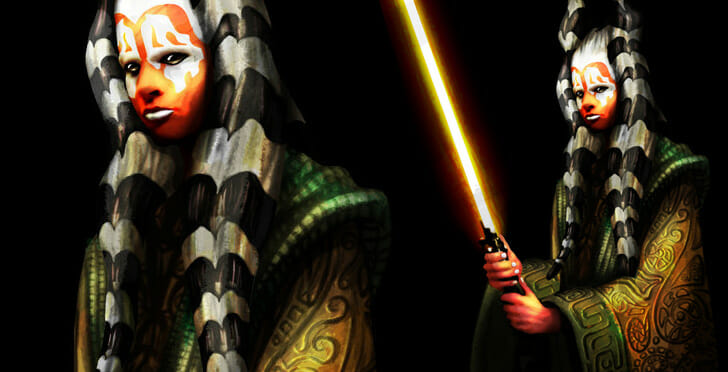 The Jedi Knight is the role most casual Star Wars fans will have seen a Togruta occupy. In the animated movie The Clone Wars and some episodes of the TV series that followed, a youngling Togruta named Ahsoka Tano is featured as a spunky, quick-thinking, determined fighter who has become Jedi Knight Anakin Skywalker’s apprentice. In the series, she can often be seen using her skill with a lightsaber to slice enemies, and her physical strength amplified with the Force to protect and defend herself. There are also very few well-known Togrutan characters in SWTOR, and the most well-known is the Jedi Council Member Bella Kiwiiks, who served as a Jedi Knight during the Galactic War before the Sacking of Coruscant. 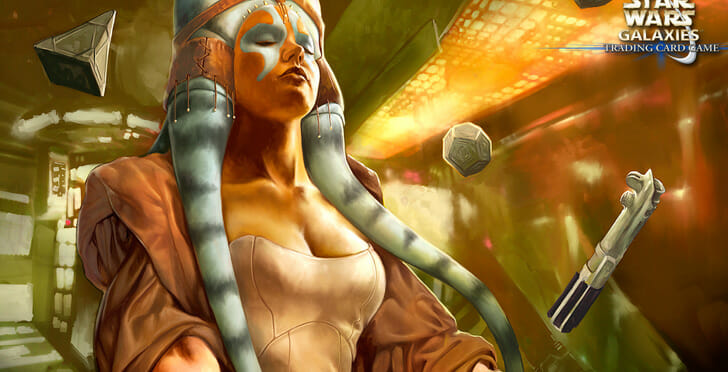 Before Togruta were released, the Jedi Consular was the class most people said they would roll, and the class that others suggested people to play. This is likely because the Togrutans first appearance was in Star Wars II: Attack of the Clones. The first Togruta shown was Shaak-Ti, a female Togruta with red skin and white montrals. Although she is not stated as being a Jedi Consular, her long, ornate robes would be difficult to fight in with the fierce style of the Jedi Knight. In their lore, Togrutans’ sense of unity to the land ties in well with the Consular’s abilities, including picking up and throwing chunks of the earth. The Consular is also considered the more ‘spiritual’ side of being a Jedi, where the Knight focuses on their physical combat skills.

In the end, it’s important to play what makes you happy! And if you are roleplaying, keep in mind your story does not have to match up with the class you have chosen. If you want to roleplay as a medical scientist like Doctor Synoda on Taris, just unequip your lightsaber and let your imagination fly.