The Ancient Gree Relays quest is a once-per-character quest that you can only complete during the limited-time Relics of the Gree event in Star Wars: The Old Republic. If you don’t know much about the event, you’ll want to check out my Gree Event Guide first. 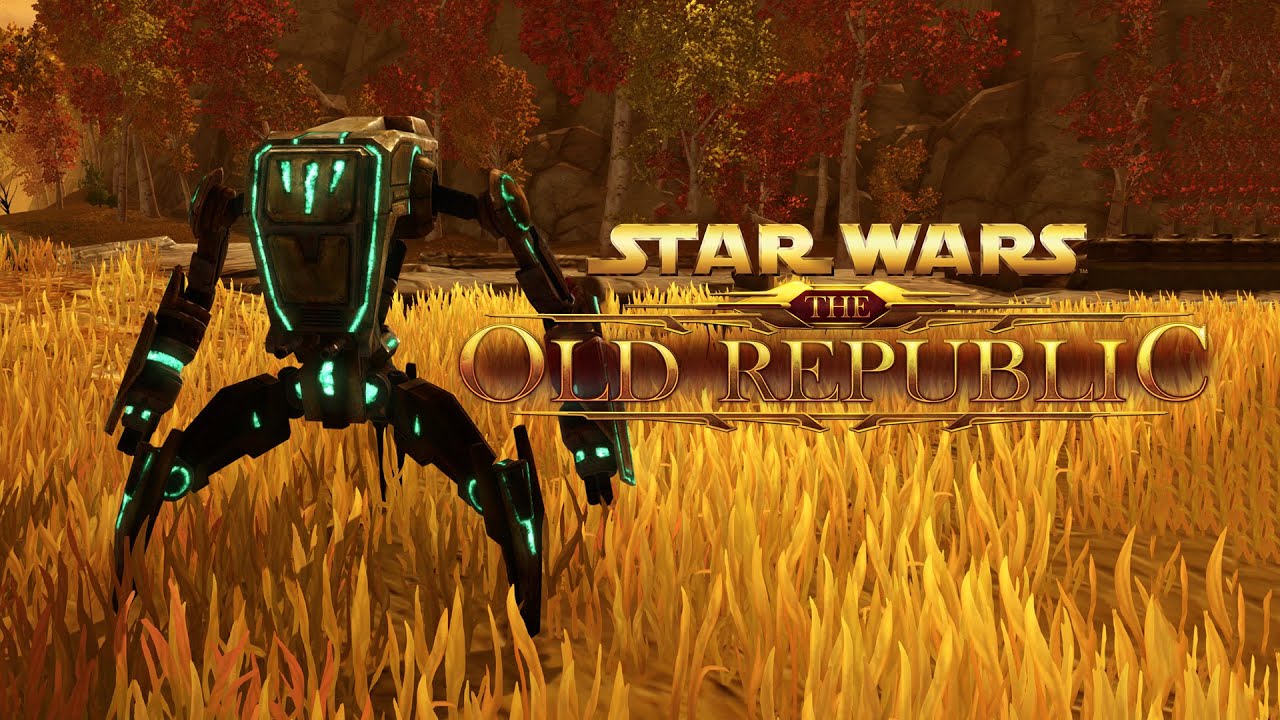 Completing this quest will get you a large amount of Gree Reputation points, two Gray Helix Components which are a type of currency you can spend on rewards for the Gree Event, and a special droid pet called the L1-L Scout. 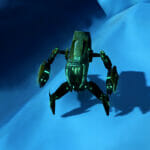 As you do Gree Event missions, you’ll level up your reputation rank. Once you reach Newcomer rank with the Gree, you’ll be able to buy a special item from a Gree vendor called “Authorization: Gray Secant” which you can then right click in your inventory once you’ve left the vendor.

This will allow you to enter the Gray Secant map in the far north on Ilum,

If you’re trying to get to the Gray Secant from the platform the event starts on the, the easiest way is to take the nearby teleporter to the “Northern Terminus” which will put you just a little south of the entrance. Make sure to go in from the left Imperial side, or the right Republic side, otherwise the floating partitioner droids will attack you. 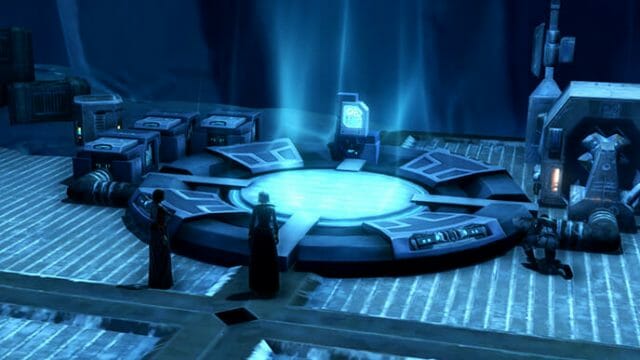 Inside the Gray Secant, about halfway in, you’ll find a quest-giver for the one-time quest per character called the “Ancient Gree Relays” that will actually send you around the galaxy. 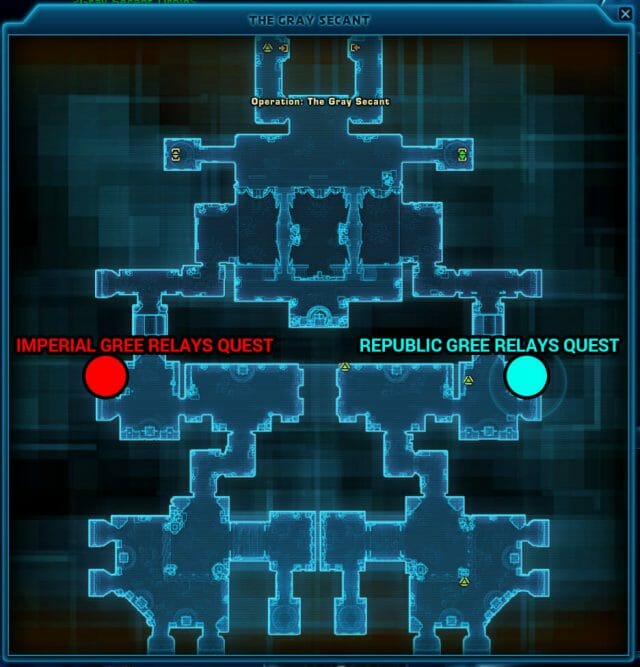 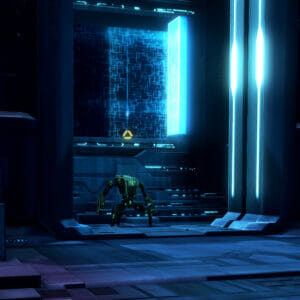 You encountered an ancient Gree droid on the Gray Secant designated Kanarosiku-K. Kanarosiku-K has asked you to recover data from Gray Secant’s observation units, ancient relay droids which have been lost on the remote reaches of planets across the galaxy. These droids have not submitted data on the expected schedule. Recover the data from each droid and return to Kanarosiku-K.

Tip 1: Use the Heroic Quick Travel from your solo activities tab (“3 little people near your minimap”) to quickly get to all the planets for this quest to save time and skip the space stations!

Tip 2: These droids are not hidden – you can follow the quest markers to find them once you are on the planet.

Tip 3: Once you reach the location, there will likely be a group of Gree Relay Defender droid enemies around the Relay Droid you need to talk to. These droids are really strong – they seem to be meant to be fought with a group, though skilled players should be able to take them down solo. However, I did find a good trick – if you run up to the droid in the middle, and the defender droids kill you, revive yourself in the same location and then quickly click the quest droid while you are still stealthed from reviving, and it will start the quest. You can then use any travel method (ex go to your stronghold or quicktravel) to escape!

Thank you to player Cragord who took screenshots of all the locations you can find the relay droids!

Locate Takobanulu-K on Coruscant (Republic only)

Takobanulu-K is located on the Old Galactic Market map, near the giant world boss droid, up on a high platform. 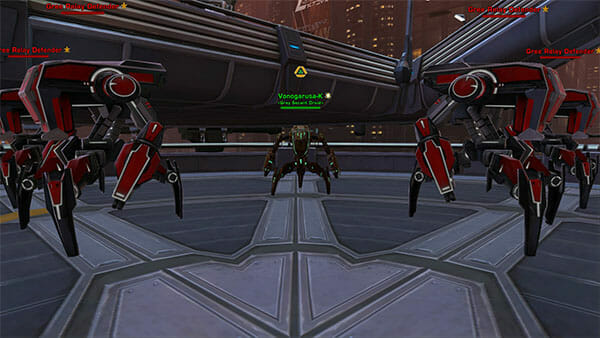 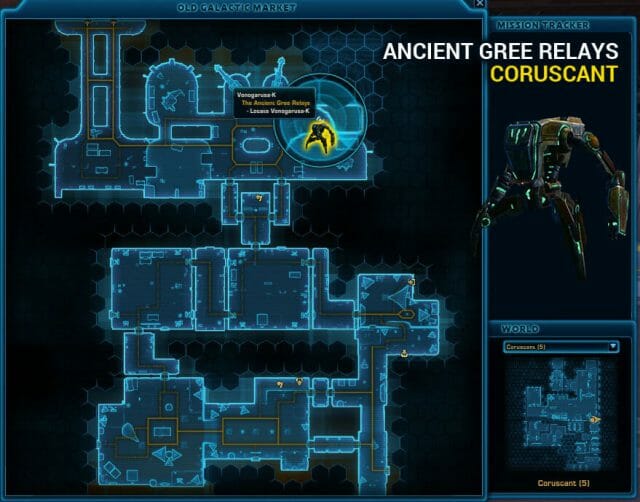 Vonogarusa-K is located in the jungles of Dromund Kaas, south west of Kaas City. 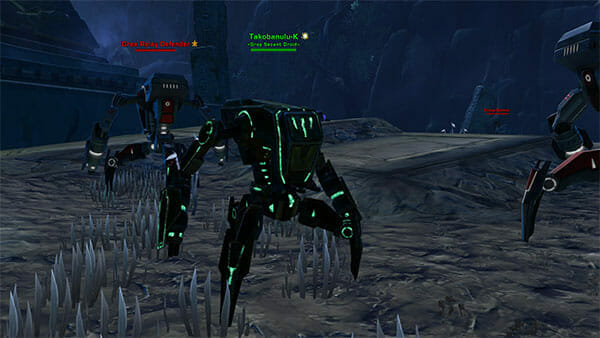 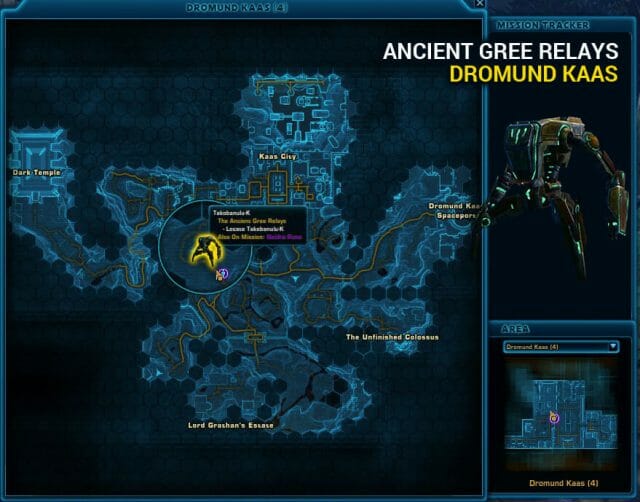 Pobarazotu-K is located on the north east edge of the Dune Sea map (Republic players are close to it from Outpost Thorazen, Imperial players need to run far north from Zaroshe Outpost.) 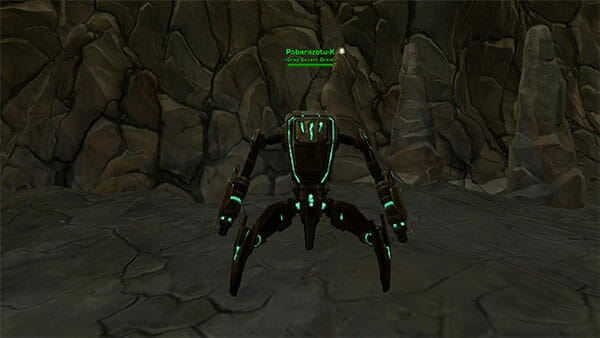 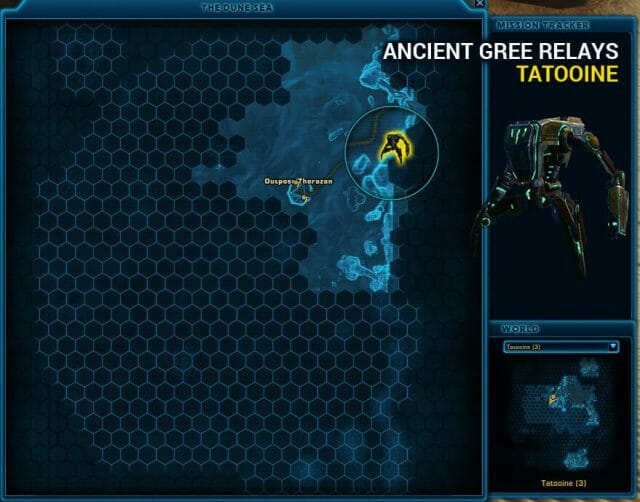 Birabosola-K is located in a little mountain patch on the Juran Mountains map, to the North. 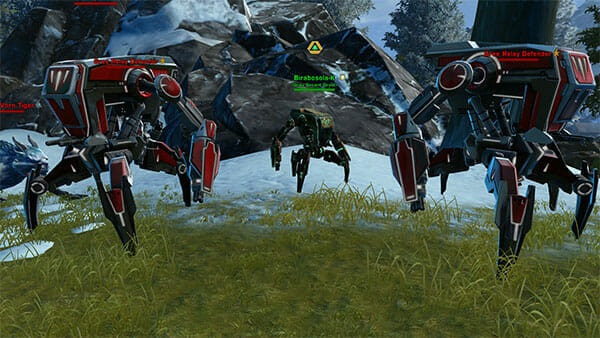 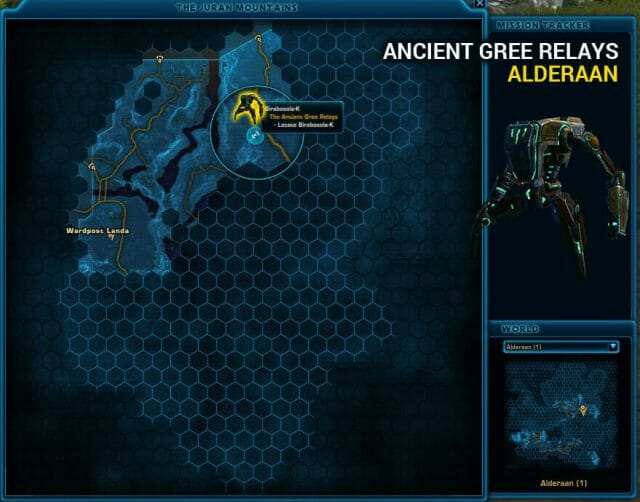 Dendotaloga-K is located in the middle of the Quesh map. 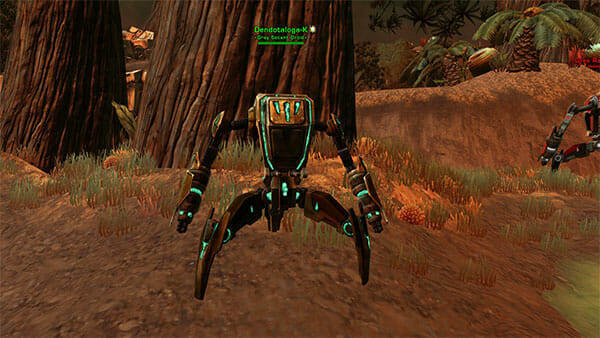 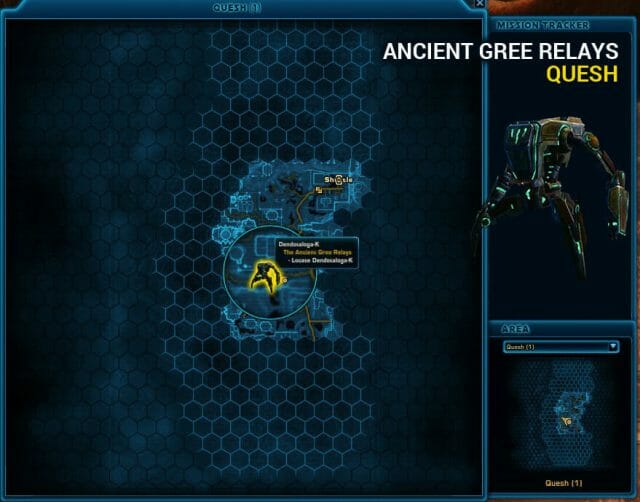 Gamrokodavi-K is on the Starship Graveyard map, the most eastern map on Hoth. 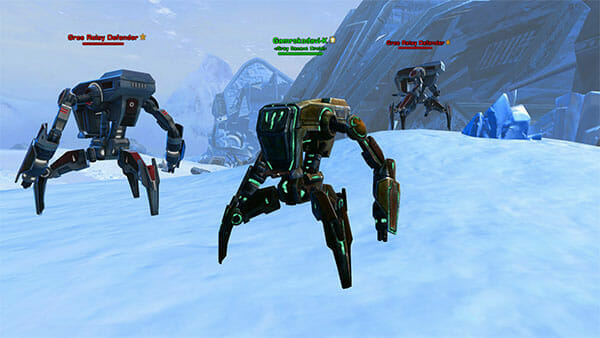 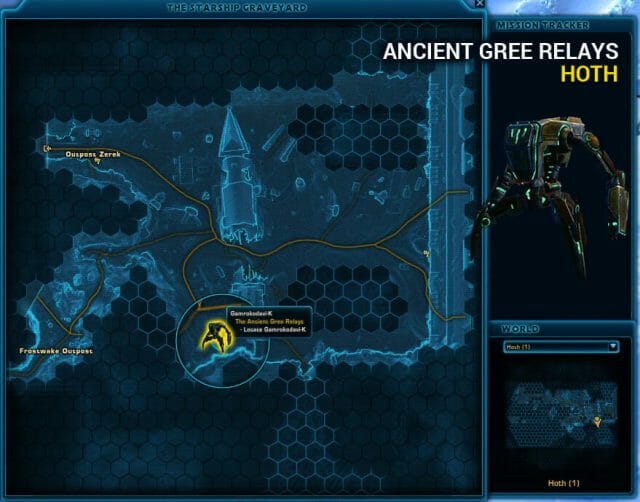 Lomasigaro-K is located south of the Shrine of Healing, the most western map on Voss. 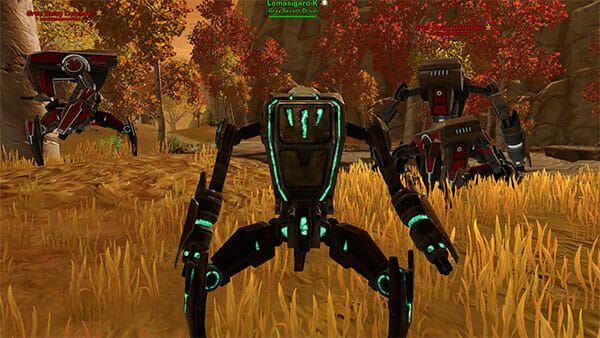 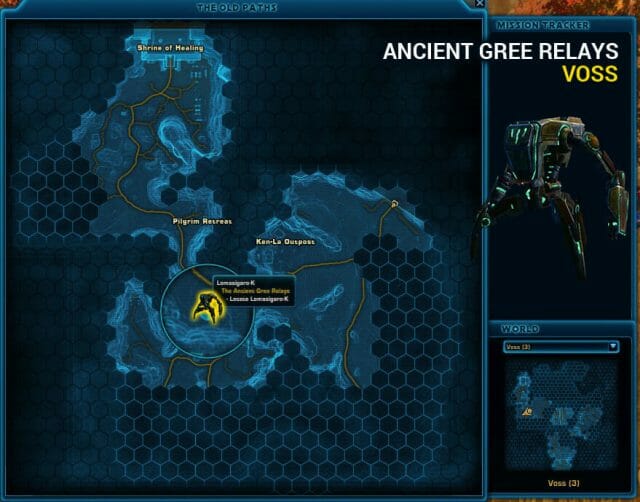 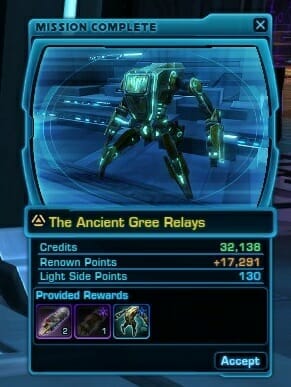 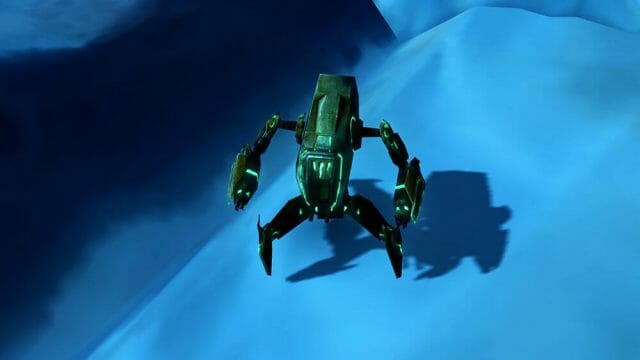