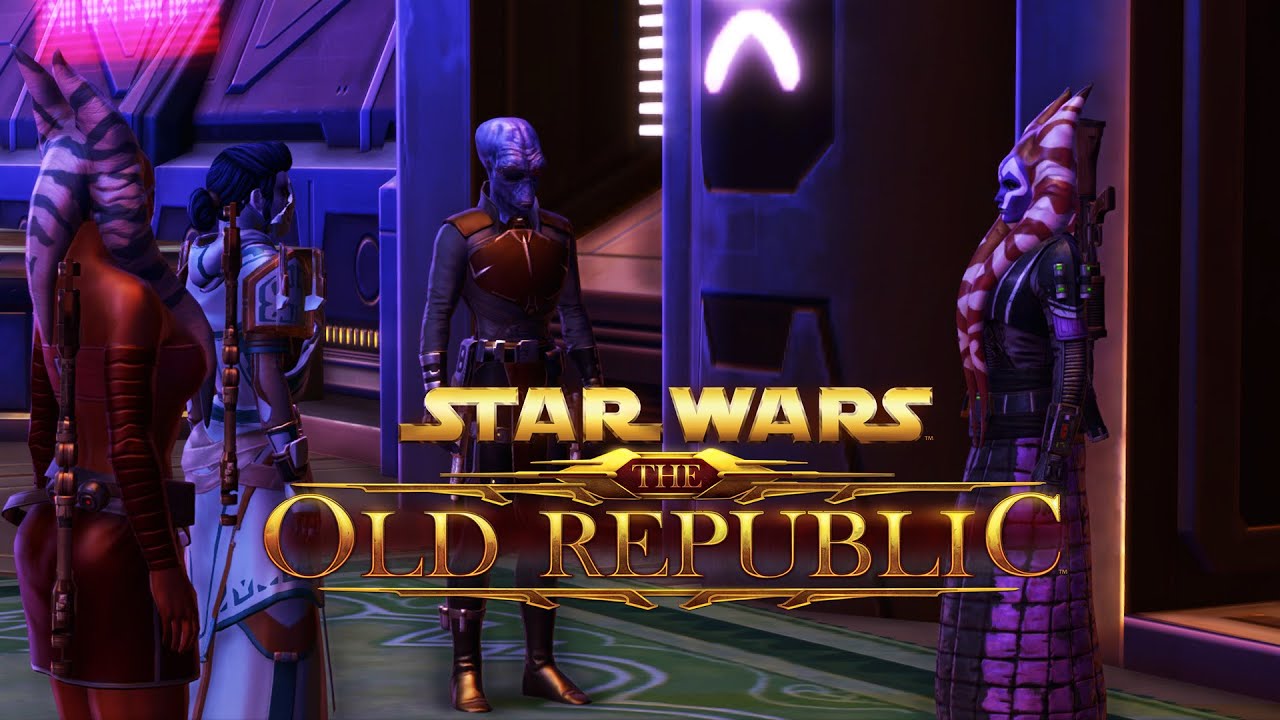 The first step is to get yourself the new Duros companion, Fen Zeil, who can be earned quite easily and is even available to free-to-play players, by earning the first level in Galactic Seasons. 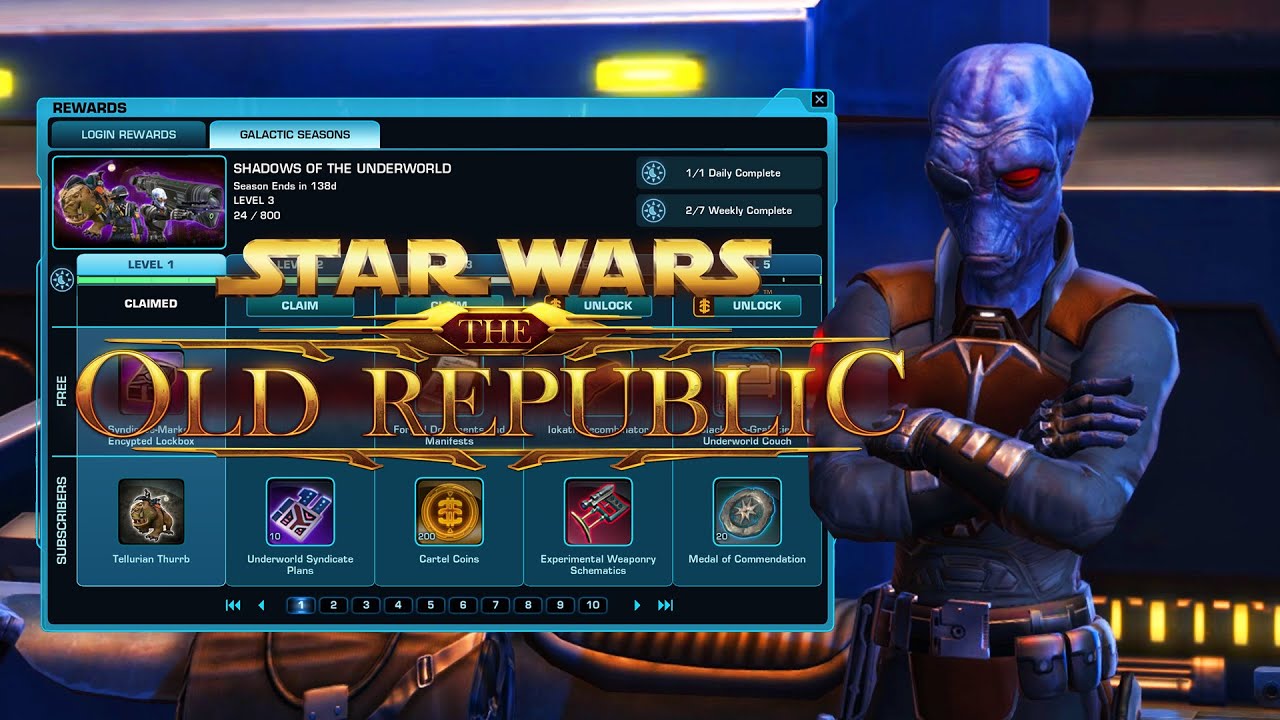 To open the Galactic Seasons menu, roll over the icon of a person in the main menu, and choose Login & Seasons Rewards from the dropdown menu. There are two tabs on this window, make sure to select Galactic Seasons at the top. 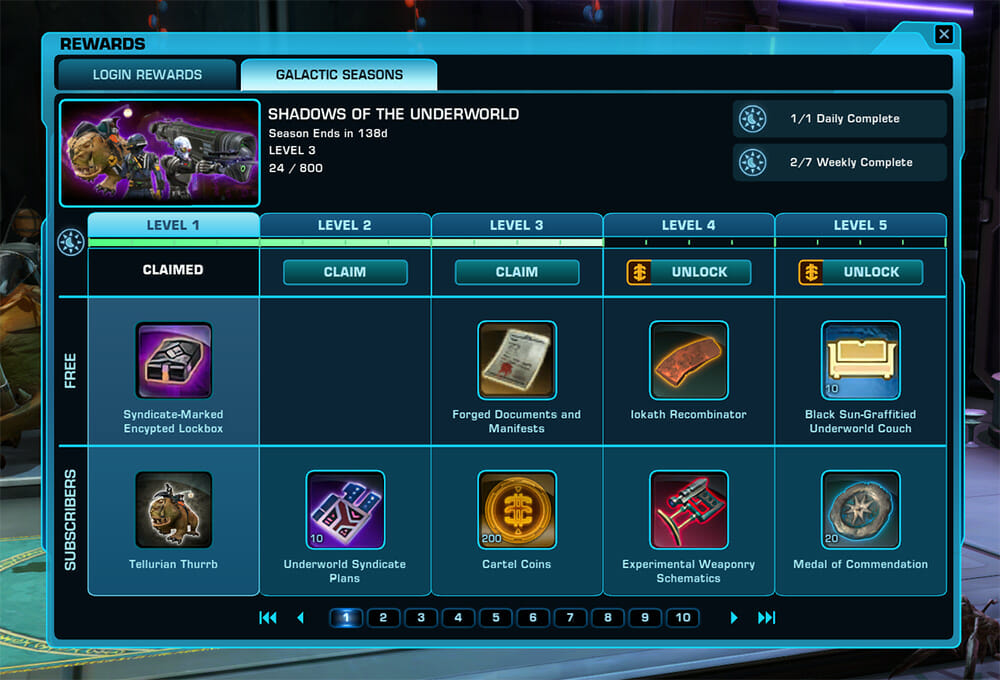 To earn Fen Zeil, the Duros companion, you need to complete 8 points worth of objectives – some objectives are worth more than others, and you can see their value by clicking on them in the objectives list. Only the activates listed in the Seasons Objectives tab count for Galactic Seasons points. 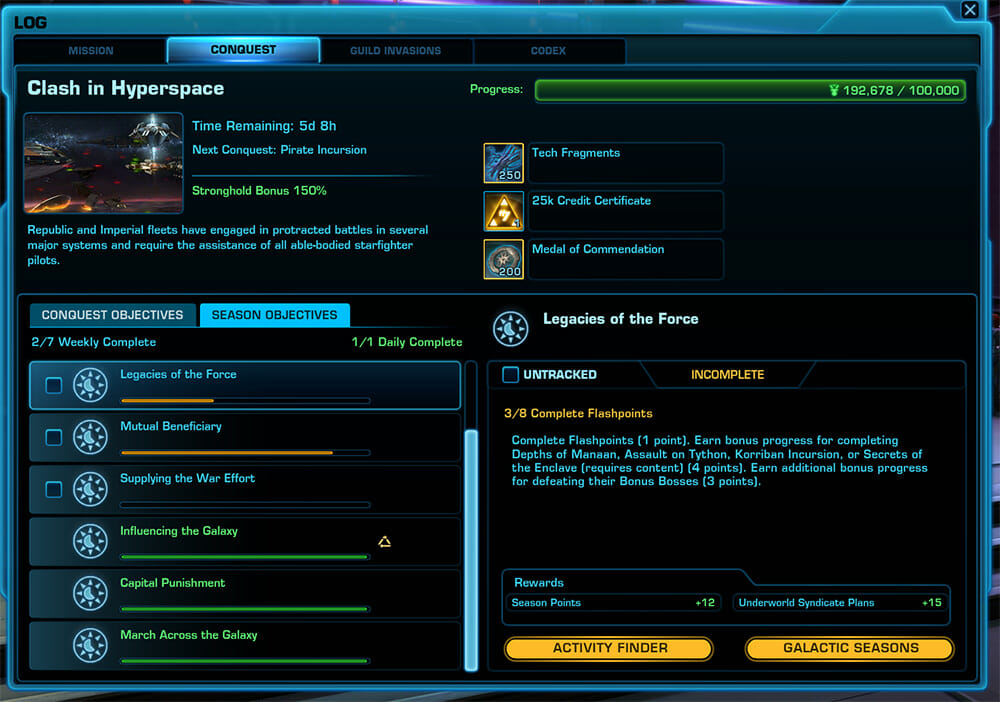 Once you have earned 8 points, you will be able to “Claim” your reward from the Galactic Seasons track.

Once you use the Fen Zeil item, you will be given the quest called The Shadow of the Underworld which will send you to the Upper Office atrium section of Nar Shaddaa, on the bottom left of the Nar Shaddaa map. This will let you speak and meet with your new companion, Fen Zeil, and give you a second quest called The Shadow Syndicate. This second quest will lead you to a Togruta in the Lower Promenade of Nar Shaddaa, who will explain that she wants you to bring her  Underworld Syndicate Plans.

Underworld Syndicate Plans are a type of currency you can collect that is directly tied to Galactic Seasons and The Shadow Syndicate Reputation track. You can see how many plans you have so far by opening your inventory and choosing the “currency” tab on the top right. You can hold up to 200 at a time and you can only earn up to 200 per week.

You can earn Underworld Syndicate Plans in this way:

Players who do not want to do group activities like Flashpoints or Operations will want to work on fighting enemies on planets with known Syndicate ties, which have a higher chance of dropping Underworld Syndicate Plans from enemies. These higher-chance planets include Corellia, Makeb, Mek-Sha, Nar Shaddaa, Quesh, Rishi, Taris, and Tatooine.

You can increase your chances of enemies dropping Underworld Syndicate Plans for 60 minutes by using a Jawa Intel item. You can buy this item for 500 pieces of Scrap: Jawa Junk, sometimes known as purple Jawa Junk, from a Jawa hidden in the Cartel Bazaar section of the fleet. This Jawa is located in the northern elevator of the fleet Republic side, and the southern elevator of the fleet Imperial side, and he is hidden behind a shipping crate behind some other Jawas. It is bound to your character once you buy it.

Brazz Jawa Bug: You will not be able to talk to Brrazz in a group. Leave group to speak with him.

Jawa Intel Tips: A player named Aldo messaged me and mentioned that they used the Jawa Intel on a Syndicate world (like Tatooine) and received very few plans while doing Heroics with the Jawa Intel active. They recommended to save this for when you plan on doing group Flashpoints and Operations as they seem more likely to drop there. 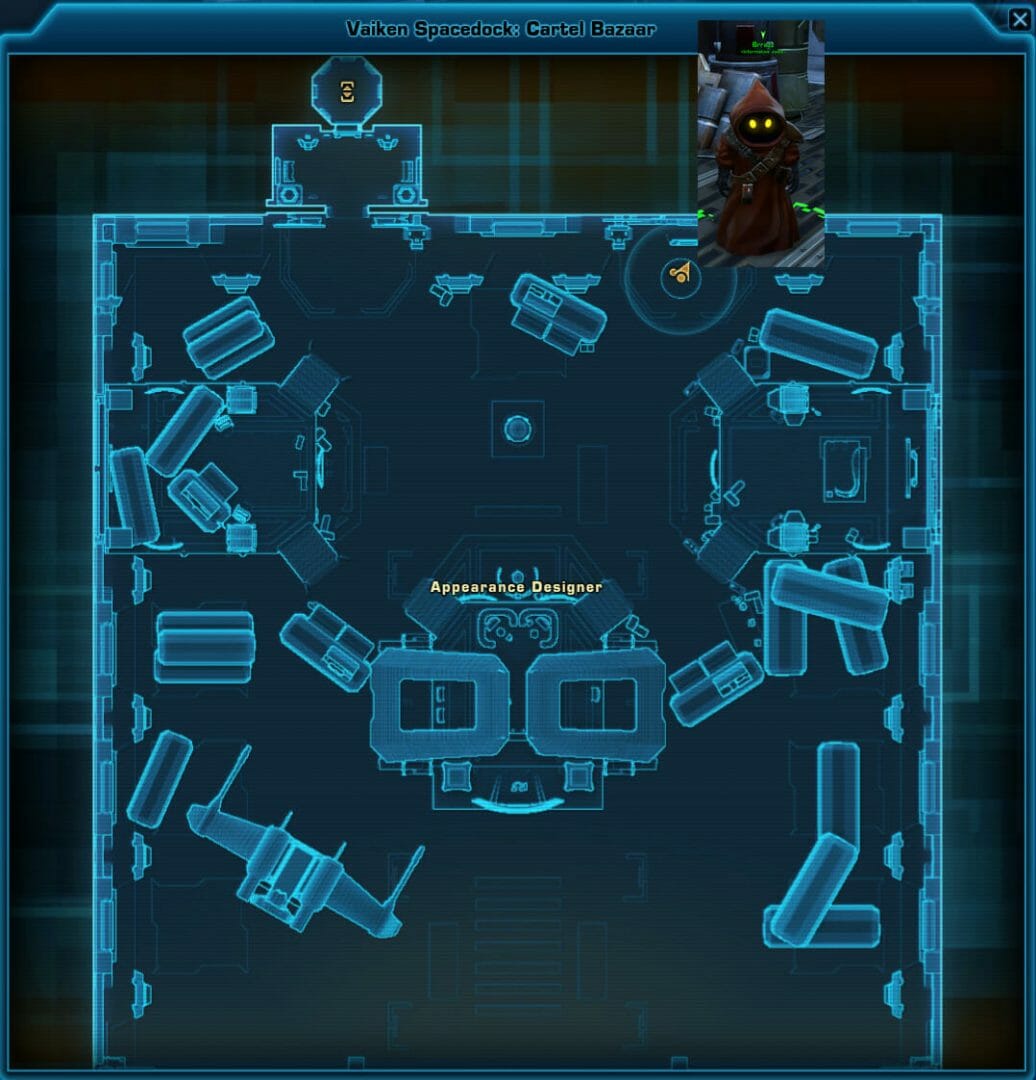 The Jawa mentions you can get purple Jawa Junk from deconstructing items. I tried deconstructing a blue-bordered pieces of 320 gear I got from a Flashpoint but did not receive any Jawa Junk.

You used to receive Jawa Junk from Conquest, but you do not in the current expansion. You can still get small amounts of Jawa Junk from the Daily Login Rewards.

I was able to get Jawa Junk from deconstructing old pre-expansion level 75 gear I had left over though! 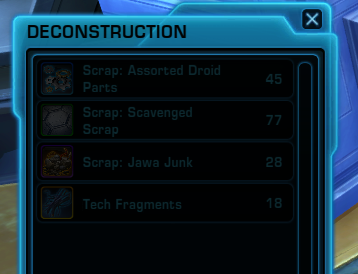 To turn in Underworld Syndicate Plans, go back to the Togruta named Qi’us Dnar in the Lower Promenade, north of the big Hutt Statue. 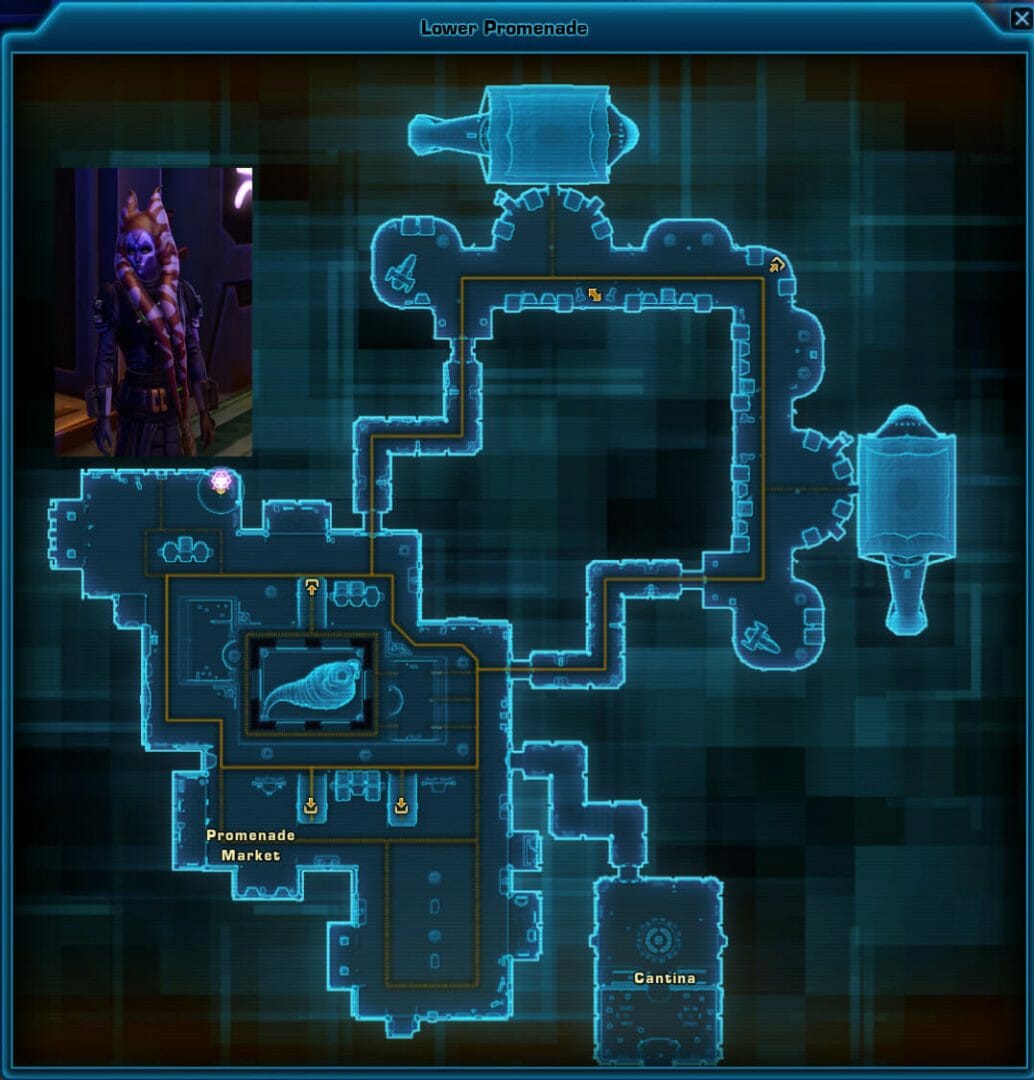 When turning in plans, you have a choice of how many to turn in, they all give the same value/ratio when actually used. Turn in as many as you want.

There are two Galactic Seasons weekly objectives that are related to the Underworld Syndicate.

The first objective is Infiltrating the Competition which asks you to obtain 40 Underworld Syndicate Plans before the week is up. This will give you 8 Galactic Seasons points.

BUG: There is some type of bug related to Underworld Syndicate Plans being counted for the weekly. In the screenshot below I have earned a total of 37 (and spent 20), but the counter for the Galactic Seasons Objective only counted 27 – ten were not counted for some reason. Maybe this was the highest amount I had before I turned some in?

The second objective is Mutual Beneficiary which asks you to earn 1,000 reputation with the Shadow Syndicate before the week is up. This will give you 8 Galactic Seasons points. 1,000 Reputation is about 40 Underworld Syndicate Plans worth of items. 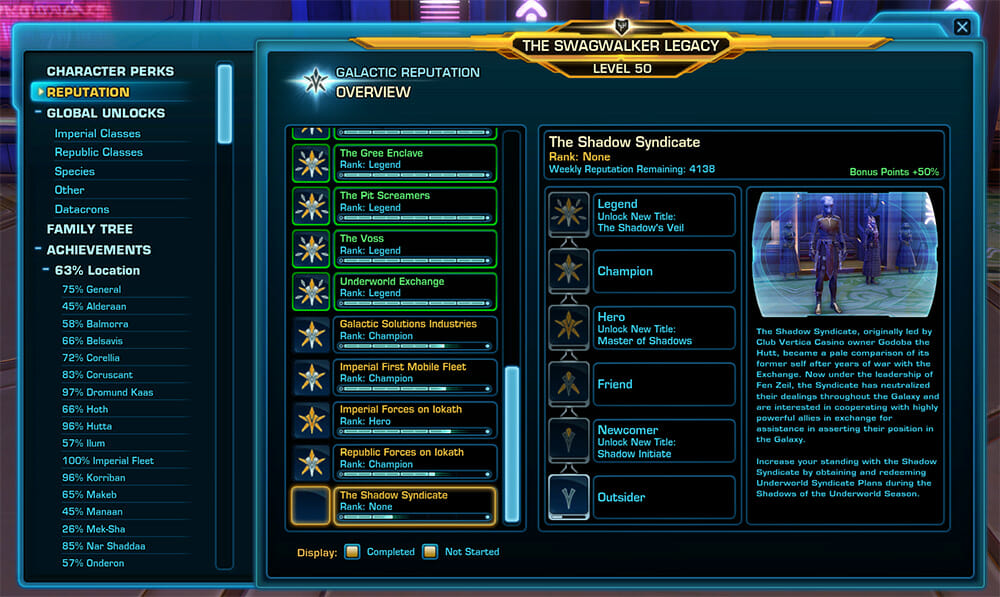 There are some legacy titles directly related to the Reputation track though:

(I have heard you need a total of 2,800 Underworld Syndicate Plans to reach Legend but I have not been able to confirm that yet.)

Players have spotted these glowing blue syndicate crates and consoles near where you meet Fen Zeil. It is unclear what these are for – perhaps they become useable as you move up the Reputation track and more quests unlock. They do not seem to be related to Fen Zeil’s influence level. 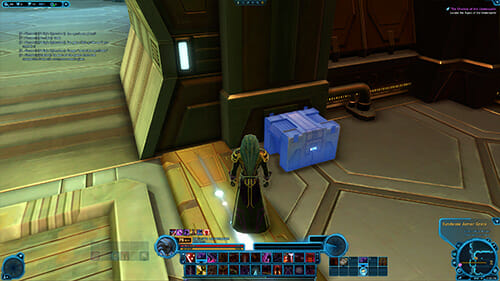 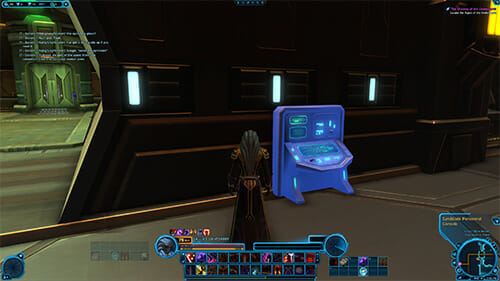 It may also be related to this Seasons Objective that was found through datamining – but I do not see this listed on the official Season 2 page so I don’t know if it will actually show up. (Thanks user DarkEye5!) 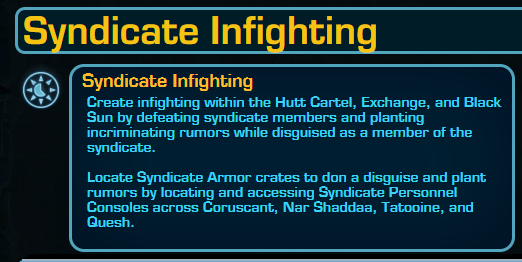 You can level Fen Zeil’s influence level with gifts from the Galactic Seasons track.

How much can I level up Fen Zeil?
With all of the Companion gifts between the two reward tracks, Subscribers who reach level 100 will be guaranteed to have Fen Zeil at Rank 50 Influence by the end of the Season.

How can I level Fen Zeil outside of Galactic Seasons?
Just as with other Companions, sending Fen Zeil on Crew Skill missions will increase his Influence. Additionally, the Commander’s Compendium will also increase his influence to Rank 50.

BUG: The developers are aware of a bug that causes you to not receive enough gifts to level up Fen Zeil to 50 for free through the track. hopefully that will be fixed soon.

I got Fen Zeil to Rank 50 Influence on my main character, but what about leveling him on other characters?
If you are a Subscriber, you will be eligible to earn 2 Shadow Compendiums through the Subscriber Reward Track! Just like a Commander’s Compendium, this item can be used to instantly raise Fen Zeil’s Influence to Rank 50. Additionally, once you have reached Rank 50 Influence with Fen Zeil, you will unlock a new Legacy Unlock that allows you to purchase Fen’s companion gifts with Credits. Visit Jaleit Nall, located in the Galactic Seasons alcove on the Fleet, to purchase the gifts.

(This unlock is located in the ‘Other’ tab of Global Unlocks in your Legacy panel.)

(Spoiler-free) There are two cutscenes you can unlock with Fen Zeil through Influence.

There may be more as you unlock Reputation with the Shadow Syndicate, I am unsure.

Getting Fen Zeil on a Second Character

Once you have claimed and went through the quest for Fen Zeil on one character, you can pay 10 Cartel Coins in Collections to unlock him on the rest of your characters. Once you pay for the 10 CC unlock, you can claim the box with both the instant-redeem item and the quest item for Fen Zeil – if you wanted to get the special Jaawa item make sure to go through Fen Zeil’s quest for that character. 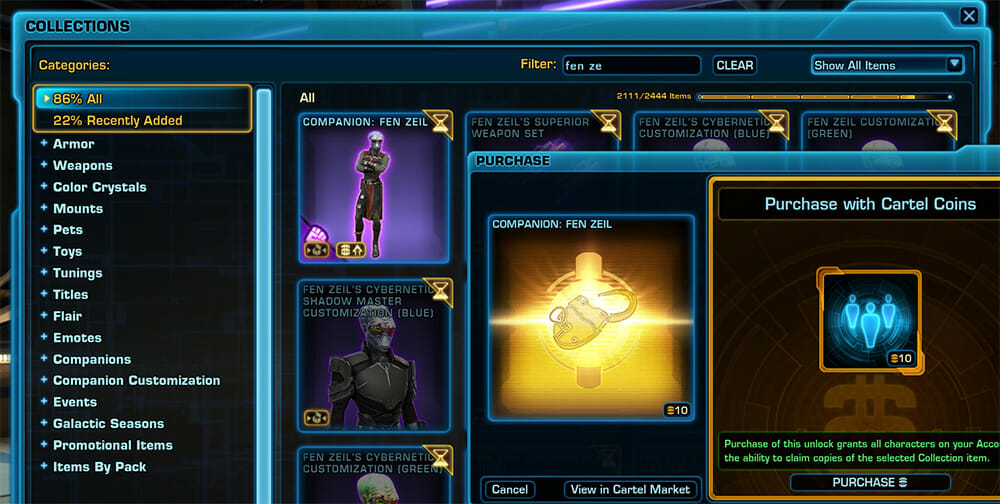 BUG: Some players are reporting that Fen Zeil is not unlockable on their other characters, even after they have completed his quest. I do not know the reason or the fix.