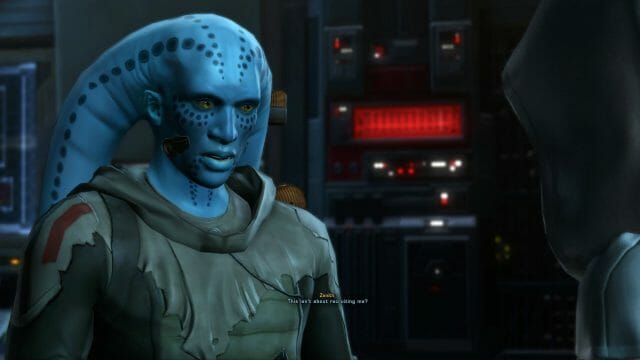 About: “Zenith” is the code name of a Balmorran revolutionary fighter who has made a career out of hurting the Empire. Once a member of a powerful resistance cell broken up by Imperial infiltrators, Zenith has struck out on his own, gathering followers from Balmorra’s oppressed population to launch sneak attacks, raids and bombings against the occupying Imperial forces.

How to start romance: To start Zenith’s romance on a Jedi Consular character, you need to play the Relentless Ambition Quest and be on a Jedi Consular. Relentless Ambition takes place after you compete Spirit of Vengeance which is after the Onslaught expansion, then the two small short quests Conflicting Priorities (also related to Zenith), then Relentless Ambitions. If you are a Jedi Consular you will be able to invite him to join the Alliance as a friend or Flirt with him and have him join the Alliance and join as a companion. Non-Consular Republic characters will still meet with Zenith, but Zenith says he will not work with the Alliance as they are aligned with Imperial. Later, however, players will receive a letter saying Zenith will consider working with them in the future, but will not have him as a companion. You’ll get two different letters depending on if you had him join the Alliance or not. This is not a full romance start, instead it is just a [FLIRT] “I want you to stay” option, with a true romance possibly later in the story updates. There is no kiss or hug, but a touching discussion about why the Jedi Consular wants Zenith to stay.

Romance continuation: None yet.