Augments are a way of adding additional stats to your armor in Star Wars: The Old Republic. They are available to low level players, but aren’t really worth it, and are more recommended for level 75 players who are working on the hardest content in the game including Ranked PvP and Master Mode operations. Players who are not working on those two extremely difficult types of content really don’t need augments, however they can still increase your character’s stats and give you a boost in combat. In this video, we’ll be going over the different types of augments, how to augment your gear, and a basic over view of the cost-benefits of the different levels and tiers of augments available in the game.

How to Get Augments

Unlike most other gear in the game, the main, and often only, way to obtain augments is through crafting – so you can either craft them yourself, have a friend craft, or buy them from another player who has crafted them on the GTN, the player run market. Augment schematics come from a variety of places, but the most recent set of augments come directly from the crew skills trainer, and other come from reverse-engineering that schematic from the trainer. You do not need to find the schematics on the GTN, in flashpoints, or through any other type of content in the game.

How to Augment Your Gear

To Augment your gear you need two things – an augment, and an augment kit.

While there are many different types of augments, all augments require an augment kit of the correct level before you can place the augment into your armor piece. The most recent type of augment kit is called the Augment Kit MK-11, and if you plan to augment every piece of your character’s gear, you will need a total of 14 of these, as you can augment every piece except your Tactical item. Augment kits are not re-useable, so make sure to place them on a piece of gear you plan to continue using – for example, you’ll probably want to wait until you have your set-bonus gear pieces and moddable main hand and off hand before you augment them, and make sure you have your stats at level 75 figured out before you augment your other pieces like your relics, implants and earpiece which should be at item-rating 306. As mentioned, there are augments and augment kits for low level players, but they are not necessary at all for low-level content, but if you plan to augment something like your level 60 gear if you are free-to-play, you’ll want to follow similar rules like make sure your armor pieces are moddable and make sure your earpiece, implant and relics are ones you plan to hold on to for a while so their augmentation wasn’t a waste of credits.

Although augment kits disappear once you use them, augments themselves can be taken out of your gear by right-clicking them in the mods panel, so you can swap them out easily. Once an augment is used once however, you will no longer be able to sell it on the GTN, so try not to buy then use the wrong ones or you’ll be stuck with them.

Which Augment Stats are Best?

There are many different types of augments, and each kind has a difference balance of stats. Players often ask, “Which type of augment is best?” but there is no 100% correct answer – instead you should be building your augment set based on your current armor’s stats, with the goal of reaching specific overall stat numbers combined throughout all your gear. For example, if you need more alacrity, but you already have a ton in your boots and gloves, you don’t need to buy alacrity augments too. On the flip side, if your armor doesn’t have any alacrity, you can supplement it through your augments. Augments are great for fine-tuning certain stats like alacrity and accuracy as augments give you a smaller stat boost than your pieces of armor do – so for example if you only need 100 or so more points of Alacrity to meet your goals, adding an alacrity augment is a great choice.

In addition to this, figuring out your stats if you are planning to do more difficult Operations is even more complicated, as even if you are level 75, almost all operations will temporarily lower your level down to level 70, and this includes giving some of your stat a “cap” so that they can not go higher than a certain amount even if you have the best augments in the game. A quick rule of thumb is that in level 70 operations, you have LIIMMITTTEDDD PPPOOOOWWWEERRRR! but you can have unlimited crit – but in the level 75 operations, your power stats goes back to normal and is a bit more nuanced.

To figure out exactly how much you are shooting for when it comes to your stats depending on your class, here are some fantastic guides by player Merlyn that are my go-to for figuring out my stats.

Which Augments are best?

In addition to different types of augments, there are different tiers of augments – they all have similar patterns when it come to their stats, but allow you to add a few more points to your overall gear stats the higher up you go. The downside is that the best augments in the game are incredibly expensive with minimal return on value compared to the less expensive ones, so it will be up to you to decide your budget.

One great set of advice is that “some” augments are a TON better than “no augments”. So you can get a great boost just by buying the cheapest high-level augments in this guide. My suggestion for the cheapest augments with the best stats for your credits are the blue-bordered augments that are for level 73 and up, they are item-rating 286 and have the number “73” in their name – for example Alacrity Augment 73. On my server, at the time of making this video, they run for about 200,000 credits each, so you could easily afford a full set just by running two hours worth of heroics. The coolest part is you may be able to craft these for yourself without too much hassle as the schematic comes straight from the crew skill trainer at crafting level 680, with Armormech, Armstech, and Synthweaving each getting their own augments to craft.

The best augments in the game are the gold-bordered Superior 77 Augments with an item-rating of 300. These offer the best stats for augments in the game, but come with an incredible price tag  in the high millions each. For example, at the time of making this video, the Superior Alacrity Augment 77 was priced at 621 million on my server, which is pretty insane. This is because the materials required to craft these rare augments are very scarce and difficult to get. Each augment requires 7 of the OEM-37 crafting material that only comes from Master Mode Operations, 14 of the RPM-13 crafting material that only comes from Ranked PvP, and a small pile of other rare crafting materials on top of those special ones. Only the top 1% of the playerbase should even really consider getting these, and if you had some credits to splurge and want to have a step up from the blue-bordered augments I mentioned, I suggest checking out the intermediate step of the purple-bordered 74 augments, like the Advanced Alacrity Augment 74.

In terms of cost and highest stat boost, here are the recent augments in the game. 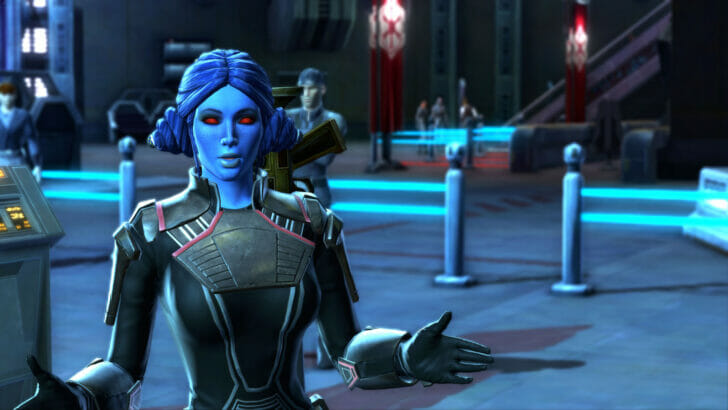 Pssttt… this is actually the end of the guide. The rest of the information is supplementary for players who really want to dig in to augments, or need the exact names of the augments they are looking to buy! – Swtorista

This is a full list of all the augments available in the game for high-level characters. Roll your mouse over the augment to see its stats.

A majority of augments are obtained through crafting. Some schematics come directly from the crew skill trainer while others must first be reverse-engineered. Roll your mouse over the craftable augment to see its stats, schematic and crafting materials required.

These are some of the materials you may find in the schematics for crafting augments.

Best Augments in the Game 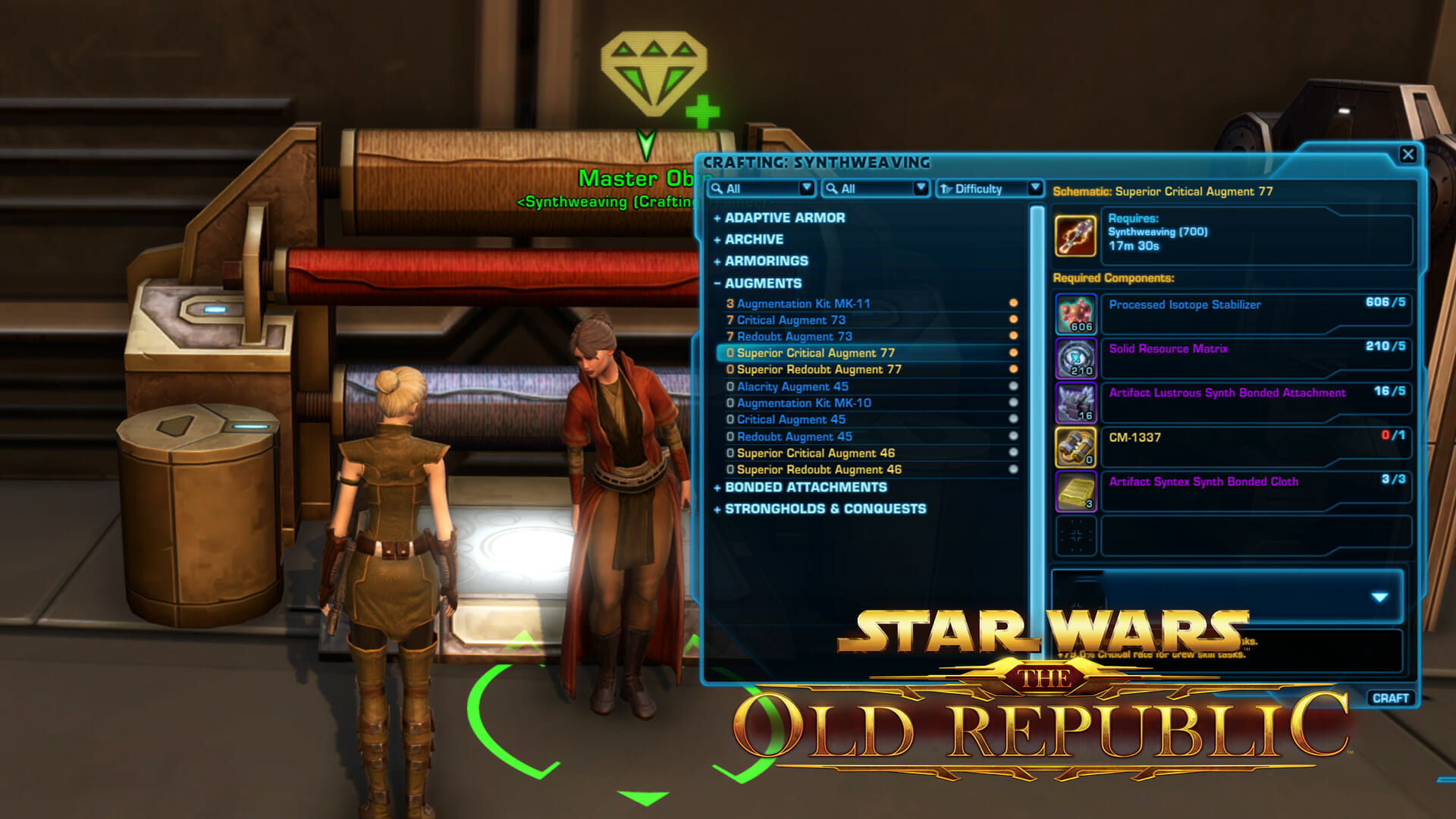 A new tier of Legendary quality Augments at Item Rating 300 have been added to Star wars: The Old Republic, making them the new best augments available in the game. The augments will be extremely expensive if you choose to buy them from other players, and they require materials that can only be earned through both Ranked PvP and Operations. Most players will likely skip these augments as they will be prohibitively expensive, or require a lot of time and effort in the most difficult parts of the game to obtain. In this video we’ll be going over how to craft these new augments and where their materials come from.

Why is there a new set of augments?

There are three reasons new augments were added to the game – the first is to give players working on the most difficult operations a way to boost their progress by obtaining the new augments, and the second is to give players who are already geared up a profitable reason to go back in to Master Mode operations, and lastly, to encourage players to jump in to Ranked PvP to gain the expensive materials as a reward.

The developers released this info when they were first teasing the new augments:

How do you craft the new augments?

To craft a single augment, you will need in total:

First you must craft, have crafted for you, or buy the CM-1337, which can be crafted by all Cybertechs who have a crafting level of 700, the schematic comes directly from the trainer. This CM-1337 item is made up of the 7 OEM items, and 14 of the RPM items, and 5 Legendary Embers. Then you can take that CM-1337 item and combine it with the Processed Isotope Stabilizers, the Solid Resource Matrixes, and the crafted components to get your augment, using the crafting skill that lines up with the augment you want to make. The schematics for these new augments come directly from the crew skill trainer. So Cybertechs craft the CM-1337 component, Armstech crafts the Accuracy and Shield and Versatile augments, Synthweaving crafts Critical and Redoubt augments, and Armormech crafts the Absorb and Alacrity augments, and Artifice and Biochem can’t craft anything to do with augments.

If you feel the crafting materials costs are high, they were actually reduced from 15 OEMs and 25 RPMs per augment based on player feedback before they were released!

This new crafting material OEM-37 only drops from Master Mode operations, the most difficult type of group content in the game. It drops as a Need/Greed/Pass drop, so all players have a chance to roll on this material as long as the loot rules are not set to Master Looter.

This new crafting material RPM-13 only drops from Ranked PvP quests, the competitive version of Player-vs-player content. The different daily and weekly ranked quests have different percentage chances to drop an RPM. One important thing to note is that completing the dailies and weeklies require Ranked wins, not just participation. 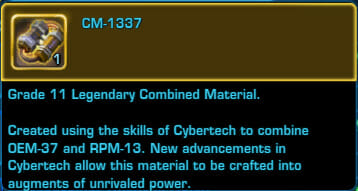 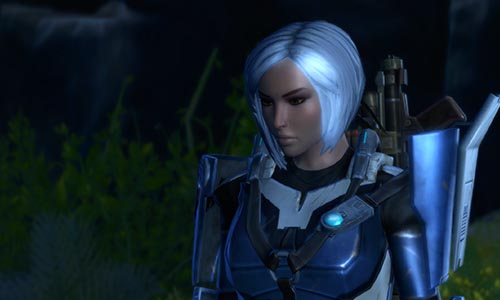