The SWTOR user interface is highly customizable. You can decide what show up where, how big it is, and even if it shows up at all on your screen. There are hundreds of settings to play with, and once you feel comfortable playing the game I highly recommend digging into the settings to cuzomtize them to fit your playstyle. 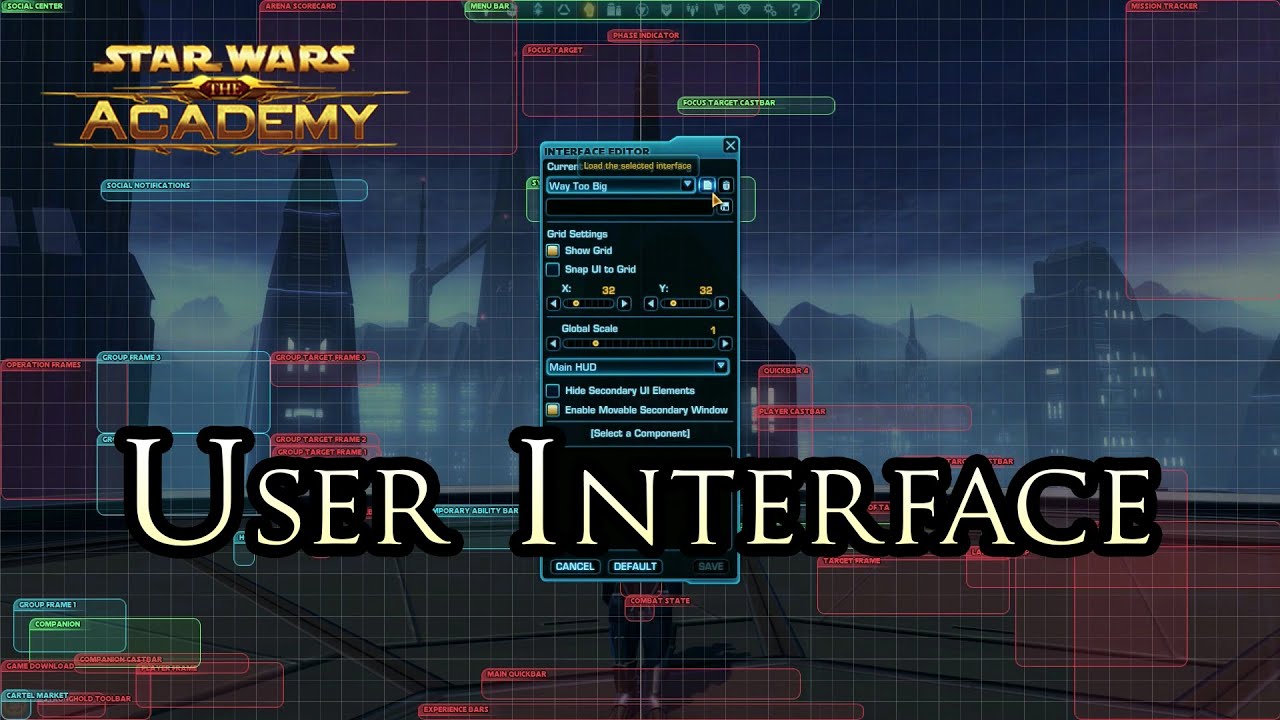 There are two main places where you can edit what shows up on your screen while you play SWTOR. The main preferences panel, and the user interface panel.

To get to the settings, press ESC > Preferences.

On the controls tab on the left, some settings I always turn on include “deselect target upon clicking on terrain”. This setting lets you dis-engage anything you have targeted by easily clicking on the ground – very handy when you want to take screenshots!

Another setting I turn on in this panel is “Camera Max Distance” to 100%. If you want to zoom your camera out even more, search online for “SWTOR zoom out more” to learn how to edit your game files so you can zoom out super far.

The next set of settings is in the User Interface tab. If you want to switch up how you watch cutscenes, you can turn subtitles on or off in these settings, as well as turn off the indicators that show you whether a choice is darkside or lightside.

A setting I recommend EVERY player turn on is “show detailed item tooltips”. When you get new gear, this setting will allow you to see exactly what stats the new armor piece has when you roll over it.

You can also edit what nameplates you see in the Nameplates panel. The ones I check and uncheck the most offten is on Enemy NPCs, Friendly players, and Enemy players. Turning off nameplates completely can help your game’s performance.

Speaking of performance, the graphics panel is also in these settings. If SWTOR runs very slowly or stutters for you, try turning down the “graphics quality preset”. Another setting that makes a huge performance difference is turning the shadows off.

Another thing you might want to turn on and off on your screen is the “flytext” the numbers that pop up when you deal or receive damage from an enemy. As a tank I like theme turned off because I would rather watch my healthbar – DPS often like them on because they can see exactly how hard they’re hitting the boss.

The editor is great because not only can you edit everything on your screen, you can also save different interfaces. For example, I could have an interface for roleplaying, where almost everything is hidden. Or an interface for raiding, where things like buffs and debuffs are made very big. I even have a special interface I made for this series where I’ve hidden unnecessary parts of the interface and made everything extra big so you can see it!

To save your current interface settings as a new interface, type a new name in the box then pres the floppy disc symbol to save it. To load up an old interface, choose it from the dropdown at the top and press the “page” icon to load it. The best part is interfaces are shared across your characters – you can create your perfect interface, then share it across all your characters.

When you open the interface editor, by default, you can edit what you normally see when you play – things like the menu, the map, your quickbars and your healthbar. There is a dropdown called “MAIN HUD” that you can choose from if you want to edit things like the conversation interface or your stronghold interface.

To edit an individual panel on your screen, simply click its colored box. A bunch of settings will appear for it on the Interface Editor, including a checkbox to enable it, an opacity slider, a scale slider for size, and then occasionally some special options unique to that panel below.

With so many options available, its up to you to find your “perfect” setup. When creating a new interface, I usually load up he default “Advanced” interface, and go form there, turning on the things I need and turning off the ones I don’t want to see. I also often turn down the opacity of things I am familiar with like my abilities and the main menu, so I can see more of SWTOR’s beautiful scenery.

While every setting is mostly personal preference, there are some non-default settings that I recommend all players turn on – especially if you are doing group content!

“Target of Target” is one of the best secrets hidden in the interface editor. If you are doing PvP warzones, it will allow you to see who exactly your enemy is attacking and allow you to plan around that. If you are in a flashpoint or operation, it will allow you to see which of your groupmates the boss is currently attacking. The boss is always supposed to be on the tank… but sometimes it isn’t, and if you are a DPS or a healer, knowing the boss is on you might give you enough warning to use a defensive cooldown and savre yourself until the tank can pick it up again. For tanks, the “target of Target” setting allows you to know EXACTLY when you’ve accidnelty lost the boss and will let you know when you need to use an emergency taunt! To turn “Target of Target” on, look for it near the target’s frame in the bottom right, then enable it.

Another setting worth playing with if you are pvping or doing operations is the buffs and debuffs panels. You could change your interface by making your bebuffs really big, so you know if something bad is happening to you. There’s also a checkbox on the interface editor to seperate personal effects and sort them by time or duration. Tanks doing operations will especially want to play with their debuff settings, because many fights require tanks to swap when they have a certain number of stacking debuffs.

Many players also play a lot with their quickbars – exactly where they go, how big they are, and where they are in relation to the other quickbars.

On my character I am familiar with, I have my quickbars fairly small because I have a lot of my abilities tied to keybinds or know exactly where they are.

On my character I’m not very familiar with, I made the quickbars huge, and sorted my abilities so I could easily see what order I should be using them in.

On my levelling characters, I turned off all the extra quickbars because I only have a few abilities!

Outside of battle, there’s also a few things you can move out of the way depending on what you want to see.

You can’t hide the cartel market symbol, but you can make it smaller, lower its opacity, and move it out of the way.

Don’t forget when you are moving things around, there’s also a handy grid to help you line things up.

If you want to try out some interfaces that other players have made, you can visit swtorui.com. Make sure to read their frequently asked questions to learn how to install the interface files.

With so many settings available on the interface editor, you’re bound to find something you like! Every player’s interface is unique, so don’t be afraid to customize yours up.