The Chat System is the primary way of communicating with others in Star wars: The Old Republic. You can use it to chat socially with others, find groups to play with, and ask for and offer help – and there’s a whole lot of ways to customize it. 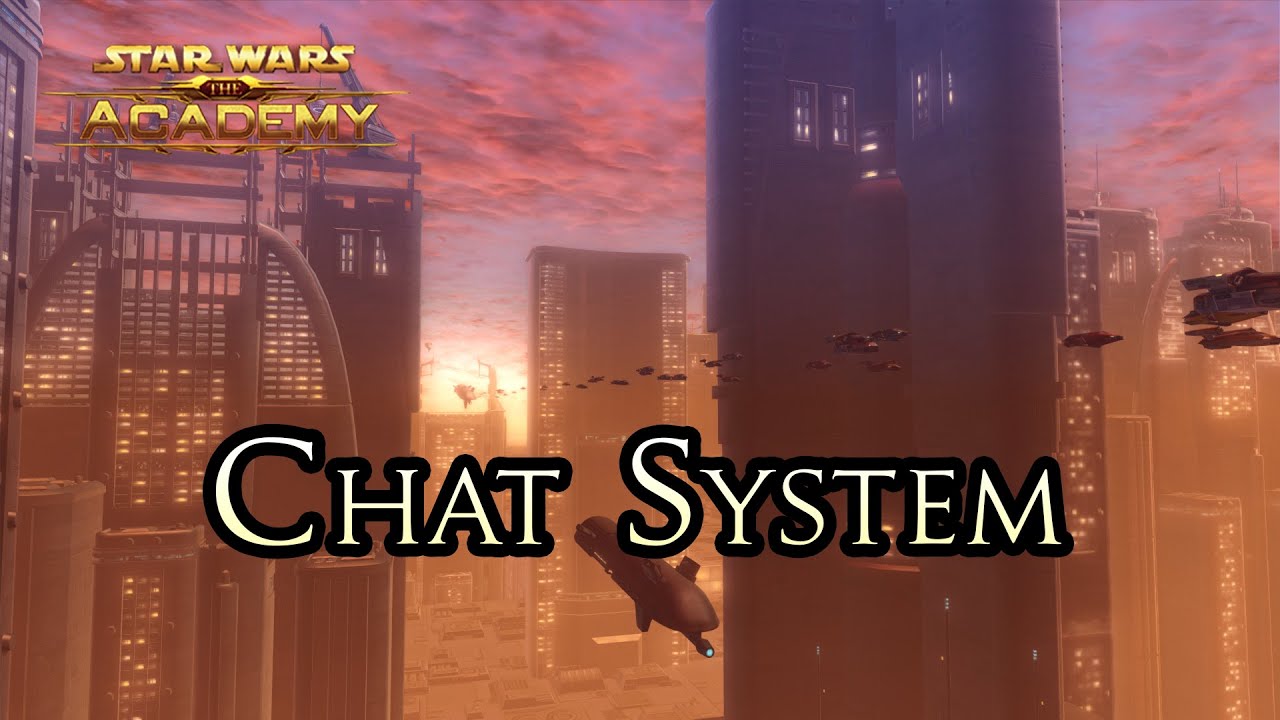 SWTOR chat has many different default channels. The one you will see the most is called “General” – everyone who is on the same planet or ship as you can see it. For example, if you are on Coruscant, everything you post or see in general chat is seen by everyone else on Coruscant. Because it’s the default chat, it’s also the most prone to include spam or rants. You can type in general chat by first typing /general or /1 in the chat box. An easy way to start typing in chat is to hit “Enter” – or you can click on it manually.

The two other planetary-wide channels are “trade” and “pvp”. Trade chat is meant to be used for advertising cool items you have for sale, or for posting about items you are looking for. Make sure to always check the GTN first for prices and availability!

PvP chat is used to discuss player-vs-player content, like warzones and open-world pvp. You can chat in either of these channels by typing /trade or /pvp. All three of these planetary-wide channels show up as white by default, and can only be seen by your faction.

There are also three local channels – they can only be seen by those near you. “say” chat is often used for roleplay, shows up as white text, and you can chat in it by typing /say. “say” chat is currently the ONLY channel that can be seen by a member of the opposite factions – so a Jedi and a Sith could talk together in say chat!

The emote channel is also used by roleplayers and is short-range, but acts differently than every other channel. You must first type /emote or /e and then follow it up with an action your character would take – for example, if you type “/e takes a drink”, it will show up as “the name of your character takes a drink.” as if it were an action, not something that’s being said. Typed emotes show up in orange text, just like the built-in emotes like /dance.

There’s also “yell” which functions like say, but shows up in red text. It’s not used very often. Neither of these can be seen by the opposite faction, so if you are roleplaying, keep in mind your buddy might not be able to hear you if they are on the opposite faction.

“whisper” is a great feature for talking to another player privately – or just to chat with them without having the whole server jump in to your conversation. You can whisper another player who is online and in the same faction as you by typing “/whisper” or /w”, a space, then their character’s full name, then a colon the symbol that’s two dots stacked on top of eachother :). That message will go to them and them alone. What’s nice is once they reply, instead of typing it again to reply to them, you can just click their name in chat and it will pre-fill it for you. You can also sometimes whisper people by right-clicking their portrait if you have them selected. Whisper chat shows up in a light purple font, and works anywhere on the server.

Group and operation chats are created every time you enter a party. If you are in a party you can type “/p” to chat with your party. This is a great way to talk about strategy if you are doing a flashpoint, or to let people know which heroic you want to do next. Groups by default can have a maximum of four people, and party chat shows up in blue. Operation chat opens up when the group leader turns the party into an operation group, which can have a lot more pople. To talk to your operations group, type /ops. Ops chat shows up in a light orange color. If you are in an operations group and are either the group leader or an assistant, there’s a cool feature called “raid announcement” which lets you easily share a quick message with your entire group. This is great for calling out instructions during a fight – for example, if you type “stop attacking” in the raid announcement, your group will see the words “stop attacking” in big red letters in the middle of their screen. To type a raid announcement type /ra. Your group members can see party chat and operations chat no matter where they are.

Another handy feature groups often use is /roll. It will roll a die between 1 and 100 and show the results in chat to everyone on the same faction nearby. This can be used to determine who gets loot, for roleplaying that’s numbers based, or in any case where you might need to decide an outcome by chance. Operation groups will sometimes set the loot so only the leader can assign it, then have players /roll to win a piece – ensuring that loot gets passed out fairly and no player gets it all by pure luck – when you win something through /roll you are banned from rolling again on a feature piece of gear.

Guild chat opens up whenever you are in a guild. Guild chat can be seen by any guild member, no matter where they are in the galaxy. Guild chat shows up in light green text, and can by typed in with /g. Guild chat is often considered a haven from general chat – in general chat, anyone can speak up about any crazy topic, but in guild chat if you say something your guild leaders or guild members don’t like… you can easily be removed from the guild! Guild chat is often a great place to turn to for help, advice, or people to group up with, depending on your guild.

There are also a bunch of chat channels like non-player character conversations and dialogue, system feedback, and information texts.

All of these chat channels can be controlled and turned on and off in the Chat Panel Settings. To open the Chat Panel Settings, go to your chat tab ad right click on the tab’s name – it should be labelled “General” by default. From the dropdown, choose Chat Settings. In this panel you can control two things – whether any of these channels show up on your chat tab, and what color they show up in.

You can change the color by clicking the little color boxes beside the channel names. It might be useful to you to differentiate the /say and /general chat with different colors, as they both default to white. You can also “tone down” a chat by picking a dark color like dark blue to make it harder to read and easier to ignore.

If you do not want to see a chat at all, you can “turn it off” by unchecking the box on the right of the chat’s name. Many players uncheck “general” chat because if often contains political talk and immaturity, because of its open nature. You could also choose to turn off all public chats like trade, pvp, say and emote, if you only want to talk to those you choose to group up with.

If you want to unclutter your chat a bit, I suggest unchecking “System Feedback”. It gets rid of a lot of the “yellow” text. If you ever want to see it, it’s conveniently located in the “other” tab beside your “general” tab.

You can also make custom tabs. For example, you could have a tab that has just guild chat in it, so you can go back and review messages that might have gotten lost in the shuffle of the other chats. Or, you could make a “roleplay only” tab, that has the say channel and the emote channel and nothing else. To make a custom tab, right click any of your existing tabs and choose “Create New Tab” from the dropdown.

You can also join custom channels. Custom channels are created by players, and usually focus around certain topics. They don’t have any moderation available, but you can join or leave them at any time you like.

For example, my server has a global channel called “allies” which focuses on endgame operation groups looking for more players. There’s also “enemies” which is a chat about pvp, usually about ranked pvp. There’s also a bunch of channels focused around rp!

To join a channel, type “/cjoin”, a space, then the channels name. To leave a channel, same process, except type “/cleave”. If you are new to a server, try checking the swtor.com forums to find out if there are any widely-used channels you can join!

Because all the public chat channels have no requirements to join, sometimes people may join chat who are about as smart as bantha poodoo. If you see someone spamming, posting annoying things, or being downright nasty, feel free to right-click their name and choose “ignore”. This will prevent you from seeing messages from them. Keep in mind this may cause problems if you end up grouped with them for pve or pvp!

You’ll also sometimes see spambots trying to sell credits in general chat by telling you to visit certain websites on the internet. Buying credits online is extremely against the terms of service and is also dangerous to your game account and credit card account… so not only should you ingore these types of messages, but you can also report these messages to Bioware by right clicking the spammer’s name and choosing “Report Spam”. Although it won’t stop them immediately, if enough reports come in, the spammer will be temporarily muted.. and then eventually banned!

The chat system can be as simple or as complex as you want it to be… the types of people you chat with and listen to can really change how you enjoy the game – so get rid of the bad and bring on the good with the chat settings!