About: The son of refugees made homeless during the Great War, Lieutenant Felix Iresso has been a career soldier for many years. His file shows participation in several notable battles, including the so-called Eight-Hour Invasion of Dubrillion where Republic forces repelled an Imperial invasion force with minimal reinforcements. Since then, Lieutenant Iresso has earned excellent technical scores and commendations for exemplary service. However, his file also contains some discrepancies. Lieutenant Iresso has one of the highest transfer rates in the Republic military, serving under almost a dozen commanders across the galaxy in two years. The lieutenant has also been overlooked for promotion several times. The only explanation from his superiors is a reference to an incident on Althir where Lieutenant Iresso was captured by the Empire, but no details are given. 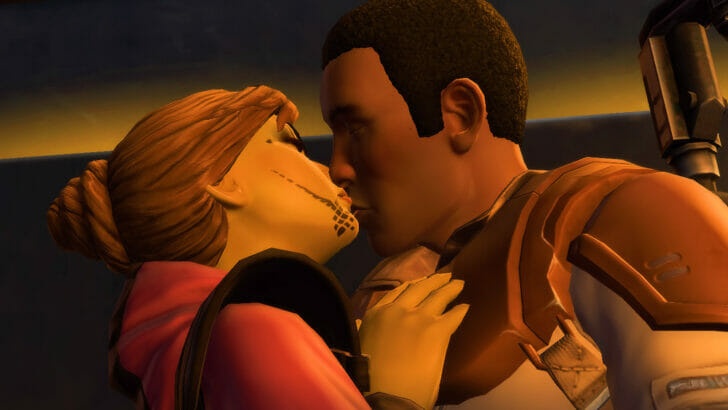 How to continue romance: Players can resume their romance with Felix after the Knights of the Eternal Throne expansion and before the Onslaught expansion. Press N on your keyboard to open the Companions & Contact menu. If you have not done To Find a Findsman, pick that alliance alert up and complete it first, and then the alliance alert Jail Broken will become available in the Companions & Contact menu as long as you have finished Knights of the Eternal Throne. The player will have a reunion on Odessan, and during the conversation Felix will promise to love you for this rest of his days and the player can choose “I love you, too” or “It’s not right, Felix” to end the romance.  If you choose the love option a box will pop up that says “This choice will start your romance with Felix Iresso. Doing so will end any other romances you may be involved in. Are you sure you want to proceed?” click Continue will lead to a kiss.