The Makeb Green Endurance Datacron is located in the Frinn Mesa map on Makeb grants Endurance +10.

The Makeb Green datacron is in the Cliffs and Maintenance Shafts and is available to both Imperial and Republic players. Finding this datacron will give you a permanent stat boost of Endurance +10 to all your characters on your server, and will unlock the Galactic History 89: Capturing the Dread Masters codex.

How to Get the Makeb Green Endurance Datacron

Republic side, the starting point is very very close to Frinn Mesa where you quick travel or taxi.

Imperial side, the closest taxi is Frinn Mesa Shuttle, which is way to the north of the island. There is a closer Quick Travel point called Frinn: Sunken Pool if you have it unlocked.

Find the Start of the Path

Follow the path around the side of the mountain, jumping down small jumps as you need to.

Fall Down to the Elevator

Once you reach a point where you can’t go any further, look down.

There’s a little edge of green platform sticking out you can fall down to, I recommend to turn on walk for this fall. To turn on walk, press the slash key above your number pad on the top right of your keyboard.

Take the elevator to the Maintenance Shaft.

Go to the End of the Bridge

There may be an enemy in the way, just sneak to the side of him.

At the top its a bit tricky because another metal post runs into it. You want to walk on the tiny tiny led on the right. Turn on walk.

You’re not trying to go all the way up it, or up the other diagonal metal post, but instead onto the tiny edge of the horizontal beam that connects them both.

From there, take the little beam that makes a perpendicular T shape to go under the top of the bridge.

Your next goal is to get onto the round pipe that is at the end of that T shape.

I usually mount up here and get a running jump to get on the round pipe.

Once you are on top of that round pipe, find the rounded pipe with orange stripes, and carefully jump onto it. You may need a little running jump, not a big one.

You can them jump up the two rectangular beams that are crossing it, so you are on top of the bridge.

You’ll want to jump up the bent rectangular metal beam to get all the way on top.

From there you can run towards the big metal platform, and get up onto it by jumping on the red pipes.

Eventually you’ll have to fight some enemies. These enemies can knock you off. Before you fight one, run over to a wall and put your back to it, so if it knocks you back, you just get knocked into a wall.

There will be a point where you can no longer run forward. Look down, there will be another ledge below to fall down to.

Then down some more. Make sure to heal up as you fall and take damage.

Just keep falling down carefully. Turn on walk as you need to.

This one you need to jump across. Heal up.

You will see a bridge. Ignore it, instead you are trying to jump down a little at a time to a white circular platform.

Be ready to fight this guy right away – you’ll be low health form the fall and will need to immediately put your back to a wall.

Then you can jump to the white circular platform.

Mount up and jump to the rock.

Unmount and start falling down the rock pathway again. I put walk on for the next jump then turned it off again.

You’ll have to fight a creature. As you fight this one, a second one will appear, so be prepared to keep your back to the wall and try and kill the first one quickly.

There will be a pack of Exoboars. I recommend to fight them to get them out of the way.

Here you will wait for the very slow circular elevator moving up and down. Mount up and wait.

You will want to jump up onto it when it reaches its lowest point, hast stopped, and is starting to come back up again. If you jump at its lowest stopped point, you will probably die, so wait until it starts coming back up again.

Once you land, wait until it reaches its highest point. It will stop for a short time when it reaches that point. Jump down onto the metal platform below once it stops. Don’t be impatient about this jump, just wait for the elevator to stop. You really need that extra height to make the distance of the jump.

Ahead, there will be the edge of this new platform, with a metal bridge on the right. The goal is to shimmy into the corner of this platform, jump up onto the half-circle rounded pipe, and then jump down onto the cross beams below. This is a very tricky jump. I started about in the very middle of the half-round pipe and do a running jump on my speeder and pray.

(Forgot to take a pic on the half-round pipe, its just ahead of my character in the picture above.)

You do not need to cross the whole metal bridge. Instead just cross one beam and jump down to the sand-colored rock cliff below.

This next part is very tricky. You want to jump and land on a piece of stone sticking out down below, so you can eventually get to to the metal bridge down below.

Do NOT try and slide down or you will hit an awkward patch that bounces you of. Get on your speeder and jump over the rest of the cliff onto the outcropping. Do not jump from the highest point or you will die.

Once you got onto that rock cropping, you can jump down onto the top of the metal bridge. Carefully cross on top of it.

From there you are home-free. Just carefully walk your way to the datacron whichever route you want! 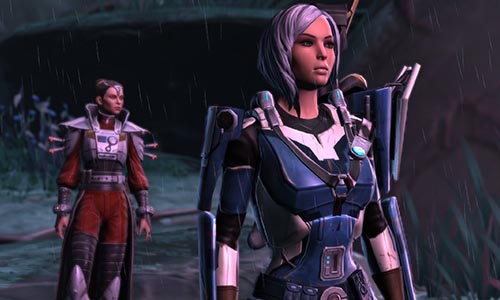