Although I mostly play Star Wars: The Old Republic, I’ve been playing Star Wars games since I was old enough to slam a CD in to the CD tray, and Star Wars: Squadrons has really caught my eye. Much like Star Wars: The Old Republic lets you live the fantasy of being a Jedi Knight or Bounty Hunter, Star Wars: Squadrons will let you explore your dreams of being a pilot in the Star Wars universe. This isn’t the first game that allows you to fly a Tie Fighter or X-wing, but there hasn’t been a fully immersive Star Wars flight simulator focused game made in a long time, and pilots across the galaxy started flipping out when the game was accidentally leaked in June 2020. Shortly after, the first cinematic trailer and gameplay trailer were released, and we now know a lot more about the game. In this video, I’m going to be going over what i’m looking forward to in the game, and comparing it to Galactic Starfighter, the player-vs-player free-flight ship mode available in Star Wars: The Old Republic. 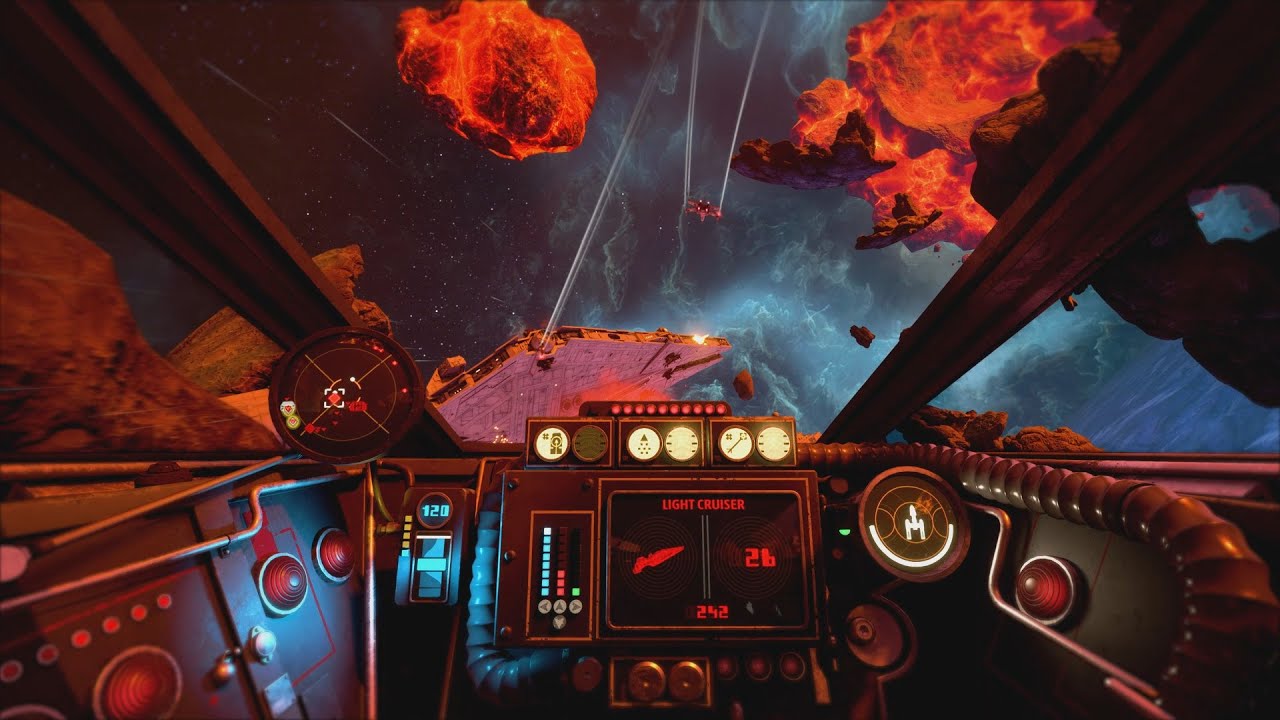 One of the biggest differences between the two is that Squadrons will have a solo story mode available, and it’s one of the things I’m most excited about trying out. Although Star Wars: The Old republic technically has a solo space fighting option available and it’s fairly fun and can be exciting, it’s on rails and doesn’t have much nuance to it. Later in the game’s life, Galactic Starfighter was introduced, which allows free-flight combat, and a fantastic amount of ship customization – but one of its biggest flaws is that there’s no way for players to ease themselves in to the complex and dizzying space flight with a solo mission mode. This lack of story or solo mode is one of the biggest hindrances to players trying out Galactic Starfighter, and I’m hoping that Squadrons will really be able to fill that void for players who want to dip their feet in to the spaceflight waters instead of having to jump directly in to player-vs-players battles like you do in Galactic Starfighter. As a huge bonus I didn’t expect, the story spans across both the New Republic and the Empire, where you’ll play as two combat pilots, flying for both sides.

In terms of gameplay, the biggest difference players will first pick up on is the first-player-view that’s available in Squadrons. In Galactic Starfighter, players play as the ship, from a third person view. In Squadrons, you’ll actually be playing as the pilot in the cockpit, and the controls won’t be as abstract as the metres and quickbars scattered around the edges of the screen in Galactic Starfighter. I think this is going to allow players to really immerse themselves in Squadrons, especially with the different cockpits available for the different ships, with a stark difference between what you’ll see in an Imperial ship versus a Republic one. Although many of the types of feedback are the same, like power, speed, ship status, weapons charge, and a map, in Squadrons, this will be up-front and in your face. In addition, although I don’t actually have an complaints about Galactic Starfighter’s graphics while running them on the higher end, so far the gameplay we’ve seen from Squadrons has been really beautiful. Between that and the claustrophobic cockpit, this is definitely a game i’d like to try out in VR, and it definitely feels like the developers wanted immersion to be key. One thing you won’t see in Squadrons is the leading reticule – this is the small circle you’ll see appearing in front of ships in Galactic Starfighter which indicates where you should be aiming to hit your enemy ship, rather than aiming directly at where the enemy ship is currently in the sky. This means players are going to have to get better at guessing “where” ships will be when taking aim, and you won’t be able to rely on the aiming reticule. The goal of this difference was to encourage players to immerse themselves and look at the ships and stay in the environment, and focus less on the UI. Squadrons will also have native support for peripherals including hands-on throttle and stick and traditional joysticks, at least for PC, while Galactic Starfighter is part of a game that’s meant to be controlled with only a mouse and keyboard.

Now let’s talk about ships. Squadrons actually seems to follow a similar pattern as the four ships available in Star Wars: The Old republic, and much like in Galactic Starfighter the ships have a Republic-Empire counterpart. There’s the familiar flexible and versatile ship known as the fighter and the fast and highly maneuverable interceptor which is known as a Scout in Galactic Starfighter. The last two ships are when things get interesting – there’s also support ships who can keep allies safe and stocked up, and Bombers are the heavy hitters who deal devastating damage. In Galactic Starfighter, their equivalents might be the Bomber who deploys repair drones and mines to help defend areas, and the Gunship, who can shoot out large bursts of damage. Much like Galactic Starfighter, your ships in Squadrons seem to be very versatile when it comes to switching up your components, including different types of cannons, shields, and missiles. Much like in Starfighter, you’ll be able to switch your power between engines, weapons and shields, but it seems like this is a lot more nuanced in Squadrons, and putting max power in to one will give you some interesting abilities, like being able to go super speed if you max engines, beyond the engine speed boosting available in Starfighter. One really interesting change about the ships is that although each ship has a Republic-Imperial counterpart, they are not mirrors of each other like they are in Galactic Starfighter. The most noticeable one is that Tie Fighters don’t have shields in Star Wars lore, so the developers decided to honor that difference between the Fighters and find a way to alternatively balance them with their different health pools, passives, and abilities. For those who grew up loving the ships in the movies, you’ll be pleased to find out that the ships available as part of the New republic are the x-wing, Y-wing, A-wing and U-wing, and the Imperial ships will be the TIE fighter, the TIE bomber, the TIE interceptor and the TIE reaper.

Apart from the solo story mode, Squadrons will also have multiplayer modes. The first shown in the gameplay trailer were dogfights, an all-out 5-vs-5 battle. In Galactic Starfighter, this mode would be known as Deathmatch, where there are no objectives except to defeat the other team. One of the biggest differences you’ll see is the team size – in Galactic Starfighter, you can have up to 12 vs 12 deathmatch teams. The other mode unveiled for Squadrons is Fleet Battles, a multi-stage conflict mode that you can play solo with an AI or in multiplayer, once again with a squadron of five. Although Fleet Battles are similar to Galactic Starfighter’s Dominion mode in that there are objectives to be won, Fleet Battles seem to be more involved and multi-step. [[lady talking]] This is where Squadrons is going to shine for the scale of impressiveness of battles – being able to actually fight massive flagship battles is something players in Star Wars: The Old Republic have been asking for ever since they were introduced to the game.

One noticeable difference between the two is their price and ongoing states. Galactic Starfighter is 100% free and is a subsystems of the greater game of Star Wars: the Old Republic, where players might subscribe to unlock other features of the game like expansions, which do not affect or exist in the mostly stand-alone Galactic Starfighter. Galactic Starfighter was also originally planned to be a part of the game that was constantly updated and balanced, and although the mode was never as popular as planned and received few updates over the years, new maps were added over time and a large balancing update was added over 3 years after Galactic Starfighter’s launch. Although Star Wars: The Old republic has many, many cosmetic micro-transactions, and you can purchase the expansions through subscribing, Galactic Starfighter’s components can only be earned by playing and there are only a few cosmetic micro transaction unlocks. In Starfighter, you can also purchase additional ships, but their equivalents can also be earned through playing and a recent update has made it easier than ever to unlock additional ships and upgrades without micro-transactions. Star Wars Squadrons is taking the opposite approach – although the game has a multiplayer mode, the game is not being built around being a live-service support by micro-transactions. The game will cost around $40, and the Creative Director of the game has stated that their goal was to include everything in the game with the purchase price. One thing that they do share is that as you play, you unlock in-game currencies that you can use to buy different types of weapons and upgrades for your ship that you can use to create different loadouts.

Star Wars: Squadrons is set to come out October 2, 2020. In the mean time, if you’re looking to try out Galactic Starfighter in Star Wars: The Old Republic for free, I’ll be making a series of videos about how to jump in to Galactic Starfighter in 2020, especially focused on players who may have never set foot in to a flight simulator, or who have tried Starfighter and found it to be one of the most challenging modes of the game, especially when it comes to greeting asteroids head-on. I’m looking forward to seeing more about Squadrons and I’ll see you in the skies on its release!

If you want to show your support for this channel, or get notified when those Galactic Starfighter videos go live, subscribe to this channel! Thanks to the EA Game Changers program for sending me the high quality version of the new gameplay footage for Star Wars: Squadrons so I didn’t have to scrounge it from the internet like I do Old Republic trailers.