Changes are coming to gearing up at level 80 in SWTOR in 7.1! 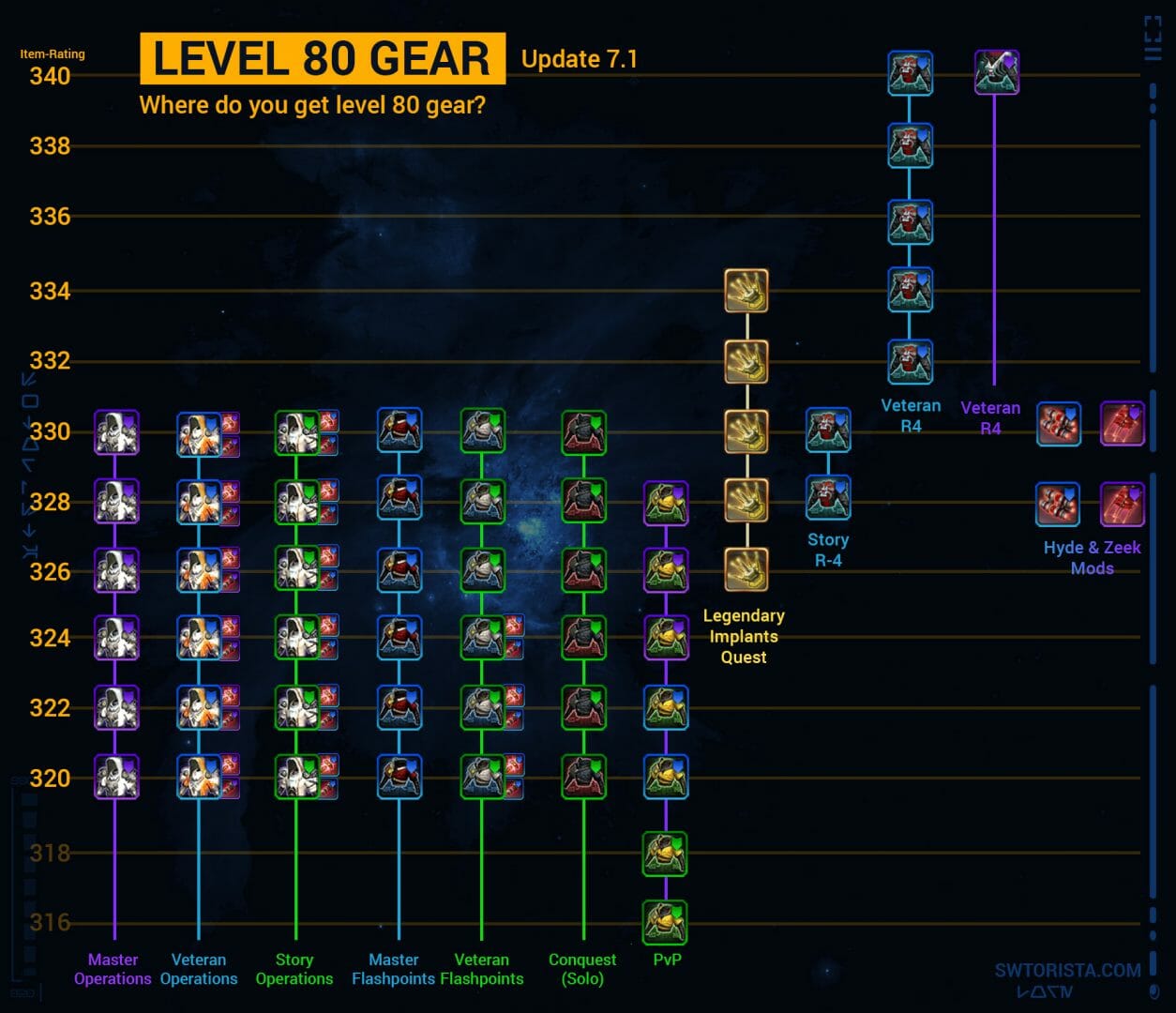 Now that 7.1 PTS is live, I have some additional info to share with you from the Design team regarding gearing in Operations, specifically in The R-4 Anomaly.

On PTS you’ll notice that gearing works differently in R4 than other Operations. There are 2 goals we’ve focused on with R4 gear.

Progression as a Group
Operations are difficult content requiring coordinated groups to progress. Progressing can be easier if the group has control over which members are receiving their upgrades. We want to allow groups to have some control over their power progression, and have built this into R4’s gearing.

Progression on every Kill
It isn’t fun to kill a boss and make no progress towards your goals, even if your team is progressing towards group goals. R4 will have a secondary method of progression allowing every player to gain power as their group conquers each boss.

How these take shape in R4

Story Mode
In Story Mode, each boss will reward the operation group with story mode tokens, 1 per player. These tokens can be brought to a vendor and exchanged for Prototype gear at item rating 328. Players can use additional story mode tokens and credits to upgrade their gear pieces to a maximum item rating of 330. Cosmetic versions of the gear will be available on the vendor for players who have finished upgrading.

Bosses will drop a token unique to them, for now let’s call it the R4 Boss 1 Token. This Boss Token can be exchanged on a vendor for a piece of Artifact gear at item rating 340. Only 2 tokens will drop per boss and they are tradeable amongst the operations group.
Each boss token can only be used to purchase certain gear pieces, defeat the entire operation to obtain all gear!

Here is the list of Boss Tokens and the gear slots they purchase:

Note: Implants will not be purchasable at item rating 340 as players are encouraged to focus on their Legendary Implants.

Each boss on defeat will reward the entire operation group 1 Veteran Token each. These tokens can be brought to a vendor and exchanged for Prototype gear at item rating 332. Players can use additional story mode tokens and credits to upgrade their gear pieces to a maximum item rating of 340. Cosmetic versions of the R4 gear will be available on the vendor for players who have finished upgrading.

(Story Tokens do not seem to be used to upgrade Hazardous gear as the post mentions on the actual live patch. – Swtorista)

We look forward to your feedback on this gearing system with the 7.1 PTS! – Jackie

I’m back to talk about the changes to gearing and progression players can expect with the 7.1 Update. We’ve already posted about the gear for the upcoming Operation: The R4 Anomaly, so this post will hit on the rest of the changes!

We’ll also be adjusting the stat distribution of Artifact gear for tanks. Tanks will see higher values for Endurance on gear.

Increasing the Power Ceiling
With 7.1 we’ll be implementing our first power increase, allowing players to obtain even stronger gear. Here are the new maximum item ratings players can obtain:

Moddable Gear
7.1 will include mods available at Item Ratings 328 and 330! To begin the process of unlocking the new mods, players should seek out Hyde and Zeek near the modification vendors in the Supplies section of the Fleet. Hyde and Zeek will require players to obtain and deconstruct items at Item Rating 328 and 330 to unlock purchasable mods at those Item Ratings respectively. Combined with Power Ceiling Increase, all players will have a chance to earn this moddable gear! Missions will be offered for Prototype and Artifact gear separately, so gather the best gear to unlock the best mods!

Planetary Vanity Gear
The addition of Combat Styles brought along changes to the gear players earn while leveling. With 7.1 we are adding vanity versions of the leveling gear to Planetary Vendors so players can pick and choose the looks for themselves and their companions, regardless of Origin Story or Combat Style.

Dyeable Versions of Thyrsian Gear
PvP players will notice Thyrsian Fitted Gear available for sale from the PvP Gear Vendor on the Fleet which have unlocked dye and modification slots. These items can be purchased using WZ-1 Accelerants and credits.

We hope you enjoy these updates and look forward to your feedback. See you on the Fleet! – Bryant

In another post, it was noted that there would be some changes to gear for lower-level planets or content.

In this phase of PTS, there are a couple of special notes players should know:

Moddable gear seems to be a useful way to gear up alts or fill gaps in your Rakata 330 gearing while getting ready to gear through R4.

In addition to all this, there are some changes to Tacticals coming