The Imperial Guild Flagship acts as a base of operations for Imperial SWTOR guilds, and can be decorated like a stronghold. Read about how to get your own flagship on a separate guide!

This domineering guild flagship is initially parked near the Imperial fleet, but can be moved throughout the galaxy. It has room enough for a 2,400 crew members, 7,300 troops, 95 starfighters, 32 bombers, 35 shuttles, turbolasers, quad laser cannons, ion cannons, proton torpedos, and concussion missile launchers. It is greater than 800 metres long but it is slower and less agile than its Republic counterpart.

Your initial unlock gets you a large bridge, a small entry room, an escape pod room, a large hallway room, a small connection room, an officers lounge with two large rooms up an elevator, and access to the tiny rooms that precede each other floor up the elevator. There are four other floors: the command deck, the crew deck, the hangars and the engineering deck.

The Republic flagship is mostly dark grey, black an bright red. It feels very Imperial in its design and color scheme.

Guild Flagships can not be unlocked with Cartel Coins, to prevent customer service having to get involved in the case of guild disbandment or loss of a flagship.

Encryptions can be earned by completing personal conquests, by completing your personal conquest and placing on the guild conquest leaderboard, dropped from Conquest Commanders, and bought for one Dark Project (crafted item) each in the Strongholds section of the fleet. They can also be “crafted” – you can trade in one Dark Project for one Encryption.

Frameworks can be dropped from named Conquest Commanders, strong enemies spread around the galaxy. They can also be purchased with 50 matching Encryptions in the Strongholds section of the fleet.

Make sure your credits and Frameworks are in the first tab of your guild bank (not your inventory). You must also have access to withdraw the amount of credits needed from the guild bank before you can unlock flagship rooms.

Part of the initial unlock for 50 mill 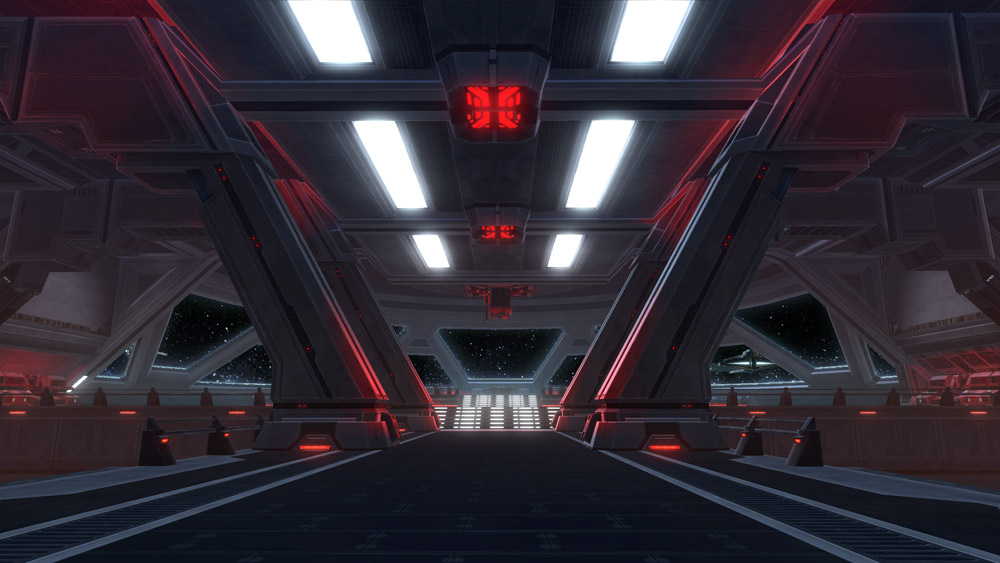 Part of the initial unlock for 50 mill – this is the area you load into first, a room behind it with the main elevator, the escape pod area, and a large hallway to the Officer’s Quarters. You also get four ‘elevator landing’ rooms for each of the unlockable decks. 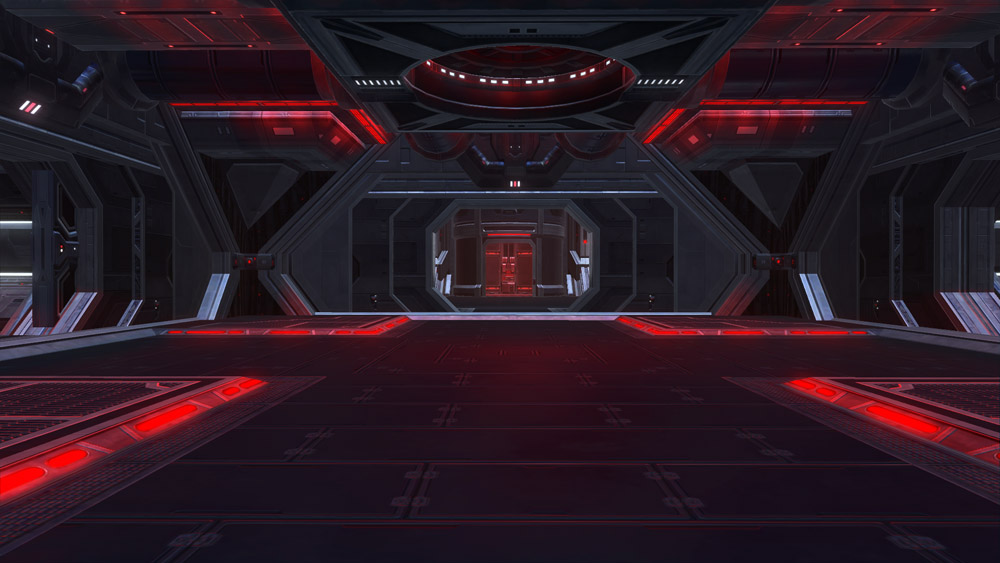 Part of the initial unlock for 50 mill – up an elevator off the main deck, there is small entry room that leads to a large room with two windows that has a unique shape not seen anywhere else in the flagship. 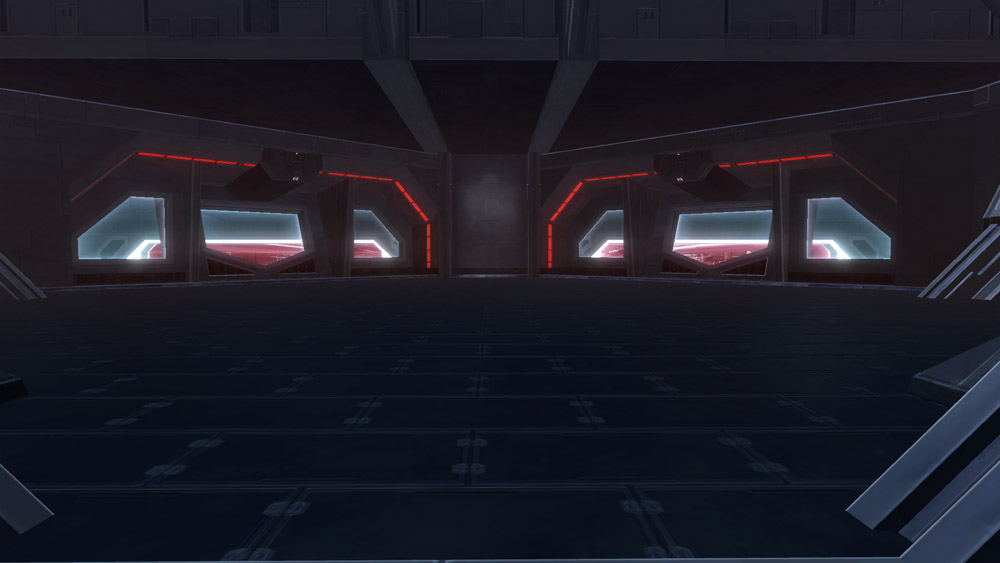 The command deck quad is a large circular room with a raised platform in the center. It opens up to the three command deck rooms. 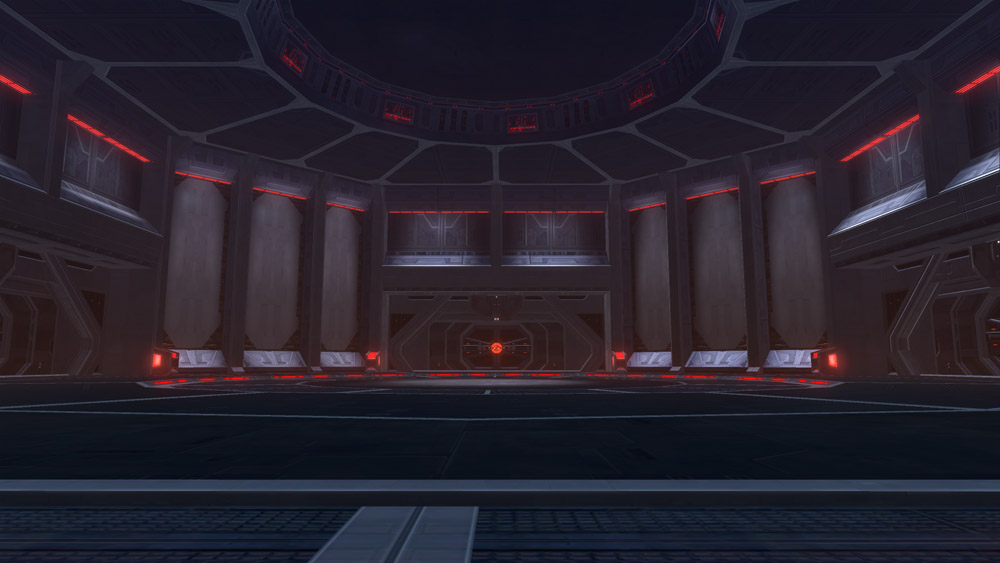 The command deck rooms on the sides are very large, while the one across from the entrance is fairly small (same size as the Crew Deck rooms). All three have large windows. 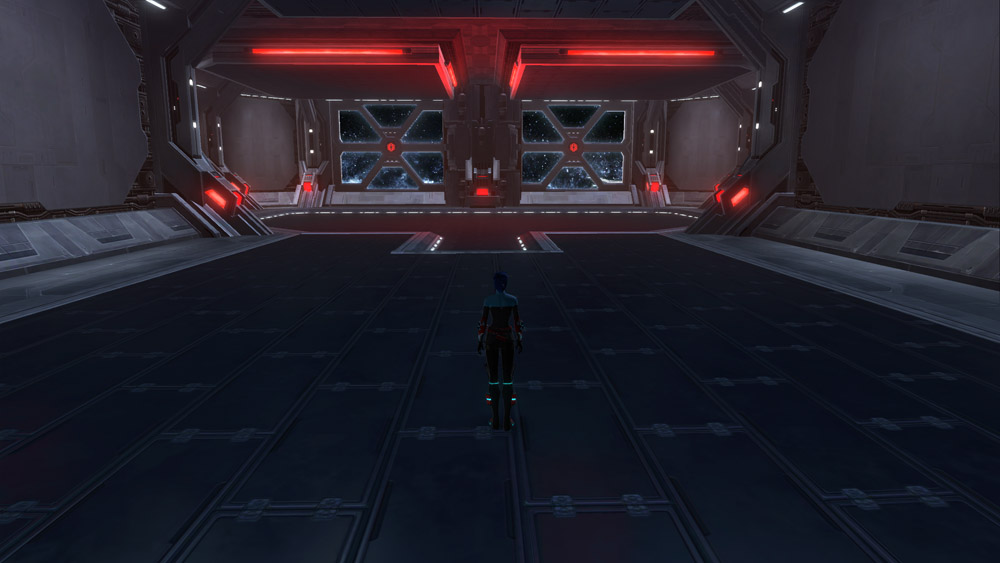 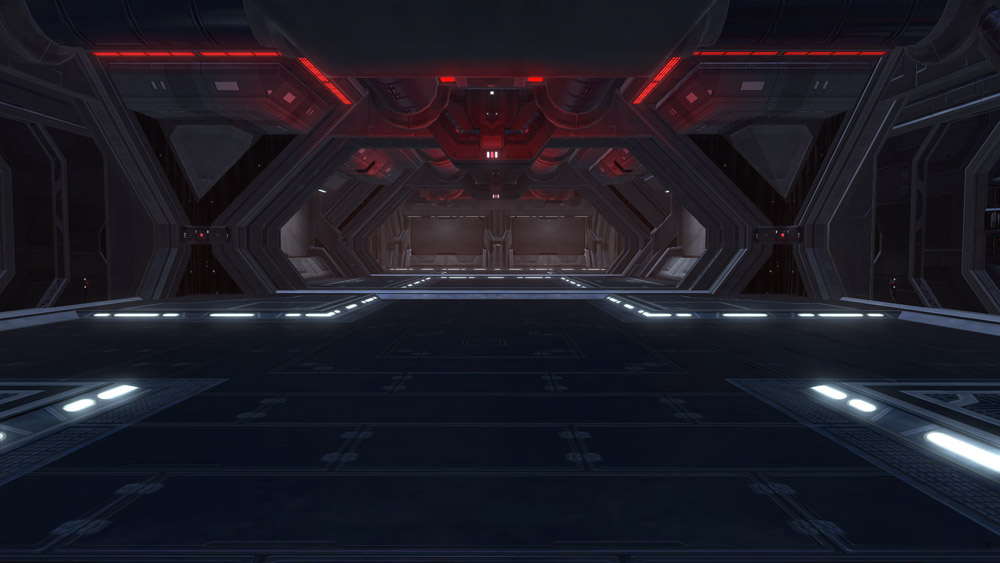 There is a total of six crew deck rooms to unlock – on the Imperial side, some have windows and some do not. 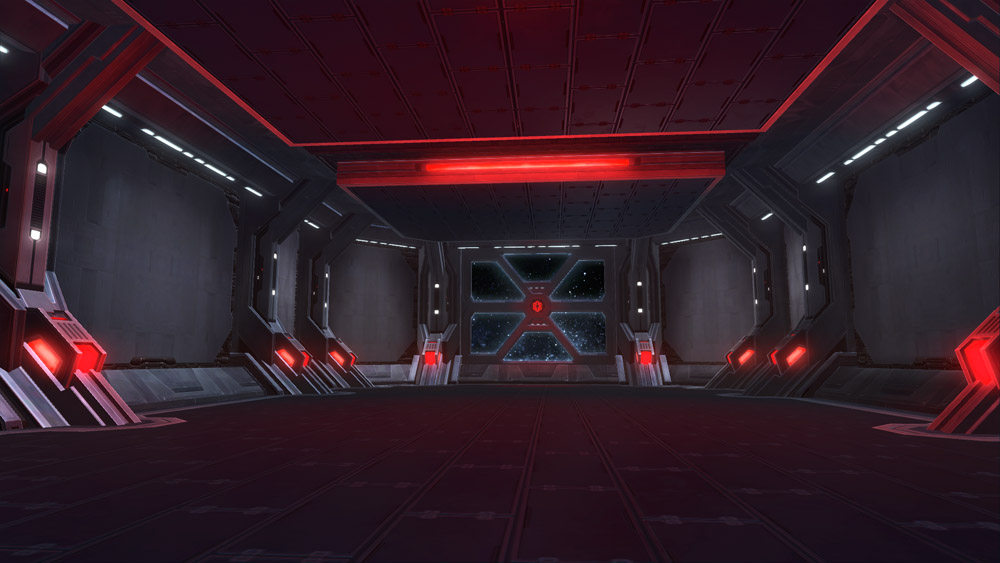 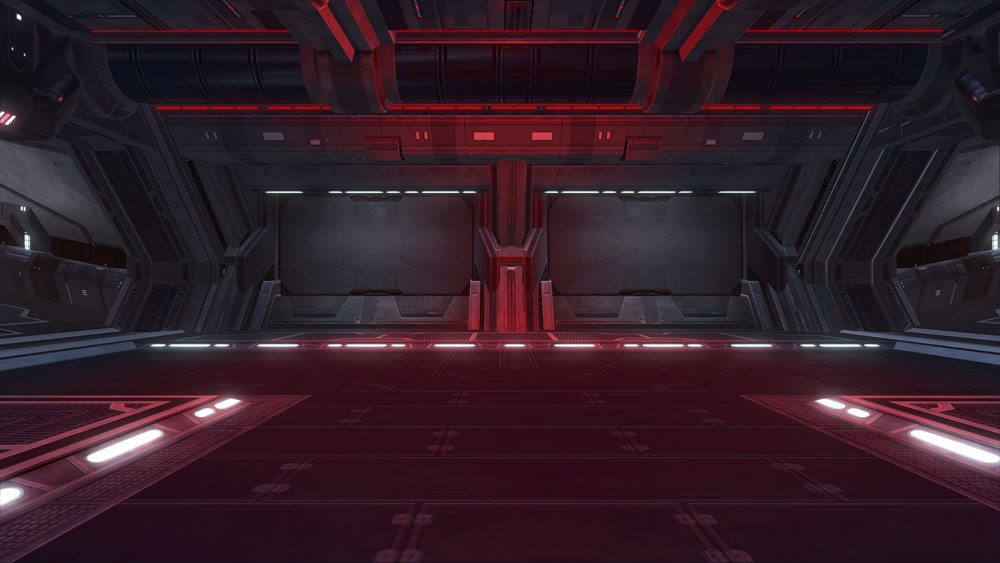 A extremely large room with lots of hooks. The hangars give you a lot of extra decorations too. The ship hook can not be changed to another type of hook set. There are two hangars you can unlock. 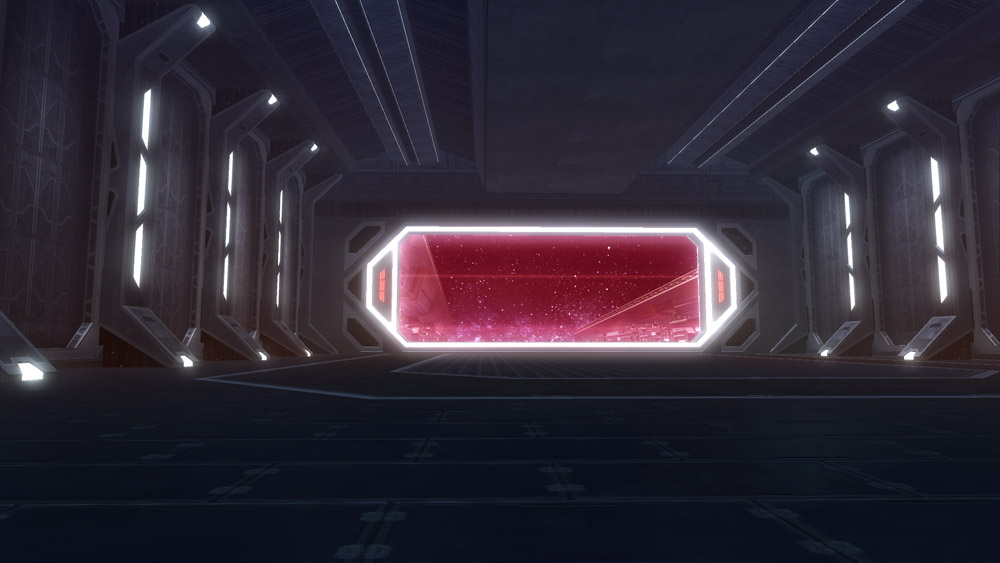 You can see the engine room when you look out the closed window, but can not get inside it. Very cool, the engine spins and sparks. The room is small though for the framework unlock cost. 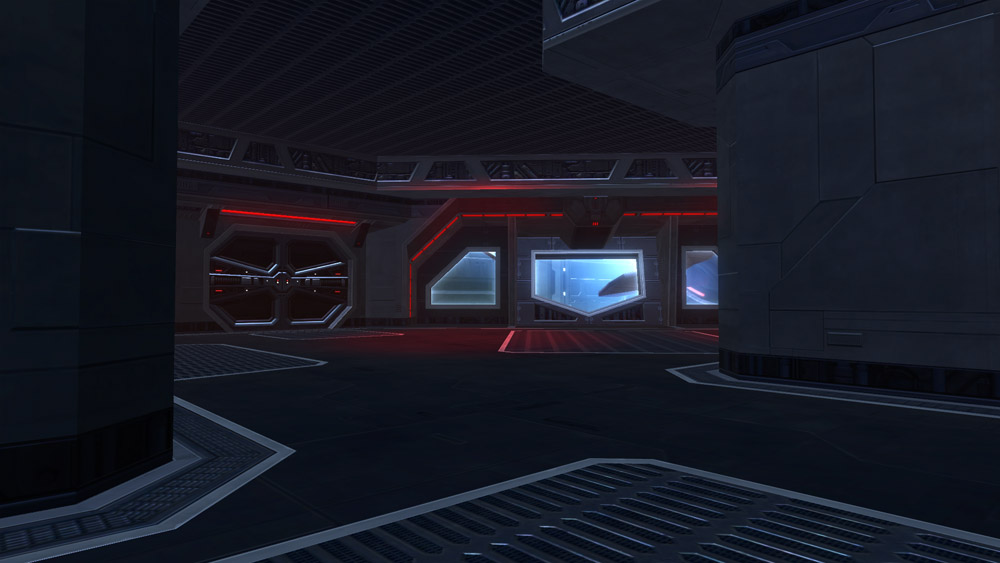 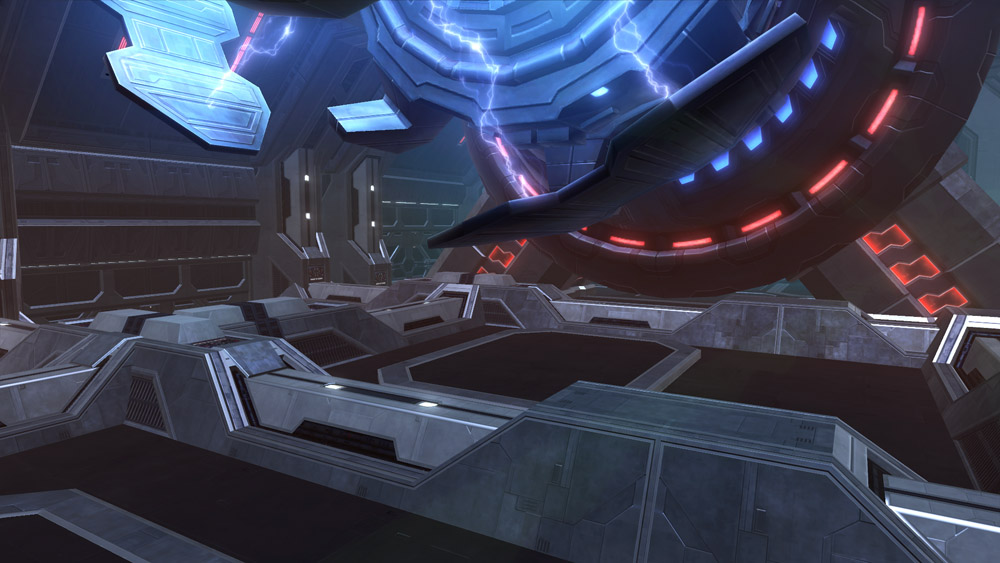 Peeking out the Engine Room window