A guild flagship is a decoratable area unique to your guild, which will allow you to participate more fully in conquests in SWTOR. It requires a lot of resources to set up, including 50 million credits. This guide will explain how!

You need yourself plus three other people in a group together to create a guild. Head the the Galactic Trade Market part of the fleet, and look for the purple key symbol. Speak to the NPC there to start your guild. The other members need to be in your group, but not present. You may remove them from your guild afterwards.

You must have a guild bank to buy a guild flagship! To purchase a guild bank, you must first have 12 unique characters in your guild (these can be your alts, have a friend invite them if you are trying to make a 1-man guild and remove them afterwards). To buy it, access the purple bank near the guild NPC.

Deposit at least 50,000,000 (50 million) credits into your guild bank (cost of a guild flagship). You must have these credits in the guild bank, not your inventory!

In the Strongholds & Crew Skills part of the fleet, go to the flagship terminal (it is near the other stronghold terminals, but in a different room). On the Purchase tab, press the Purchase button. 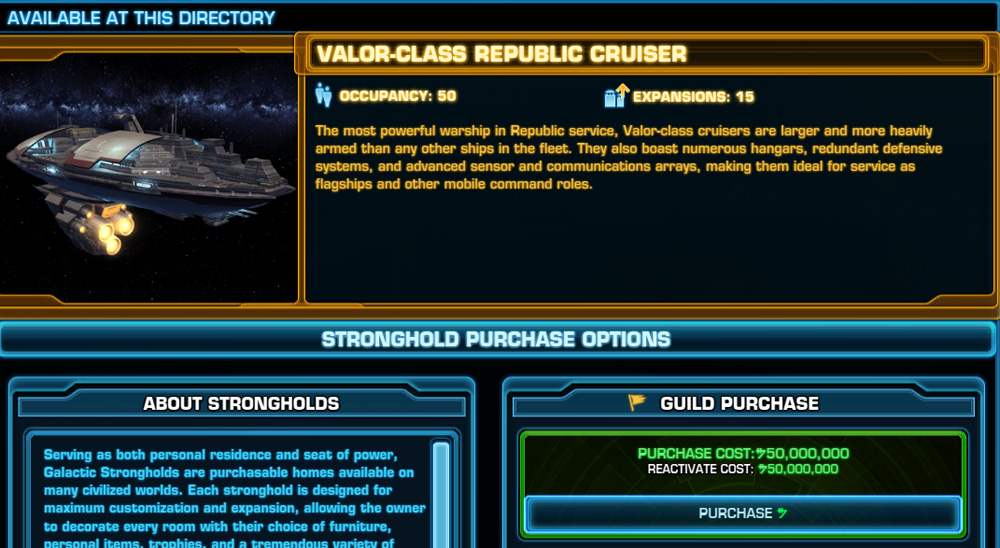 Buying a flagship costs 50,000,00 credits. You must have placed these credits in your guild bank first.

To travel to your purchased flagship, open the strongholds panel. Click the guild tab, then click the Travel button. This will take you to your flagship.

You may save this step until later, if you want to poll your guild or think about it first. Open the strongholds panel, and choose the guild tab. There will be a small rename button on the top right. Be careful, you can only rename your flagship once! If you do not rename it, it will simply be called “Flagship: <Guild Name>”.