Tech Fragments are a type of currency in Star Wars: The Old Republic which come from various quests, and are used to purchase high-level gear pieces, crafting materials, and cosmetic items.

What can you purchase with Tech Fragments?

You can purchase these things with your Tech Fragments:

Where do Tech Fragments come from?

Conquesting is an extremely easy way to earn tech frags just by playing the game. Every week, you’ll have a personal conquest point goal to meet, and you can get conquest points by doing the objectives listed on the Conquest panel, which is tab at the top of the normal missions panel. Conquests reset weekly, so you have a limited time to meet your personal goal and earn the rewards each week. 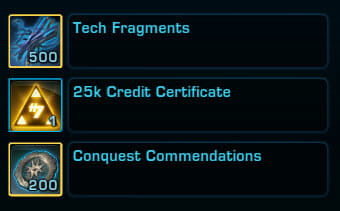 Solo: If you are playing outside of a guild, you can get 500 Tech Fragments just for completing your personal conquest goal of 100,000 points on your character, and you can complete conquest solo on as many of your characters as you want. You’ll also get 200 Conquest Commendations, which you can exchange for even more Tech Fragments.

Guild: If you conquest with a guild, and your guild reaches their conquest goal, you’ll get an additional 300-500 Tech Fragments for every character you reach your personal conquest goal on.

Galactic Starfigher and PvP are both also great choices for earning tech frags, but there is a lot more variability in time compared to the other methods as it depends how fast the queue is while you’re playing and how often you win.

If you like normal PvP, you can earn 1,500 Tech Fragments from the PvP weekly to run 12 matches, with wins counting triple

If you like solo content better, each Heroic or Daily quest will grant you 30 Tech Fragments. If you like running solo, an efficient way to play if you have multiple characters is to run quests on your first character until you hit your Conquest goal, then log off them and log into another character, and continue running quests on your second character until they hit conquest, spreading out your conquest points so you can double dip in earning Tech Fragmants!