Amplifiers are a new type of boost to your gear that was introduced to Star Wars: The Old Republic in the Onslaught expansion. Amplifiers have a chance of being included on any type of new gear you pick up, including armor shells or unmodifiable armor, armorings, mods, hilts and barrels, so pretty much everything except mainhands, offhands, enhancements and tactical items. Amplifiers usually start showing up on high-level gear pieces and on high-level purple and gold modifications. The amplifier a piece of gear starts with is random, and may or may not be useful to you.

UPDATE 2022: With update 7.0, Amplifiers no longer exist, and have been removed from all gear pieces.

Old video on how it worked: 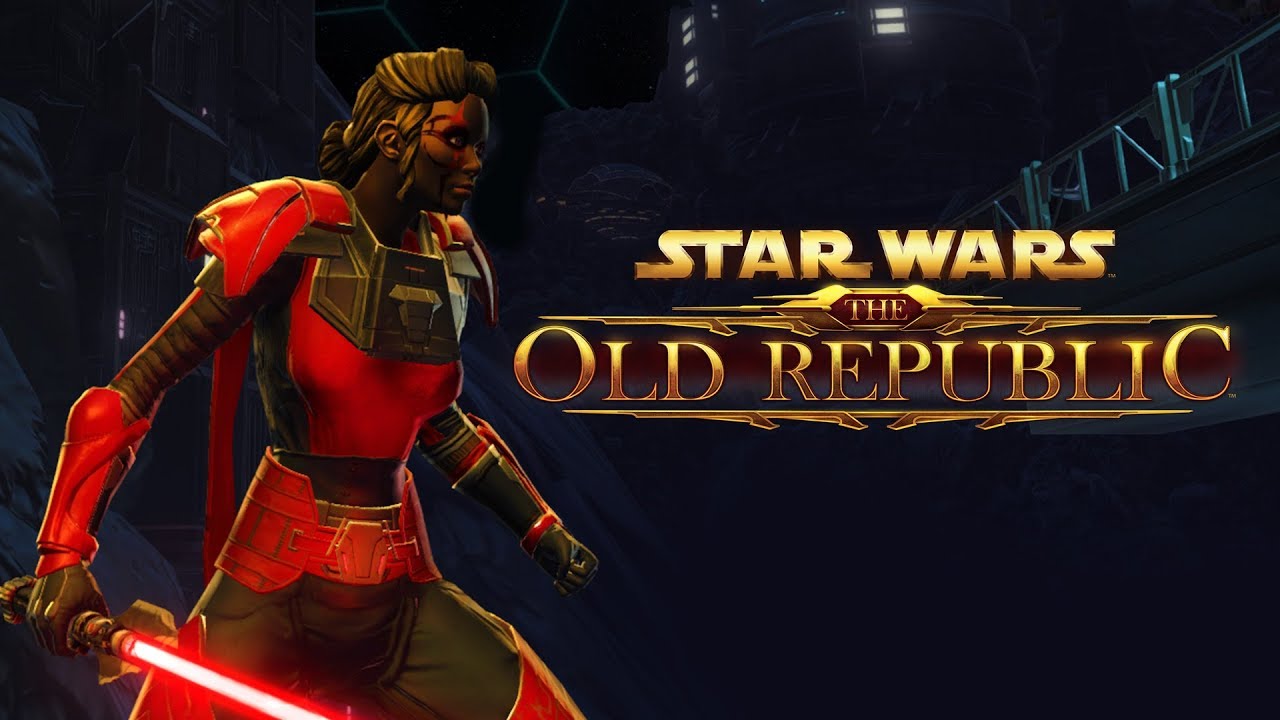 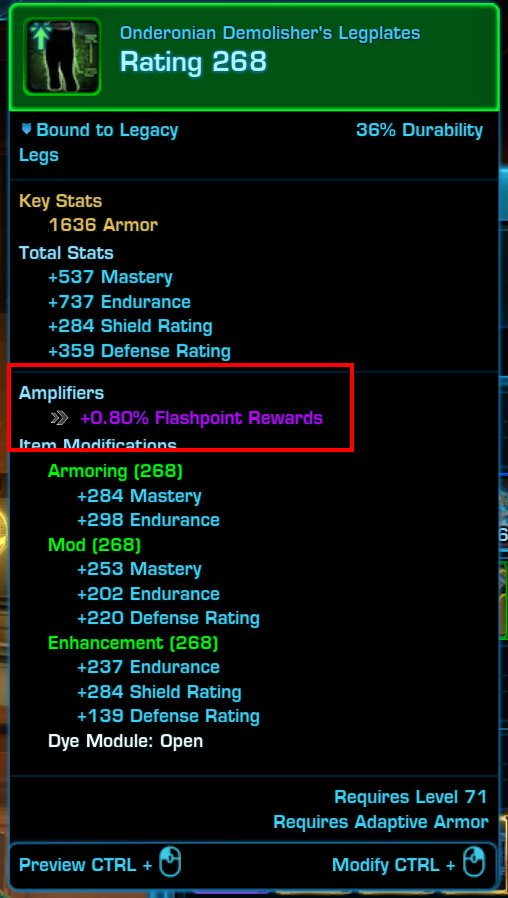 Doesn’t have an amplifier: 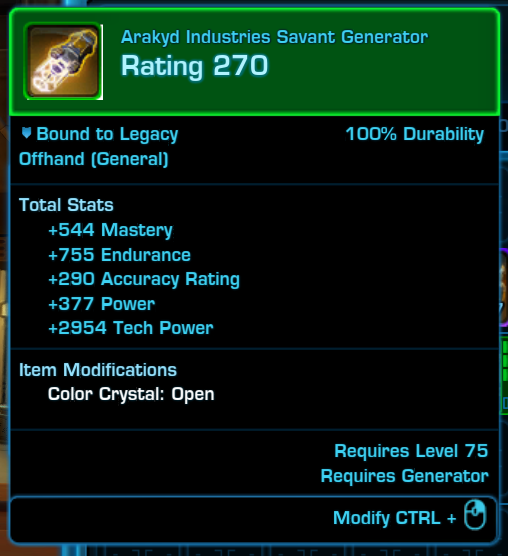 Amplifiers can affect a wide range of stats, and not just the traditional stats that your gear pieces use. Amplifiers can affect anything from your crew skill stats to interesting things like your damage dealt by Force abilities. The exact percentage boost is also randomized, so you have a chance of getting an amplifier with a really low boost, all the way to the best boost that type of amplifier has to offer. The easiest way to see how good the percentage boost you got is by the color of your amplifier – white means it’s really low, green means it’s pretty low, blue means it’s ok, purple means it’s pretty good, and a gold border means it’s the best percentage boost you can get from that type of amplifier. Each amplifier has its own best percentage – for example, one amplifiers gold value might be 1% while another’s is 1.5%, so trust the color values to find out if you’ve gotten the best amplifier of that type available.

Unlike the new tactical items, amplifiers are not bound to any class, though some will be more useful for some classes or roles than others.

Once you get your hands on a piece of gear with an amplifier, if you don’t like its stats, you can pay credits to recalibrate it to get a different amplifier.

To recalibrate, CTRL+RIGHT CLICK your piece of equipment, then click the amplifier button below the part you want to change, and click the RECALIBRATE button. You’ll then get to choose between two randomized amplifiers to replace your existing one.

You can hover your mouse over them to find out what they do before choosing one to update. If you were hoping for the same amplifier you had before but just a higher percentage, too bad, you get two random ones each time you recalibrate. You can recalibrate your amplifiers as many times as you want, but every time your recalibrate an amplifier, the credit cost goes up. If you like your current amplifier more than the new ones you rolled, you can click the X button to close the window and keep your current amplifier – or you can recalibrate again to get a new set of amplifiers to choose from. If you want to see what options are available before recalibrating, you can click the Potential Amplifiers button which will show you a list of what might show up when you recalibrate. So in short, if there’s a specific amplifier you want from the Potential Amplifiers list for your amplifier, you would just keep recalibrating until you get the one you want. If you want to save credits, simply recalibrate a few times until you get an option you like. For example, as a tank, I knew I wanted an amplifier that helped keep me alive, so I recalibrated until I got a gold-bordered defensive amplifier. When I start trying to get the best stats in the game, I’ll probably go back and re-calibrate to try and get my ideal amplifier.

Different types of amplifiers are bound to different pieces of gear. For example, Armourings, hilts, barrels and non-moddable armor pieces have primary amplifiers which focus on combat stats. Mods have secondary amplifiers that give quality of life improvements like crafting and gathering success boosts or even speeder movement speed boosts. Armor shells, relics, implants and earpieces have tertiary non-combat oriented boosts like xp boosts or crafting time efficiency boosts. Enhancements do not have amplifiers attached to them.

You can also see all your amplifiers at once on your character sheet, and modify them from there.

There is no way to minimize the amplifiers list on the character sheet.

If you happen to have an amplifier isn’t white, the “quality lock” button will appear on the bottom left of the amplifier screen.

Enabling the Quality Lock button allows you to keep your amplifier the same color or better when you re-roll it, in return for paying a much higher re-roll price.

This button is likely meant for players who are chasing the best gold amplifiers in the game, but is also available for lower-tier amplifiers – so if your piece only started off at green, you can lock in the quality to not worry about getting a white re-roll, and hope to get a blue or better.

At the time of writing this, re-rerolling a gold amplifier on my character normally costs 20,000 credits, for a completely random reroll, or costs 403,000 credits if I use the quality lock option and lock in its gold status for the re-roll. If I do not get the amplifer I wanted even with the quality lock, and want to re-roll it again, the cost will increase to 420,000 credits, and go up each time I re-roll. Every Tuesday the amplifier costs reset, so I could wait until Tuesday and only pay the 402,000 price to re-roll again and save credits.

In this expansion, set bonuses are tied to armor shells and give your character an extra combat boost. Because set bonuses are tied to the empty armor shell, most players recommend that you not worry about your amplifiers until you’ve gotten the best armor shells in the game, which are the gold-bordered ones with a set bonus attached, because until then you will be switching out your gear often as you get pieces with a better item-rating. You can get these set bonus shells by running content and getting random rewards, or by buying them with the Tech Fragment currency in the supplies section of the fleet.

When it comes to your other pieces including your earpiece, relics, implants, mods, enhancements, hilts and barrels, you’ll likely want to wait until you’ve obtained the rare best-in-slot pieces before you go chasing the rarest amplifiers.

The lists below are from the Potential Amplifiers list ingame.

These amplifers are on the list provided by the developers, but it is unclear if they are available ingame as they do not show up on the combat-oriented Amplifiers lists. 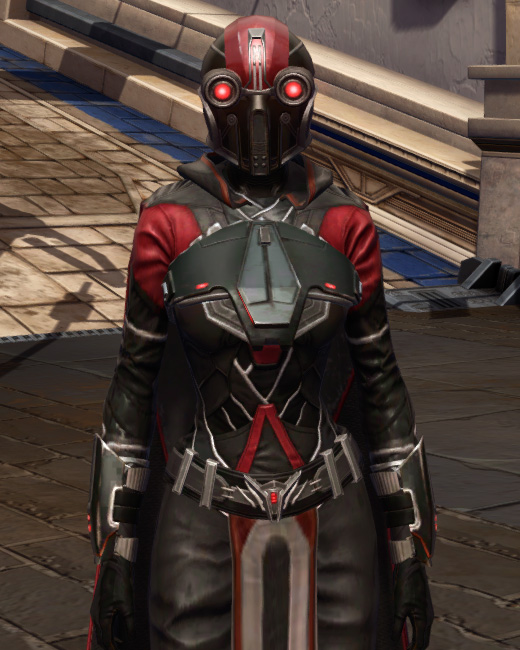 Normally, armor shells have tertiary boosts that do not affect combat. however, there is a special type of of armor shell called the Amplified Champion’s set which instead has the same amplifiers as an armoring, hilt or barrel, so you can boost your stats even more than normal, though the highest boosts are not available (see the chart below). The trade-off is that this set has no actual set bonus ability like normal set bonus pieces.

The Amplified Champion’s armor set is only available from Conquest Equipment Crates.