Star Wars: The Old Republic is now available on Steam! 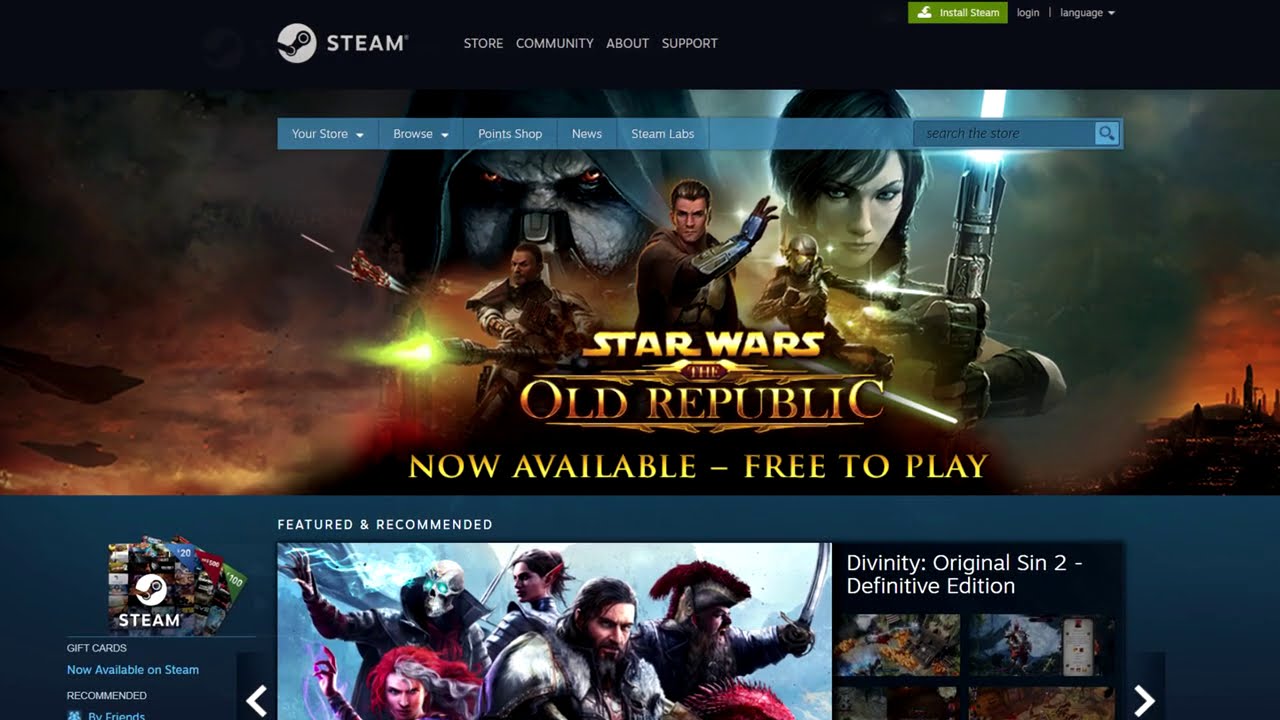 Why is SWTOR on Steam?

Although players can easily download Star Wars: The Old Republic from SWTOR.com, there are some nice benefits of SWTOR being available on Steam. 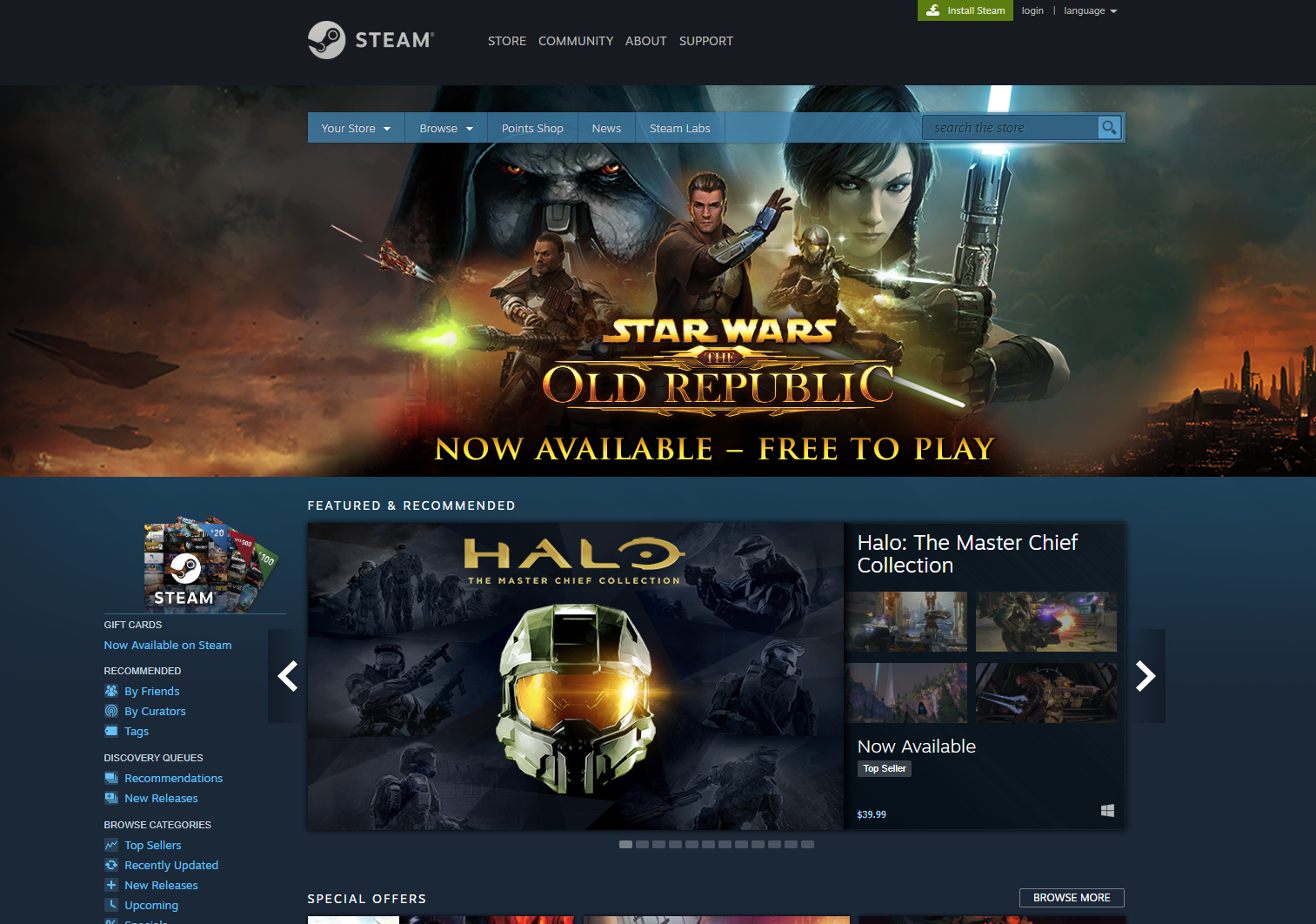 Playing and Downloading on Steam vs SWTOR.com

Once you installl the game, either through SWTOR.com with the normal launcher or though the special Steam SWTOR launcher, you will be playing the same game as everyone else, and you can log in to either launcher with your SWTOR log in details. All your progress is saved to SWTOR’s servers, so it does not matter if you log in through Steam or with the normal launcher. The only benefit to launcher through Steam is that you get all the Steam-related perks – there are no actual benefits ingame. If you are a plyer who has never used Steam before, you do not need to start using Steam. The Steam launcher looks exactly the same as the normal launcher and the only difference is that the Steam launcher does not use Bitraider to install the game. Bitraider is the technology that allows you to download a small percentage of the game and start playing right away, instead of having to wait until the entire download is complete.

If you already have SWTOR installed, when you launch SWTOR through Steam, it will attempt to download the game from scratch in to Steam’s game folders. 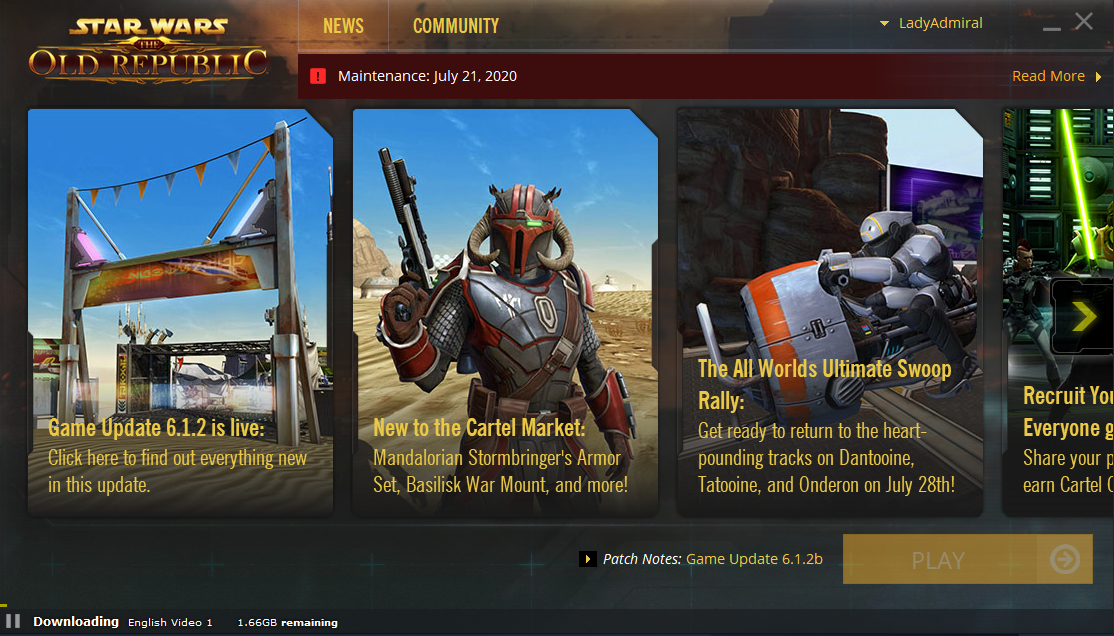 Here are the steps to copy your files over, written by player Teddy, that are mainly for non-bitraider players:

If you were a non-bitraider player, that should have worked well, and it will only have a few small files to download with the Steam launcher.

If you are a normal player, and have the bitraider version, you will notice some of these files don’t exist. You can try copying over “Assets” and “Movies”. As far as I can tell the Steam launcher respects that Movies are already installed, but can’t recognize “Assets” and tries to download the rest of the game.

If you have the Public Test Server installed, you’ll run into an issue where those .version files mentioned are named slightly different, with the word “test” in them. I was unable to do the “copy over” trick with these “test” files. The Steam Launcher recognized the Movies folder, but then started to download the big Asssets folder.

Once the game is up and running, you can manually delete the files from your previous SWTOR folder and keep the ones in your Steam folder. If you do a proper “uninstall” it may delete a few of your settings like User Interfaces you have saved so you are better off selecting and deleting the files manually.

Your User Interfaces and other settings are saved in a totally different folder and they will be preserved if you install through Steam or if you copy+paste your files over!! Nice!

Prices to subscribe on Steam are the same as offered on SWTOR.com, but they are one-time purchases (they do not charge you again the next month like the re-occuring prices on SWTOR.com).

IT DOES NOT MATTER HOW YOU SUBSCRIBE. Subscription benefits are the same whether you subscribe through SWTOR, Steam, Origin, or a gift card.

To actually apply your Steam subscription, you will need to launch SWTOR through Steam, then log in to the SWTOR account you want to apply it to. This will automatically link your SWTOR account and steam account. You will NOT receive a code unlike purchasing on Amazon or Origin. 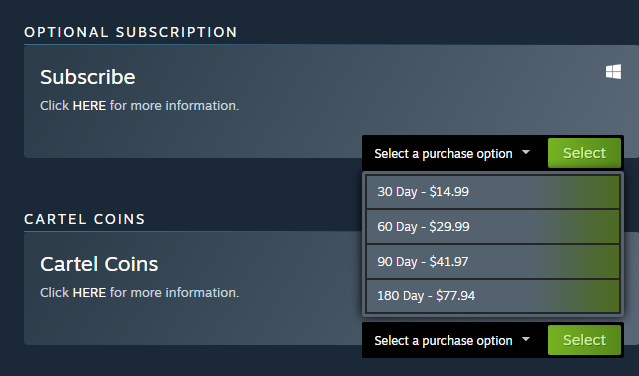 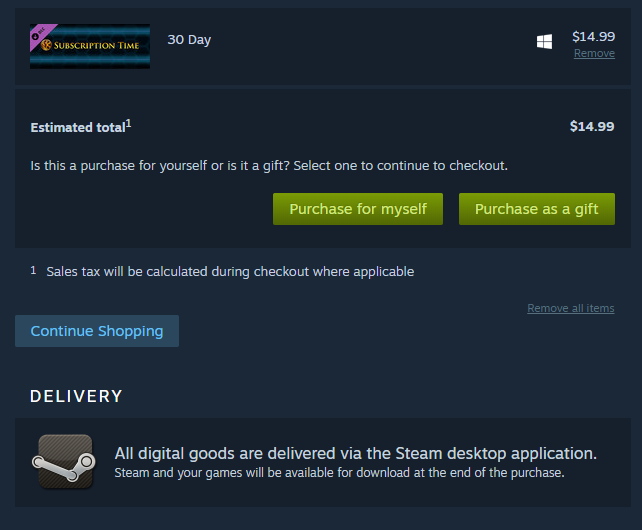 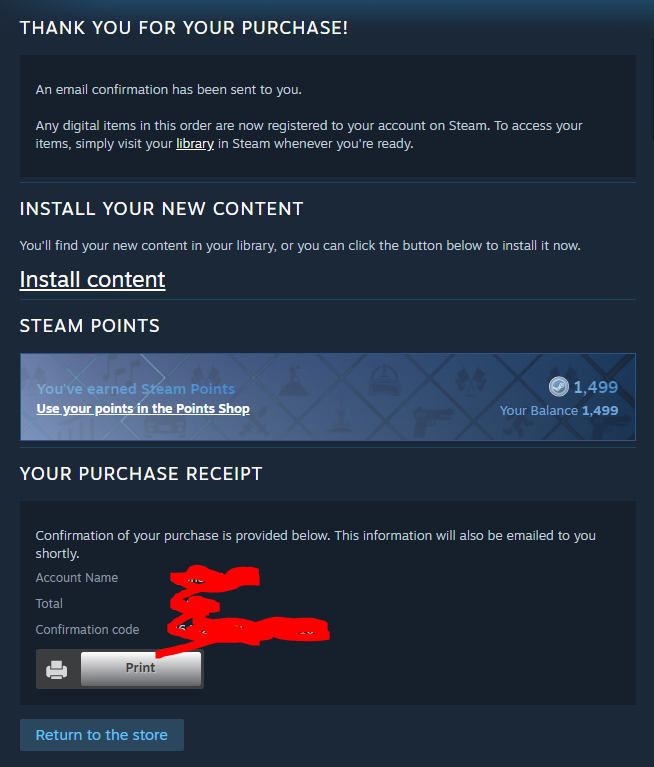 And just so you know, there’s a special 2-month Deluxe bundle with free Cartel Coins and free mount item on origin. This one is the best deal but you can only use it once every 6 months. 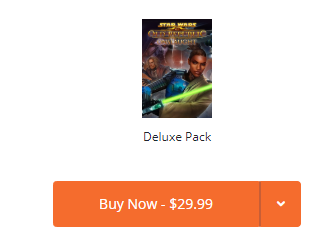 You can buy Cartel Coins on steam too. They are the same price on Steam. Note there is a “secret” $99 for 14,500 Cartel Coin Deal on SWTOR that’s not available on Steam. 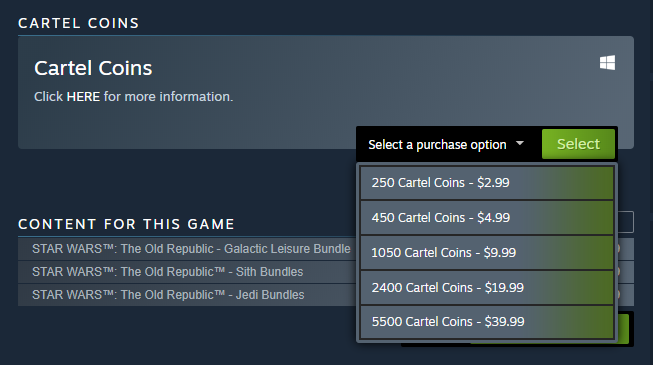 Buying SWTOR Subscription or Cartel Coins as a Gift on Steam

To buy a gift for a friend, they must have a Steam account (you do not get a code they can redeem like a normal gift card).

Once they are your friend, select the subscription or Cartel Coins you want to buy, then choose purchase as a gift on the next page. You will then be able to pick your friend from the list.

You’ll be able to send them a message with it. 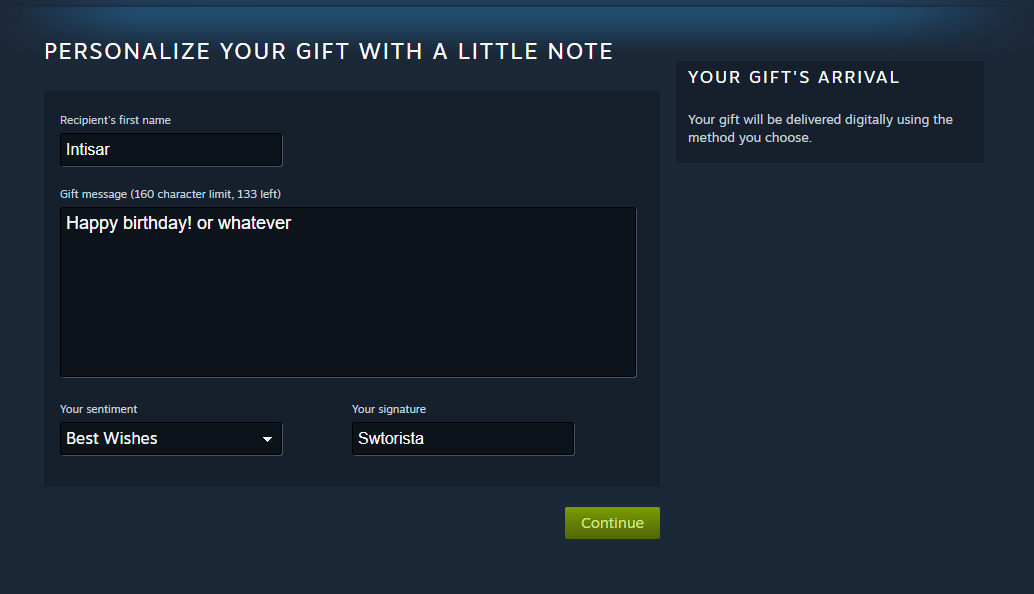 This will be sent to your friend: 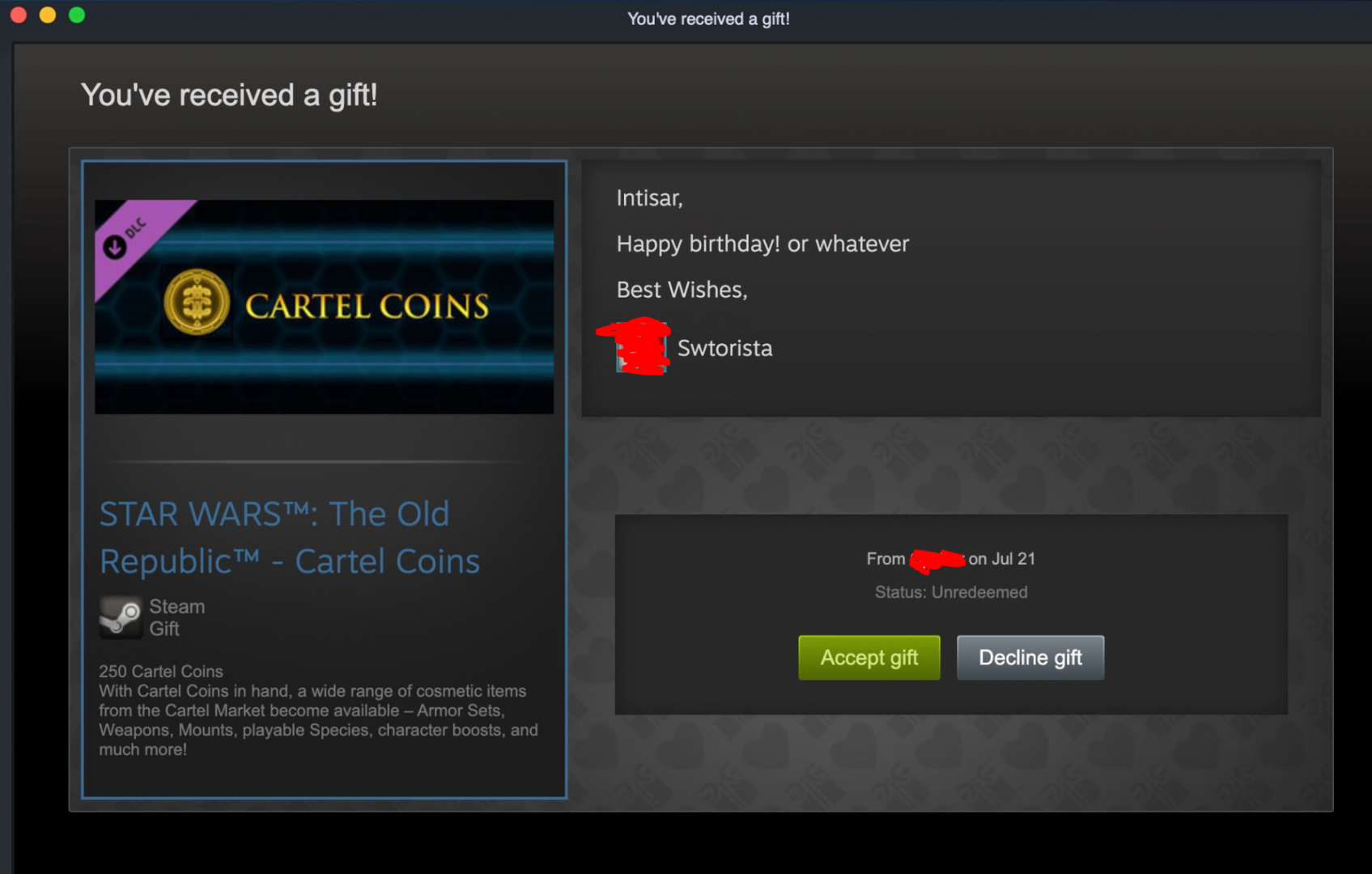 If they already have SWTOR installed and don’t want to re-install the entire game, prompt them to “play” the game through Steam, log in to the SWTOR launcher through steam, make sure their login goes through, and then they can exit that launcher before it downloads everything. They can then go log in how they normally play SWTOR and it should be applied to their account.

A majority of games on Steam come with cool and unique Trading Cards! These virtual cards, earned by buying and playing games on Steam, can be crafted into badges that grant Steam-related rewards. Star Wars: The Old Republic has a total of eight Trading Cards featuring notable characters like Darth Malgus, Satele Shan, HK-55, and others! Collect a set of cards to earn items (like emoticons and backgrounds) you can use to customize your Steam profile and account. Trading Cards, along with emoticons and backgrounds, can also be bought and sold on the Steam Marketplace.

You can earn up to three random cards through playing the game, and the other five you will need to obtain on the Steam marketplace from other players who got them randomly. Once you collect all eight, you have the option to craft them in to a badge for your Steam profile. (Note, I have eight hours logged in the game and I have not earned any cards yet. And the popup says cards are earned through spending money. So I’m not sure exactly how it works.) 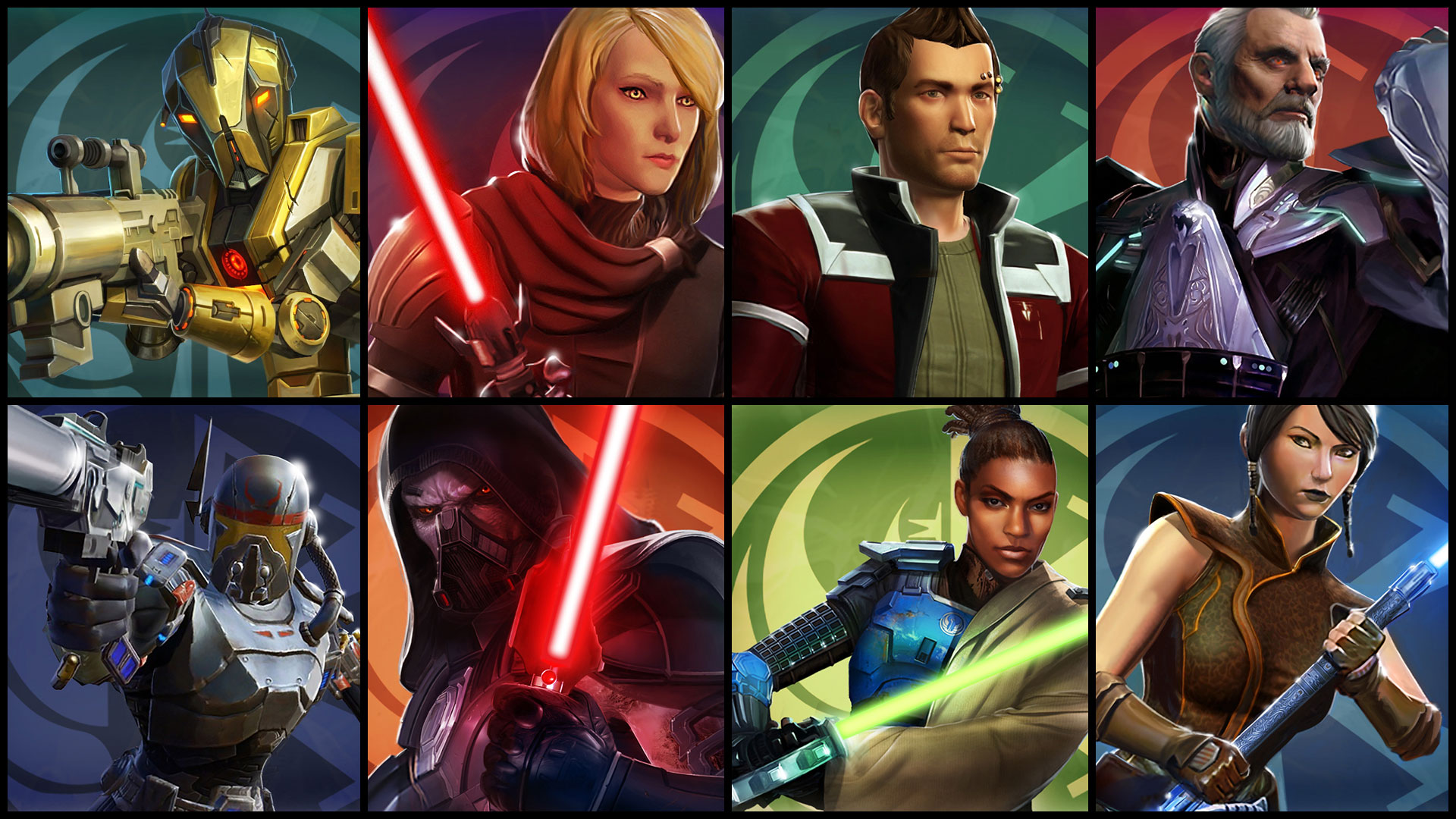 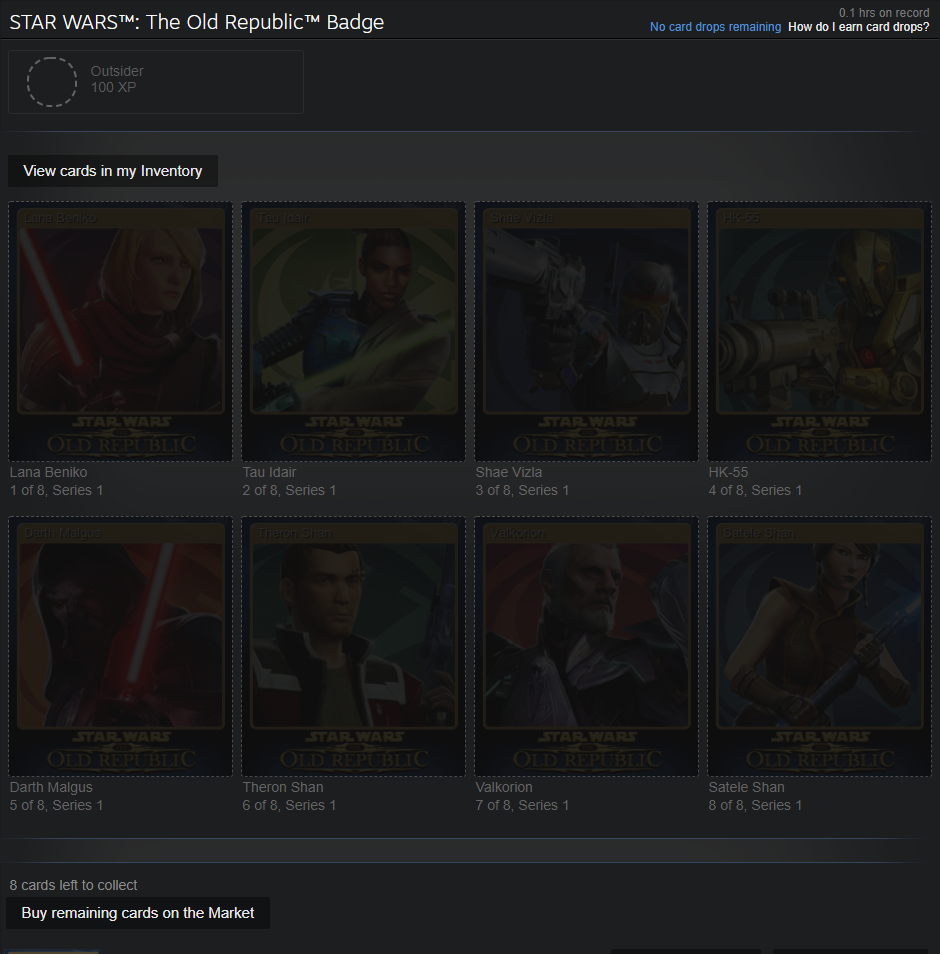 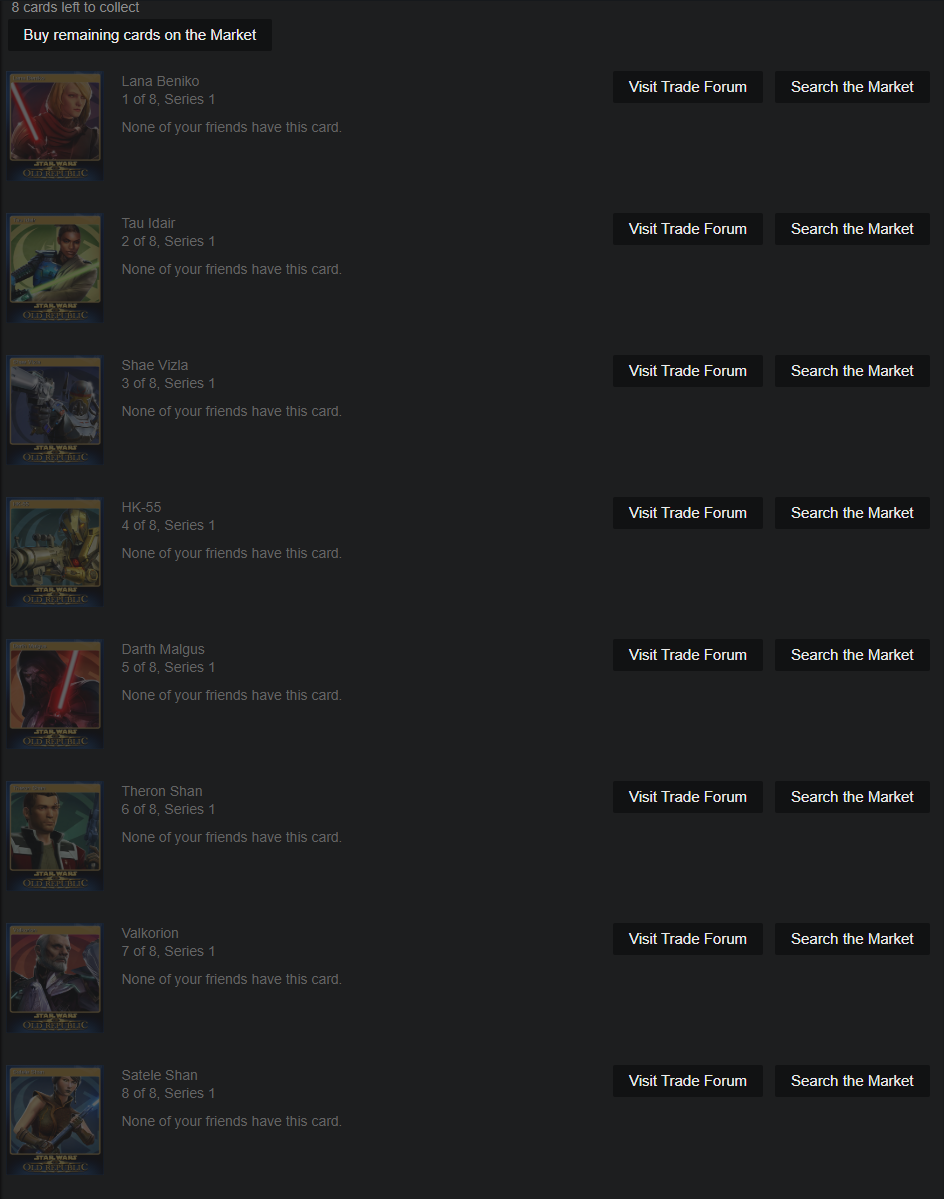 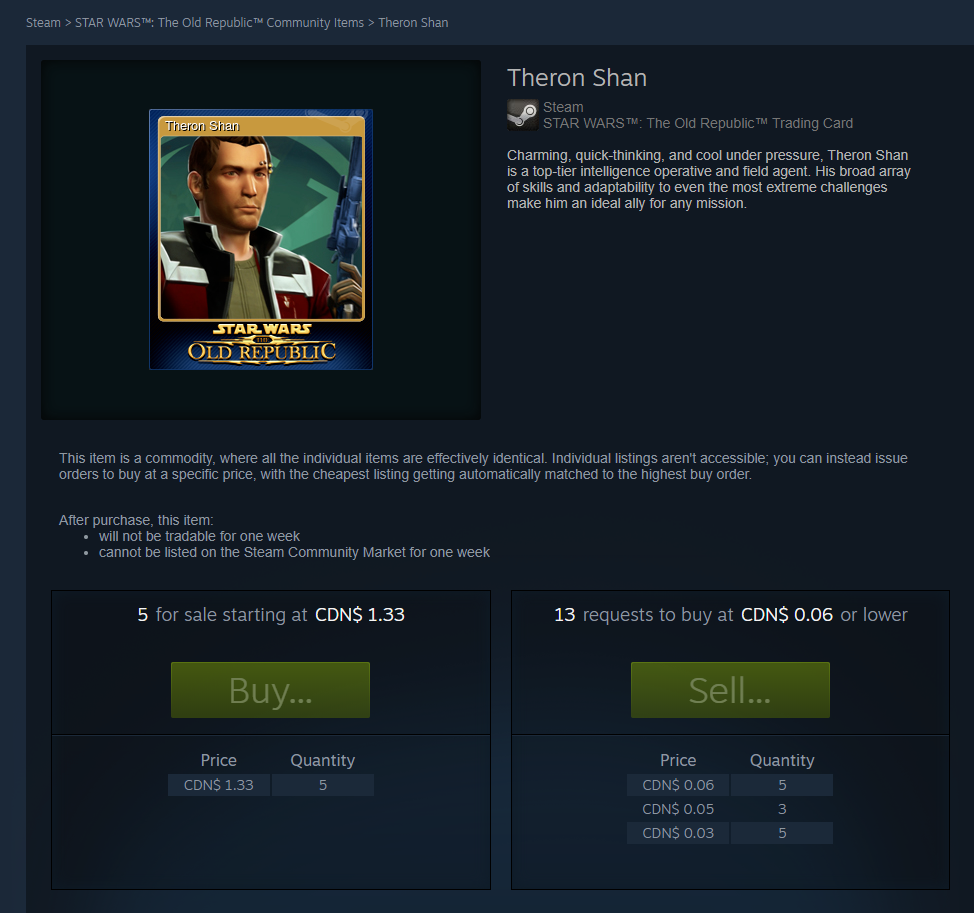 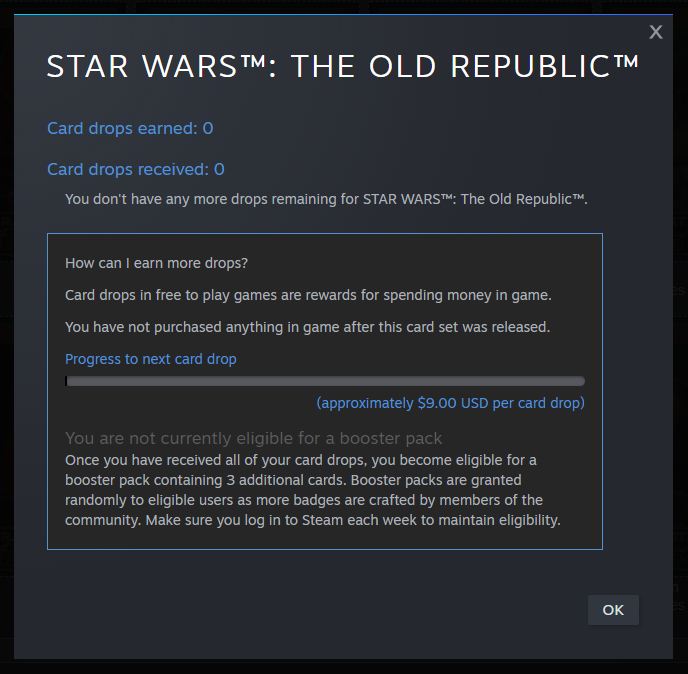 When you collect all eight SWTOR Trading Cards, you can craft them in to a badge. Badges show up as a small cosmetic icon on your Steam profile.

Here’s a little video by player Xenoanallagy that shows what that looks like to have collected all the cards and combine them together. This will consume your cards and leave you with an empty set. 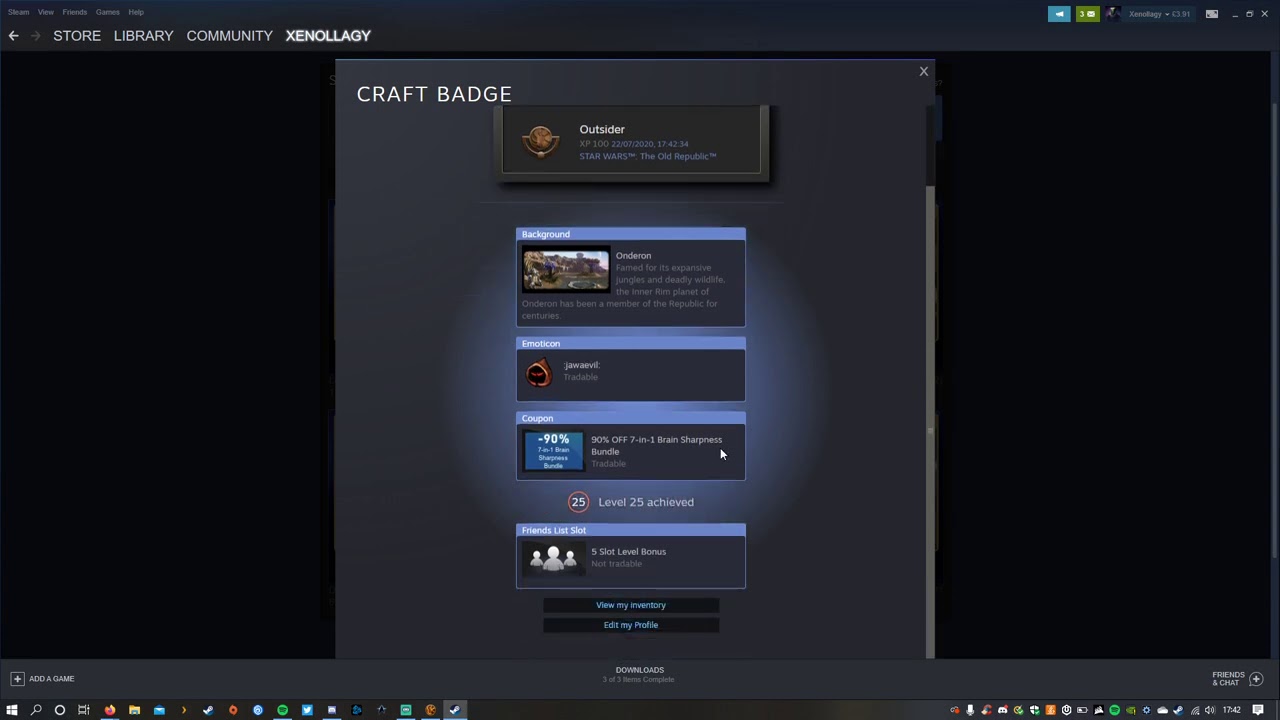 You also receive a background and Jawa emoticon. 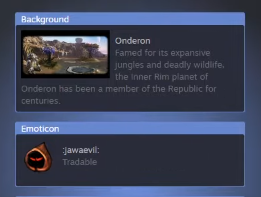 The first time you combine your cards and Craft with them, you will get the Level 1 Outsider badge and your cards will disappear. If you collect a second full set of cards, you can Craft with them again, and your badge will be upgraded, and you will get another random set of items like a Background and Emoticon. To upgrade your badge fully, you will need to collect 5 sets of 8 cards, for a total of 40 cards.

Emoticons are small symbols or pictures given to a user once they have crafted a badge, and they function the same way as the emoticons on the official SWTOR Forums. On Steam, there are a few basic emoticons that everyone can use, but most are only available if you own the emoticon. For The Old Republic, there will be a total of five Jawa-themed emoticons available to collect. To see which game-based Steam emoticons you own, you can check your Steam inventory page.

Profile backgrounds can also be earned when completing a SWTOR Steam badge. These are displayed on your Steam profile page and add an extra level of customization for your Steam presence. There will be a total of six unique backgrounds available to collect. If you have earned multiple backgrounds, they can be changed at your discretion.

With the addition of Star Wars: The Old Republic to Steam, we are excited to welcome new adventurers to a galaxy far, far away! May the Force be with you!