I’m very excited to share with you all the news we’ve learned about the end-of-the-year Star Wars: The Old republic update which will be patch number 5.10 and will be called Jedi Under Seige and is slated to be released in December. This update will be focused around a new storyline that will be leading up to the next expansion, which we think will be released some time in 2019. 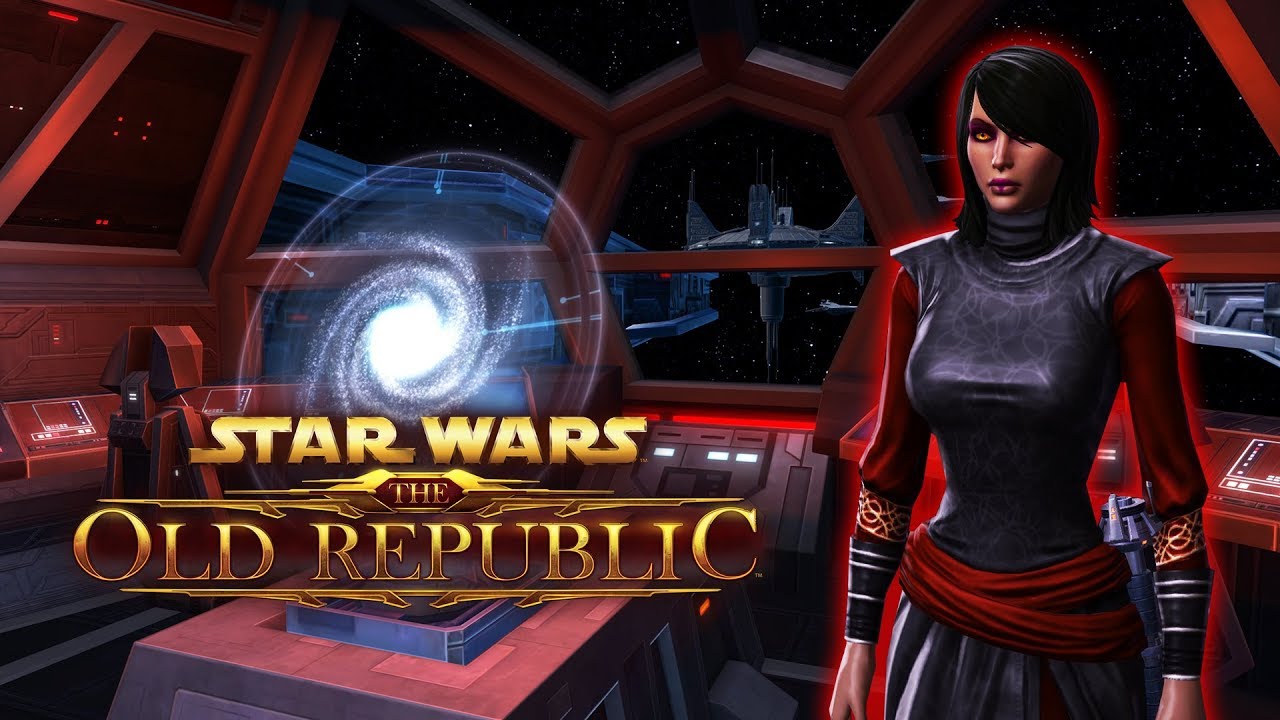 This next expansion will be focused around the war between the Republic and the Empire, and the new storyline kicking off in late 2018 will focus specifically on the ancient war between the Jedi and the Sith, on an ancient Jedi world that has been a part of Old Republic era stories in the past. Ravaged by a cataclysm centuries in the past, this beloved planet will be brought to life as a new Daily Area with separate Republic and Imperial storylines. If you’ve played the Iokath daily area, this new planet daily area ‘s story will be accounted for if you’ve supported the opposite faction in the past on Iokath, and players will be given some options moving forward because of their choice of faction in the past. The developers have described this new daily are as a big explorable area, where both factions will be doing their missions in a shared space, with worldbosses, a storyline that leads you into the daily area, and daily repeatable missions.

With this new planet, we will also see the return of several fan-favorite characters as well as the introduction of some exciting new characters including a powerful Jedi veteran who will join Republic players on their mission to protect a hidden Jedi base and a deadly commando who will aid Imperial players in their mission to destroy it.

The developers have been very coy, about the name of the new planet, but they did say it was featured in the the original Tales of the Jedi comic series, that it was ravaged by a cataclysm, and that players who were super savy on Old Republic lore could probably guess pretty accurately which plant it would be. There are multiple beloved planets mentioned and featured in the series, including Onderon, a planet tied to the ancient Sith Freedon Nadd’s story, Ryloth, the Twi’lek homeworld, and even planets we already have in Star Wars: The Old republic like Ziost, Korriban and Yavin 4. However, there’s only one planet that’s beloved due its lore, isn’t in the game yet, and suffered a great cataclysm in the past. That planet is called Ossus, which was an ancient homeworld of the Jedi. Update: It’s Ossus!

In addition to these fan-favourite and new  story characters, we’ll also be seeing more companions return in the story for characters who have started the Knights of the Fallen Empire expansion. These companions will be tied in to the new planet’s storyline, some more closely than others. 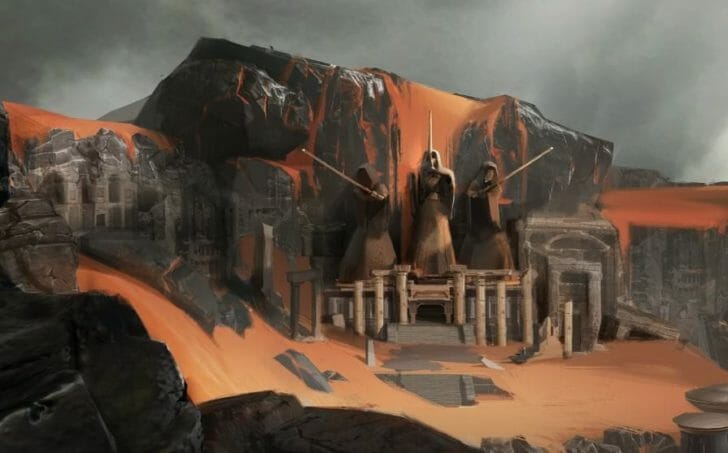 Ossus – devastated by the Sith hundreds of years ago, it has become an inhospitable, radioactive wasteland. Enshrouded by the Cron Drift, a nebula of detritus and barren rock left over from the explosion of the Cron supernova. This will be the new planet we visit in SWTOR 5.10.

In the new storyline in SWTOR, a group of Jedi who survived the war against Zakuul have chosen the remote planet of Ossus several years ago to establish a hidden colony where many Jedi have been hiding, in an attempt to rebuild the Order and to find their center after many years of warfare, and to rediscover what it means to be a Jedi and refocus their efforts on what is true to them. They have had this colony for about 5 years, establishing farms, reclamation efforts on the planet, to make the planet more hospitable to themselves and they hope to support many more. Naturally, this is not something the Sith Empire will allow. especially now that we are on the brink of war between the Republic and the Sith Empire once again. Now that the Eternal Throne and Eternal Fleet are out of the picture, there’s no one to stop the Republic and the Empire from going back to war, waiting to see who will fire the first shot. 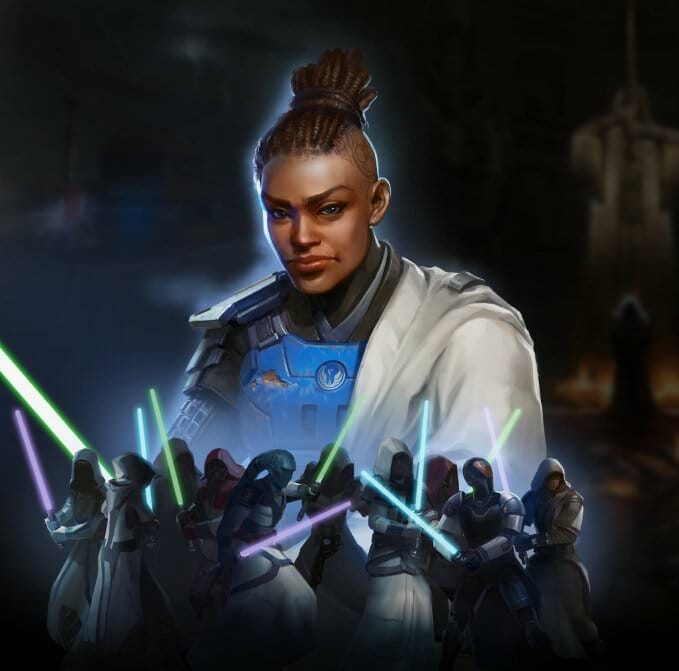 New character in the Jedi Under Siege update in 5.10 on the planet of Ossus! Her name is Tau Idair, her tattoo is an ancient symbol of the lightside. 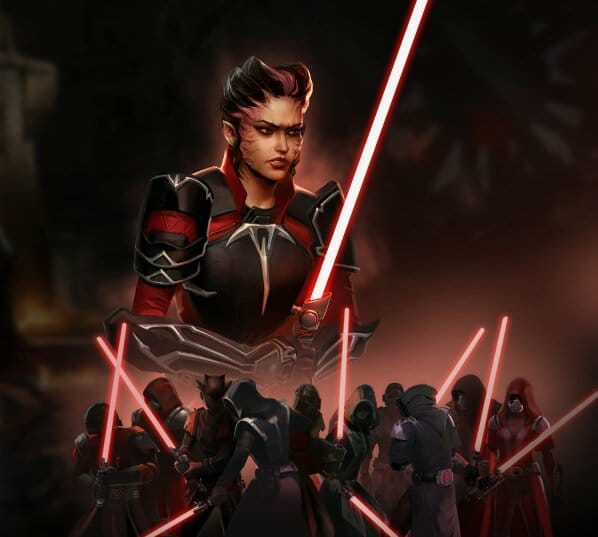 Returning character Darth Malora who will be in the  Jedi Under Siege update 5.10 – She’s a master of biotic science, on the Dark Council. She experiments with biology and Sith alchemy to use on the new planet of Ossus! If you don’t remember her – she is a young Sith on Korriban that is helping her master with Tukata in the wilds (not near the temple). 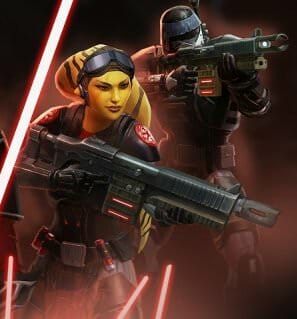 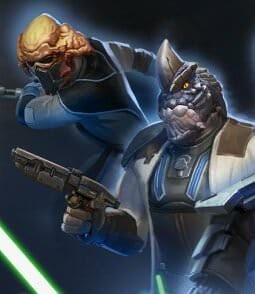 Master Gnost-Dural – Keeper of the Jedi Archives, first appearance ingame, narrator of the Galactic Timeline, he is in charge of the Jedi Colony and formulated the idea for it and developing it all these years General Daeruun – new species shown a few times, a Krex, recruits Republic players 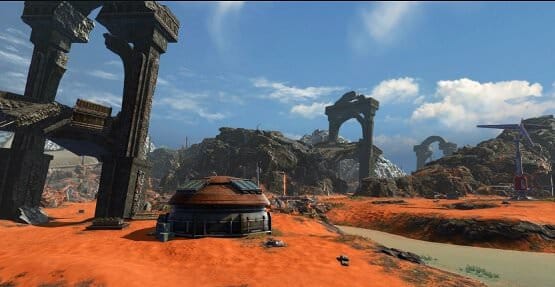 Ossus: From ancient ruins to the Great Jedi Library, explore Ossus, a beloved Jedi planet ravaged by a cataclysm centuries in the past. Decide your loyalities and choose to fight for your original faction, aiding the Sith or the Jedi in achieving ultimate victory, or secretly change your loyalties and undermine your former allies at every turn! Battle through intense re-playable daily missions for additional rewards.

For those who enjoy the most difficult operations in the game, the Master Mode for Gods from the Machine will be released with update 5.10. This is a bit of a surprise, as this operation mode was supposed to launch in the past, but was cancelled in favor of working on other content. Due to the difficulty of the story and veteran versions of this operation, hardcore players will likely enjoy the challenge it will bring. The team is also working to fix some of the bugs and issues in Story and Veteran mode Gods form the Machine.

For players who enjoy chasing the very best of the best when it comes to gear, or who are looking for a boost when it comes to the new operation or for getting through older ones, there will be a new tier of gear available. This Tier 5 Gear will only be available through crafting from rare schematics and new crafting materials. The intention of this gear is to receive it as a reward for participating in Master Mode operations, or working towards defeating master mode operations. The Galactic Command system will not be expanded in this update – it will still be capped at Tier 4 and Command Level 300, but it may be expanded in the future. Existing operations will not be returned to match this new tier of gear – this new gear tier is intended for progression players, but if you get ahold of Tier 5 gear it will make past operations easier to run. There will also be no class balance changes planned for the immediate future.

PvP players should keep their eyes open for the new Huttball match set on the industrial world of Vandin, which will be called the Skyshredder. This new pvp match will actually be released in update 5.9.3, before the big Jedi Under Siege update. (Update: It’s out!)

Players who enjoy spending time in their stronghold, especially roleplayers, will appreciate a new type of decoration being added to the game in update 5.10. These new holo disguise terminal decorations will allow players who interact with them to change your overall appearance of your character to look like a different type of character. These disguises can include fairly normal things like Republic soldiers or Imperial agent type of looks, or even more outlandish disguises like a hutt or an astromech droid. This update may come as early, as patch 5.9.3 with the new huttball map. These disguises are limited to strongholds, and are intended specifically for roleplayers in the game to broaden their options.

Players in guilds can now rejoice about the new guild updates coming in 5.10. These changes are something I am personally very excited about, and are part of the Developer team’s goal to add quality of life changes to every update.

Some of the guild changes and improvements coming in this update include:

With all these updates starting in mid 2018, the team has had a renewed focus on communication about what is coming up in the game as well as allowing more player testing on the Public Test server. The team did a fantastic job taking and enacting feedback in the last update for the Rishi Stronghold and Mandalorian Battle Ring PvP Arena, and it sounds like the team would like to provide this type of player feedback collection and changes in the future, especially for many of the upcoming changes. If you are a player who is subscribed to the game, you can download the Public Test Server, and will be able to provide feedback for updates like the new Vandin Huttball arena, the Gods from the Machine master mode, and the new guild progression system. If you’d like to help test the new content and provide feedback before it goes live, I’ve added a link for how to access the public test server and the link to the forum to provide feedback on in the description of this video.

And that’s everything that’s coming to the 5.10 Jedi Under Seige update! I’m very excited for the new storyline that should be on the planet of Ossus, and I’m looking forward to seeing the new guild changes, the new huttball map, the new master mode operation and of course the fun roleplay disguises. I’ll see you all ingame for update 5.10 as we work our way towards the expansion, and as always, may the force be with you!