There’s quite a few ways to earn credits in Star Wars: The Old Republic, and lots of wonderful things to spend them on. In this video, I’ll be going over ways to earn credits for players who have reached max level and are subscribed – as credits come slow at lower levels, and free to play and preferred players have a credit cap.

This guide is an updated version of a previous guide, and focuses specifically on ways to make credits in the 5.0 Knights of the Eternal Throne expansion. If you are interested in viewing this entire guide in all it’s glory, the PDF version was originally written by SWTOR VEGA.

SWTOR_VEGA’S GUIDE: “How to Make a Ton of Credits Playing Star Wars: The Old Republic”

Heroics are one of the simplest ways to earn credits. The easiest way to pick up the heroics is too access the terminal on the fleet and pick up a whole bunch. You can either try to pick some of the fastest ones, or just pick up a couple planets worth at a time. Don’t forget, all these heroics can be very easily traveled to – once you pick one up, you can press the quick travel icon beside the quest’s name in your quest log. There’s 70 heroic quests available, and you can do each one once per day per character. If you want some easy CXP, you can also pick up a single planet’s heroics from the galactic command panel.

Doing all 74 heroics will earn you about 1.6 million credits, and that doesn’t even include any items you pick up and sell, bonus quests, or the credits from the alliance crates if you have completed chapter 9 of Knights of the Fallen Empire. Add on to that the materials you can buy with the jawa scraps from the alliance crates, and the credits you get for each level of your alliance growth from the commanders datapad, and you’ve get a recipe for quick credits.

If you have friends to run with, adding additional players to your quest gives you a bonus to the credits you earn.

[Update: Another user reported you can earn up to 2.8 million credits by doing all the heroics!]

If you’d prefer PvP over heroics, both player vs player combat and galactic Starfighter can be fairly lucrative. You’ll earn credits from completing matches, and a chunk of credits for completing the dailies and weeklies. 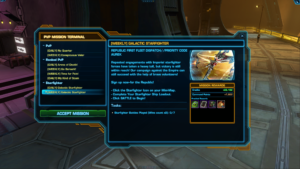 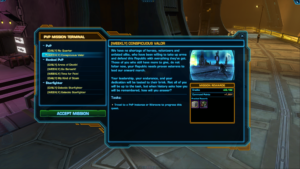 The two PvP dailies and the weekly grant 17,000 credits each, the daily GSF quest nets you 14,000 credits and the GSF weekly gets you 22,000. On top of that, both the daily and weekly ground PvP quests have a chance of dropping some rare crafting materials including a Refined Isotope Stabilizer which is worth 100 thousand credits, or a rarer crafting material called Void Matter Catalyst which is worth about 200 thousand credits at the time of making this video. The weekly quest reward has a higher chance of dropping the rarer purple material than the daily quest reward.

If you’re looking for something to do between matches to make credits, running heroics or gathering materialsis a pretty good option.

If you are already doing things like heroics, PvP or flashpoints, you’ll want to make sure you are adding the weekly conquest to your list of credits goals. Co quests are a way for guilds to compete against each other on a leaderboard – but you can also participate alone. If you participate while in a guild that makes the top ten leaderboard that week, you will get double rewards if you complete your personal conquest goal!

Guide to how Conquests Work

To view the conquest objectives for the week, you can open the conquest panel by clicking the conquest tab on your quests panel. The objectives are on the left. Some objectives can be done infinite times, others can only be done once per legacy. Your conquest goals can be completed on multiple characters for multiple rewards.

If you participate solo and meet your personal conquest points goal, you get…. 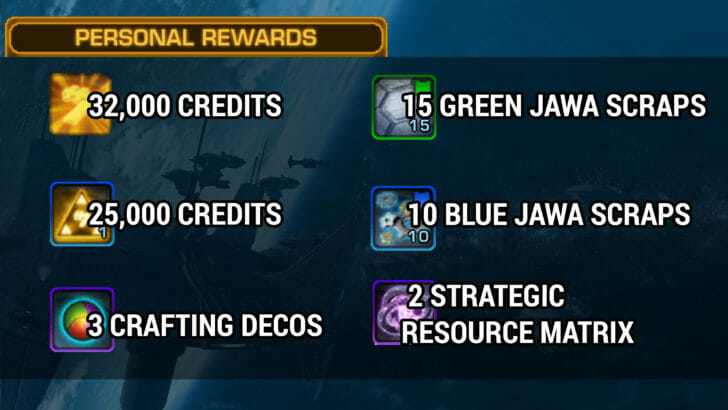 If you participate with your guild, and your guild makes the top ten, you’ll also get… 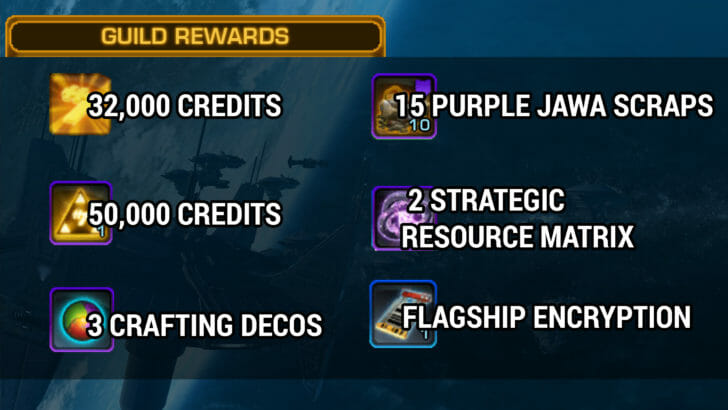 Even if you just participate solo, just the rare crafting materials alone will net you at a minimum about 1,000,000 credits per week!

If you have Slicing, Scavenging, Archaeology, or Bioanalysis as a crew skill, you can gather materials in the wolf to sell to other players who will use them for crafting.

If you’re gathering grade 8 mats, Yavin 4 has the most nodes. If you are gathering grade 9 materials, the Zakuul swamp, Zakuul Break town and Darvanis from Chapter 14 of Knights of the Fallen Empire have plenty. Grade 10 materials can now be found on Iokath. Even lower level materials can sell fairly well on the GTN, because other players buy them to craft for conquest. If you are willing to play the long game, you can even store your crafting materials and wait to sell them on a conquest week when the objectives revolve around crafting… That way, guilds buying materials will drive up the prices during that week!

While you are running around gathering materials, don’t forget you can also send your companions out on missions to gather materials​ too.

If you are running into other players who gathering, you can try switching instances by opening your map and selecting another instance from the drop-down on the bottom right.

If you have a character that can craft, you might also want to check out the price of components versus the price of raw materials on the GTN. It might be worth it to craft them into components and then sell them.

Other items players sometimes craft to make credits include: tier 3 and 4 schematic armor, augments, augment kits, dyes, reputation dyes, decoration prefabs and finished decorations. All of these items highly depend on the current state of the market – so make sure to do your research on the GTN before crafting!

Between heroics, PvP and gathering there are some pretty solid ways to earn credits, however players that are billionaires most often do something known as “playing the GTN”. This is when players carefully watch the GTN and the market, and buy and sell items based on what they’ve seen, instead of earning credits through quests in the game.

A simple example of playing the GTN might include watching for players posting items at low prices, buying them, and reselling them at the normal price for a quick profit. Another example might be buying armors from other players when a cartel pack first comes out and the supply is high… And then holding on to them for 6 months and selling them for a profit when the supply is low. These types of credit-making tactics require two things… Knowledge of the average prices of items, and the patience to make credits over time. Some players who focus on making credits as a hobby even hop between servers to find good deals, and to take advantage of the different markets. Each server’s GTN is a bit different, based on the servers population and the types of players on that server.

Items that players flip are usually cartel pack items, including armors, mounts, emotes, color crystals and decorations. Players usually pick one or two areas of expertise and focus on them, so they can get familiar with the prices and the market.

Before I go, I’ll leave you one last tip about making credits with cartel coins. Subscribers get 500 per month, and even free to play players can get 100 cartel coins per month if they use a security key. 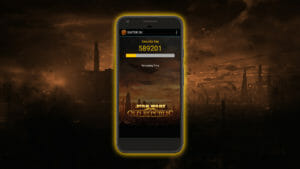 If you are a subscriber, you might want to convert these cartel coins to credits. Due to a recent re-structuring of the Cartel Market (it looks different than the screenshots below, and more items being constantly available on the Cartel Market), there are no constant items for sale that are an “easy buy” when it comes to converting cartel coins to credits. Instead you have to be a savvy shopper and see which ones have a good value of cartel-coins-to-credits on the GTN – a good place to start might be whatever items are for sale on the first page for the cartel market, either limited-time featured items or items on sale. 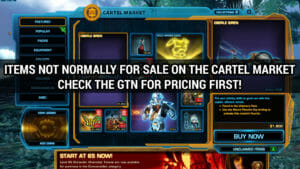 Just make sure to check the GTN for the credit value before buying- to find out what item will get you the best value, look up it’s lowest price on the GTN, then divide that big number by the number of cartel coins it costs. So for example if an item can be sold for 2,000,000 credits on the GTN, and costs 1,000 cartel coins, you get 2,000 credits per cartel coin spent. The item with the high let credits-to-cartel-coin ratio will likely give you the most profit – just keep in mind prices on the GTN fluctuate, and it may be harder to sell some items than others. 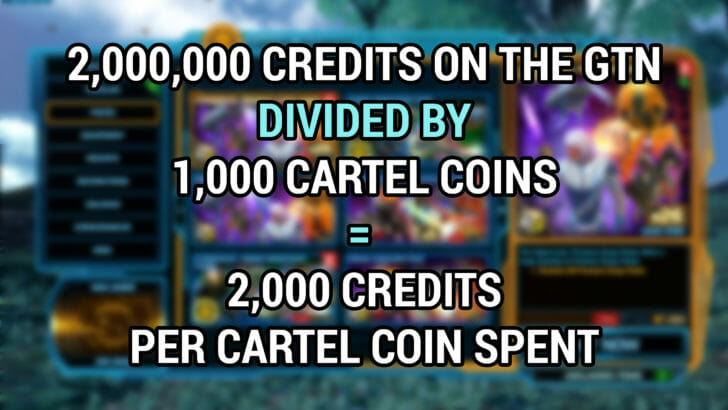 Subscribed to SWTOR in the past, but haven't been referred for 90+ days?

Use my referral link to sign up and get a FREE Preferred Friends Bundle and 7 Free Days of Subscription! Great if you want to get back in the game or haven't subbed in a while!