I’m a new player who’s got a character to 70, done with the story for now… but what else is there to do? What do I do now?

If you’ve just gotten into the game or used a level-up token in Star Wars: The Old Republic, there are four main things you can do after you’ve finished the main story line and have reached level 70: PVE, PvP, leveling and collecting.

This is an overview guide of the basics of everything you can do to give you a taste… it’s by no means extensive! 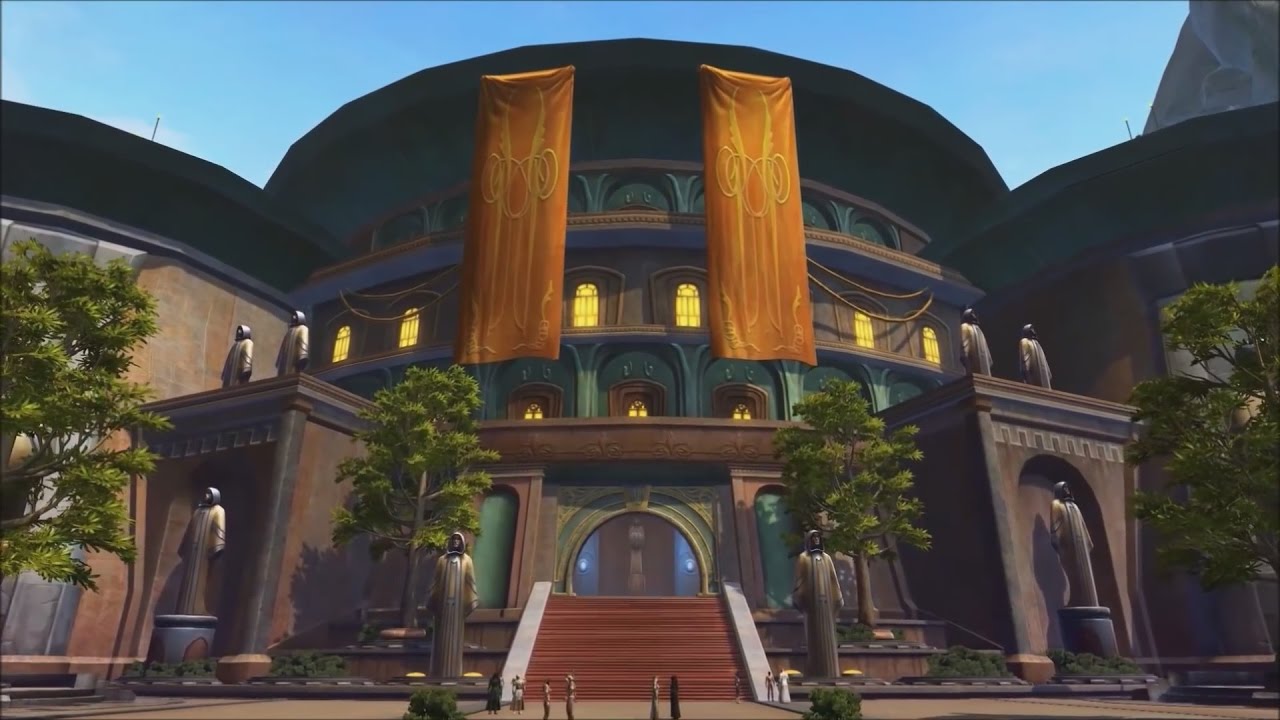 PVE is anything you do against the computer – not against another player. The two main group PvE things you can do once you hit level 70 are flashpoints and operations. 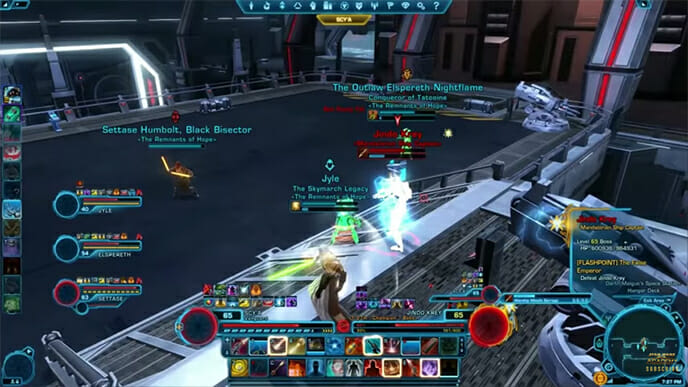 Uprisings are very similar to flashpoints, except that they’re more fast-paced and have less story attached to them – there’s no cutscenes, and the time between bosses is very short. 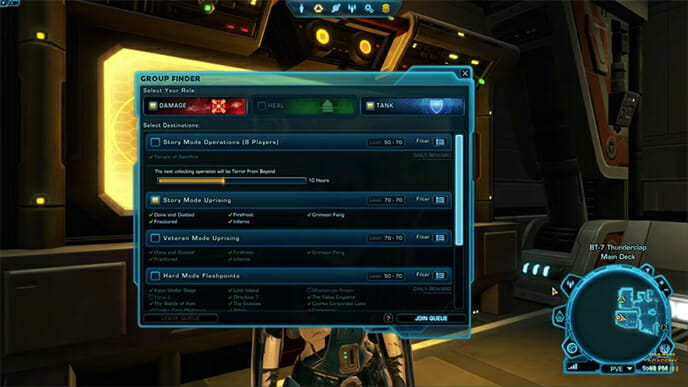 If you want to start getting into flashpoints, you want to make sure you have at least a piece of gear in every slot, and you can jump into them by clicking the icon of “three little people” near your minimap. On that panel you can sign up for tactical flashpoints or story uprisings if you’re new to group content – hardmode flashpoints and and veteran uprisings are more challenging than the tactical versions and require more gear and experience.

Once you’ve chosen which type of flashpoint you want to do, you can queue up and you’ll get paired up with three other people and the main thing you need to do is just follow everybody else and watch chat and make sure to pew pew things

Operations are a lot harder, and they’re also more difficult to get into. They’re eight man groups that you work with seven other people and you each have a very set role to do – you do damage, or you’re a tank, or you’re healer.

You can queue up for these the same way as flashpoints with the group finder – but the more common way to get into them is to watch chat, usually on the fleet, and look for groups that are looking for more people to join in. 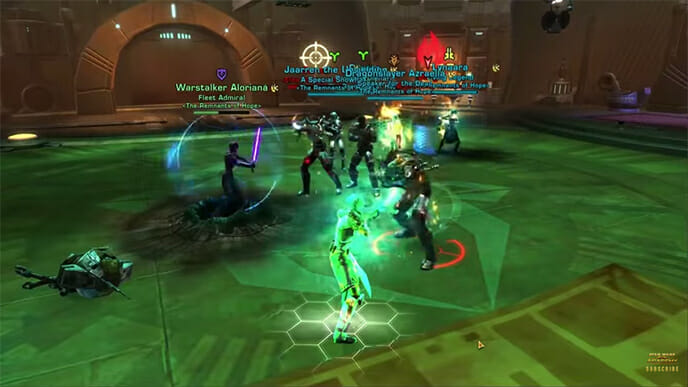 Don’t be too intimidated to join these – there will be some people who are really rude and not willing to help, but at the same time there’s going to be people who are really willing to help. One of the best ways you can get into operations if they sound cool to you, the big eight-man content in the game, is to look for a good guild on your server that’s taking in newbies. 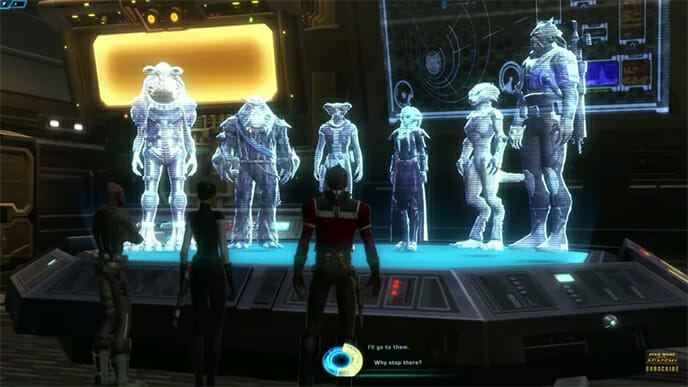 If you enjoy PvE content but like to play more solo, there’s lots of quests you can complete.

Each planet has its own planetary quest line you can complete, a lot of the flashpoints have a solo version you can walk into or get a random one from the galactic command panel, there’s Star Fortresses that you can do once you finish Knights of the Fallen Empire chapter 9, there’s the Eternal Champion fights you can do after you finish chapter 9 and do some of the alliance alerts, and of course the alliance alert quests themselves that help you gain a whole bunch of new companions.

If you’re looking to explore more of the open world and earn credits you can try doing all the Heroics which can be picked up from the heroics terminal on the fleet, or you can do a random planet’s heroics through the galactic command panel. 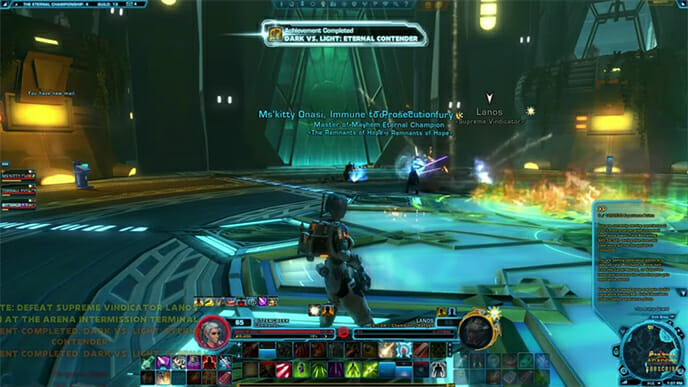 Eternal Championship – solo or with friends

If you’re looking for a really different style of gameplay, you can also try space missions – you pick them up on your ship, and you get to fly your ship and save space stations that are under attack by the enemy and fly through asteroid fields.

With the new Galactic Command panel, it’s easier than ever to see what activities you can hop into at level 70. Press CTRL+G to open the Galactic Command Panel, or choose Galctic Command in the dropdown menu under the icon of a quest triangle. From this menu you can jump right into the story chapters, flashpoints, uprisings, operations, warzones, starfighter, and heroics. Everything in this panel, as well as a few other quests around the world, also help you gain galactic command points which will eventually turn into level 70 armor you can wear.

There’s no end of activities you can check out when you hit level 70, and I recommend you try out each one of them at least once to see if you like it.

PvP is a game of war where you’re actually fighting other people in the game. And to hop into that is pretty easy – just click the icon of a Republic or Imperial symbol near your minimap and choose  ‘queue solo’. This will try and match you up with other players for a warzone.

The only thing you really need to know is that other than killing other people, there are mechanics that you pay attention to in the matches. Some of them are: you guard the door, some of them you have to capture the node, and some of them are pure deathmatches,

If this is your very first time PvPing, just type in chat “this is my first time, is there any tips for this war zone or anything I need to watch out for?”

There’s also a different type of Player vs Player content called Galactic Star Fighter. You jump into your a space ship and fight battles against others in space with your team.

Leveling is something else you can do if this is your first character. There are eight distinct classes in the game: there’s four on Republic side and four and on imperial side, and the initial leveling content in the game is very very unique to each class – so if you’ve played a Jedi Knight and you want to go play smuggler, that’s going to be a very very different story and you definitely want to see all eight of them at some point in your life.

If you don’t want to start up a new character but want to try out some story content you’ve already played, but in a more difficult setting, both the Knights of the Fallen Empire and Knights of the Eternal Throne chapters can be played on a harder difficulty! You can get to these replayable chapters in the Galactic Command panel.

The last one is the one that many players don’t know about. Once you’ve hit 70, I definitely recommend go and check out the leveling, the PvE, the pvp, but if you’re not really into those things and are more shy or quiet, rather do things on your own by yourself, or like to fill up bars, like to collect things, like to see what secrets are in the game – collecting is what you’re going to check out.

There’s reputation, and you can see your reputation by opening the legacy panel up in the menu it looks like a little shield in the dropdown menu under the icon of a character – and you just click on it and click reputation and there’s a whole bunch of different groups you can gain reputation with by doing certain quests or certain heroics or some of them only happen during certain parts of the year but you get some really cool rewards if you rank up your reputation with them.

Of course there’s all other types of things you can collect: there’s mounts, there’s emotes, there’s colors crystals and of course hundred of outfits and weapons. Just pick what you’re interested in and start working towards it. If you need money, you can always do heroics and start saving up.

If you’re more interested in collecting useful things rather than cosmetic ones, crafting might be right up your alley. You can start crafting in the stronghlds and crew skills section of the fleet and you can pick one crafting skill, and two gathering skills. You can gain materials through gathering with gathering missions or picking up materials around the galaxy, and you can get new schematics from your crafting trainer, and from galactic command crates.

If you really want to get into it, there’s also role playing as well – you just need to find the right people to do it with. Roleplaying is a way of creating a story with others outside of the stories already in the game, and you aren’t constrained by things like level or class!

Want to learn more about SWTOR?

If you’re interested in learning more or trying out any of the things I’ve mentioned in in this video, I’ve created 40+ videos that are part of a video collection – The Academy, a series focus on the basics of Star Wars the Old Republic. I’ve made videos on roleplaying, getting cool armor, reputation, operations and flashpoints, crafting, pvp, levelling and more. I’ve even covered ‘what to do at level 70’ – so you can listen to me read this article to you, and watch clips of all the cool stuff you can do in the background!